We know that financial problems can create tremendous stress. If you need help, please call us.

A native of the LaGrange, Illinois, Brad graduated from Lyons Township High School and then received his Bachelors of Science degree from the University of North Alabama where he double majored in Business Management and Political Science. While there he was elected and served as president of the Student Government Association during both his junior and senior years. He thereafter attended Cumberland School of Law at Samford University where he was awarded a Juris Doctorate degree. Prior to commencing legal practice, Brad served one-year clerkships each with the United States Trustee for the Northern District of Alabama, Billy J. Rivers, and United States District Judge for the Northern District of Alabama, E. B. Haltom, Jr. Brad is a principal of each of the Bond & Botes law offices which are located in Alabama, Mississippi, and Tennessee. Brad is licensed to practice law in Alabama, Mississippi, Tennessee and Illinois. He is also admitted to practice before various United States District Courts, the United States Court of Appeals for the Eleventh Circuit and the United States Supreme Court. A member of the National Association of Consumer Bankruptcy Attorneys  since its inception, Brad has served as a member of its Board of Directors and as its first full time Executive Director.  He has lectured on various bankruptcy topics to local and national gatherings of bankruptcy attorneys, trustees and judges. Brad has been named as a Best Lawyer in America,  a Birmingham “Top Lawyer” by B Metro magazine and has earned a Superb Rating of 10 by Avvo . While not practicing law, Brad has served as a member of the Board of Directors of the Big Brothers Big Sisters of Greater Birmingham, the Crisis Center of Birmingham, the Alabama Head Injury Foundation and the Alabama Coalition against Rape.  He currently resides in Birmingham, Alabama with his wife of 30 year, Kaye. 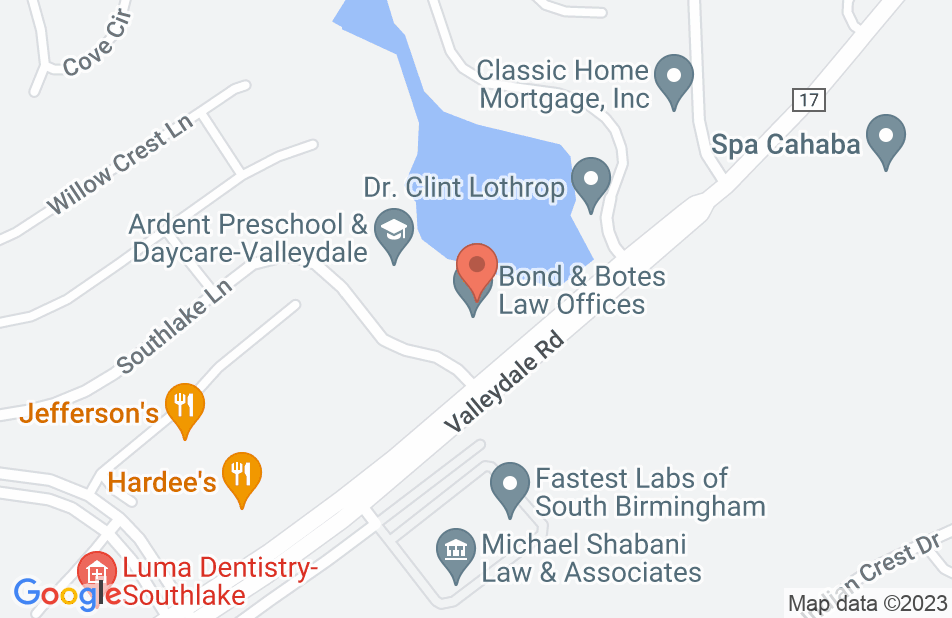 Brad Botes has given me hope that I can recover from the financial hole that I had dug myself into. He explained each step of the process and followed up with me to make sure I was staying on track. He shows a genuine concern for his clients financial well being.

Everyone goes through tough times in their life and Bond & Botes took care of my needs and concerns. They did a great job of making sure that I knew exactly what was going on with a process I was very unfamiliar with. The things they told me would happen, happened and that is reassuring when you have to rely on someone else to walk you through a process like bankruptcy and debt relief. I would highly recommend their services to anyone that thought they needed to talk to a professional. Check out their website at www.bondnbotes.com.

Mr. Botes gave me excellent advice regarding my case! He is very knowledgeable and compassionate! Mr. Botes took his time and explained the law to me regarding my case. He went above and beyond to me. I will forever be grateful to him! Thank you, Mr. Botes, for keeping me calm during such a stressful time in my life! I highly recommend him to anyone in need of an Attorney!
This review is from a potential client who consulted with this attorney.
Consulted attorney

Brad represented me in a very complex bankruptcy lasting for several years. During the period I was never in the dark, always informed in detail and professionally. The matter ended as I was informed. During the time he represented me Brad and I shared many conversations regarding life and family. Alas, not only is Brad an excellent attorney but a wonderful, caring father and husband.
This review is from a person who hired this attorney.
Hired attorney

I love this company. They have helped me every time I've gotten myself in a bad financial situation. They are all very nice and do what they can to help. I wouldn't choose any other lawyer.
This review is from a potential client who consulted with this attorney.
Consulted attorney

I had some financial issues that I tried to handle on my own. Unfortunately, they slowly began to snowball into something I couldn't take care of. After talking to my attorneys, it was such a relief to know there was help for me. Some debt collectors can cross the lines with harassment and threats. I'm truly grateful for the compassion at this company and relieved I have peace.

OMG. I have known Mr. Botes professionally since the mid-2000, and he never ceases to impress me both professionally and personally. He's at the top of him game, and I believe you'd be hard-pressed to find a more knowledge, caring, authentic and results-oriented counselor.

Brad Botes was worth every cent I paid him. Left with dignity in tact.

From from moment I contact his office, I was treated with respect. I had no idea what to expect and was overwhelmed with the compassion and caring. I appreciated the straight forward honesty that he displayed. I appreciated the orderly manner in which everything is done. His experience is evident from the beginning until the end. He knows what he is doing and he does it well. You are literally walked thru a process that could be awkard and embarassing in a manner that leaves you with the feeling that you still have a bright future ahead of you. He is nothing from honest from beginning to end. His associates are also easy to work with. They answer "stupid quetions" without making you feel they are. I can only say good things about this experience. He stands with you throughout the process and tells you what to expect ahead of time. He is the so very thorough and gave me nothing but good advice.

I highly recommend Bradford Botes if you are in need of an excellent consumer debt attorney. I was being sued by a junk debt buyer. He laid out my options for me and helped me make an informed decision. He kept me informed at each step of the case, which was eventually dropped by the plaintiff without ever going to trial. If you are in this situation, please do not hesitate to contact Mr. Botes.

If you are looking for the best!

Mr Botes is very knowledgeable and will keep you informed every step of the way. He and his office made the process as easy as possible. He was always prompt at returning phone calls, e-mails and voice mails even when he was out of town.
See all reviews

Truly exceptional and professional attorney with an outstanding reputation in the legal field for providing high quality representation and results for his clients! I highly endorse this Mr. Bradford

I strongly endorse Brad Botes for any legal issue regarding bankruptcy or debt reorganization. Mr. Botes has led Alabama's consumer bankruptcy practice, and is passionate about helping his clients regain control of their finances. I personally know Brad to be very knowledgeable in all aspects of bankruptcy, from the initial consultation through complex litigation, he does a superb job!

Mr. Botes is one of the most exemplary and extraordinary attorneys that I have encountered in 24 years of practice. Despite being a judge, magistrate, prosecutor, and private attorney for nearly two and a half decades, I continue to learn valuable information from his posts every day. I would highly recommend.

I endorse this lawyer. Brad is smart and sharp. I have discussed legal issues on a regular basis with Brad and found his level of expertise as extraordinary. Brad is a top bankruptcy lawyer and a true client advocate

I endorse this lawyer. Based upon his answers to questions posted on Avvo, Mr. Botes is highly knowledgeable, always willing to answer questions, and I always learn something from his responses.

I endorse this lawyer. Brad is one of the few consumer bankruptcy attorneys I know with a national reputation. He is active in NACBA, knowledgeable about bankruptcy law and how to run a consumer practice.

Brad is an excellent attorney. He is committed to his clients, the development of the profession and the law and I wholeheartedly endorse him.

I endorse this lawyer. I have known Brad for many years, seeing him at seminars across the country, keeping his knowledge at the cutting edge of the law, in order to service his clients. Which he does while upholding the highest ethical standards. You cannot go wrong hiring Brad.

I've known Brad for over 15 years. He is an excellent lawyer and wonderful person.

Brad is an excellent bankruptcy lawyer with a passion for helping people in financial difficulties.

Oliver Gardner, Bankruptcy and debt Attorney on Oct 4, 2012
Relationship: Worked together on matter

Brad is one of the top consumer bankruptcy lawyers in the United States and a great friend and person. I fully endorse him.

Barbara May, Chapter 7 bankruptcy Attorney on Oct 4, 2012
Relationship: Worked together on matter

Brad is first and foremost a gentleman. He is extremely bright and professional and a pleasure to work with. I have seen him in difficult conditions that would provoke any other person, but his kept his cool and got his work done. I could not recommend him more strongly.

James Johnson, Bankruptcy and debt Attorney on Apr 7, 2010
Relationship: Worked together on matter

I endorse this lawyer's work. I have known members of Brad's firm here in Mobile for many years and I am aware of his experience and reputation as a fine Bankruptcy attorney. He is one of the leaders in the Bankruptcy bar and has trained and supervised some of the best Bankruptcy lawyers I know.

Brad is a fantastic consumer protection and bankruptcy attorney. I have known Brad for probably ten years now and I have never doubted his ability or his integrity. If you are looking for a bankruptcy lawyer, I highly recommend you contact Brad.