A tireless advocate for his clients, Jason Studinski has earned a reputation as one of Wisconsin and Stevens Point’s most respected lawyers.

In 1998, Jason graduated from the University of Wisconsin Law School as a member of the Moot Court team and a published author. Ever since he has been tirelessly representing Wisconsin victims in accident, injury or neglect cases where they have been wronged or injured unjustly.

A tireless advocate for the forgotten, the abused and the victimized, Jason does more than simply handle cases. He has written numerous articles and lectured in the United States and Canada on nursing home abuse and neglect and other issues relating trial advocacy. One of Jason's goals is to share what he has learned to help lawyers across the country better represent their clients. Jason approaches his clients and his cases with an open attitude and a caring heart. He believes that lawyers win for their clients primarily because they listen, understand and discover the compelling story of the case. The client, not the lawyer, is the central figure.

In his time away from work, Jason enjoys spending time with his wife and two sons. His hobbies include hunting, dog training, fishing, canoeing, hiking and reading. Jason and his family live in Stevens Point, Wisconsin. 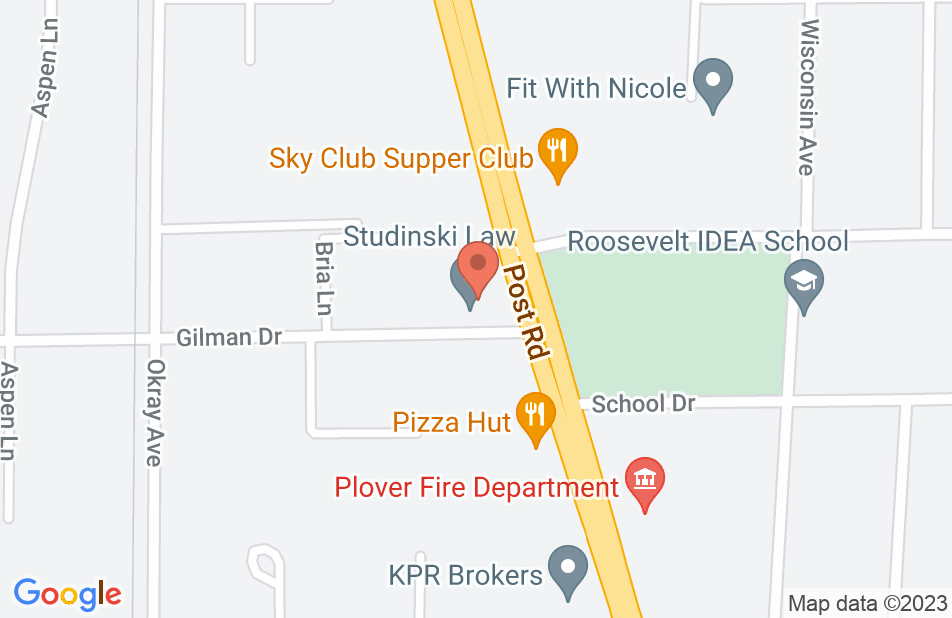 Not yet reviewed
Review Jason Studinski

Jason is a valuable asset to this community. His dedication to the law and his clients is admirable.

Jason is a hands-on attorney, who does an excellent job for his clients. I fully endorse this attorney.

I recently attended a lecture Jason gave. The same thing happened during his speech as happened when I saw him speak before. I simply could not record the incredible number of valuable insights he shared fast enough to keep up.

Jason is a gem. He is the kind of guy who fights for his clients and makes a difference. He is the "go to" choice in his area.

Excellent, compassionate and wonderful lawyer. I endorse this lawyer.

Jason is an outstanding trucking attorney and I recommend him without hesitation. He is also uniquely qualified when it comes to proving damages in large cases involving catastrophic injuries. Jason stands among the best of the best trucking attorneys in this country. I'm glad to know him.

Mr. Studinski is knowledgable and has the experience necessary to provide his clients with exceptional representation. I have no hesitation endorsing him.

Mr. Studinski is generous enough to share his legal knowledge on sites like Avvo. Apart from being kind, he is also a passionate, intelligent, and skilled attorney. I endorse this lawyer.

I endorse this lawyer wholeheartedly, he's smart, capable and knows how to win. I wouldn't hesitate to refer an injury client to him.

I highly recommend Jason when a client of mine needs a personal injury attorney. He's an excellent attorney, and has taken good care of every client I've sent his way.

Jason has a reputation of being a vigorous advocate for his clients. He is a top-notch lawyer.

I endorse this lawyer. Mr. Studinski's knowledge and experience make him an excellent choice for anyone looking for an attorney practicing in this area.

I have observed Mr. Studinski to invest significant time providing free legal advice to those in need in this forum. His advice is clear, concise, and honest. I endorse this lawyer.

I have read many of Jason Studinski's answers in the personal injury section of Avvo. His answers are insightful, well-reasoned, and helpful. He is an asset to the Avvo community.

I always enjoy reading Mr. Studinksi's sage comments on AVVO. He is a top notch attorney with an impeccable reputation.