After years with a well known firm I decided to hang my own shingle so I can serve my clients with the attention and fairness they deserve.

I graduated from Columbia University in the City of New York and then attended law school at the University of Cincinnati.  I was admitted to the Bar in November of 2007 and, after a short time with the Monmouth County Prosecutor's Office, I started my career as a family law attorney.  I have since opened my own practice so that I could fully institute my own model of client representation.

While up to five percent of the lawyers in the state are named to Super Lawyers, no more than 2.5 percent are named to the Rising Stars list. 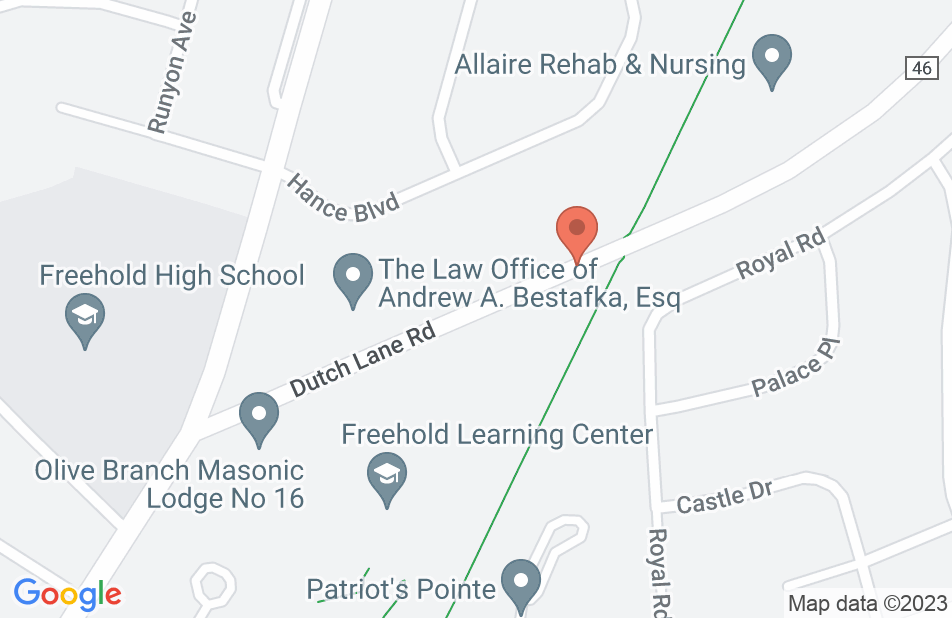 The Law Office of Andrew A. Bestafka, Esq.

Andrew is a very trusted lawyer with great personality who helped me in the worst time in my life when I was going through my divorce he is very intelligent in his field ,him and his staff provided excellent service, demonstrating professionalism and person attention to all details of my case
This review is from a person who hired this attorney.
Hired attorney

I interviewed several lawyers before choosing Andrew as my divorce attorney. He is straightforward and precise pertaining to your rights as a spouse. He advocated on my behalf to get me the best and fairest settlement so I could begin my life again. I found his website very helpful in answering many questions, and I would highly recommend him.
This review is from a person who hired this attorney.
Hired attorney

Andrew was referred to me by a friend and I could not have been more pleased. Even thought he was located 40 miles away from my hometown, he always made it simple for us to meet. Meetings were always short, too the point and costs were always kept to a minimum. In the end, I was very happy with the agreement he reached for me and would highly recommend him to anyone in the future! Thank You Andrew!
This review is from a person who hired this attorney.
Hired attorney

Andrew Bestafka helped me during the most difficult time in my life. Through his patience and knowledge, both my ex and I were able to come to terms that we both felt comfortable with. I highly recommend him. DP
This review is from a person who hired this attorney.
Hired attorney

I hired Andrew Bestafka for a problem with my ex-spouse not paying for our kids' shared college expenses. He handled the case very well, and I won! He has great communication skills and is very responsive.
This review is from a person who hired this attorney.
Hired attorney

Andrew Bestafka is a class act!

I hired Andrew as my divorce lawyer on the spot. I felt so comfortable and confident with him that never had to consult with other lawyers. During the worst time of my life , I had Andrew by my side to walk me through the divorce process with confidence and knowledge. He is a brilliant man and will help you every step of the way!!
This review is from a person who hired this attorney.
Hired attorney

Andrew is a great lawyer. He is highly intelligent and extremely well versed in his area of expertise. He handled my matter as if it were his own. Very highly recommended.
This review is from a person who hired this attorney.
Hired attorney

From the day I stepped into his office, I felt like he truly wanted to help me get the best care I can. Andrew managed to keep me informed and in good spirits, even at the worst times of my divorce process. A true professional that I wholeheartedly recommend.

Andrew basically helped me take a very bleak situation and turned into a positive, fair result and I'm very pleased with my decision to retain him. My case was very complicated, with many variables, yet he handled them all, at an expert level. I had gone through (2) two previous lawyers, who basically failed me at every turn. They will remain nameless, but I assure you that they left Andrew with a difficult task. I can also tell you firsthand, that the NJ justice system, as it pertains to divorce, is daunting at best. If you're like me, getting through life in business, financial obligations, sporadic intervals of sadness/depression, not to mention caring for the children and juggling/spinning 20 plates at once, you will need a competent lawyer through this time. The whole process is overwhelming and I thought the case would never end. Andrew spent time understanding each situation, honing in on what's truly important, while leaving/placing the emotion (although, empathizing with it) to the side. He got me results! Favorable results! Undoing the previous mess left by the other attorney's. He handled the case with professionalism. Every time I called or emailed me, on each occasion, he got back to me right away and made me feel like his only client. I would recommend him to anyone who is going through a divorce, complicated or not...The best.

Recommendation and Review for Andrew A Bestafka

From the beginning to the end of my case Andrew was a true professional. Upon meeting Andrew and his staff I immediately felt comfortable in their presence and felt we were on the same page with my matters. Andrew’s openness and forward thinking on my case made the entire process uneventful (A very good thing to have while being extremely busy) and with little interruptions along the way. I have recommended Andrew and his staff’s professional expertise to colleagues, family, and friends. He has a knack for making you feel comfortable, assured, and most importantly--to hold a firm client/lawyer trust relationship. As a client you will appreciate his respect for timeliness, and accomplishing tasks with quick resolve. Once again, I am grateful for Andrew’s expertise, timeliness, and easy going attitude. I recommend his services with the upmost regard. Sincerely, J. Longoria, MBA
See all reviews

(58)
Are you an attorney? Endorse this lawyer

Andrew is an extremely hard worker and a fierce advocate for his clients. I've known Andrew for several years and he's a well respected lawyer in the community. I strongly endorse this lawyer.

I endorse this lawyer. Andrew is very experienced in family law and has a great depth of knowledge. He is not afraid to fight for his clients.

I endorse this lawyer. Andrew was impressive in his knowledge of the law, his compassion for his client and his willingness to be reasonable in settling a difficult matter. We were able to help our respective clients settle at a great saving to them and both were happy with the result. I have referred clients to Andrew and will continue to do so in the future. I believe he does an excellent job for his clients.

I highly recommend and endorse this lawyer.

I endorse this lawyer. One needs a lawyer with a heart when getting divorce advice.

I endorse this lawyer. Very skilled and knowledgeable when it comes to the law.

Andrew Bestafka gets the job done; he's respectful. He does not string out cases or litigate unnecessarily. But he's aggressive when need be. I recommend him highly.

I strongly endorse Andrew. Highly respected in the legal community with an outstanding reputation for client advocacy and dedication.

Mr. Bestafka has demonstrated a high level of knowledge and ethics in this very prickly area of the law. it is a minefield and I would recommend him very highly to anyone in need.

I wholeheartedly endorse Andrew, he has the knowledge and experience, plus the compassion necessary to help his clients through a tough time.

J. Shumaker, Divorce and separation Attorney on May 19, 2014
Relationship: Fellow lawyer in community

Mr. Bestafka is one of the top Family Law attorneys in New Jersey. I endorse him without reservation.

Jared Adams, Divorce and separation Attorney on May 19, 2014
Relationship: Fellow lawyer in community

I endorse this lawyer. Mr. Bestafka is a well respected lawyer in the legal community.