Welcome to the profile of Robert Louis Miller, an attorney at Robert Miller and Associates, and have been practicing since 1995 in the areas of DUI Defense and Criminal Defense.  The purpose of this brief bio is to give you some information about Robert and his background.

Thereafter, he worked for several years as an associate at a large criminal defense firm in Orange County, where he learned how not to run a law firm (nugget: yelling at associates doesn’t make you a better partner), and obtained trial experience with jury trials all over Southern California.

He lectures frequently to his young son on a variety of subjects. He enjoys being on boats, despite the painful memories.

In the years since the above bio was published, Robert has received many bemused queries, often pertaining to the state of his health. To limit future inquiry, here are answers to some of the more frequently asked questions:

Robert is also a published author with articles in newspapers, national magazines, and a printed encyclopedia entry authorship, and has handled over 100 trials. 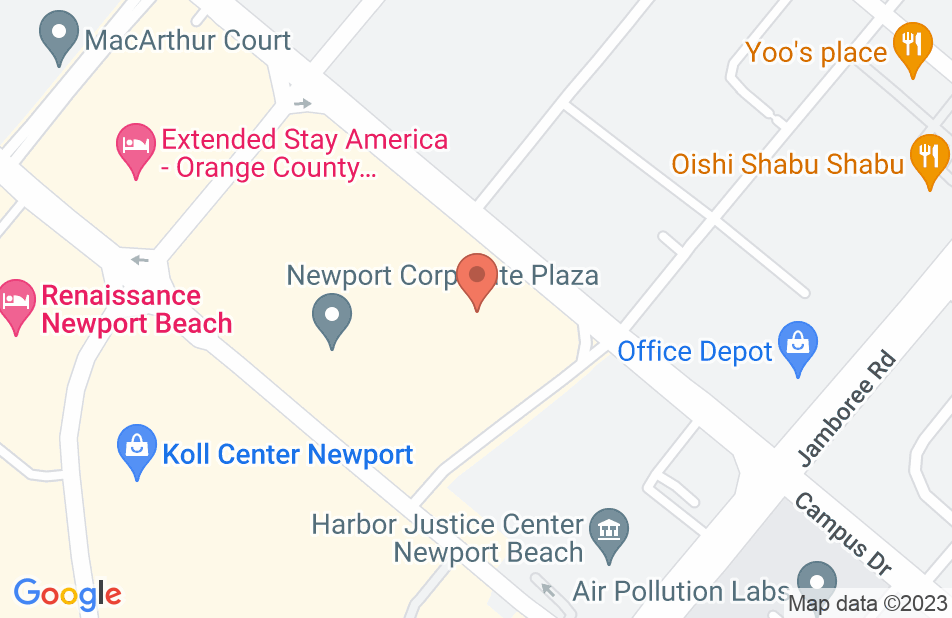 Thanks for a smooth experience with a difficult matter!

Robert and his team were excellent to work with, even through the hardships of a pandemic. He was very communicative and patient with me from the beginning to the end as we waited for the courts to open up and finally settle our matter. He has lots of experience and answered any questions (small or large) I sent his way. Highly recommended!
This review is from a person who hired this attorney.
Hired attorney

We cannot begin to express our gratitude to Robert Miller. My ex-husband was arrested for a DUI. All we could think about was how this could destroy his life (he faced a potential termination of a 15 year career) and impact our son. I found Robert Miller and spoke to him on the phone. What struck me was how quickly he responded to my request for a call, and his professional demeanor and thoughtfulness. We later met him in person to ask him more follow-up questions. In a time of incredible uneasiness and anxiety, he did a great job of keeping in contact. He always answered our emails and calls, and kept us informed of the case’s developments. In the end, he delivered our highest expectations. He successfully got dismissed both the DMV case AND the criminal case. He is a fantastic attorney who understands professional client service and works your case with as much dedication as you can hope.
This review is from a person who hired this attorney.
Hired attorney

Best DUI Lawyer This side of the Mississippi

Words cannot explain how happy I am with my outcome! My experience with Robert was remarkable. He took the time and energy to radically look into my case. Researching all the angles possible to prove my innocence. Other lawyers just take your money, and want you to prove guilty with the minimum sentence but Robert went above and beyond for me. His professionalism, and perseverance was outstanding. I highly recommend him. He is top quality! Unfortunately, few of my friends that had DUI’s in the past hired lawyers that didn’t care, and only took their money. Choosing Robert as your lawyer will not only give you peace of mind, but will save you thousands of dollars. Thank you, Robert.
This review is from a person who hired this attorney.
Hired attorney

I'm from out of state and was charged in California back in 2011. Mr. Miller represented me very professionally and everything was handled while I was back home and I am pleased with the results. I have needed documents a couple of times since then, and he has been very helpful and quick to respond.
This review is from a person who hired this attorney.
Hired attorney

I wanted to say thank you for helping to resolve my case quickly. I was completely dazzled by your communication skills and courage at the court hearing.
This review is from a person who hired this attorney.
Hired attorney

I am profoundly grateful for Robert Miller's outstanding representation. Mr Miller shared thoughts about my case even before I was technically his "client", and he offered a much-appreciated military discount, so I knew he cared more about people than money. Vigorously fights for the client! Negotiated with everyone involved to obtain best options available. Always well prepared. Provided expert guidance through a confusing legal maze so I always knew my case status and what to expect next. Incredibly prompt communication - very candid and straightforward, yet consistently positive and reassuring. Honored my request for email rather than phone due to raw throat. Extremely nice and very pleasant. I recommend Mr Miller's law firm in the strongest possible way and I will not even hesitate to contact them when I need a lawyer. Fabulous representation for their clients!"
This review is from a person who hired this attorney.
Hired attorney

Responded to all my questions quickly, helped with every aspect, got the outcome that I wanted
This review is from a person who hired this attorney.
Hired attorney
Robert Miller's response: Thank you so much for your input regarding our representation in your legal matter and case. It was our pleasure to help you obtain the dismissal outcome that you were looking for from the beginning. All the best to you.

I highly recommend attorney Robert Miller. In difficult situations, Mr Miller is confident and knowledgeable of all legal options and the court system. He promptly answered all of my many questions 24/7. He will present you with options and advise you accordingly. He achieved an excellent outcome in my case, therefore I would not hesitate to recommend Robert Miller to my friends and family.
This review is from a person who hired this attorney.
Hired attorney
Robert Miller's response: Thank you for your comment on our professional services in your case. It was my pleasure to keep you updated and answer your questions and go over the options in your case. All the best to you.

I'm pleased, relieved and comfortable with the way my case was handled and know that it would have had a different outcome had Mr. Miller not represented me. He was knowledgeable, prompt and very patient with me and the details of my situation. He made sure I was aware of every aspect and understood the court system, since I'd never had any experience before. I would hire Mr. Miller again and highly recommend him.
This review is from a person who hired this attorney.
Hired attorney

I truly could not have asked for a better experience. Robert Miller was there at every point to guide me through the process. He has a calm and confident demeanor. I am not from the area, and I had no knowledge of how the court system works. Robert patiently explained the entire process to me, laying out all the possible options and advising me which would be most beneficial. He promptly answered my phone calls and emails, even on weekends! His knowledge of the justice system was remarkable. With it we were able to achieve the best possible outcome for this complicated case! I would recommend Robert Miller without hesitation to my friends or family should they need any legal advice.
This review is from a person who hired this attorney.
Hired attorney
See all reviews

Robert is one of the most knowledgable attorneys regarding DUI. He knows about all aspects of DUI including the DMV side. Robert also is one of the nicest attorneys in this community. He takes his time to help other attorneys as well as his clients. I had the privilege of working for Robert prior to becoming a lawyer myself. I wholeheartedly endorse Robert- he is one of the best DUI attorneys in California and the only one I feel comfortable referring clients to.

Mr. Miller is a very knowledgeable and experienced attorney. I endorse this lawyer.

I highly endorse Mr. Miller. Very experienced and caring attorney who produces great results in representing clients! I want all people with legal problems to contact him first.

Bruce Dizengoff, DUI and DWI Attorney on May 7, 2015
Relationship: Fellow lawyer in community

I endorse this lawyer. Robert Miller is a knowledgeable attorney, and a zealous advocate on behalf of his clients. He is well respected in the legal field.

Keen attention to detail and exceptional client service. One of the best DUI attorneys there is. I endorse this lawyer.

I have known Robert for over 17 years and would recommend his services to those who need an experienced and tenacious legal counselor.

20 years of practicing criminal law is very experienced. His knowledge of both the law and procedure is excellent and evident in his pro bono contributions. His numerous client reviews are stellar. READ THEM. Do yourself a favor if you are in or near Newport Beach and schedule a consultation.

A. Felsen, DUI and DWI Attorney on Dec 13, 2014
Relationship: Fellow lawyer in community

I endorse this lawyer. Robert is great! A real asset to the Avvo community!

I endorse this lawyer. No one has more endorsements by fellow attorneys, which says it all. there is no more experienced nor hard working in the field. www.duiking.com. 40+ years

I've read many of Robert's responses on AVVO. His responses demonstrate he is knowledgeable, thoughtful and concise. I recommend Robert without any hesitation.

Howard Roitman, DUI and DWI Attorney on Jul 10, 2012
Relationship: Other

Anthony Rao, DUI and DWI Attorney on May 8, 2012
Relationship: Other

Attorney Miller is an excellent advocate for his clients, and his mastery of the DUI/DWI Law in California is top-notch. I endorse him as a great advocate, and lawyer.

I endorse this lawyer. Attorney Miller's thoughtful answers to Avvo legal questions demonstrate not only a superior grasp of the law but also an outstanding level of client commitment. A first-rate attorney whom I would not hesitate to recommend.