Experience and professionalism when you need it. Aggressive and compassionate advocate for you.

Mr. Bowen has more than 30 years’ experience as a trial attorney primarily, and now exclusively, in the area of domestic relations law to include divorce, custody, visitation, child support, spousal support, equitable distribution, military pension cases and the division of government and myriad other retirement plans.

He is appointed by the Chief Judge of the Fairfax County Circuit Court as a Neutral Case Evaluator and has been designated by the Court as a Judge Pro Tempore in certain divorce cases. He served three terms as an arbitrator on the 19th Judicial Circuit Committee on the Resolution of Fee Disputes for the Virginia State Bar. He is an active member of the Fairfax Bar Association and has been designated as a Circuit Court conciliator. Mr. Bowen is also involved as a member of the Family Law Section of the Virginia State Bar and Fairfax Bar Association. Mr. Bowen was recognized by Northern Virginia Magazine as a Top Lawyer for 2011, and has received the honor of an AV® rating by Martindale-Hubbell by peer review.

Mr. Bowen has been an active member of the Ex-Partners of Servicemen/Women for Equality (EX-POSE) for nearly 20 years. He has been a frequent speaker for EX-POSE and the Women’s Center on issues of military benefits, pension rights, the Survivor Benefit Plan, division of property, child custody, child support and the collection of child support. He has also lectured at Continuing Legal Education seminars sponsored by the Virginia State Bar and the Fairfax Bar Association.

Mr. Bowen is admitted to practice before: 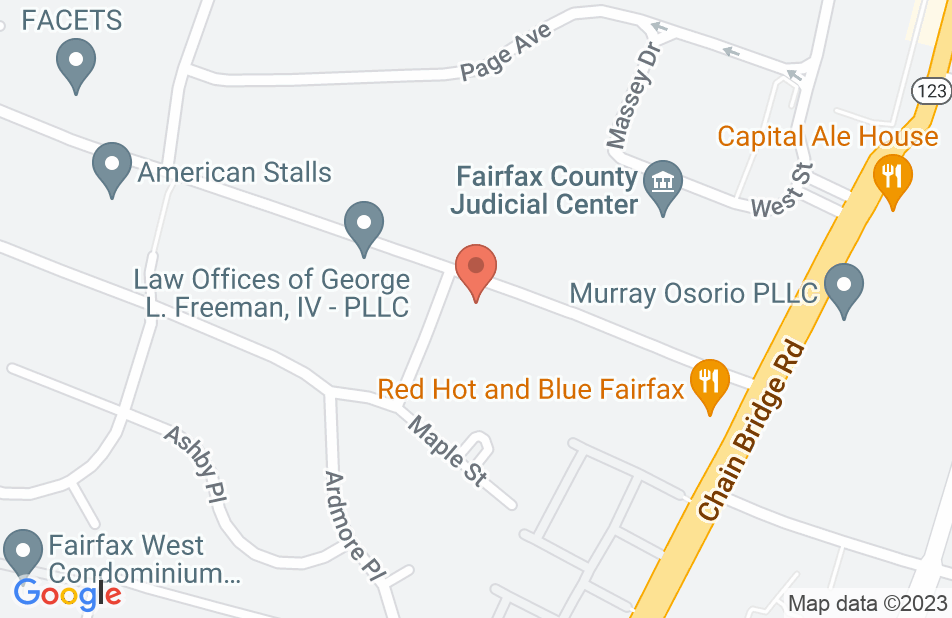 In and Out of Court in a Matter of Minutes

Divorce is sometimes awful and tricky, but Mr. Bowen was amazing at navigating me through this tough process. What I thought would be a simple divorce took a few crazy turns, and we ended up having to go to court. Mr. Bowen had all the paperwork ready to go and presented the case in less than 4 minutes. The judge even applauded Mr. Bowen for the most thorough and efficient divorce filing he'd ever seen in all his years, decades as a lawyer and now as a judge. While divorce itself stinks, having Mr. Bowen and his office on my side was a delight and constant comfort through it all. They were always very quick to get back to me, when I sent emails and voicemails with questions, and able to explain the game plan, so I had an idea of what to expect at each step in the process. Mr. Bowen was recommended to me by two friends who used his service in their divorces, and I too cannot recommend him highly enough. While I hope to never need a lawyer in the future, Mr. Bowen will be staying programmed into my speed dial just in case.
This review is from a person who hired this attorney.
Hired attorney

I was going through a same sex divorce and a friend recommended Larry Bowen to me. I called him panicked about the possibility of losing my daughter because I wasn't the biological mom. Mr. Bowen listened to my fears, gave me sound advice (for free) over the phone and said "don't worry, come to my office and we'll figure this out." I was in a same sex marriage and was frankly hesitant to go to Larry. To my surprise, Larry was well versed in the complexity of a same sex divorce. He gave me sound advice, he was honest, and frank. I can't thank him enough and I will recommend Larry any day of the week.
This review is from a person who hired this attorney.
Hired attorney
See all reviews

I endorse this lawyer. Larry's been an opposing counsel of mine on several cases, and is an excellent attorney. He is a strong and diligent advocate for his clients, but is also honest and reasonable to work with towards getting the case resolved.

Larry and I have been adversaries in court. I found Larry knowledgeable, responsive, professional and very skilled. He is a great advocate for his clients and I endorse him highly.

Larry Bowen is regarded as one of the best attorneys in his field. Through his expansive career of over 35 years he has received numerous accolades and awards for his work. His immeasurable knowledge of the law combined with his courtroom experience make him a very effective litigator. It is no wonder why he is so well-respected by judges and fellow lawyers in the community. Mr. Bowen has a very approachable personality that fosters great relationships and long-term bonds with his many satisfied clients. I have referred Larry individuals who need excellent representation because he can handle the toughest cases and provide his clients with the attention they deserve in order to produce favorable outcomes both in and out of the courtroom. I highly endorse Larry Bowen.

Larry is a one of the finest attorneys i know, or have had the pleasure to face in court. He is a great advocate for his clients and a skilled opponent in divorce matters.

Larry is an excellent attorney with a great deal of experience. I've had several cases with Larry, and I've always been impressed by the way he's conducted himself and represented his client.

I endorse this lawyer. I always look forward to working with Larry because we can still make deals on a hand shake. He's smart, funny, professional and a zealous advocate for his clients.

I endorse this lawyer. Larry and I have been opposing counsel on several cases over the years. He is very intelligent and experienced but also unfailingly sensible and pleasant to work with while, at the same time, advocating strenuously for his clients.

I endorse this lawyer. I have known Larry for 30 years. I find him to be an excellent adversary.

Jennifer Babounakis, Divorce and separation Attorney on Mar 5, 2015
Relationship: Worked together on matter

I endorse this lawyer. He has specialized knowledge about military benefits and he works well with fellow lawyers and clients.