"Big firm representation and results with boutique firm feel and accessibility."
After serving as a county prosecutor and working at a Philadelphia law firm, in the fall of 2014, Michael opened DiCindio Law, LLC in the heart of downtown West Chester, Pennsylvania in Chester County. A boutique litigation firm that is focused on providing top level representation in criminal defense and personal injury matters. Michael's goal is to provide every client with exceptional representation and unrivaled attention and accessibility.  The firm's budiling is located just a few blocks from the Chester County Courthouse.

Michael D. DiCindio is a competitive litigator and student of the law. His dedication and work ethic has garnered praise and recognition by his colleagues and fellow trial attorneys.  After interning at the Chester County District Attorney’s Office, Michael was hired as a full-time Assistant District Attorney. He quickly became involved in all aspects of the criminal justice process. In his time at the office, he has successfully handled felony and misdemeanor jury and bench trials, preliminary hearings, appeals, grand jury proceedings and post conviction relief hearings.

Beyond his duties at the office, he was also an interscholastic trial team advisor at his alma mater, Widener University School of Law in Wilmington, Delaware, and has taught courses as an adjunct professor at the Widener Law Legal Education Institute. As a prosecutor, Michael was involved in the prosecution of cases including the following: homicide, criminal attempt homicide, homicide by vehicle while DUI, burglary, robbery, rape, drug-trafficking, aggravated and simple assaults, DUI, theft, and smaller drug-related offenses. He has also handled criminal appeals and PCRA hearings.

At the beginning of 2014, Michael left the District Attorney’s Office to join a blossoming law firm located in Center City, Philadelphia, handling plaintiff’s personal injury litigation and criminal defense. During this time, Michael represented injured individuals and people charged with crimes. He handled most of the firm’s criminal cases along with a large number of civil cases. In his time at the firm, Michael oversaw a range of cases – cases where the individual was facing charges on traffic tickets to rape in the Courts of Philadelphia, Bucks, Montgomery and Chester County.

Professionally, Michael has been honored with numerous distinctions/awards including Suburban Life's Top Attorney, Main Line Today's Top Lawyer, The National Trial Lawyer's Top 40 Under 40, and more.  He has also contributed legal commetary in the local, national and international print and radio media - including appearances on Sirius Satellite Radio programs and in print with NBC News.


**All testimonials or endorsements by clients or attorneys on this profile do not constitute a  guarantee, warranty, or prediction regarding the outcome of your legal matter.** 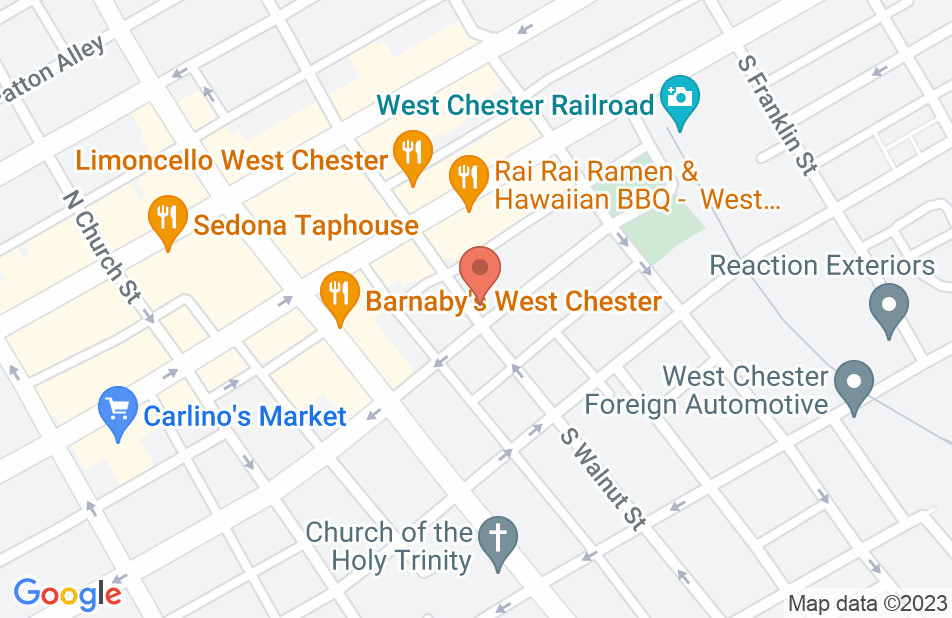 Mr. DiCindio was recommended to me through another, highly regarded attorney, who had been opposing counsel in a high-profile case. Mr. DiCindio's brilliant, legal mind as well as his unsurpassed integrity is a rare find in the world of law, especially criminal defense. He not only spent countless hours learning and researching every minut detail of my case, but he treated me with the utmost respect and always made sure I was fully informed in regards to any possible outcome. Mr. DiCindio never neglected to immediately respond to any communication from me and I knew he was genuinely concerned for my welfare. He didn't just know the generalities of my case, but remembered every, tiny, detail and would openly discuss the legal realities with me at length. I cannot recommend Mr. DiCindio highly enough and he is beyond reproach in regards to his ethics, legal knowledge his top-notch courtroom demeanor. Above all, as a client he will fight for you 500% and treat you with nothing less than kindness and dignity. I was very, very lucky to have him as my counsel as I know, without a doubt, my case would have had a very different and negative outcome.
This review is from a person who hired this attorney.
Hired attorney

I read reviews quite frequently to make sure I’m receiving top quality in a product or service. As you could imagine, looking up reviews for a lawyer (especially for a felony) can be scary and overwhelming. Finding someone who will make sure you receive exceptional representation is no easy task. Michael DiCinido is everything a person expects and needs a lawyer to be. Attentive, passionate, charismatic and above all else, caring. I retained Michael in May 2017 for my case. As a defendant in the legal system, everything feels like it’s moving in slow motion. Court dates take forever, dates to move the case forward can easily be pushed back and the gathering of information through formal practices seem almost impossible. Michael takes away as much of that anxiety as possible. He is concise in his updates, approaches every issue head on with clarity and his ability to get his client answers while navigating the, sometimes confusing, legal system is unparalleled. He is very stern and is straight to the point and that attitude is needed when dealing serious legal issues. His work ethic shows every day. He means every word he says and always follows through with immediate action. Overall, Michael is one of the most dedicated, hardworking responsible people I have ever have ever met. His confidence and skill made me feel comfortable in the most trying time of my life. This review does him no justice for all that he has done for me.
This review is from a person who hired this attorney.
Hired attorney

A Fantastic Lawyer and Person!

If you have found Mike in your search for a lawyer then you can already breathe a sigh of relief. Mike goes above and beyond In every step of the process. I can not express enough how fortunate I am that I was referred to Mike. His knowledge, his work ethic and his overall personality are just a few reasons that make him stand out. He is thorough, honest and professional. I highly recommend him!!!
This review is from a person who hired this attorney.
Hired attorney

Answered all questions and was always available to talk if I needed guidance. Made sure I had all the paperwork, payments, and service hours needed ahead of time and made the whole process go by smoothly. Made it clear what he was doing and what I had to do to make the process as painless as possible.
This review is from a person who hired this attorney.
Hired attorney

Mike DiCindio is a great attorney. He was very patient and incredibly understanding. I have a learning disability and he took the time to explain everything in terms that I could understand. Mike walked me through every step of the courtroom procedure which put me more at ease. He treats his clients like family and was always available when I needed him. I couldn’t have asked for a better outcome. I would highly recommend him.
This review is from a person who hired this attorney.
Hired attorney

I am 100% satisfied with my representation by Michael DiCindio. Prior to my making a commitment he spent time understanding my situation and told me of the process. He was patient, knowledgeable and courteous...a total professional. Upon my commitment he acted quickly, kept me informed and resolved the issue. I feel very fortunate to have had him represent me. I don' believe anyone could have done better.
This review is from a person who hired this attorney.
Hired attorney

With the people that filed the charges against me pushing for the Maximum Penalty (Just below a felony) Mike was able to show the DA that what they were really doing was coming after me personally because of business reasons and the DA saw right through them and agreed the charge should have be disorderly conduct. Mike lets the TRUTH be known when your wrongly accused. Don't get bullied. Push back with Mike.
This review is from a person who hired this attorney.
Hired attorney

I hired Michael this year and he helped turn my situation into brighter days! Extremely hard working, considerate, and understanding. I recommend %100, to anyone!
This review is from a person who hired this attorney.
Hired attorney

Mike Dicindio was recommended to us by our daughter’s arresting officer when I (half) jokingly asked if he knew of a good lawyer. The officer said Mr. Dicindio “is a good guy - an up and coming attorney who used to be with the DA’s office.” Mike treated our daughter with patience and respect while explaining her options and the legal procedures each step of the way. He took his time with us, and is super responsive. He has an excellent rapport/reputation with law enforcement, judges and district attorneys and is clearly respected by all. We have hired attorneys for civil matters in the past and Mike’s service/knowledge/professionalism blew everyone else away. You get a high-end attorney at an affordable rate for working class families. Finding him was a blessing.
This review is from a person who hired this attorney.
Hired attorney

Not only was Mike completely professional and timely, he was incredibly knowledgeable from our first conversation. He thoroughly went over the terms of my citation and different routes he would try to take to reduce the fine and dismiss the charge (which he did). He ensured he would fight for me like his own, and he absolutely followed through with that promise. As someone who has never been involved in disciplinary trouble, I felt safe walking through the courthouse after watching him stop to talk to most of the people we passed. If you’re looking for someone who is respected in the area, willing to educate you on your case, walk you through the process from beginning to end, and stand by you in court, then Mike DiCindio is undoubtedly the lawyer for you.
This review is from a person who hired this attorney.
Hired attorney
See all reviews

I endorse this lawyer. Very hard working, bright, energetic, works very well with others and talented in the courtroom

I have known Mike for several years. Mike is a tireless advocate and a smart, savvy trial-attorney. Mike has an incredible work ethic and always maintains the highest of ethical standards. I highly recommend Mike for personal injury and criminal defense matters.

Mike is extremely proficient. He has an eye for the minute details that make the difference between the defendant leaving the courtroom in chains and walking out a free man. I highly recommend him.

Michael is an experienced trial lawyer and has tried many cases to verdict. I highly recommend him if you need a civil or criminal attorney.

I endorse this lawyer. Mr. DiCindio is an honest, intelligent and highly competent attorney.

Mike is a respectable, professional opponent with excellent trial skills.

I endorse this lawyer. Mike is well prepared, well versed in the law and is always professional. I find him to be an excellent attorney.

I have known Mike for several years. Mike is a tireless advocate and a smart, savvy trial-attorney. Mike has an incredible work ethic and always maintains the highest of ethical standards. I highly recommend Mike for personal injury and criminal defense matters.

I endorse this lawyer. He is hard working and bright. He puts the people he represents first and has a strong knowledge of the law.

I endorse this lawyer. Very hard working, bright, energetic, works very well with others and talented in the courtroom