Joshua B. Goldberg is a partner with ARM Lawyers, where he has over 21 years experience handling personal injury and Pennsylvania Workers’ Compensation claims. He concentrates his practice in the areas of Workers’ Compensation and personal injury. Attorney Goldberg has handled all aspects of Workers’ Compensation matters; including throughout the appeals process as both a Claimant’s attorney and a defense attorney for various insurance carriers. He also has handled a variety of personal injury matters ranging from motor vehicle accidents to slip and falls to dog bites. His general litigation experience has taken him to numerous arbitrations and trials. He has also argued on several occasions before the Pennsylvania Commonwealth and Superior Courts. Mr. Goldberg received his B.A. degree from Allegheny College and his J.D. degree from Widener University School of Law.  He was named a 2011, 2012, and 2013 SuperLawyers Rising Star and a 2017, 2018 and 2019 SuperLawyer.  He was also a member of The National Trial Lawyers Top 40 Under 40 in 2012 and 2013.  In 2014, he was named as one of the 10 Best Personal Injury Attorneys for Client Satisfaction in Pennsylvania by the American Institute of Personal Injury Attorneys. In January of 2015, The National Academy of Personal Injury Attorneys named Attorney Goldberg as a Top Ten Pennsylvania Personal Injury Attorney for 2014. In 2015 Attorney Goldberg was honored as a member of National Association of Distinguished Counsel, which identifies the top 1% of all attorneys in each state in any given year. 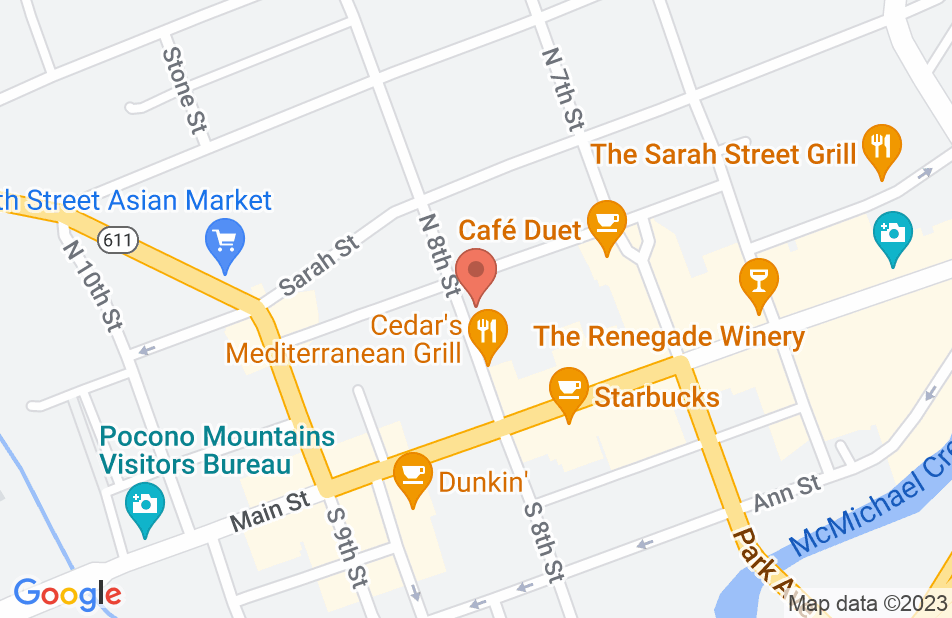 Joshua Goldberg represented me in my divorce and I hired him to represent me for my car accident. As he proved with my divorce, his negotiation skills are paramount! He got me the settlement I wanted and kept me informed during the entire process. I HIGHLY recommend Joshua Goldberg!
This review is from a person who hired this attorney.
Hired attorney

Joshua Goldberg is the epitome of what a lawyer should be. He is always prepared, never caught off guard and does his homework. He was able to negotiate a fair settlement in my case because he was ready for any contingency. When I was ready to give up and throw in the towel, he talked me down and convinced me to stay the course. I am forever grateful to Joshua and the entire family at ARM lawyers. I would refer anyone to them.
This review is from a person who hired this attorney.
Hired attorney

Excellent Guidance in a Stressful Time

I contacted Attorney Goldberg when I'd gotten into a car accident at work. Without hesitation, he came to my rescue advising me on how he'd handle my workers' compensation and accident claims. He's so well spoken and easy to understand, which is a very hard to find these days. Not only was he great, but his staff is excellent as well - everyone is so helpful anytime I call. This process is not fun at all, but having such excellent guidance through it all makes it alright.

Perhaps the thing that impressed me most about Joshua Goldberg was nothing was "sugar coated". He was very straight forward and told me what to expect each step of the way. Going thru the separation and divorce from start to finish, Joshua kept me informed of each step and what the options were and what the risks were. There were no empty promises made just to keep the client happy which I know sometimes occurs when seeking counsel. Since this was the first time going thru a divorce I had many questions. When calling the office, Joshua Goldberg took the phone call when he was available and if he was unavailable there was a return phone call usually within a few hours. Perhaps the best thing I can say is that I really felt Joshua Goldberg was on my side and knew what battles we should fight and what we should concede during the divorce. Divorce can be very emotional at times for the parties involved and Joshua really helped me keep things in perspective with his straight forward approach. Without a doubt, I would reccomend Joshua Goldberg for one's legal needs.

Over the years Mr. Goldberg has provided me with sound, clear, and practical legal advice on various issues.

This lawyer should not be called a lawyer. He is lazy. A liar and, terrible at his job. I hired him over two years ago for a w/c injury and nothing was done. I couldnt get my medication prescribed by doctors i was let go by employer for failure to submit paper work in relation to my w/c injury and status. Evey time i had a concern he always had an excuse as to why it was taking so long. It took almost a year to get a small check for some of the money owed to me for lost wages. The judge would issue the employer deadlines for things to get done the deadlines would come and go and nothing would happen. I would request for him to take action or notify judge on the situation and he would just give me an excuse stating that we would have to wait until our next hearing. Upon our hearing dates he would say we are going to settle then, do nothing he stated prior to our court date. He would not even try in the courtroom. I asked about getting the employer to compensate me for various doctors fees and travel expenses. He told me that those expenses were not covered and stated "that ship has sailed." which was also false. There was always an excuse. He then told me i could go and get my medication at the pharmacy. Upon going to the pharmacy I found out i had wrong w/c claim number. I the called his office and was given a second w/c claim number which was also wrong. Turns out after two years he didnt have my w/ç claim number. At this point I began to question his ability as an attorney. I asked him for a copy of all my records at which point he waited until our court date then told me if i wanted to change lawyers I had to do it then if not that I could not which was also false. Finally after much stress and research on my behalf and, another failed attempt in court I called his office and made a few request to try and help my case. I got no response. On our following court date he attempted to step down as my lawyer without warning and he started to complain to the judge and the defense attorney, He began to speak kess of me, stating i was being too demanding on him and his staff. Shortly after I retained a new attorney who got me my w/ç claim number my medication and w/c to start paying my lost wages inside of a few weeks. In closing I do not know why I he had such a difficult time with my case and why he stalled and misinformed me so much. After various counciltations with different lawyers I found a lot of the of his information was false. I would not recommend Joshua B Goldberg You would be better off representing yourself.
This review is from a person who hired this attorney.
Hired attorney
Joshua Goldberg's response: Unfortunately, the information contained in this review is not factually accurate. This particular client was unhappy with the positive results achieved in their case and, as a result, decided to leave a misleading and false review. Client satisfaction is our number one goal and will always be our number one priority.

Josh has taught me there are three important skills that every great attorney must have: legal knowledge, firm advocacy, and great communication with your client. Most attorneys are lucky to have two of these skills. Josh has all three. Josh Goldberg is a diligent, thorough, and compassionate attorney who always puts his clients first. I have had the pleasure of working beside Josh for two years, and have benefited both from his legal acumen and from witnessing his zealous advocacy for his clients. He is also one of the most ethical attorneys I've ever encountered. If you are looking for an attorney who will listen to you, creates realistic expectations, and has excellent legal skills , look no further. I could not recommend Joshua Goldberg any higher. I endorse this lawyer.

Josh has been a go to advocate for injury matters both large and small. In especially the larger catastrophic cases, Josh has a knack for pushing the issue to get the maximum value out of significant cases for his clients. It's great to know that North East PA has an attorney like Josh Goldberg who will not sell his clients short.

I wholeheartedly endorse this lawyer. Attorney Goldberg is smart, diligent, responsive to his clients, and highly experienced. You will not find a better personal injury attorney.

I endorse Joshua. Highly respected in the legal community and a strong reputation for client advocacy and dedication.

I endorse this lawyer. Mr. Goldberg is a skilled and respected member of the legal community. He is a zealous advocate for the rights and interests of his clients.

I endorse this lawyer. Attorney Goldberg is a highly qualified and knowledgeable Workers' Compensation attorney and I highly recomend him.

If you're injured in the course of your employment you need someone who is going to look out for you, and not let an insurance company push you to the side. Attorney Goldberg has a flair for creating a personal image of his clients to opposing parties, instead of just a claim number. If you want your worker's comp case to be just another file on a dusty stack, call someone else. If you're looking for personal attention from a skilled practitioner, call Joshua Goldberg!

Joshua Goldberg is an EXCELLENT attorney who comes highly recommended from me as well as others that know him. You will not be making a mistake in choosing Joshua as your attorney.

I endorse this lawyer. Attorney Goldberg is a fantastic Workers Compensation lawyer and can help you get the results you deserve.

I endorse this lawyer. Attorney Goldberg has done a superb job helping our clients at MHK Attorneys with their workers compensation matters. He provides free and useful information to potential clients and is always quick to respond to their questions. GIve him a call to discuss your case and you will be amazed at his knowledge on workers compensation. Ask to get the free guide to workers compensation. I highly recommend Joshua.

I endorse this lawyer. Attorney Goldberg has recently achieved Super Lawyers' - Rising Star Award. More important is that Attorney Goldberg in every bit lives up to that tittle. Through his 12 years of law practicing he has won case after case, while always aiming for the best possible outcome for his clients. I recommend Attorney Goldberg to any who are looking for a hard working, reliable, and honest lawyer.

I can't say enough great things about Attorney Goldberg. He is honest and hardworking and and cares about his clients. If your looking for a personal injury, family law or workers compensation attorney you don't have to look any further than Joshua Goldberg