After earning a Bachelor’s Degree in Political Science from Rutgers University, Mr. Malamut was admitted to and attended Temple University School of Law where his numerous accomplishments included the Moot Court Honor Society and the prestigious Barrister’s Award for Outstanding Trial Advocacy.

Civil matters Mr. Malamut handled include, but are not limited to (representative cases):

In addition to his work as an Attorney, Mr. Malamut serves as President of the Board of Trustees of the Boys & Girls Club of Camden County – an organization that provides services to more than 4,000 at-risk youth in the Delaware Valley. 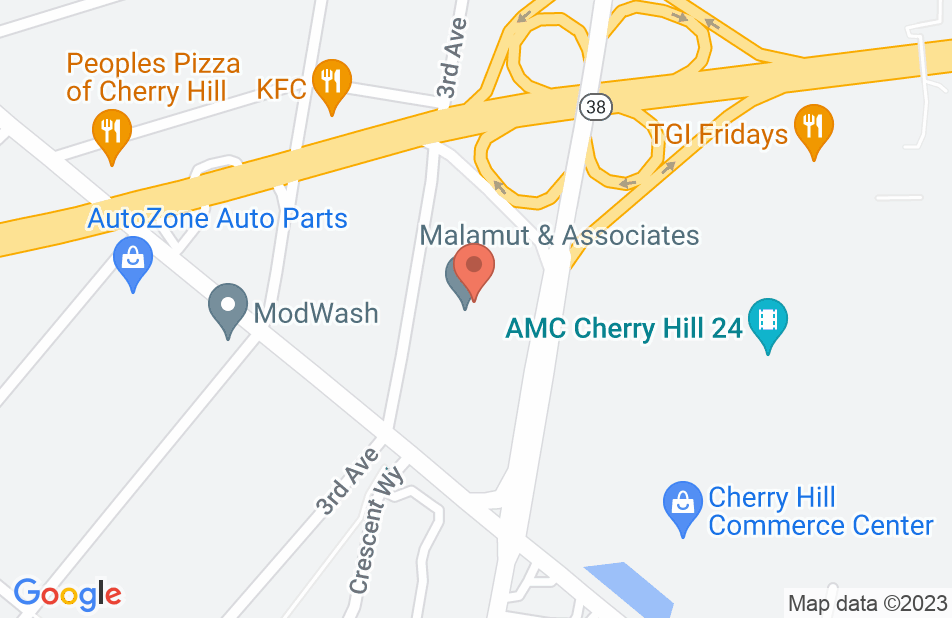 Living our lives as law abiding citizens, we found ourselves in a legal nightmare. Adam's law firm is incredible. Some of the laws of the state of NJ are just wrong. Adam's law firm and hard work gave my husband of 31 years a great defense and freedom. I highly recommend his firm as he will fight for your rights. He met with us immediately and gave us the assurance we needed. Him and his associates are just incredible an I would highly recommend him

Several years ago I was involved in a serious automobile accident, my previous attorney on the case mishandled it and had allowed for it to be dismissed without my knowledge. Adam took my personal injury case the minute I came to him, and immediately worked for my case to be reinstated and settled. From the time he started working on my case, until the end, I had a peace of mind knowing my case was in the right hands. He is an outstanding lawyer and goes above a beyond for every client he works with. Adam kept me well informed with every step he made, and every step I had to make. He is a true professional and an absolute pleasure to work with, you will not find a more caring, compassionate, kind attorney. I highly recommend Adam!

Malamut & Associates was very easy to work with. They responded to my requests in a timely fashion and always treated me with respect. They came highly recommended to me and I would encourage anyone who is looking for a fair, reliable lawyer to contact this firm.
This review is from a person who hired this attorney.
Hired attorney

Anne Marie Jensen handled my case, she was truly professional, compassionate and also understanding. She always got back to me right away and truly led me towards the right direction. She never made me feel that my case was too big or too small. She did everything possible for the best outcome on my case. She is the best attorney that I have dealt with. I highly recommend her and would give her 10 stars if possible. Malamut paralegals are also EXCELLENT, they always get back to you right away. Without a doubt this the best LawFirm.
This review is from a person who hired this attorney.
Hired attorney

Annmarie Jensen handled my non-contested divorce, and she was a pleasure to work with. She made the process as easy as possible, and was always professional and on point. She truly made me feel that she was working for me, not the other way around! Hopefully you'll never need her services, but if you do, you'll be in great hands!
This review is from a person who hired this attorney.
Hired attorney

The law firm was very knowledgeable. My calls and emails were returned in a timely manner.
This review is from a person who hired this attorney.
Hired attorney

After my severe fall Annemarie and Nicole were there to make me feel safe and secure with their legal representation. Any problems l had during this time, they helped me solve and get through it.
This review is from a person who hired this attorney.
Hired attorney

Malamut and associates has treated me with such a warm kindness, that has eased my suffering and worrying when it came to my case. They have done an exceptional service! Please call them for any of your workers compensation needs.
This review is from a person who hired this attorney.
Hired attorney

Great law firm specializing in workers compensation! The staff is very professional. Prompt responses to my calls and emails. I received all necessary treatments and care for my injury. Special thanks to Kathy and Angela(paralegal team)
This review is from a person who hired this attorney.
Hired attorney

Excellent lawyers who go above and beyond. They make sure you’re paid close attention to and keep in contact with you throughout the entire case!!
This review is from a potential client who consulted with this attorney.
Consulted attorney
See all reviews

Adam is a zealous advocate, understands New Jersey's complex legal landscape, and is always willing to take that extra step to ensure a positive result for his clients. I endorse this lawyer.

Adam is an outstanding attorney. His commitment, compassion and courage to protecting his clients' interests are second to none. Adam is the consummate fighter for his clients . He will go the distance no matter who the opponent. I highly endorse Adam.

Adam is a zealous advocate for his clients and is well-respected and admired amongst his colleagues. I strongly endorse him.

Adam is a solid citizen and reliable professional. I can endorse him and his firm with confidence.

While Mr. Malamut and I have been adversaries for over a decade, I endorse him without reservation. He is a zealous advocate for his clients. When I was a prosecutor, Mr. Malamut was not only thoroughly prepared and knowledgeable, but also conveyed his clients' individual facts and circumstances. Very few attorneys took the time and effort to know their clients on such a personal level. He routinely obtains outstanding results for his clients due to his professionalism, hard work, aggressive advocacy and compassion. No matter what your legal needs are, Mr. Malamut will prove an invaluable asset in your corner.

Not only is Adam a great lawyer, but he is a great person. It is my pleasure to endorse this lawyer.

I endorse Adam Malamut due to his extensive experience and his commitment to representation of his clients.

Adam is a strong advocate for his clients. His diligence and attention to detail make him an excellent choice for anyone in need of legal services. I would not hesitate to contact him with any type of issue - criminal defense or civil litigation.

Nickolas Mourtos, Divorce and separation Attorney on Mar 31, 2015
Relationship: Worked together on matter

Adam Malamut is an attorney who not only achieves results but is legitimately concerned with his clients' well-being. It was a pleasure working with him on several cases that overlapped into our respective areas of law and I look forward to working with him again in the future.

I worked together with Mr. Malamut on a criminal matter in which we represented different defendants. I have also had the opportunity to observe him in Court. He is at all times well-prepared and is a zealous advocate for his clients. I endorse Mr. Malamut.

Adam Malamut is a pure professional. He carries himself like a gentleman in court and with his clients. I was pleased to hear that Adam was recently chosen as SJ Magazine's "Top Attorney" for White Collar Crime. When you need a lawyer who is well respected by his peers, and ready get into the trenches and fight, Adam is the attorney for you.

I have worked with Adam Malamut in a number of cases in which we represented different persons. He is tenacious, thoroughly prepared, and unwavering in his commitment to providing zealous representation to achieve the goals of his client. In addition, his personality allows him to interact well with opposing counsel -- and to challenge opposing counsel when needed -- to accomplish his clients' objectives.

I worked with Adam on a legal project together and found him to be thoughtful, intelligent, attentive and focused. I would recommend his services to any client without question.