After receiving my B.A. from Rutgers University, I chose to pursue my dream of becoming an attorney.  While I was finishing up law school at Rutgers, I began an internship with a prominent criminal defense firm.  Upon completion of  law school and passing the bar exam, I immediately began representing clients and defending the constitution in our courts.  After working as an associate until 2003, I opened my own law practice in 2003.  In 2015, in an effort to better serve my client's differing legal needs, I chose to diversify my practice.  I joined the law firm of Liebling Malamut, LLC as the head of the criminal practice group.  I now specialize in all aspects of criminal defense including the most serious felony charges to the most minor municipal court charges. I personally handle each case; I do not transfer your important matter to a junior associate as many of the larger firms will often do.  I am an expert on search and seizure law and will provide you with a vigorous defense in both State and Federal Court.

I have succesfully argued two matters before the NJ Supreme Court.

In the search and seizure area, I am particularly proud of one of my major accomplishments on behalf of a client.  In 2013, I argued the matter of State v. Brown, 216 N.J. 508 (2014). In that case, the State attempted to justify the illegal search of a home based on an argument that the house was abondoned.  I was able to convince the NJ Supreme Court that the house was not an abandoned home and thus the search was in violation of my client's constitutional rights.

I likewise successfully argued another matter in the NJ Supreme Court whereby the State was attempting to disbar my attorney client. I was able to keep the attorney from being disbarred.  The matter resulted in a suspension only, thereby preserving my client's ability to earn a living for he and his family.

I appeared on the Nancy Grace show as an expert commentator with regard the the murder case of State v. Fred Neulander.  Mr. Neulander was a Rabbi who was at the time on trial for hiring a hitman to murder his wife. He was ultimately convicted and is serivng a life sentence. 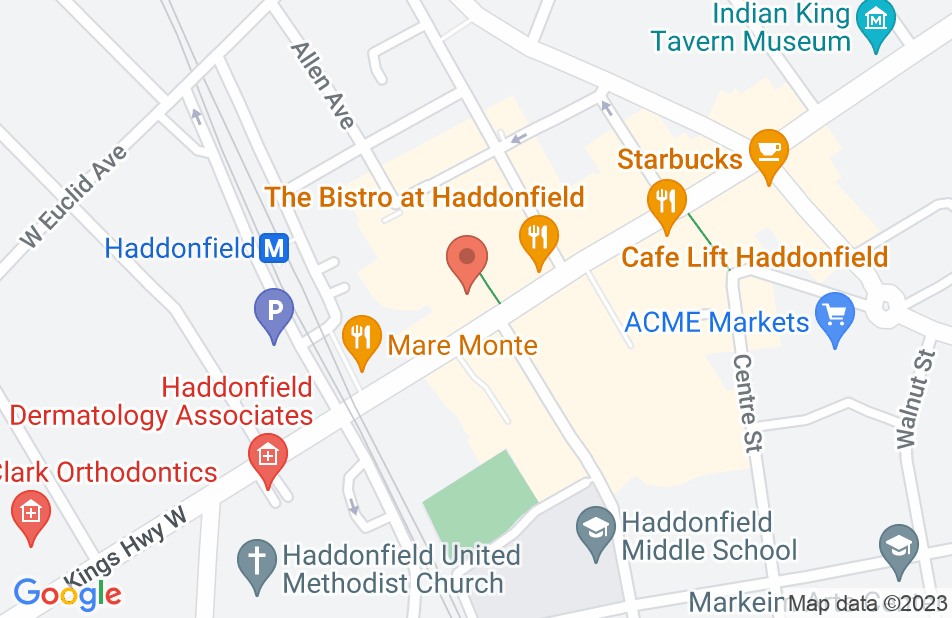 Ken is a pleasure to watch in the courtroom. His knowledge and professionalism gives his clients the comforting sense of reassurance at a time when it is needed the most. Court proceedings can be scary, when you walk into a court room with a confident attorney who you know has your back.... well there's something to be said about that. Thanks again Ken!! You did a great job!
This review is from a person who hired this attorney.
Hired attorney

Ken is a GREAT lawyer, he made a very difficult time period in our lives more bearable. His professional, honest and courteous approach is second to none. Thank you!
This review is from a person who hired this attorney.
Hired attorney

Mr. Aita has addressed many legal matters for me and other family members. Each time with the utmost professionalism and expertise. Calls are returned promptly and follow up is impeccable. Every scenario is thoroughly explained with no detail left undiscussed. I highly recommend Mr. Aita for your suitable legal needs.
This review is from a person who hired this attorney.
Hired attorney

Ken was super helpful, informative, professional and understanding. He took the time to answer all my questions and listen to concerns. Would definitely recommend him!! Thank you very much!
This review is from a person who hired this attorney.
Hired attorney

Little or no damage

Ken has represented me in several crimanal cases, and all have been resolved with little or no damage... A great lawyer that ALWAYS answers, or calls back quickly. I will be using him for any issues in the future, and highly recommend his services. Stand up guy all around!!!!!
This review is from a person who hired this attorney.
Hired attorney

Ken aita has represented my wife and myself for several matters. He has worked diligently to represent my case to obtain a firearms license, as well as explain to the court my wife's "driving skills". He has become more than just a lawyer to us. He is our "go-to" for any and all legal questions, and will always be our lawyer.
This review is from a person who hired this attorney.
Hired attorney

Ken Aita is without a doubt the best attorney in south jersey! It is hard to sum up in 4000 characters the level of professionalism and caring that is inside of him. I have had a few "misunderstanding" with the justice system and one of them was MAJOR. I had a situation where there were 7 counts brought against me and needless to say I was a bit nervous since I have a family that depends on me to support them. Ken sat down with me and laid out every situation and said that if we got lucky and hit a homerun we would be looking at probation plus but that it would be on my record which wold inhibit me from working in my current field and I would have to find a new career at the age of 40 and its all that I had done for the past 20 years. I work in the financial industry and since the crash of 07-08' things were not the same. I was hit by all angles, County, State and Federal law enforcement agencies. There was a real fear of not only having it be on my record but going to prision. Not only did Ken start off the battle with getting the degree of infraction (all of them ) dropped down so I could have the option for bail, he then developed a strategy that was like no other. Ken never stopped, it seemed like every two weeks we were walking into a court room and he was knocking down the prosecution one by one. He was relentless. The situation was long and draining and Ken was always there and positive and said don't worry I have it all under control. In the end, not only did Ken hit it out of the park, but he hit a GRANDSLAM. Ken was able to get all of the charges dismissed. No prision, probation or community service. The Bail money was returned and to top it all off he was able to get everythgin expunged off of my record. The man is a genious. I can tell you that outside of the time he won a case in front of the Supreme Court, this would have to be (in my opinion) his second greatest case. Ken Aita is very dedicated and extremely intelligent. He knows and loves the letter of the law and can make a case in any situation. I would and have told anyone I know that if they ever need an attorney Ken Aita is the one to call.
This review is from a person who hired this attorney.
Hired attorney

We could not possibly have had better representation than Mr. Aita

Our son was facing very serious felony charges that could have impacted him for the rest of his life. Although the crime was a non-violent offence it was being taken very seriously by the police and the district attorney. After months of investigation we were notified that there would be an arrest and felony charges. Ken was with us through the investigation and arranged for our son to turn himself in for booking to avoid a public arrest. He was on the phone with us constantly and took our calls at all hours of the day and night. More importantly he was constantly on the phone with the investigators and district attorney pointing out facts that were favorable to our side of the story. In the end Ken arranged for a plea deal that wound up with a probation that will end with the charges being dropped upon successful completion of the probation terms. We didn't even know that was possible. We will use Mr. Aita to expunge the arrest record when the time comes and now our son has his future back. We could not be more pleased. The process is so stressful and traumatic that you need an attorney like Mr. Aita to guide you through it.
This review is from a person who hired this attorney.
Hired attorney

I have heard great things about Kenneth Aita. I decided I was going to reach out for Kenneth and find out for myself, when I needed him. Kenneth was extremely helpful and was always very quick to respond when needed. I was also very impressed with his experience and knowledge within his profession. He definitely proved to me that he is extremely qualified for what he does. I would without hesitation recommend Kenneth Aita for any matter that you have.
This review is from a person who hired this attorney.
Hired attorney

Use him for the best results and quickest trials

Best lawyer I have ever used for criminal charges. Hes is punctual and always on time, besides the depth of his knowledge.
This review is from a person who hired this attorney.
Hired attorney

Ken is first class, leaves no stone unturned and will fight hard for his client. I endorse this lawyer.

Kenny is an extremely knowledgeable, aggressive advocate for his clients. His professionalism and candor when communicating with judges, attorneys and clients is excellent. I recommend him for any criminal defense manner where you require an intelligent, trustworthy and personable attorney.

I endorse this lawyer. Ken is a skillful attorney who pays attention to the details. I highly recommend him.

I have known Ken for numerous years. We recently was involved with a Federal case that had over 80 plaintiffs. All of the plaintiffs were wrongly accused or incarcerated. Ken did a fantastic job. I've seen him try difficult criminal cases and get great results. Very hard working and dedicated.

Any person who may be facing criminal charges must consult with Mr. Aita. Mr. Aita combines superior analytical skills, intellect and outstanding advocacy in his representation of those charged (or about to be charged) with serious offenses. Well respected by the prosecution, Mr. Aita holds his adversary to the heavy burden of proving their case "beyond a reasonable doubt". Because of his success, much of his client base comes from referrals by prior clients. It is not only well deserved, but it is also an honor to endorse Ken Aita.

Mr. Aita is a seasoned criminal defense attorney who is diligent and zealous. I endorse this lawyer.

Ken is an excellent advocate who focuses on problem solving. He has a great relationship with his clients, who come to trust his straight talking, no-nonsense approach. He is compassionate to our clients, but a hard-nosed, but professional, adversary to those who oppose them. It is with great pleasure that I endorse Ken.

I endorse this lawyer. I have known Mr. Aita as an adversary from my days as a prosecutor. He is a tireless advocate who consistently obtains outstanding results for his clients. He is tremendously knowledgeable of New Jersey Criminal Law and always goes the extra mile. I would recommend him to anyone who is in need of a good criminal attorney.