With over a decade of experience and recognition within the legal industry, Attorney Lazaro Blanco has established himself as a dependable Kissimmee criminal defense lawyer. He serves clients throughout Osceola County who were charged with crimes such as DUI, theft, and violent offenses. As Lead Attorney at Blanco Law Center, PA, he stands ready to fight for the rights and futures of all his clients. If you face serious criminal charges, now is the time to schedule a free consultation and learn more about how you can protect yourself from the devastating consequences of a conviction. Do not fight the charges alone. Let their team give you the counsel and guidance you need to secure a favorable outcome. Call today to get started. 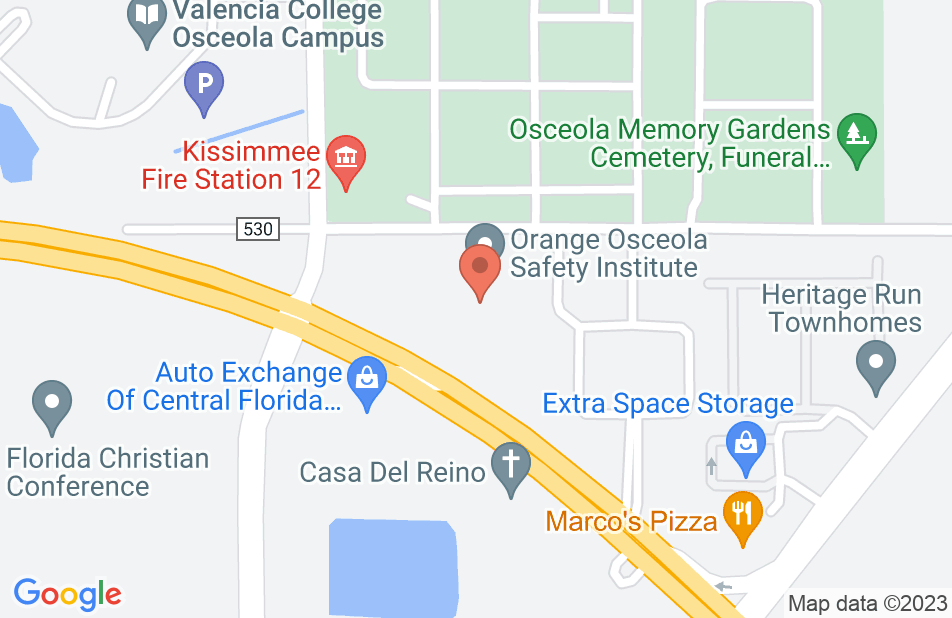 Lazaro’s work ethic is incomparable. He was honest from the beginning and was able to proof my innocence and free me of all charges accused against me. He paid attention to all details and made sure to always communicate and update me regarding my case. He successfully dropped all charges, all of them felonies, and I can not thank him enough for his dedication and hard work towards my case. I recommend this lawyer to anyone looking for a defense attorney. He has showed me to be the best lawyer I could have asked for.
This review is from a person who hired this attorney.
Hired attorney
Lazaro Blanco's response: Thank you so much!

A Model For Lawyers Everywhere, In Every Discipline of Law

Having been involved with the law on both sides, both in civil and criminal, as well as having a legal education background as a paralegal I have very high standards for who I hire to represent me. I recently was accused of a serious felony that was fabricated but due to my background and having a history of a similar offenses I was in a really tight spot. Mr. Blanco provided me with sound legal advice void of emotion and simply a clinical outlook based on his extensive experience and provided me with options at every step of the way. At no point did he attempt to influence my decision, and never sought the easy way out. I was offered a EXTREMELY favorable plea that most lawyers would have forced their client to take due to the severity of what I was facing. When Mr. Blanco presented me with the plea he did advise me to take the plea, however when I declined on moral principle that I did not want to admit to something I did not do out of fear of a harsher sentence, he did not give up or work less hard. Once I told him to prepare for trial, he buckled down and got to work. In the end, he was able to maneuver within days of trial and resulted in the state attorney dropping 3 major felonies against me, in a judicial circuit that doesn't typically see such outcomes. Mr. Blanco has a very dynamic approach to his legal maneuvering which displayed a level of legal knowledge and experience that is typically found with someone with decades of experience to his senior. I do NOT give recommendations lightly, especially when it could be used to make a decision that could have a huge impact on someones life. I do not anyone else could have secured the end result that Mr. Blanco was able to do. I am happy to give him my fullest recommendation to anyone seeking legal representation in a criminal or family law matter.
This review is from a person who hired this attorney.
Hired attorney
Lazaro Blanco's response: Thank you so much!

I hired attorney Lazaro Blanco to represent me for a felony matter. He did exactly what he said he was gonna do he got my charges reduced no jail time probation I walked away with just court fines. He was very professional always available to answer any questions or concerns I had regarding my case. He even met me places if I couldn’t make it to his office. I definitely recommend him as an attorney when it’s concerning your freedom you need somebody who’s gonna fight for you and he definitely will.
This review is from a person who hired this attorney.
Hired attorney
Lazaro Blanco's response: Thank you for your kind words Travis. It was a pleasure to have you as my client.

Lazaro Blanco is an excellent attorney who demonstrates his ability by open communication, follow-through and preparation for court. It was refreshing to know we were going in ready to fight back for the right to present Discovery. Lazaro is dedicated to his clients and was an answer to prayer. He takes his cases seriously and respects the fact a life is in the balance. In a system which does not always allow all the facts to reach the judge's hands, it was of great comfort to know Lazaro was able to get the information through. He was not shut down and cares. Thank you, Lazaro.
This review is from a person who hired this attorney.
Hired attorney
Lazaro Blanco's response: thank you for your kind words Brenda. God bless!

From the minute that we contacted Mr.Blanco he took absolutely great care of me. He was direct, honest, and most importantly always made sure he was available at all times and ready to answer any question or concern I had. He kept me updated through every step of the way with my case and most importantly, he successfully got my charges dropped and my name cleared. I would highly recommend him to anyone that is ever in need of THE BEST legal representation. If I could give him 1000 stars I would! Thank you Mr. Blanco for all your hard work, and thank you for giving me back my freedom.
This review is from a person who hired this attorney.
Hired attorney
Lazaro Blanco's response: Thank you so much Brady!! It was my pleasure to be at your service.

He went above and beyond my expectations...truly brought me piece of mind..very professional and also very friendly..a very incridible person and lawyer....he knocked out of the park thanks lazaro for everything
This review is from a person who hired this attorney.
Hired attorney
Lazaro Blanco's response: Thank you so much Manuel !!

Simply the best attorney, you will not find a better one Lazaro is a very professional lawyer . He is caring . Im so happy I found Lazaro to handle my situation . If I could give him a higher rating I would . Thank you Lazaro for all you done for me .He’s very professional. Nice person, he knows perfectly how handle every situation.. I Recommend Him
This review is from a person who hired this attorney.
Hired attorney
Lazaro Blanco's response: Thank you so much!

I was referred to Attorney Blanco by a family friend I hired attorney Blanco after interviewing several Attorneys in my area. Attorney Blanco came across very personable and easy to talk with. I was not familiar with the judical process, however, Attorney blanco was very thorough in explaining the process and what our options were I felt that his in depth level of experience led to us receiving favorable outcome His communication during the process was impecable and he was very accessable to myself and to even other concerned family memebers Attorney Blanco was a beacon of hope for myself and family during a very trying time in our lives
This review is from a person who hired this attorney.
Hired attorney
Lazaro Blanco's response: Thank you Winston!

Attorney Lazaro Blanco is the type of lawyer that most people ask them self if they exist, in my case he was on top of every angle keeping us in touch and inform on how the process was going an where it was heading giving us diferent option on what to do also suggesting us on what to do or wich way to go on our best interest in order to get the best results. Very responsable staying in contact and also answering or returning phone call. We where also able to see the type of respect that the court gave him through the process reflecting his knowledge when it comes to laws. Definitely the lawyer that you can relay on every step of your case without any worries on feeling alone or uninformed on what is going to happen.
This review is from a person who hired this attorney.
Hired attorney
Lazaro Blanco's response: Thank you Francisco!

A beacon of hope in dark times.

While going through a confusing and difficult divorce, there he was! He helped with everything I needed and always let me know exactly what my options were and what steps to take. I honestly don't know what I would have done without him. Not only is he an amazing professional, he's a good soul who treats you with respect and kindness (even when you're ugly crying and intelligible constantly). I hope I never need him again, but if I do, I know he will be there and get the job done.
This review is from a person who hired this attorney.
Hired attorney
See all reviews

I've known Lazaro since law school. He has become one of Florida's best lawyers and I certainly endorse him.

I endorse this lawyer. Lazaro is a tireless and talented criminal defense trial attorney. Rest assured that you are in good hands with him as your counsel.

I endorse this lawyer. He is easy to talk to and dedicated to his clients yet formidable.

Lazaro is an experienced, highly respected attorney who always represents his clients with the utmost of skill,knowledge and understanding.i can readily endorse him without hesitation or reservation.

Mr. Blanco is an extremely professional, consciousnesses, and effective attorney. I enthusiastically endorse him as a lawyer and an asset to the community.

I highly endorse this attorney. Mr. Blanco is well respected by his clients and fellow attorneys. He is extremely competent, intelligent and always well prepared.

I have had the honor to see Mr. Blanco flourish as both a prosecutor and a criminal defense attorney. His work ethic is second to none, and he is very confident in the courtroom. I recommend Mr. Blanco to anyone in need of legal help.

Laz is an outstanding attorney. I highly endorse him as a lawyer.

Lazaro is intelligent, hard working, and a dedicated attorney. I fully endorse this attorney

If you want a honest attorney who tells you how it is than this guy is the one for you!

I endorse this lawyer. He is a strong advocate for his clients and has the knowledge to advise his clients properly.

I endorse this lawyer. Attorney Blanco is a highly competent, professional lawyer. He is very intelligent & is always prepared in court. He cares for his clients & works very hard for them!

Mr. Blanco is aggressive, organized, and analytical. His ethical standards are unquestionable. I unequivocally endorse this attorney.

Mr. Blanco is a smart, hard working attorney who handles every case with care and attention to detail. Clients who retain Mr. Blanco are assured of the highest quality representation. I fully endorse Mr. Blanco.