Griggs continued to work for the Solicitor’s Office after graduation as a Warrant Officer. In 2001, Attorney Griggs received a full scholarship to attend the University of Cincinnati College Of Law, the fourth oldest law school in the country.

In August 2004, Attorney Griggs passed the Georgia State Bar Examination in his first seating. Griggs began his legal career in the winter of 2004 with a Cobb County Family lawyer, where he served as an associate mainly practicing family law in Cobb and Cherokee counties.

In January of 2005, Griggs joined the Rockdale County Public Defender’s Office as an Assistant Public Defender where he distinguished himself as an aggressive and passionate advocate of indigent defense. Griggs’s practice primarily focused on domestic violence, traffic, and DUI cases. Griggs received extensive training in trial advocacy and the fundamentals of criminal defense with the Georgia Public Defenders Standards Council during his time in Rockdale.

In September of 2005, Griggs was offered a position with the DeKalb County Public Defender’s Office after distinguishing himself as a passionate advocate during the Trial Skills Seminar at the University of Georgia. While in DeKalb, Griggs co-authored the DeKalb County Public Defender’s State Court Trial Practice Manual. Further, Griggs handled annually over 700 cases, successfully trying multiple criminal jury and bench trials ranging from MURDER to DUI.

In January of 2007, Griggs left the Public Defender’s Office and opened his own boutique criminal defense firm in Decatur with the help of prominent criminal defense attorney Keith E. Adams. Since opening the firm, Griggs has continued to set himself apart as passionate and skilled defense attorney in Metro Atlanta. This past June, Attorney Griggs opened his new Downtown Atlanta office. The new office maintains its dedication to present top quality legal defense in Metro Atlanta.

Gerald A. Griggs is an attorney who is a servant of the people fighting for what’s right. Attorney Griggs is firmly dedicated to the fundamental principle that “We seek truth, mercy, and justice forever.” Attorney Griggs seeks to serve the needs of the community one client at a time. 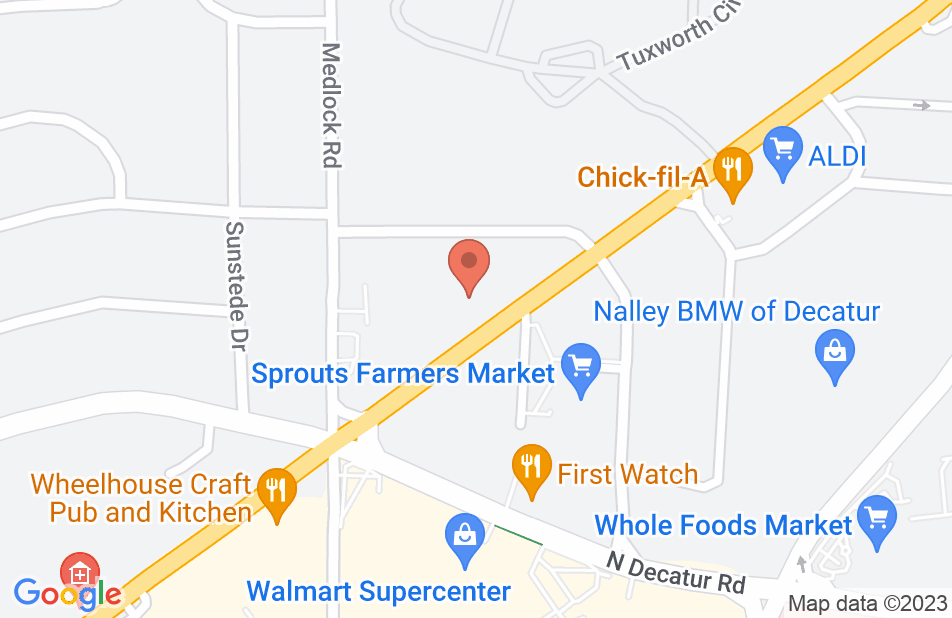 Mr. Griggs takes serious cases and treats them with care and respect. He is one of the best attorneys in Atlanta, Georgia. I am writing this review because without Attorney Griggs, I would not be free today.
This review is from a person who hired this attorney.
Hired attorney

One Of The Best Attorney's In America

Attorney Griggs is All about Justice and He Fights for Whats Right.... Great Attorney at Helping others that need his knowledge and expertise...He did a great job at helping a guy who called himself impersonating the police What fool pulls a stunt like that? But Attorney Griggs helped him on out.... Don't fall for the Bullshit lies some people try to tell... The devil is a liar from the pits of hell... Great Man and Great Attorney.... He is A Real Justice Fighter
This review is from a potential client who consulted with this attorney.
Consulted attorney

Attorney Griggs was an excellent source of information for me and my grandson who experience bullying and sustained a really ugly bruise on his upper arm while at school at liberty point elementary school in union city ga. An appointment was made for my grandson and I to go and talk with Attorney Griggs and to show the ugly bruise he sustained. My 5 year old grandson felt comfortable and confident to tell Attorney Griggs what happened to him while at school. Attorney guided us in the right direction. He gave us case law and court experiences that helped me to know the steps to take to address this matter which the principal at liberty point elementary seemingly wanted to shove under the rug. But after following the direction of Attorney Griggs there was NO way for the school to ignore the problem of bullying with my grandson. They had to acknowledge the harm done to my grandson and they had to answer to the office of department of Education for the state of Georgia about this young man. So I want to say THANK YOU Attorney Griggs for the wonderful assistance you provided me and my grandson. Thank you for staying with us on this matter until resolution was reached. I appreciate you and the wisdom of your staff for your help at a very stressful time for me concerning the harm that came to my grandson while he was at his school. God Bless and continually guide your practice to excellence in your field. In Jesus name, amen!

Mr. Griggs is simply the best advocate I have have seen and used. He really cares for his clients and the outcome of their cases. I consider him the best attorney I know and I have used him numerous times for many different kinds of cases. If you need the best attorney in Atlanta, call Mr. Griggs...

I went into Mr. Griggs's office for a consultation on a legal matter. I found him online and called him without prior knowledge of his ability as a attorney. After the consultation, I found him to be a great lawyer with detailed knowledge of the law. Even though, I did not hire Mr. Griggs because I did not actually have a case, I will keep him as the family lawyer because I was so impressed with his ability as an attorney. If you are searching online as I was for a good attorney, give Attorney Griggs a call and you will be as impressed as I was.

Got Me Out of a Bad Situation

Attorney Griggs got me out of a very serious situation with a very favorable outcome. Coming back from a football game in Albany, while heading back to Atlanta, I was pulled over for going 30 miles per hour over the 65 mile per hour speed limit in a (very questionable) construction zone. The officer stopped me, got me out of the car, and had my perform field sobriety tests, which she said I did poorly on. My girlfriend has driven the first 2 hours of the trip back, and I was simply finishing up from just northwest of Macon, since I hadn't had a drink in 5 hours. It was late, we were tired, and neither of us saw the signs for construction on the bridge above the roadway. I had never been in trouble before, but was facing up to 2 years in jail. Attorney Griggs' magic made it so that I never lost my license throughout the entire ordeal, even with refusing a breathalyzer, reduced the speeding to a typical non point speeding offense, and a reckless driving charge with 1 year of probation. I absolutely recommend Attorney' Griggs above all others!!! He is simply the best lawyer I have ever seen and I think if you have a difficult situation, you should call him immediately.

Attorney Griggs is simply the best attorney I have ever used. I hired him a few years back on a DUI and he got it reduced to a Reckless Driving. Since then, I have kept him as my family lawyer. He has handled a divorce matter, some minor contract reviews and even a bullying matter at my son's school. He is great and responsive to all my legal needs. I would say to any person that is looking for an attorney. Give Attorney Griggs a call and you will not be disappointed.

Mr. Griggs is an excellent attorney. He helped my family with a difficult situation. My son was charged with murder and he was able to get the charges dismissed and my son freed in DeKalb county. Without his help, I don't know how my family would have survived. I would and have recommended Attorney Griggs to all of my friends who needed attorneys.

Mr. Griggs is a excellent attorney. He is compassionate, driven, competent, and understands the needs of his clients. His record speaks for itself. He wanted my family members and myself in several different types of case. I would refer him to anyone I know that needs a great attorney.

Attorney Griggs is simply the best attorney in town, period. He helped me deal with a serious accusation in Superior Court. He fought for me and believed in me. He helped me clear my name and get my life back. I have watched Attorney Griggs 's career and things he has done in the community. He truly cares about the city and the State. I know Attorney Griggs and he is simply a great attorney. If you need help, call him...
See all reviews

Gerald is one of those attorneys that steals the show in a courtroom. When he speaks, people listen! He is an amazing trial attorney, advocate, and community spokesman. He is attention detailed and has the respect of the judges he appears before, I endorse him 110%

Eric Pitsch, DUI and DWI Attorney on Nov 12, 2013
Relationship: Other

Gerald is a great trial attorney. If you are looking for a lawyer who will not be afraid to take your case to trial, hire Gerald. You will be glad you did.

Mr. Griggs is an outstanding attorney who provides exemplary advice on Avvo. I would recommend everyone and anyone to him for representation. Even though I have been practicing fo 24 years, as a judge, magistrate, prosecutors, and in private practice, I learn valuable new information from him every day. A superb attorney.

I highly recommend Gerald, not only because of his skills as a litigator, but also because of the great passion he brings to each case. I've worked with him on several matters and know him to be a good man and excellent lawyer.

I endorse this lawyer. Gerald Ashland Griggs is a highly skilled attorney that is well respected in the legal community.

Gerald is a passionate and committed advocate for his clients. He is very knowledgeable in the area of criminal defense and has the experience to back it up.

Gerald is an outstanding lawyer. He can always be counted on to do everything in his power to ensure his clients achieve justice. I recommend him with the utmost confidence.

Gerald has been a leader in the Atlanta Legal Community since before we met a few years ago in Court. His representation has led to spectacular results and he has carved out a very respectable niche as a true expert regarding the juncture of Criminal and Education law. He has earned a very loyal client base due to his excellent customer service and courtroom results. I certainly recommend and endorse Gerald as an advocate and counselor, as well as a friend and trusted colleague.

I have known Gerald since I was a prosecutor and now as a fellow defense attorney and have had the pleasure of working on cases with him. He is an exceptional and talented attorney. I strongly endorse him.

I endorse Gerald Griggs. He is a hard worker with a reputation for taking on tough cases, taking cases to jury trial and delivering results for his clients.