David Benowitz has 22 years of experience handling criminal defense, white collar, and DUI matters in federal and local courts in Washington, DC and around the country. He began his career as a Staff Attorney at the Public Defender Service for the District of Columbia (PDS), recognized as one of the top indigent defense organizations in the nation, from 1995-2001. While at PDS he represented clients in serious criminal cases, including first-degree murder, first-degree sexual abuse, armed robbery, and carjacking.David then founded Price Benowitz LLP with the goal of assembling a team of aggressive, committed defense attorneys who do everything in their power to help their clients achieve the best possible result in their matter.

At Price Benowitz, David has represented clients and companies in a variety of high-profile white collar and criminal matters, including the “Africa Sting” FCPA prosecution dismissed by the Department of Justice, the former President of an African nation charged with bulk cash smuggling that resulted in a small fine, and a high-ranking naval officer in a wide-ranging government corruption probe. He represents CEOs, federal government contractors, financial services executives, and employees in a variety of investigations and criminal prosecutions.

David is a faculty member at Harvard Law School’s renowned Trial Advocacy Workshop and the National Institute of Trial Advocacy’s Building Trial Skills Program. He is the only Washington, DC criminal defense attorney to be certified as a Criminal Trial Advocate by the National Board of Trial Advocacy and he is an Executive Committee member of The National Trial Lawyers – Top 100 Trial Lawyers. David has achieved Martindale-Hubbell’s highest AV Preeminent rating, is rated a perfect 10/10 by AVVO, and has been recognized as a “Super Lawyer” since 2013. He was Co-Chair of the Steering Committee for the Criminal Law and Individual Rights Section of the DC Bar from 2013-2014. 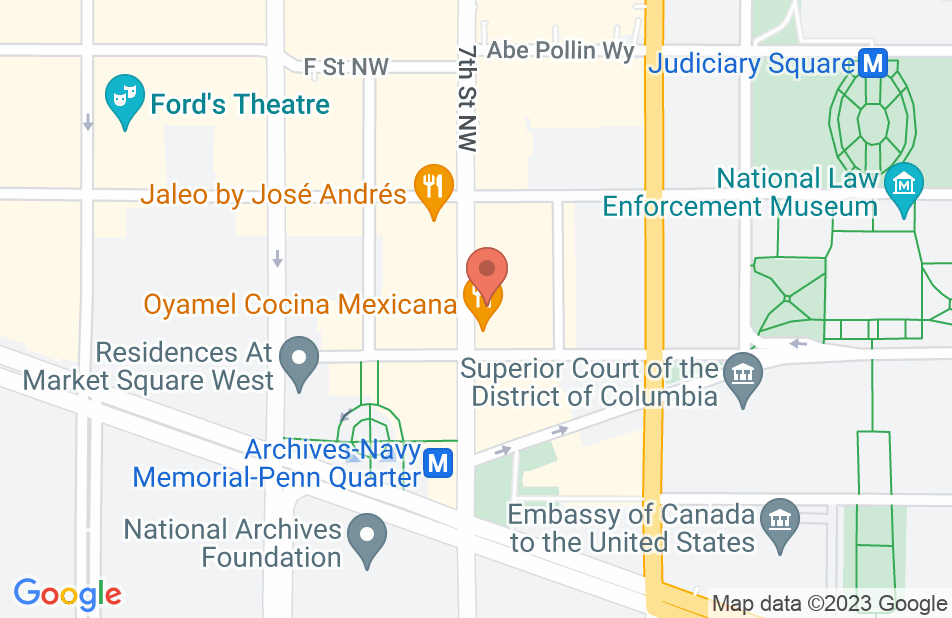 A true expert in criminal reform

David Benowitz is an experienced attorney who takes initiative in the relentless pursuit of justice. I was falsely accused of a crime I didn't commit and over the course of a 13-year span, Mr. Benowitz and I partnered to earn my freedom back. I may never get the 26 years I spent wrongly incarcerated back, but from this moment forward, my mission is to do as much as I can to make sure what I experienced doesn't happen to the next person. I can say this with certainty from my experience in working with Mr. Benowitz: justice is his passion and his pleasure.
This review is from a person who hired this attorney.
Hired attorney

My review is long, but well worth the info you will receive. David is a justice fighter. I can assure you that if you are considering hiring an attorney...look no further! David Benowitz will fight for you 100%. David saved my son's life!  I had to get an attorney quickly for my son who had a false allegation placed on him. My son NEVER had a criminal history. Everything happened suddenly, so time was not on my side as I was out of state. I jumped on a plane within a few hours to travel several hours to find an outstanding attorney in the DC metro area. My son was immediately assigned to a Public Defender. My experience with this particular Public Defender( actually a public pretender) was horrible. It is a zoo in the DC courts. You do not want your loved one handled by a person who would present a poor case and have your loved one locked up for years. Believe me when I say this. I sat in the courtroom and observed the judge just assigning people to anyone that was a Public Defender. These Public Defender's did not even know their immediate assigned clients names or their cases. It was like tossing your beloved dogs to Coyote's to be attacked. Would you want that for your loved one? I researched and found the best Dc metro area lawyer and that is David Benowitz. I can smile today because David Benowitz saved my son. David Benowitz is knowledgeable, intelligent and a fighter for your rights. You cannot find a better Dc metro area Lawyer. David is part of our family now. I will always be grateful. In my experience, David is a Gold Star and Top Rated Super Lawyer. I did the research. All you need to do is pick up the phone and call him. I guarantee you will thank me. My son is doing very well these days and I owe it to David Benowitz.
This review is from a person who hired this attorney.
Hired attorney

David is a consummate, straight forward individual, and I have no reservations in recommending him highly as a solid Attorney!
This review is from a potential client who consulted with this attorney.
Consulted attorney

Best attorney in DC and aggressive in the court room

David Benowitz went above and beyond to help out my family. We spoke to many attorneys, but none of which knew about cases and scenarios. David made us feel tranquil and we felt as if he had our best interest at hand. All charges were dropped and my family can't thank him enough. If you ever need a criminal attorney you definitely need to hire David Benowitz he is not only the partner but the best attorney in criminal law!
This review is from a person who hired this attorney.
Hired attorney

I don't want to be specific in our case, but I will say...David Benowitz was referred by a friend. He was helpful and played a large part in the outcome we received. I would call David B. if I ever needed a criminal attorney again. He was able to turn a 20 year bid into 30 months without corporation.
This review is from a person who hired this attorney.
Hired attorney

Mr. Benowitz is an extremely knowledgeable, and experienced lawyer. His approach with me was realistic combined with optimism. From the 1st day I sat with Mr. Benowitz I was given the entire bigger picture, before narrowing in on the specifics of my case. I appreciate Price Benowitz LLP office for being extremely professional. Personally, I do not feel that I could have been in better hands. I can't thank Mr. Benowitz enough. Highly recommended!
This review is from a person who hired this attorney.
Hired attorney

***AMAZING WOULD BE AN UNDERSTATEMENT***

I was up against a serious (Felony) firearms possession and a couple of misdemeanor charges in which if convicted, would’ve been detrimental to my family and military career, along with hindering any other possibilities of any career intentions I had post military. Prior to David, I consulted with many attorneys in the surrounding area, and on paper as well as in person he stood out amongst them all. His courtroom situational awareness along with exceptional demeanor, and etiquette were unparalleled. I do admit I was scared beyond anything you could ever fathom, due to the seriousness of the charges against me, but David remained CALM, CONFIDENT, and available for me 24/7, through the whole ordeal, which demonstrated his dedication to being a TRUE PROFESSIONAL! ***In the end, ALL charges against me were dismissed!***
This review is from a person who hired this attorney.
Hired attorney

David has represented me on several occasions and I was thrilled with the outcome. I would highly recommend Mr. Benowitz and his firm.
This review is from a person who hired this attorney.
Hired attorney

Saved me from the chair.

I consulted with Mr Benowitz after I was charged with possession of a controlled substance and feared the worst. He explained options and I hired him to represent me in court. After a quick hearing, he managed to get me diversion. So after 32 hours of community service the Judge dropped the charge and I still have a clean record.
This review is from a person who hired this attorney.
Hired attorney

I was pleasantly surprised at how instantly comfortable Mr. Benowitz made me feel upon our first meeting. He always kept me in the know and, most importantly, gave me a sense of security.
This review is from a person who hired this attorney.
Hired attorney
See all reviews

I can endorse and recommend David as a top criminal defense attorney in the DC area. From my own standpoint as an Immigration attorney I have referred individuals to David for assistance with their criminal matters.

Dave has tons of experience in both federal and state courts. Sound legal advice plus solid courtroom skills.

David Benowitz has a well-earned reputation as a fierce litigator in DC. Highly recommended.

It has been an amazing experience to work with Dave on serious criminal matters. I look forward to continued joint projects in the future.

I endorse this lawyer for the AVVO "personal Injury" practice area, because David is recognized in the Washington legal community and having experience, knowledge and skill that is superior at all levels. Plus he is a survivor and hard charger. The kind of guy we all need when it is time to go to battle in court. A true warrior.

I endorse this lawyer. Amazing attorney.

David is a smart, thoughtful and highly skilled advocate both in and out of the courtroom. He is a teacher to other lawyers, and is a frequent and popular speaker. David also received the AV rating from Martindale Hubbell meaning other lawyers and judges have found him to be among the most knowledgeable and ethical in his community. I highly recommend David as the top choice for your defense.

I endorse this lawyer's work. David is one of the hardest working DC area DUI lawyers. He is a zealous advocate for his clients.

I endorse this lawyer's work. You will be well served if you hire this gentleman. Excellent Lawyer.

I endorse this lawyer's work. David does an outsanding job and is a true fighter.

David is our firm's go-to-guy in DC. He fights hard for his clients.

I am happy to endorse David's work as an attorney.

I endorse this lawyer's work. Dave is a highly intelligent lawyer who workjs very hard for his clients, knows the system very well, and is highly skilled in the courtroom. Perhaps most importantly, he consistently earns and deserves the trust of his clients. I highly recommend him.

I endorse this lawyer's work. Very smart lawyer with a high-level of integrity. I highly recommend him.