Highly rated workers' comp lawyer serving injured workers. I would be honored to serve you too.

Mr. Wolf began his undergraduate studies in the University of Pittsburgh College of Engineering, where he was an Engineering Honors Scholar. He then transferred to the University of Pittsburgh College of Arts and Sciences, graduating in 1993 with a Bachelor of Arts in History and holding minors in Anthropology, the Classics, and the History and Philosophy of Science. Following his undergraduate work, Mr. Wolf studied at the University of Pittsburgh School of Law, earning his Juris Doctor in 1996. During the summers between years at law school, Mr. Wolf volunteered at the Berks County District Attorney's Office, becoming a Certified Legal Intern in 1995, and representing the Commonwealth of Pennsylvania at preliminary hearings.

Mr. Wolf joined the firm in 1996. He is licensed to practice before all Pennsylvania courts and the United States District Court for the Eastern District of Pennsylvania. He is a full member of the Montgomery County Bar Association and an Associate Member of the Berks County Bar Association. Mr. Wolf is also a member of the Pennsylvania Bar Association, where he is active on the Solo and Small Firm listserve. He has lectured numerous times at the PA Bar's Solo and Small Firm Practice Section Retreat. Mr. Wolf's community involvement has included serving as Chairperson of the Borough of Pottstown's Historic Architecture Review Board (HARB), acting as solicitor for the Carousel at Pottstown project, serving on the Advisory Board to Project Hearth, and serving on the Board of Governors of Congregation Mercy and Truth and the Board of the Pottstown Historical Society.

Mr. Wolf and his wife live in the downtown Historic District of Pottstown. He concentrates his practice in Workers' Compensation, although he also has experience in Family Law, Criminal Defense, General Civil Litigation, and appellate work. 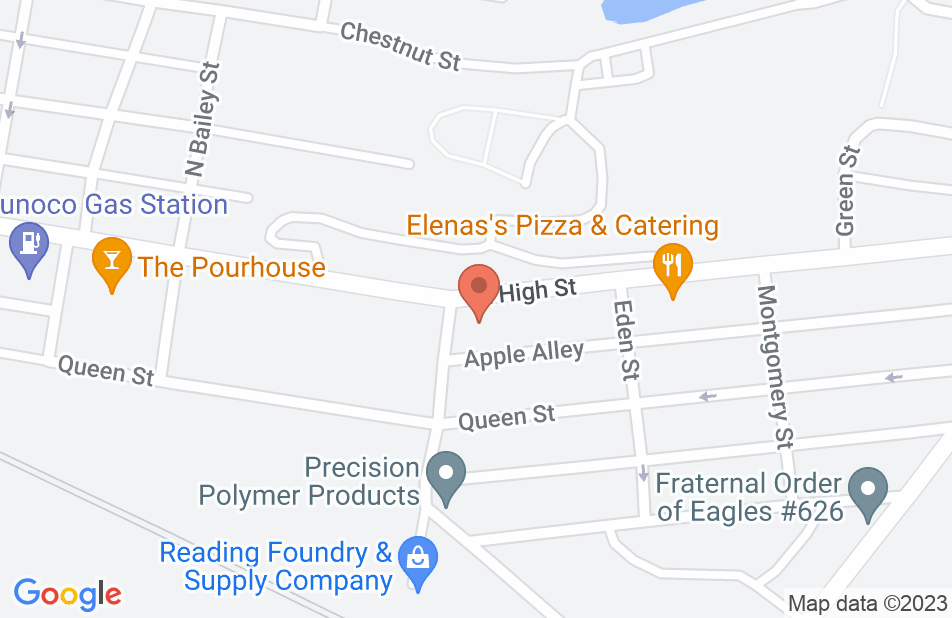 It has been a pleasure working with Mr. Wolf. During a time of great stress and turmoil he was very supportive, professional and always working in my best interest and the interest of my child. Communication was not only warm and personable, but any time I had a question or concern, he was always willing to go over every detail. Mr. Wolf certainly went above and beyond what I would consider reasonable consideration for a client. I can't adequately express my appreciation for his services.

Mr. Wolf is a very professional and knowledgable attorney. Mr. Wolf and his staff kept me up to date on all the proceedings in a timely manner. He also responded to all my phone calls and questions. I would recommend Wolf Baldwin and Associates for any Workers Compensation case or any case.

It is about my workman's comp case.

Just a few words to describe my lawyer. He is a man of high integrity, he is honest and trustworthy, as well as being patient, kind, and understanding. I would highly recommend his services if you should need them. Sincerely, Deborah.
This review is from a person who hired this attorney.
Hired attorney

When my injury at work occurred, I never even considered retaining an attorney. Everything seemed clear cut and assumed everything would, such as medical treatment, physical therapy, and most important, weekly compensation wages, work like clockwork! To my surprise, and utter disappointment, that was not the case! I would get paid a few weeks, and they would suddenly stop my weekly pay with no explanation or reason! After repeated calls and emails to the insurance company with very little correspondence on their end, they finally contacted me offering a very low settlement buyout. I knew I needed to speak to a lawyer who specializes in Workman's Compensation Law, and was referred to Levi Wolf by an attorney I called to see if he knew anyone. Levi was great from the beginning. Got back to me immediately, scheduled to see me within 48 hours, thoroughly listened to my story, and explained what we were looking at and what was fair for me moving forward. Within a few short months, multiple surgeries, and negotiating, we certainly agreed to a financial amount and significant period of time for medical coverage as I continue to heal. Everytime I got anxious to settle for less along the way, he was confident in what he thought we would receive the whole time, and gave me the hope to follow his lead throughout. He was right all along. I would strongly recommend him to anyone if you are injured at the workplace! Thank you Levi!
This review is from a person who hired this attorney.
Hired attorney

My husband and myself had the pleasure of meeting Attorney Levi Wolf. We had Levi draw up our wills and he explained everything thoroughly and i Informed us of everything we needed to do. After all that was said and done it was a good experience. I recently had to contact Levi on a WC matter and he helped me through this very stressful time in my life. He was very patient and understanding, and listened to all my concerns.Most of all he was always there to answer my many questions. If anyone is unsure about getting an attorney, I highly recommend to give Levi a call. I do not have enough words to express my gratitude for everything he had done for me. I would like to say thank you Attorney Wolf for helping me through this awful experience.
This review is from a potential client who consulted with this attorney.
Consulted attorney

Levi and his team made all of my options clear & concise. There were no delays in follow up, everything was professional. Levi is a gentleman and a knowledgeable and respectful advocate and we highly recommend him.
This review is from a person who hired this attorney.
Hired attorney

I consider myself very fortunate to have had Levi Wolf referred to me as a workman’s comp attorney. From our first meeting, I felt he was an experienced professional . He always communicated with me through the whole process and readily explained anything I didn’t understand. His many years of experience benefited me in making choices that were necessary to win our case.
This review is from a person who hired this attorney.
Hired attorney

Happy to have met at a very difficult time for me

I was seriously hurt at work and had to have 2 back surgeries in 2 years. Initially I didn’t have much trouble from workman’s comp. but after the second surgery, they became difficult to work with. I called Levi after a doctor advised me to consult a lawyer. He explained everything to me very well and was always professional. He always got back to me quickly and I never had to wait on his office for anything whether it was a question or paperwork. He relieved me of the stress of dealing with all the workmen’s comp. phone calls and representatives that kept asking the same questions and asking for more information from the doctors. In the end, he was able to help me come to a settlement with workmen’s comp. that will allow me to find the medical care I still need, but without all the headaches.
This review is from a person who hired this attorney.
Hired attorney

I would recommend Levi wolf to anyone in need. He handles his cases At a personal and professional level. He is thorough and good at explaining the process I am thankful for all that he has done .
This review is from a person who hired this attorney.
Hired attorney

I contacted Levi Wolf through AVVO and met with his associate Daniel E. McCabe in West Chester, Pa. Daniel was very helpful, he explained the process and what to be expecting and how he would take care of my problem. I left the office feeling a great relief that I had someone to stand by my side to take on workman's compensation.
This review is from a person who hired this attorney.
Hired attorney
See all reviews

I worked on a Worker's Comp matter with Levi. He is a highly skilled attorney, and a very well qualified practitioner.

I have had the pleasure of spending time with attorney Levi Wolf discussing a wide range of legal matters. Levi is a terrific lawyer, a patient listener, a zealous advocate, and a compassionate person. I strongly and enthusiastically recommend him without reservation.

Levi and I work together for just under 10 years. I've known him for longer than that. He's one of the best attorneys I know, period.

Levi is both knowledgable and personable.I highly recommend him!

I endorse Mr. Wolf as a well-respected and knowledgeable attorney.

I've known Levi for many years. He's a great guy and great attorney. I highly recommend him for anything involving workers compensation.

Levi Wolf, Esq. is a hard-working, organized and smart lawyer. He is very experienced and I have seen him and his law firm get great results especially in worker's compensation, as well as family law and estate matters for clients. I continue to recommend his expertise.

As as an attorney concentrating on Workers Compensation issues, Levi Wolf's credentials are impeccable. However, the overriding basis of my recommendation is Levi himself: Levi is professional, yet personable; he is knowledgeable, but approachable; he knows the law, and knows people; Levi is an attorney whose work ethic is matched by his sense of ethics. I endorse Levi as an attorney, and am happy to call him a friend.

I have known Levi for many years. He is bright, incisive, organized and well spoken. He represents his clients aggressively and with compassion. He truly loves being a lawyer and helping people. I have referred clients to Levi and would not hesitate to use him myself.

Over several years practicing workers compensation law, I have had several opportunities to see Mr. Wolf in multiple professional settings, and I am always impressed. Levi is a true professional and I am fully confident that his clients are consistently satisfied with his services.

I have known Levi for over ten years and have worked with him in the Solo and Small Firm Section of the Pennsylvania Bar Association. I have attended seminars planned and presented by Levi and have had numerous other opportunities to observe his expertise. Levi has all of the experience, knowledge, and skills one could desire in an attorney, and his personable nature makes working with Levi a pleasure.

I have personally witnessed Levi in court. He has superb courtroom skills and he is extremely knowledgeable. I was also a member of a panel that he was on at a seminar. Levi was well versed on the topic and provided insightful answers to the attendees. I would recommend him without hesitation.