In addition to his legal skills, Adam L. Dean is well known for his booming voice that resonates throughout a courtroom.   Licensed in both the states of Oregon (1995) and Washington (2001), Adam is experienced at representing clients facing criminal charges, divorces, administrative hearings, and appeals.

Prior to becoming an attorney, Adam worked as a master level social worker in numerous public and private social service settings. This experience provides him with a unique perspective which is often utilized in both the family and criminal law settings.

Adam received his undergraduate degree from the University of Wisconsin, Eau Claire in 1990. He received a Master’s in Social Work (MSW) from Washington University in 1992. He received his J.D from Marquette University in 1995. He also was a visiting student at the Northwestern School of Law at Lewis & Clark College. He is a member of the state bars of Oregon, Washington and Wisconsin. He also practices in federal court in criminal cases and civil forfeiture and has been admitted to United States District Court for the District of Oregon and the Western District of Washington.  He is a member of the Multnomah County Bar Association,  Clark County Bar Assocation, and Oregon Criminal Defense Lawyer's Association.

Outside of work, Adam enjoys watching the Green Bay Packers with his family and other activities such as swimming, camping, hiking, and fishing. 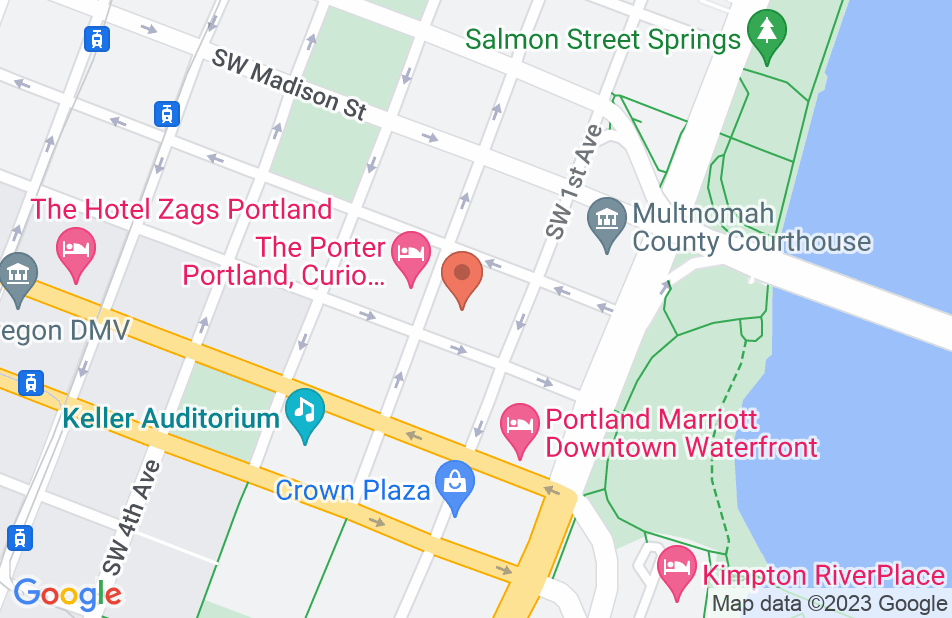 Adam .. what an amazing attorney! He was so strategic in approaching the criminal defense and trial for a family member who was facing five measure 11 counts. A total acquittal/not guilty verdict was achieved because of him. Not only does he have a caring personal approach with family, he helped us navigate through a complicated, complex situation. Adam was so very respectful and dynamic with the jury too, engaging them when he countered all accusations. They paid close attention. Also exposing how the prosecution, investigative detective and the other "professionals" were incompetent and unprepared for a trial that NEVER should have occurred. He did an AMAZING job and I would highly recommend him. Thank you Adam for giving our life normalcy again!
This review is from a person who hired this attorney.
Hired attorney

Adam Dean is a rock star attorney. Hire him and you wont regret it.

When I went to Adam Dean in search of an attorney after another attorney had completely let me down, I had little faith in finding someone competent that could fix the incredible mess that I had gotten myself into legally. Adam Dean was someone that I felt I could trust right away. After he got up to speed on my case, he was one hundred percent committed to finding a creative solution and doing whatever he could to get things on the right track. He went above and beyond, even going to another county to assist with the case. Adam Dean truly wants to win your case, its not just lip service. He is aggressive when he needs to be. This man fought for me. He will work with you financially. I cannot say enough positive things about his representation.

Adam worked for the dismissal of my case for over a year and was extremely responsive every step of the way. My case was an embarrassing one for me and Adam was very professional and non judgmental. He understands that bad things happen to good people and he will fight for you even when the circumstances are unusual. Adam's paralegal Dawn was an amazing help to me, she was highly sympathetic to my position and was able to catch a miscommunication that could have potentially prevented me from completing the requirements necessary for the dismissal. I'm happy to say they were successful in getting my case dismissed. I am thoroughly satisfied with the work these great people did for me and I will turn to them first in the future and highly recommend them to anyone needing legal representation.
This review is from a person who hired this attorney.
Hired attorney

The best attorney who is passionate and extremely knowledgeable!

I had a DUII conviction and did my treatment and completed it on time. However the court was requesting another 90 days of UA testing. I hired Adam and he was very transparent about how this case could have ended. He not only gave a comparing case to show that my case should be dismissed but he did so with the most professional way during our hearing. Because of all his hard work and extensive knowledge of the law I would highly recommend him!
This review is from a person who hired this attorney.
Hired attorney

Serious charges regarding a false confession.

This was a very complex case!! Adam was amazing to watch in the courtroom. Very detail oriented and will not settle for nothing less than the truth. Personally very easy to understand and went way above and beyond to help us.
This review is from a person who hired this attorney.
Hired attorney

Having Adam as an attorney was a miracle, he worked hard was honest and fought hard for my rights. Without him things could have gone awry. If you need help he is the man you want in your corner.
This review is from a person who hired this attorney.
Hired attorney

Wow. Just wow. It's truly a miracle I found Adam to be my lawyer. I was arrested and charged with many serious crimes and I thought I was going to be in jail for a very long time. Adam listened to me and treated me with respect and compassion every step of the way. I didn't believe it was possible but he got every single arrest and charge expunged. I can now go on to live my life and pursue my life's passion with all of this behind me. I will recommend everyone I know to Adam if they need legal help. God bless you Adam and Dawn (his paralegal who is an amazing person and is absolutely brilliant). You both went over and beyond for me. I am so blessed to have you both work with me in my case. If you are looking for a lawyer who will listen to you, treat you like family, and make the impossible possible CALL HIM! My family and I keep Adam and Dawn in our prayers every night for our thanks. Do you know many people that can say that about their lawyers? Calling Adam was the best decision I have ever made.
This review is from a person who hired this attorney.
Hired attorney

FACING SERIOUS FELONY CHARGES IN WA AND OR AND WALKED AWAY WITH CASE DISMISSED!

If you are looking for a lawyer that will be honest, responsive, supportive, and caring. Adam is the answer! After my initial consultation it was not even a question that he was going to be my lawyer. I was facing a charge in WA and charges in Oregon as well. I was looking for a lawyer who would be aggressive when aggression was necessary. Adam never sugar coated situations which is what a great lawyer will do. Adam will fight for you and fight for your freedom. The criminal justice system can swallow you whole and without a lawyer like Adam it's tough to deal with. Adam's paralegal Dawn is awesome also. They best thing about them is the responsiveness. If I had a question or concern that wasn't answered immediately, it was never more than a few hours before being contacted back. GO IN FOR A CONSULTATION AND I PROMISE YOU YOU WONT BE DISAPPOINTED. EVERY CASE IS DIFFERENT BUT THEY ALL NEED A SOLID EXPERIENCED LAWYER. THANK YOU ADAM!!
This review is from a person who hired this attorney.
Hired attorney

I am extremely grateful n thankful for having hired Adam. From our very first meeting & throughout every aspect of representing me in two separate cases simultaneously, he went above & beyond in doing his due diligence, keeping me informed, and representing me in court. He is a straight shooter and does everything possible in resolving your case. I highly recommend him.
This review is from a person who hired this attorney.
Hired attorney

Amazing job as an attorney

Mr Adam Dean I am please and honored to say that he did an amazing job for my son. We found Adam Dean on line and went with all his positive reviews and so happy that we made the right choice in picking him. He believed my 13 year old son and fought for him like if he was his own son. Because of him my son will NOT be going away for 7 years for a crime we believe he didn’t do. Adam made us feel extremely comfortable at first sight and when he talked to us we were 100% confident that he was going to give it his all. ( which he did In such a professional manner) A huge Thank you to this amazing attorney Adam Dean.
This review is from a person who hired this attorney.
Hired attorney
See all reviews

I refer close friends and clients alike who are in need of a top notch criminal lawyer.

Adam Dean is an exceptional attorney. He brings reason and a strong understanding of the law on behalf of his clients. We have worked on several cases together and all had successful resolutions. If you are need, call Dean.

Adam is an excellent attorney. He is dedicated, driven and very competent. Adam has considerable experience in felony defense and an incredible presence in the courtroom. I highly endorse him.

I have known Adam both personally and professionally. He is a zealous advocate for his clients, both in the courtroom, and at the negotiating table. Adam and I have worked together as opposing counsel on several difficult matters; he is always tough, while remaining exceedingly courteous, and professional throughout. I strongly endorse this lawyer.

I met Adam years ago and we have become friends. Professionally I deal with Adam when I seek his input on cases I have. He has given his advice freely and I have found it most helpful. I recommend him highly.

I endorse this lawyer. Adam is a great lawyer, hire him!

I have worked with Adam Dean for over six years. Mr. Dean's trial skills make him one of the most effective criminal defense attorneys in Oregon.