In 2013, Sanaz was chosen by a panel of San Francisco Superior Court judges to serve on the Bar of San Francisco's Indigent Defense Panel and Juvenile Delinquency Panel. Sanaz dedicates approximately 25% of her practice to representing individual adults in criminal cases and minors in delinquency cases who are not able to afford their own legal counsel.

Before founding Dean Litigation, Sanaz was an assistant district attorney, where she spent almost eight years in the felony trial team prosecuting adults charged with violent crimes. She was nicknamed the "DA of Death" due to her remarkable trial skills and ability to obtain favorable verdicts, even on very challenging cases.

Sanaz is known for litigating numerous high profile cases, some which have received international coverage. Click here for a list of cases.

While at the San Francisco District Attorney's office, Sanaz was one of the two attorneys who was specially assigned to a federal grant to prosecute those with exetensive criminal records who committed serious or violent crimes in a predetermined high crime area (designated by the federal government). Most of her caseload involved prosecuting multiple co-defendants, and individuals who were charged under the three strikes law, or those who had caused significant bodily injuries to others.

Sanaz spent years as an activist, shedding light to the abuse inside of Iranian political prisons, and women's rights in Iran. She has numerous publications in this area, and had numerous speaking engagements on satellite T.V., radio, and universities.

In 2006, Sanaz was honored by now Lt. Governor Newsom, then San Francisco Mayor, for her role and contribution to the Women of Iranian Diaspora. Sanaz has also founded and has been involved in establishing several Iranian society and professional organizations in Northern California, which continue to thrive.

After graduating from University of California, Berkeley, Sanaz went to Golden Gate University School of Law on a full academic scholarship, and was admitted in the honors lawyering program. She also received a certificate of specialization in International Law with distinction in honors. While in Law school, she competed in the international moot court and won the 2nd place award. In 2001, during judicial externship in the Iranian Municipal Courts, she presented a new interpretation of Islamic Constitutional Law that was later adopted in a case involving a Chinese Ambassador in Iran. 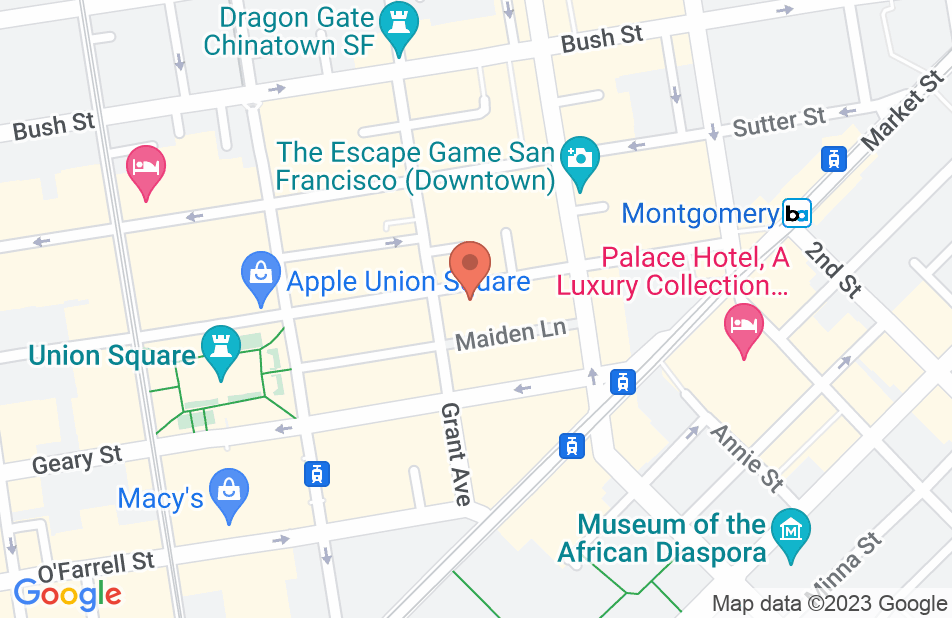 Sanaz is knowledgeable, responsive, and becomes an advocate on your behalf. I was thoroughly pleased with my interactions with her and the staff at Dean Litigation and impressed by her ability to think both tactically and strategically regarding the case at hand. She's no-nonsense, cut-to-the-chase, and aggressive when she needs to be. I would recommend Sanaz and though I'm hopeful I won't require her services again, should the opportunity arise, she and Dean Litigation will be the first I call.
This review is from a person who hired this attorney.
Hired attorney

I've worked with Sanaz over several years in various capacities - as co-counsel in family law matters, opposing counsel, and consulting colleague. In each capacity, Sanaz proves herself to be a real advocate - she watches out tirelessly for the client. Sanaz practices law with a keen intelligence, cultivated through high level legal experience, and professionalism that wins the respect of colleagues, like me, and the court. Not only is she smart, really smart, but she has a genuineness about her that inspires personal confidence. Sanaz deals with tough cases in criminal law and family law, and despite the challenges that these cases bring, she maintains a healthy sense of humor and a deep, genuine sense of compassion for the difficulties parties are facing. If you need a smart, compassionate advocate in your criminal defense case or family law matter, Sanaz is a great choice! I recommend her with confidence.
This review is from a person who hired this attorney.
Hired attorney

I rarely write reviews, but felt that Sanaz really deserved one (Especially as I was not the most pleasant or rational person through this.) She is an excellent attorney who is patient and experienced. I liked how she had a strategy and a plan B, and kept me informed throughout the whole process (regardless of it being midnight or a weekend). She also put my expectations in check. I also appreciated how she would pick n choose battles and didn't waste money. Thank you sanaz. Thank you for everything you did for me. You went beyond what any attorney would do.
This review is from a person who hired this attorney.
Hired attorney
Sanaz Nikaein's response: Thank you! I would appreciate it if you can email me so I can personally thank you. (Unfortunately, I am unable to see any identifying information for you). Regardless, thank you.

I've worked with Sanaz on various business and a couple of personal matters. I've been in business for 14 years in the Bay Area and she is one of the best in the business.
Sanaz Nikaein's response: Julian, Thank you for this wonderful review. If you kindly email me at [email protected], I would appreciate it. Thank you again.

I interviewed about five attorneys before hiring Ms. Nikaien to represent me in a child custody case. At our initial consultation she outlined exactly how we should proceed in order to get the results I was hoping for. Her strategy was different than other attorneys and she recommended that I hold off on couple of issues as part of her strategy. Although I was a little impatient and wanted it all to be done at the same time, now looking back, I see how it worked out perfectly. I am glad I trusted her and her experience.
Sanaz Nikaein's response: Thank you, Nadi. I understand how difficult it is to be in a legal battle and to put all your trust in someone else's hands. I appreciate your patience and trust in my strategy and waiting on a few issues. I am happy that you did, which in turn, resulted in having the tactical advantage we needed in your case, and ultimately getting the best results for you.

My case was dismissed

The judge told me I was lucky to have Ms. Nikain represent me before granting our motion to dismiss evidence the police had against me. The district attorney had to dismiss my case.

Ms. Nikaein was recommended to me by a friend. Ms. Nikaein always kept me informed about my case, and what to expect next. The way she handled opposing counsel and her knowledge of the law, was truly a game changer in my case. I highly recommend her.
Sanaz Nikaein's response: Thank you Marie. It was a pleasure working with you on your case.

Ms. Nikaein provided invaluable service on a criminal matter that resulted in a positive result for me. I am positive that her experience as a prosecutor allowed her to successfully navigate through the prosecution in my case. Ms. Nikaein was able to call numerous bluffs in my case that ultimately prevented me from accepting an unfair settlement. She was aggressive and argued for my rights and I couldn't be happier with the result. I will never go to court without her!
Sanaz Nikaein's response: Thank you for your confidence and trust which enabled us to get the best settlement in your case. I hope you will never have to go to court again, but if you do, I will be by your side.

One of the best I have ever seen

Ms Nikaein represented me on a personal matter and demonstrated excellence in her ability to focus on the critical facts in my case. As an expert in several areas of law, and in my case family law, she demonstrated that her depth of knowledge and experience places her at the highest level of competence in her field. She skillfully prepared my case and tactfully cross-examined our opponent resulting in a very favorable outcome. I was also impressed with her determination to ensure that injustice is not tolerated. She is very quick on her feet and has the ability to respond to inaccurate statements and ensure the truth is extracted. I highly, highly recommend Ms. Nikaein and encourage anyone in need of her services to consider her very capable abilities.
Sanaz Nikaein's response: Thank you Kieron for your kind words and trust. I am very happy that justice was served on your case.

I highly endorse Mrs. Nikaein. Truly exceptional and caring attorney who produces great results in representing clients! I want all people with legal problems to contact her first.

I endorse this lawyer for her dedication to the community.

Attorney Nikaein is terrific, a fantastic attorney who fights for her clients and protects their rights. If a friend or family member of mine was arrested, I wouldn't hesitate to refer them to her.

I endorse this lawyer. She is well respected in her field.

I endorse this excellent lawyer. She is smart, capable, and knows the law, she represents her clients with loyalty and skill.

I endorse this lawyer. She is smart and capable.

I have known and worked with Ms. Nikaein for several years now. She is an extremely knowledgeable and experienced attorney. Whenever anyone contacts me for representation in criminal or family law matters, I contact her immediately. Ms. Nikaein is a skilled trial lawyer and a great advocate for her clients. I highly recommend her!

I endorse this lawyer without reservation. I believe Ms. Nikaein is an extremely talented and well respected attorney in the legal community. I recommend her to anyone looking for a criminal defense or family law attorney.

I endorse Sanaz Nikaein. Hard working and aggressive attorney who is dedicated to the success of her clients. Respected by her colleagues within the legal community.

Not only do I endorse this lawyer, but I also give them five stars for their tremendous work with the community.

Sanaz and I worked together at the DA's office of San Francisco. Although I never had the pleasure to see her in the courtroom, I can only imagine how effective she would be on the jury, judge and opposing counsel by observing her behind the scenes. She worked tirelessly on her cases and paid close attention to detail. I would trust her with my own cases if I have additional work to give to her.

Sanaz has long been known in the criminal defense community for integrity, courage and compassion (in addition to being a first rate trial lawyer). If I were in trouble she is one of the first lawyers I would call.

I endorse this lawyer. I have found Ms. Seo to be a very professional and ethical advocate and wholly dedicated to serving her client's best interest.

I endorse this lawyer for her knowledge, passion, and indefatigability. And if she can't help you, she'll point you in the direction of someone who possibly can.

I have known Sanaz for many years and we have have worked as opposing counsel on several matters when she was a deputy district attorney. I found Sanaz to be a smart and compassionate Attorney. I would refer my family and friends to Sanaz in a heart beat. She is a true credit to the community and the legal profesion.