Striving to preserve civility and respect during the divorce process, Whitney educates her clients about the legal process, working closely with them to ensure they understand their options and rights so to empower them in making the best decisions for the future health of their family.  Her goal is to serve each client individually, striving to find real-life workable solutions for the families she serves, realizing that a marriage might be over but a family still stands.Many times, the best approach requires taking the decision-making power out of the judge’s hands and squarely putting it back into the hands of clients, those who know what their families need the most, in collaborative divorce or mediation.  Sometimes, that's not possible and the case has to be taken to a courtroom.

Having practiced domestic relations in Tennessee for nearly than a decade and a half, Whitney offers clients a skillful blend of trial and courtroom experience with a cultivated understanding that litigation isn't best for each family.

Whitney is a two-time University of Memphis graduate; she received a Bachelor of Arts degree in 1998 and her Juris Doctorate from the Cecil C. Humphreys School of Law in 2001. Whitney served as an extern to U.S. Magistrate Judge Diane Vescovo while in law school, and as a clerk to U.S. District Court Judge Daniel Breen following law school. She began her domestic relations career in Chattanooga, working as an associate in an established family law office. Returning home after spending a few years in Colorado, Whitney worked at an national domestic relations litigation firm in Memphis and Franklin before starting her own practice in downtown Franklin.

Whitney has practiced domestic relations exclusively since 2010, and she is a Rule 31 Listed Family Law Mediator.

She also has served on the Boards of Directors for the University of Memphis Band Alumni Association and for DuBose Episcopal Conference Center.

Whitney enjoys living in her husband's hometown of Franklin with their two small children.  In her free time, she loves fantasy football and her Memphis Tigers. 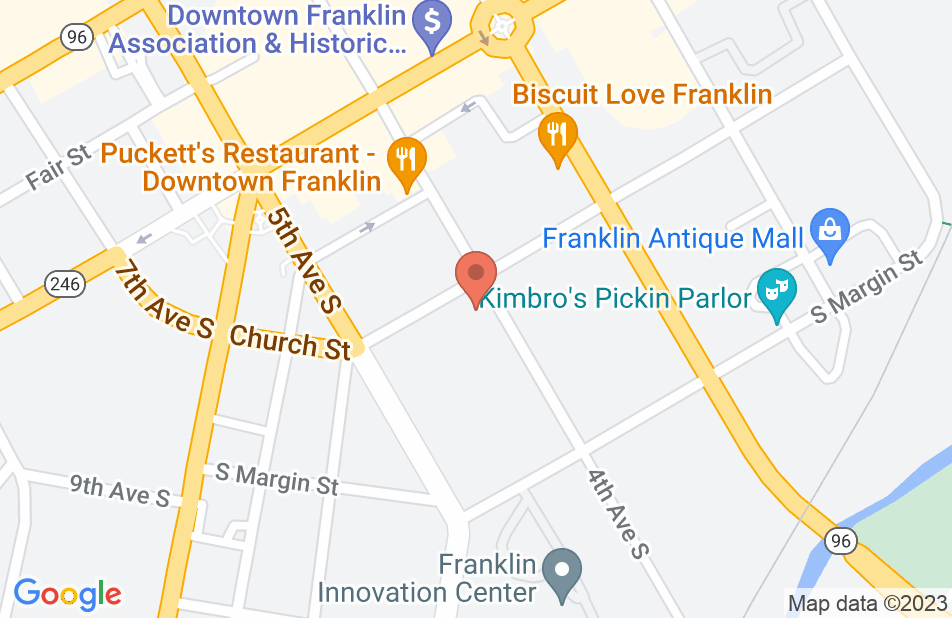 Professional, easy to work with

I consulted Ms Harrington in a child custody case. She was very helpful, responsive and professional. She did everything she could to make this situation as easy and comfortable as possible. I highly recommend her.
This review is from a person who hired this attorney.
Hired attorney
Whitney Harrington's response: Thank you for your kind review of my representation, Linda. I was pleased to represent you, and I hope you know you can contact me again if you ever need further assistance.

Whitney was my attorney for my divorce this past year. I was totally lost and had no idea what to do. She immediately gave me the sense that I could rely on her, and let some of my worries go. It's hard to try to focus on details in such an emotional situation, I needed someone else I could depend on who knew what needed to be done. Whitney was caring and compassionate, but also firm, competent and efficient. Divorce is awful, but Whitney got me through it and helped me feel in control. I would not hesitate to recommend her to others in the same boat.
This review is from a person who hired this attorney.
Hired attorney
Whitney Harrington's response: Thank you very much for taking the time to write of my representation and your experience. I am very glad to have had the opportunity to work with you in your divorce matter, and I greatly appreciate the confidence you have shown in me by recommending me to others. Please call upon me when I may be of further service to you, your family, and friends.

So grateful for Whitney!

We used Whitney for help with a custody and she did a great job. She was fair, honest and we adopted a lot of her suggestions into our new parenting plan. I would highly recommend her to anyone.
This review is from a person who hired this attorney.
Hired attorney
Whitney Harrington's response: Thank you for your kind review of my representation of you and your family. I was pleased to represent you, and hope that you know you and your friends and family may call upon me when I may be of assistance to any of you.

So Glad I Found Whitney!

Whitney is always prompt in her responses to questions and concerns I may have. When I have unexpected developments from my divorcing spouse, she is quick to provide council on how to best approach the situation. I have been very happy with Whitney. When we are in court or preparing for court I feel like she knows my case inside and out. When we are discussing strategy or why the opposing counsel is doing what they are doing, she is spot on. Not only has Whitney been excellent to work with, but any interaction I have had with other attorneys, paralegals, or administrative staff has been professional. I am extremely pleased with Whitney and how she is handling my case. She gives me the feeling that she cares about me not only as a client, but as a person as well. We talk about what is going on in my life outside of the court room like she recognizes that I am more than just what is happening in the divorce, but I have all the other aspects of my life that I am trying to rebuild. It is very reassuring to have her fighting for my rights as a father, to spend as much time with my children as possible, and to ensure I have the financial ability to support myself and my children.
This review is from a person who hired this attorney.
Hired attorney
Whitney Harrington's response: Thank you for your review, and your kind comments regarding my representation and work on your behalf. It was my pleasure to represent you, and I am glad that you were pleased with my help in what I know was a very difficult time in your life. I hope that you know you are welcome to call upon me when I can be of assistance to you and your family in the future.

Do Not Use This Company

Ms. Harrington was a poor lawyer. After spending $4,000 for her services and getting nothing done, I had to spend an additional $1,500 simply to have her removed as my lawyer. Her company charged me $1,500 to file papers with the court instead of simply allowing me to do this like my past lawyer.
This review is from a person who hired this attorney.
Hired attorney
Whitney Harrington's response: I am sorry you had a bad experience with the firm. Since you posted your review anonymously, I cannot look into your situation. If you will contact me directly I would be happy to investigate and do what I can to address your concerns.

I had a divorce case against another lawyer. Whitney took over the case from that lawyer, and completely turned the case around. Where it appeared that our clients were inevitably destined for a contentious trial, her sound legal advice and strong negotiation skills quickly resulted in a favorable settlement that saved both clients thousands in unnecessary legal fees. Although I have not used her yet as a mediator, I expect that her demonstrated ability to see the big picture and think outside the box for win-win solutions will serve her well in that role.

I have worked as opposing counsel with Ms. Harrington and have found her to be hard-working, trustworthy, and extremely knowledgeable. I endorse her with no reservations.

II've known Whitney since we were in college together. We have also been opposing counsel on some divorce cases. She is an excellent attorney and one of the smartest and most savvy attorneys that I have worked with in my 12 years of family law practice.

I had a divorce case against another lawyer. Whitney took over the case from that lawyer, and completely turned the case around. Where it appeared that our clients were inevitably destined for a contentious trial, her sound legal advice and strong negotiation skills quickly resulted in a favorable settlement that saved both clients thousands in unnecessary legal fees. Although I have not used her yet as a mediator, I expect that her demonstrated ability to see the big picture and think outside the box for win-win solutions will serve her well in that role.

Whitney is a great lawyer. She's tough and stubborn, but in a good way, and very smart!

Whitney is an amazing attorney and very genuine and honest person. She is great to work with and well respected in the legal community.

Whitney is an excellent litigator. Always prepared and well respected in the family law arena.

Whitney is a strong litigator and has a great reputation for her dedication to her clients. I recommend her.

Whitney is very experienced and knowledgeable in the area of family law, and she's committed to providing excellent representation for her clients.

I endorse this lawyer. I have known Whitney since she and I were students at the University of Memphis law school. As a fellow law student, Whitney impressed me with her detailed preparation and excellent grasp of the many complex issues we were learning about for the first time. As an attorney, Whitney has continued to impress me with her legal expertise and her excellent case preparation, but more importantly with the professional manner in which she interacts with other lawyers, clients and judges.