A native of Detroit, Michigan, I proudly became an attorney more than 30 years ago, and since then have handled over 5,000 successful cases for my clients. I personally handle injury claims of all types including automobile accidents, dog bites, premises liability, medical care mistakes, police false arrest & excessive use of force, clergy misconduct including sex misconduct and defamation including libel and slander.  I also specialize in family law matters such as divorce & child custody and have vast experience across a wide range of cases including criminal law, contract and business law and employment law. 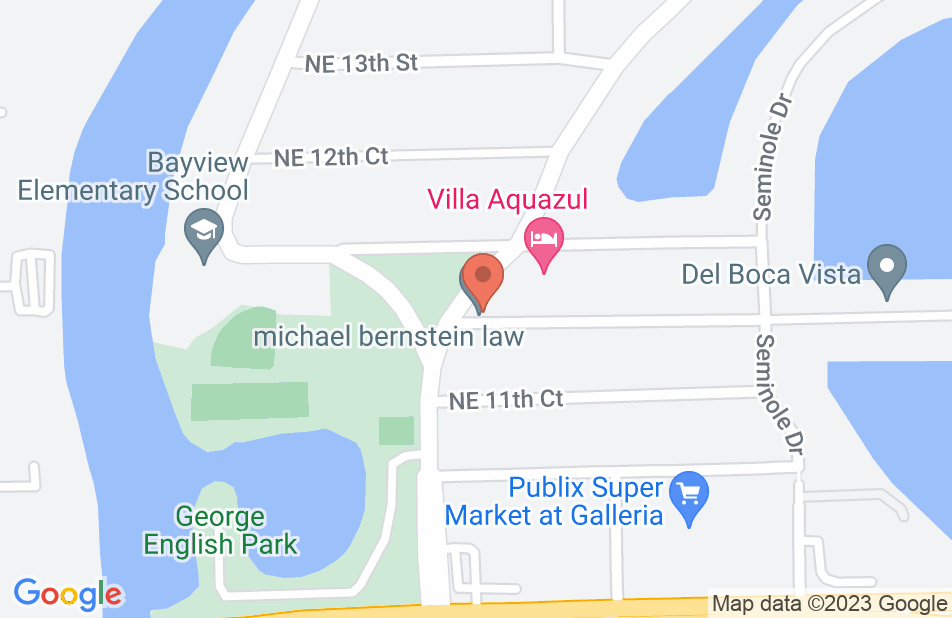 Eighteen years of chaos stopped the day Mr. Bernstein became my lawyer. I would recommend him to anyone that wants to have peace in their life along with the benefits of an exceptional attorney. Michael is dedicated to his clients in getting what is best for them. Thanks to him, my life is finally restored again.
This review is from a person who hired this attorney.
Hired attorney

So thankful I hired Michael Bernstein.

Through a painful and difficult process that a divorce can be, my lawyer, Mr. Bernstein has been great! He was always compassionate and patient, but also had my best interest and my back. If you're looking for a great lawyer who knows the laws in and out and a strong representation in your case, Mr. Bernstein is your man! I am so thankful for hiring Michael Bernstein.
This review is from a person who hired this attorney.
Hired attorney

Mr. Bernstein is quite eloquent and able to help. He asked for my file in an accident case.
This review is from a potential client who consulted with this attorney.
Consulted attorney

What a quick respone and wise answer..

Want to say thanks for your time and advice.. Wishing you many blessings.
This review is from a potential client who consulted with this attorney.
Consulted attorney

I really appreciated the fact that Michael took time out of his busy schedule to help me with my question on Avvo. Great advice too by the way!
This review is from a potential client who consulted with this attorney.
Consulted attorney

I called attorney Bernstein about a lawsuit that I had pending and he was very knowledgeable. I was very surprised that he was willing to help me and answer some concerns that I had . I would recommend him to anyone that wants personal service and takes the time to help you and cares about your problems . Thank you for your help .
This review is from a potential client who consulted with this attorney.
Consulted attorney

After been in my divorce case with two lawyers with still no knowledge of the law. Michael in a hour of consultation did what both of them didnt, explained every step of the way. Took his time to come with me to deposition, was very efficient and helpful, would strongly recommend him!
This review is from a potential client who consulted with this attorney.
Consulted attorney

He is very caring

He is a very caring man who helped me in my time of need. I appreciate him taking time out of his life to help me with my situation...I just wish he lived in cali so that I could hire him...
This review is from a potential client who consulted with this attorney.
Consulted attorney

Excellent First Experience with an Attorney!

While driving home one night I was injured by a drunk driver in a car accident; I had no idea where to begin to pay for my injuries and vehicle. After searching and contacting a few of the large publicly advertised firms, I did not feel comfortable and confident that my case would be a priority for them. Frustrated, I asked a family friend if they could recommend a trustworthy and helpful attorney, without hesitation he gave me the name Michael Bernstein. A little skeptical still, I contacted Michael's office and explained my situation to him. Once I finished, and without even being hired yet, Michael took the time to explain the steps I should take in finding an attorney to file my case and that my case actually had a time frame it must be filed in. None of this was ever brought up when I spoke to another firm. I felt confident after just speaking with Michael over the phone and setup a consultation for the next day. Once we met Michael took even more time to explain how the process works, we went over damages, insurance do's and don'ts, documents I needed to obtain, and how long the timetable for the case could be. I never expected an Attorney to break the whole process down like Michael did, he was HIRED! I could tell Michael went to work right away on my case, because not even a week later I received documents from my insurance company stating the process for had begun. Once my case was in full swing Michael would notify me of any updates and actions taking place and he even gave me his PERSONAL CELL NUMBER so I would be able to call and consult him at any time. After a few months we finally had a breakthrough and I was able to receive some compensation for the accident and my damages. At that point I thought the process was done, but Michael wasn't! Michael believed that I should be FAIRLY compensated for my accident and injures and explained there was a second half to my case. We are coming up on 2 years for my case and I am still 100% confident in Michael and truly thankful for such and excellent attorney. I believe that those other firms I contacted in the beginning would have never taken my case this far and fought this hard for my compensation, Michael Bernstein is truly an awesome and tenacious attorney who will do everything in his power to help YOU. I will not goto another attorney after this experience!
This review is from a person who hired this attorney.
Hired attorney

Such care and consideration, with honest results.

I can't tell you how thorough Mr. Bernstein is. Starting with his care and compassion down to his honest, realistic expectations; Mr. Bernstein delivers quality legal help while taking carefully calculating every aspect of a case. What I liked most was his experience in litigation. He is a seasoned professional who has a superb reputation in the community. Highly, highly recommend!
This review is from a person who hired this attorney.
Hired attorney
See all reviews

I endorse this lawyer. He is an impressive Avvo contributing attorney. I appreciate his answers which demonstrate that Mr. Bernstein has the analytic ability that all clients should look for when hiring an attorney.

I endorse this lawyer. Mr. Bernstein's comments on this forum indicate he is a highly skilled and intelligent criminal defense attorney

I endorse this lawyer. Mr. Bernstein is an asset to the Avvo community. He routinely assists individuals with their questions and shows true advocacy for his clients.

A superlative Avvo contributing attorney, the answers of Mr. Bernstein are consistently accurate, analytic and customized to the needs of the Avvo askers. These are exactly the qualities that all clients would look for when hiring an attorney.

A superb and zealous advocate. I highly endorse Michael!

Mr. Bernstein has demonstrated his knowledge and skill on Avvo.com, and he continues to do so in every answer that he provides. It is an honor for me to endorse this lawyer.

I endorse this lawyer. Attorney Bernstein has demonstrated that he is a reputable and knowledgeable attorney. His advice is both legally sound and practical in nature.

Mr. Bernstein is a truly amazing advocate for his clients. Though we are on opposite coasts, I follow him and his exceptional advice to people asking difficult legal questions here on AVVO. He is a great resource.

I highly recommend Mr. Bernstein. He is a detailed-oriented, smart lawyer who will go the extra mile for his clients.

I am pleased to endorse Michael Bernstein. His long record of success as an attorney, including his success in the areas of personal injury and wrongful death, and his very active participation on AVVO, providing legal advice to so many people, are a great credit to the legal profession.

I endorse this lawyer. His contributions to this community show that he is a very knowledgeable and effective attorney

I endorse this lawyer.Mr Bernstein is a very knowledgeable and effective attorney for his clients.

I highly endorse this lawyer. Have known Michael since law school. He is dedicated to his clients and knowledgeable in his practice areas. He is a certified mediator and knows how to negotiate. Importantly, Michael gets the best result in the circumstance.

If you are looking for a personal injury lawyer in the Fort Lauderdale area I would highly recommend Mr. Bernstein.

A true professional. Incredibly knowledgeable. I endorse this lawyer.

I have had the absolute pleasure of working with Michael and there is no question that he is truly a gifted attorney with a plethora of knowledge. He is personable and selfless in his pursuit to advocate zealously for all his clients. I without hesitation endorse Michael.