Attorney Christopher Breault is widely viewed as one of the most effective trial lawyers of his generation. He received a six-figure jury verdict as lead counsel earlier in his career than any other lawyer in Georgia history.  He also received a seven-figure and multi seven-figure jury verdict earlier in his career that any other lawyer in Georgia history.  He is a second-generation trial lawyer from Columbus, Georgia whose law practice focuses on representing people in lawsuits against insurance companies and large corporations.

Chris is a product of the Columbus Public School System.  He grew up in south Columbus and moved to the north side of town at age 13.  He dropped out of high school after only completing the 9th grade and went to work as a concrete construction worker.  In his late teens, Chris went back to school and earned a GED.  He then went to Columbus Technical College and Columbus State University.  He eventually tranferred to the University of Georgia on a Franklin College of Arts and Sciences Scholarship. After graduating with a bachelor's degree in Political Philosophy, Chris attended the University of Georgia School of Law. During law school, he worked as a felony prosecutor in the Athens District Attorney's Office, and was one of the founding officers and President of the Georgia Trial Lawyers Association Student Chapter.

Shortly after law school graduation, Chris went to work as an Associate in the Downtown Atlanta office of a nationally-renowned trial lawyer and children's advocate whose firm has garnered national recognition for obtaining verdicts and settlements of $1,000,000 or more in 257 different cases. While there, he worked exclusively on seven and eight-figure medical malpractice, wrongful death, nursing home abuse, products liability, and truck wreck cases.  He now has his own practice in Athens and Columbus, Georgia.  The vast majority of his work involves helping people who have been catastrophically injured. 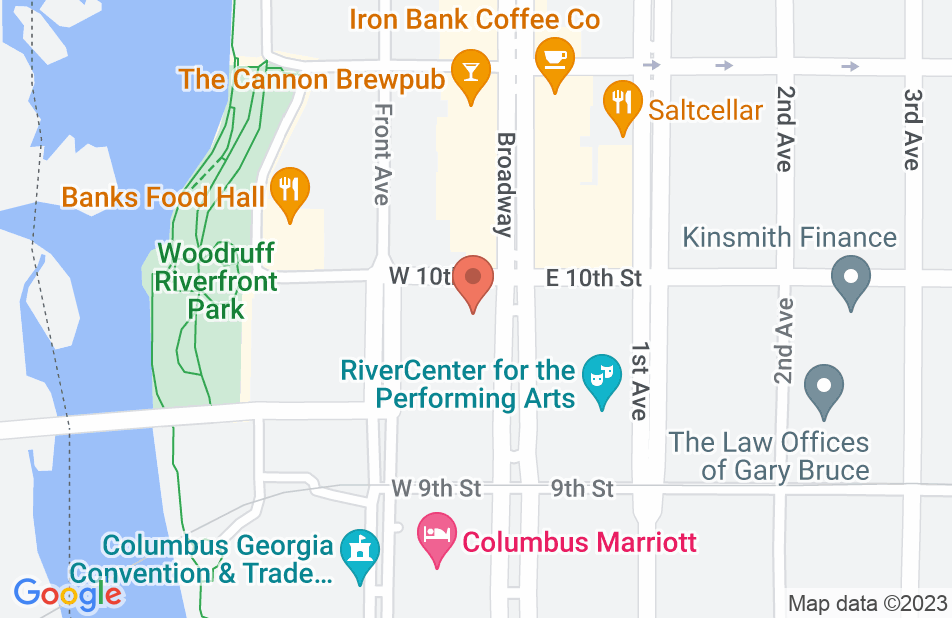 I had been offered a very little amount to settle my case and this attorney was able to turn it from $500 to $13,000. They were able to turn this around in a matter of months after being transferred to them. I appreciate the effectiveness and speediness, and also taking interest in my case unlike other lawyers.
This review is from a person who hired this attorney.
Hired attorney

Attorney has been very fast with my case seeing how I had been transferred from lawyer to lawyer, he got my case and I heard from him and his staff promptly.
This review is from a person who hired this attorney.
Hired attorney

I was in a bad car accident. The other driver rear end me. The insurance company would not help. Chris worked hard on my case and helped me get the justice I deserved. Thanks!!!!
This review is from a person who hired this attorney.
Hired attorney

My case was originally taken by Kanner and Pintaluga, and they were unable to resolve it, so it was sent over to Chris. The case took some time, but he got it resolved. Not only did he get me the maximum amount for my first settlement, but he also got an offer for a second settlement, for the same accident. He is hard working, although he doesn't always call he is always working on the case. Good job Chris.
This review is from a person who hired this attorney.
Hired attorney

We are really happy with the service we received here. We were with another lawyer before and Chris rescued our case. They were going to withdraw it, and Chris took over and it has been great. The case was going to take 3 years and this lawyer moved really quickly in getting everything taken care of. We are really happy with the work he has done. Great lawyer! Good money and fast!

I was falsely charged with 6 different counts of battery after an alleged fight in downtown Athens. Chris came highly recommended by people in my family. I was facing jail time and losing my job. Chris took the case to trial and the prosecutor dismissed all the charges. He did a great job talking to all the witnesses and finding video footage of what happened. I would recommend him to anyone! He really cares and is willing to fight for people in court.

When I hired Chris I'd never met him in person.I did my research and read reviews about his experience and ability to get cases dropped which guided me to hire him.he pretty much showed up for all of my cases without me being present which was perfect for me since I work out of state. Hes very prompt in returning my phone calls and constantly giving me updates. I've never been arrested in my life but I had two felony cases pending which were eventually dismissed and to help me maintain a clean criminal record. .I would definitely recommend him.Thanks alot for your services.

My names is James and while I was still in the Army I was charged with two major felonies with a minimum sentence of 10 years in prison. I was referred to Mr. Breault by a friend and I can honestly say I owe this man my life. My wife and I couldn't be more great flu for his responsiveness and care toward my case. Not only was he flexible with my income after getting out of the army and not making much money but he was tentative and vigilant in getting my case dismissed. I will recommend Mr. Breault to anyone needing a legit and great attorney . Thank you again for your support and council in this case Chris.

Chris did a great job on my case. Another law firm had my case for two years and could not get the insurance company to take me seriously. Chris took my case and immediately filed a lawsuit. Within 4 months, I settled my case for ten times more than the other law firm was going to get me! If you want someone who truly cares about the client and do a good job, call Chris!!

Chris is totally awesome!!! He really worked hard on my case to get me the best settlement. I would recommend him to family and friends. He is the best!!! ;
See all reviews

Chris is an exceptional attorney. When I was a defense attorney, I had a case against him. He was a great advocate for his client. He understood the intricacies of the case, was well-prepared, and professional. Most importantly, his hard work in preparing the case for trial was evident from the start.

Benjamin Osorio, Personal injury Attorney on May 5, 2015
Relationship: Worked together on matter

Mr. Breault is an excellent litigator who strives to achieve the maximum results for his clients. I endorse this lawyer.

I highly endorse this lawyer. I admire his knowledge and dedication to his clients.

Chris is a top rate attorney who fights diligently for his clients. I trust his judgment without reservation.

Chris is a solid lawyer who does not back down from a fight. He is not scared to push the file to get a fair offer/verdict for his client. I strongly endorse him.

Chris is a bright, persistent, and caring lawyer. I highly recommend him.

Chris is an excellent asset and has superb analysis on personal injury cases. I've had the opportunity to work as co-counsel with Chris and he has always done an excellent job.

Chris is a courageous attorney who is not afraid to take cases to trial. He is a credit to our profession.

I endorse this lawyer. Chris is intelligent, sympathetic and, most importantly, a tireless advocate for those who have been injured by the carelessness of others. He is a true champion for the people.

Chris is a bright, dedicated, tenacious lawyer with the will to see every case through to verdict. While many lawyers SAY they're willing to take a case before a jury, Chris is one of the few who really means it--as his history proves. When you combine Chris's extensive experience leading focus groups with his tenacity and drive, you've got one heck of a trial lawyer.

Chris is a successful entrepreneur and an aggressive attorney. He has a fantastic work ethic matched by a relentless drive to secure the best possible results for his clients.

I endorse this lawyer. Mr. Breault is known nationally for his expertise in the law and his capabilities in the courtroom. He is an excellent attorney.

Chris was a leader in school and will make his mark in the civil litigation business. He is savvy, creative, determined and very bright. His entrepreneurial bent will take him places that others do not dare to attempt. He also obtained invaluable work experience when he came out of UGA law school that was as valuable as 5 years of law practice,so he is highly knowledgeable when it comes to assessing the value of a personal injury case. His success in the first three years of practice, as a sole practitioner, is remarkable and a great omen for the future.

Attorney Chris Breault has an obvious drive to represent those injured due to the negligence of others.