PROVEN by former clients to be the BEST. Call me now to defend YOU. My team wants to WIN your case

As a member of the Georgia Bar, AJ Richman has handled thousands of cases including DUI, BUI, underage drinking, drugs, domestic violence, and probation violations. Mr. Richman’s high courtroom success is attributed to his in-depth knowledge of the law and exhaustive approach to investigating cases.

Prior to representing those accused of committing crimes, Mr. Richman was a felony and misdemeanor prosecutor for the State of Georgia. With a certification in Standardized Field Sobriety Testing and DUI detection from the National Highway Traffic Safety Administration (NHTSA), while working for the State, Mr. Richman was chosen to instruct Forsyth and Lumpkin County police officers on these topics as well as courtroom preparation.

In addition to his NHTSA certification, Mr. Richman has received extensive training on the breathalyzer machines used in Georgia’s DUI arrests. 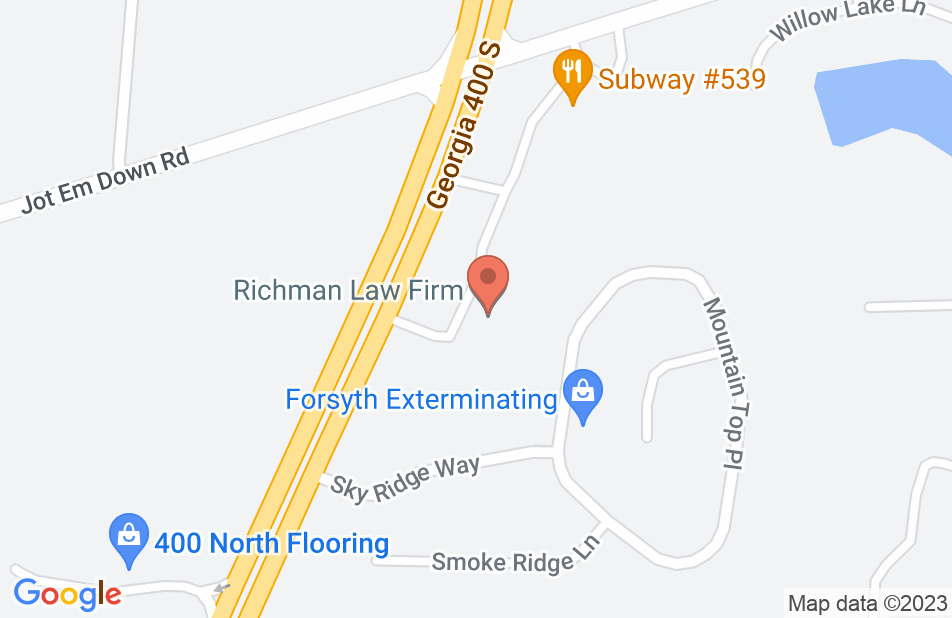 A really great experience with AJ! I feel like he was very professional and handled my case with tact and resolved it with a better outcome that I was expecting. His investigator immediately got on the case and dug up things that were not even found out about in years. His aggressive and go-getter attitude towards resolving my case was really what I was looking for in a lawyer. A++++ recommended, do not look anywhere else but to AJ to resolve your case!
This review is from a person who hired this attorney.
Hired attorney

From day one, we knew AJ was the right choice. Our son needed a great attorney and AJ and his team surpassed that. We were made to feel like we were his only priority. AJ is very confident in what he does. He is honest and keeps you filled in about what is happening every step of the way. Not only does he make you feel like there is light at the end of the tunnel, but you can actually see the light. After 6 months, all charges against our son were dismissed. God Bless You AJ, Ms Lisa and Mr Tate. We highly recommend AJ and his team for your legal needs. You will not be disappointed!
This review is from a person who hired this attorney.
Hired attorney

Mr. Richman provided outstanding legal advice and support in resolving my legal issue. I highly recommend him for any legal issues.
This review is from a person who hired this attorney.
Hired attorney

AJ is, hands down, one of the most competent, professional and caring attorneys I have encountered. From start to finish, I knew I was in good hands and was advised through the whole process. He was responsive and made my family and I feel at ease. He worked during the difficult times and I always felt that I had someone in my corner. I wasn’t just a dollar sign to him. Regardless of months in “interim” and “waiting”, he always made sure to see if myself and my family were doing well. No matter the reason you may need AJ and his team - I will always highly recommend him.
This review is from a person who hired this attorney.
Hired attorney

So thankful for AJ.

AJ helped me get off probation almost a year early. I didn’t believe I’d be a freeman so soon but with AJ that’s exactly what I am today. He kept in touch every step of the way. I recommend him to anyone I know who could be in a tough spot like I was. Thank you again Mr. Richman.
This review is from a person who hired this attorney.
Hired attorney

Aj was an amazing professional lawyer. He communicated well and responded super quickly to any questions I had. I got the outcome I wanted for my case. He didn’t disappoint at all, and I Highly recommend AJ if you ever need an attorney. You will be beyond satisfied with the outcome!
This review is from a person who hired this attorney.
Hired attorney

Mr. Richman and his firm were very professional and informative. They made sure everything was thoroughly explained and understood when going over every aspect of our case. We very much appreciate them and highly recommend their services.
This review is from a person who hired this attorney.
Hired attorney

AJ did excellent job on my case. He is very responsive and I was able to reach him whenever needed. He works hard to get maximum possible positive outcome for his clients.My case had immigration impact. He was very careful and analyzing outcome in the perspective of immigration, job etc. He kept me posted on progress of my case on every stage. He always provides clear and honest feedback. He is very smart and tech savy. He will fight for his client!
This review is from a person who hired this attorney.
Hired attorney

AJ and his team are simply the BEST! I was charged with a DUI in Forsyth County while visiting from out of state. I had never been arrested before and was terrified of what would happen. From the moment I chose Richman Law Firm to represent me they made sure I understood the process and kept me informed every step of the way. Through his diligence and knowledge of GA laws, AJ was able to have my DUI reduced to reckless driving.
This review is from a person who hired this attorney.
Hired attorney

AJ Richman is very confident, aggressive, compassionate, and exceeded my expectations every step of the way. Throughout my time with him he kept me up to date and never missed a beat. With my first experience with the law he kept me calm and uplifted, he is someone to count on and isn't afraid to acknowledge and fight when he feels there is mistreatment. Even after my time with him was done AJ and his staff were and are amazing and still is willing to answer a call from me and answer any questions or go out of their way to help. You can tell he his zealous and passionate about what he does. If it's in his line of work I will always refer someone looking for help to him and him only. I know AJ and the entire Richman Law Firm will always be by my side.
This review is from a person who hired this attorney.
Hired attorney
See all reviews

Ashley Schiavone, DUI and DWI Attorney on May 12, 2016
Relationship: Fellow lawyer in community

AJ is simply one of the best when it comes to criminal defense and trial litigation. He fights for his clients with tenacity, integrity, and genuine concern. I highly recommend his services.

I highly endorse and recommend AJ Richman. He truly cares about his clients and will always go the extra mile for them. He leaves no stone unturned in his trial preparation and has an amazing ability to connect with a jury. I am honored to have him serve as co-counsel with me on a major felony case.

A.J. is a fierce advocate and is not afraid to take a case to trial. He stays up to date on the latest developments in criminal law by attending all of the latest seminars and training sessions. You cannot go wrong if you select A.J. as your lawyer.

AJ is a dedicated and knowledgeable attorney who will do what is necessary to secure his client's rights.

AJ is top-shelf. AJ is a dedicated, intelligent and aggressive lawyer who clients can count on. Highly endorse AJ and his firm.

I have known AJ for along time, and he is a passionate, dedicated individual. His clients are in great hands.

I have known AJ for some time now, as we was a prosecuting attorney in Forsyth County. I always found him to be professional, respectful, and well versed in his area of practice. I am confident he will take those skills he obtained as an attorney for the state and utilize them to advantage his clients in the private sector.

I endorse this lawyer. I have litigated against AJ when he was a prosecutor -- and a fine prosecutor indeed. His knowledge of criminal law and procedures are top shelf and he was a very skilled DUI prosecutor. Now all those skills will be put to use in defending those charged with crimes. I often picked AJ's head for advice and I will not hesitate to give him a call -- especially on DUI cases. Defense attorneys with backgrounds in prosecution and law enforcement profit greatly from knowing both sides of the fence. They are quick to pick up on Issues they KNOW have to be wrong. I look forward to working with AJ again when we are both on the same side!

AJ is very knowledgeable of the law. We had a case as opposing counsel and he was a very worthy opponent. As he goes out in the private sector, I know that he will approach the defense of his clients with great zeal. I recommend AJ as an attorney, as he will do his utmost to defend his client.

I tried my first case against AJ Richman. Mr. Richman was exceptionally prepared, focused, and genuinely passionate about the law. Has a great courtroom demeanor and very empathetic to the clients he serves.

I worked with A.J. on many cases when he was a prosecutor. He is hard working and knowledgable. I expect he will have these same qualities in private practice. I endorse this lawyer.

I had the opportunity to work with AJ very early in his career. He displayed a level of competence and preparedness that most attorneys take years to achieve. It is without hesitance that I endorse him as a lawyer.

AJ was always a professional while serving as a prosecutor. His knowledge, preparation, and dedication to his clients make him an excellent defense attorney.

I had the pleasure of observing AJ while he was with the Forsyth County Solicitor General's Office. AJ impressed me as bright, hard working, well-prepared, and extremely competent. I have no doubt he will use his experience to the benefit of his clients, and highly recommend his services. On a personal note, I have relied on AJ twice to represent my oldest daughter with respect to her "heavy foots" and AJ has com through each time. From routine traffic tickets to more serious criminal matters, I give AJ and "11" out of 10.

AJ is a very knowledgeable and skilled attorney in the criminal law field. His experience in the courtroom, coupled with his devotion to his clients best interests make him an asset to the legal community. I'd highly recommend AJ.

AJ is an honest, trustworthy and well-respected attorney. He will represent you with everything he has. I highly endorse this lawyer.

A.J. is a great lawyer and a good guy. He knows all about DUI law and he tries cases with the best experts in the country. He's someone you want on your side. I endorse this lawyer.