Effective, experienced defense for those accused of sexual misconduct in any Washington court.

Brad Meryhew is an experienced and highly regarded advocate for those charged with sex offenses or domestic violence offenses in Washington.  During the last five years Brad’s practice has focused primarily on sex offenses and serious assaults. His practice includes both State and Federal cases. His track record of trial success, dismissals and successful negotiations has achieved him a reputation as a leader in Washington for the defense of those charged with sex offenses.

Based in King County, Brad has handled cases all over Washington in recent years, including cases in Bellingham, Everett, Yakima, Tacoma, Olympia, Port Orchard, Longview and Port Angeles. Brad has invaluable experience in advising client’s during the critical investigation of allegations when CPS and the police get involved and will work to insure that you do not make serious mistakes in handling this process. Brad has also become a resource for other attorneys due to his in depth knowledge of the laws, literature and strategies that are central to these cases. (See Actual Case Results on Home page)

Brad’s guiding philosophy is to give each client an experience of justice. To insure that happens he believes it takes extra time to meet with his clients, to work with his client’s family and friends, to interview important potential witnesses himself and to tell the client’s story fully and effectively. He will always work to insure that you are heard, that you understand what is happening, that every potential defense has been explored, and that your representation will be smart, zealous and effective.

Brad has represented people from all walks of life, including many high profile cases. He has represented elementary and high school teachers, coaches, school bus drivers, day care operators,  group home counselors and other lawyers with proven results. His passion for his work, his compassion for his clients, and his common sense  and humor leave a long lasting impression on all who meet him.

Brad Meryhew has been speaking and arguing in public since high school. He was the Washington state high school champion in impromptu speaking, and second in state in extemporaneous speaking. In college he was a very successful debater, taking Western Washington University to the national debate tournament in his sophomore year. While finishing his bachelors degree in International Relations at the University of Utah, Brad was a nationally ranked intercollegiate debater, eventually placing in the top ten debaters in the nation in 1980.

In the early 90s Brad attended law school back in the Puget Sound area at the University of Puget Sound School of Law. Brad began his legal career working as a public defender, where he gained extensive felony trial experience and supervised new attorneys as a member of the agency’s management team. His experience at the public defender’s office included many felony trials, including Murder 1, Assault 1, 2, and 3, Rape 1, 2 and 3, Rape of a Child 1, 2, 3, Child Molestation 1,2, and 3, Domestic Violence assaults, and Robbery 1 and 2, among others.

Prior to his legal career Brad held positions with political organizations and in business, which enables him to bring a great deal of real world and practical experience to his legal practice. After graduate school in Maryland he worked as a communications and government affairs professional for three different advocacy groups in Washington, D.C., with a focus on business related policy, environmental policy and national security policy. After that he worked as a business consultant and as a manager for a large national warehouse outlet before attending law school.

Brad Meryhew is a Seattle native with a passion for gardening and the great outdoors.  Raised in Tukwila, Brad keeps himself busy outside the office on a large garden in the city complete with chickens.  He has traveled extensively all over the world, with recent trips to China, Tibet, Costa Rica and Croatia.

Washington Association for the Treatment of Sexual Abusers-Affiliate Member 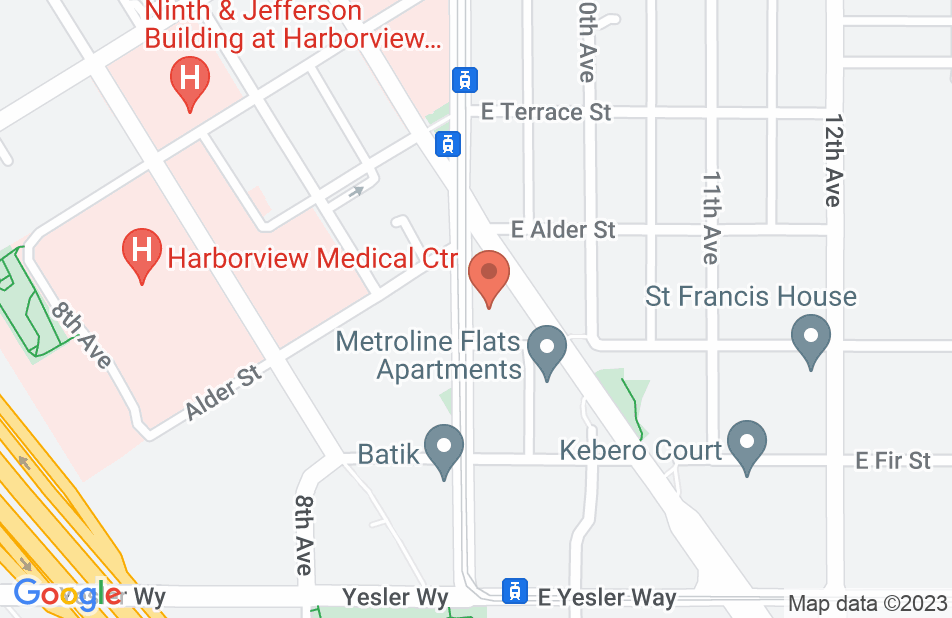 This man saved my life...he is a GOD sent

Just so you all know this man is a GOD sent and has my complete blessing and gratitude. He is one of the most honest and forthright human beings that I have ever met...and he saved my life. Brads demeanor has always been calming and supportive and he has a peace about him the draws everyone to his side. He never lost sight to who I was and to what was wrong in my case. He drew such a simple but detailed view to what the system did wrong in my case…that after only an hour and a half the jurors came to a not guilty verdict. I cannot thank him enough for what he did…he pulled me away from a very dark place that I did not think I could come back from. But yet his caring and gentle soul gave me so much strength that there is a reason GOD place him on this earth and in the profession he now holds.

"Mr. Brad Meryhew is more than an attorney. I felt as though he was a father figure in the toughest time of my life. He encouraged me to stay positive and keep working forward. I took his advice and TRUSTED HIM AND HIS TEAM. Although he may seem busy at times, he knows EXACTLY what to do. He was able to SUCCESSFULLY RESOLVE THE MATTER!! If you were wrongly accused of a crime, please ask him for help.”
See all reviews

I endorse this lawyer. Brad is the go-to lawyer in western Washington for the zealous defense of any alleged sex offense. He has succeeded in defending many many people. He also works to educate and mentor newer attorneys. Brad is personable, trustworthy, and smart. You couldn't ask for more!

Brad is amazing! He is a truly dedicated advocate for juveniles. I had the privedge to hear him speak at a National convention and he taught me more in an hour then I have learned in years of practice. He is insightful, warm, and more importantly very committed to changing the legal system to treat juvenile offenders instead of incarcerating them. I am thoroughly in awe of his dedication.

I endorse Brad. He is a highly skilled attorney that is well respected in the legal community.

I endorse this lawyer. Brad's experience and expertise is an invaluable asset to the criminal bar in King County. Brad is always very knowledgeable and professional when he is dealing with other attorneys and working for his clients.

I endorse this lawyer. I have seen him in action, I have attended several professional conferences in which he has been a featured presenter, and he generously shares his expertise with other lawyers. He has a superior reputation justified by his superior skill.

Brad is one of the leading attorneys in the state and a highly respected voice on Child Abuse and Sex offenses. I heartily endorse him.

I had the pleasure of working for Brad for two years. I found him to be an exceptional trial lawyer who regularly attained exceptional results, a wonderful mentor, and most important, singularly devoted to his clients. Brad lives and breathes his cases because he cannot tolerate the idea of an innocent person, or a person who needs help, being unjustly incarcerated. Protecting the due process rights of those charged with sex offenses is a truly a cause for him. He pours countless hours into representing the defense bar on the Sex Offender Policy Board, and the result is fairer, more just laws that help all of our clients. He is the reason juveniles can now seal their sex convictions. I learned so much about how to help and communicate with my clients from him, and I'm proud to have worked for him and to endorse him.

I am glad to be a fellow defense attorney with Brad Meryhew, because I sure wouldn't want to be prosecutor against him! Brad knows black letter law like few lawyers do and uses it relentlessly in the represenation of his clients. No lawyer, no client, no judge can or will ever say that they saw Brad unprepared in a courtroom. If you want somebody to roll up their sleeves and go to the wall for you, Brad is your man.

The authority on sex-crime defense. A zealous and effective advocate for his clients.

Kim Schnuelle, Divorce and separation Attorney on Mar 12, 2011
Relationship: Worked together on matter

I endorse this lawyer. Brad and I were opposing counsel on (literally) hundreds of cases when he was a supervisiing public defense attorney and I was a prosecutor. I have always found Brad to be the consummate professional: a tireless advocate for his clients in court while also a very skilled negotiator. He was a formidable opponent yet also very collegial. I have referred people to Brad on several occasions with very good results and I can highly endorse him - especially in the areas of criminal defense and high conflict family law matters.

As a prosecutor in the Special Assault Unit of the King County Prosecutor's Office for many years, I was opposing counsel on many sexual assault cases with Brad. Brad enjoys an oustanding reputation that he has earned through a combination of hard work, legal knowledge, and candor. In the cases that I had with Brad he was always very professional and very well prepared. You always knew that when you were heading into trial against Brad that, although he would remain professional and courteous, you were in for a tough fight.

While I was a prosecutor, I opposed Brad on several matters. Even though we were on opposite sides of the cases, I can't say enough good things about Brad. He was professional, competent and pleasant to deal with. At the same time, there was no question about his dedication to his client and effectiveness. If I had a client, a friend or family member accused of a sexual offense, Brad would be one of a handful of attorneys in Washington that I would call.

I endorse this Brad Meryhew's work. I had the opportunity to prosecute several cases against Brad when I was in the King County Prosecutor's Office. Brad does an exceptional job advocating for his clients. He is well respected and recognized as an expert in sexual assault cases.

Rarely will you find an Attorney as knowledgable and professional as Brad. He thorougly prepares for each case and his grasp of the issues is unsurpassed. A true model of integrity for any lawyer to emulate. Brad receives my highest recommendation.