Robert Van Siclen has practiced law in South King County for more than 50 years and is considered by his legal peers to be one of the most experienced trial lawyers in the State of Washington. He concentrates his practice in litigation of complicated issues, including commercial matters of all kinds, major personal injury and wrongful death cases, products liability (especially aircraft and aviation products), and professional malpractice cases. Peer rated in Martindale-Hubbell with an AV rating every year since the 1970s (the first such rating granted any lawyer in the City of Auburn) and selected as a "Super Lawyer" by Law & Politics Magazine, he provides unmatched representation to all of his clients.

Over the past 50 years of representing clients all over the State of Washington, he has recovered settlements or judgments of up to $23 million for his clients. His trial practice has taken him into a number of other states and into Europe. He was the attorney who represented a number of people who were falsely accused of child molestation in Wenatchee, Washington, and in every case obtained defense verdicts and later, through the pursuit of civil litigation for the Wenatchee Defendants, recovered millions of dollars for his clients who had previously been wrongfully incarcerated. He has represented estates of people who died in major airline disaster accidents and has brought and tried to conclusion by either verdict or out of court settlement many general aviation accident cases against general aviation manufacturers.

Bob has been active in his church, the community and the Bar Association. Among others, he is a past president of the Auburn Chamber of Commerce, the Auburn Kiwanis Club and served on the Board of Directors of the Auburn YMCA. He is the past president of the South King County Bar Association. He is admitted to practice law in all courts in the State of Washington including both the Western and Eastern Federal District Courts of this State, the 9th Circuit Court of Appeals and the United States Supreme Court. Bob started the law firm of Van Siclen, Stocks & Firkins which is one of the largest law firms between Seattle and Tacoma with 8 attorneys and a supporting staff of 13 paralegal assistants. 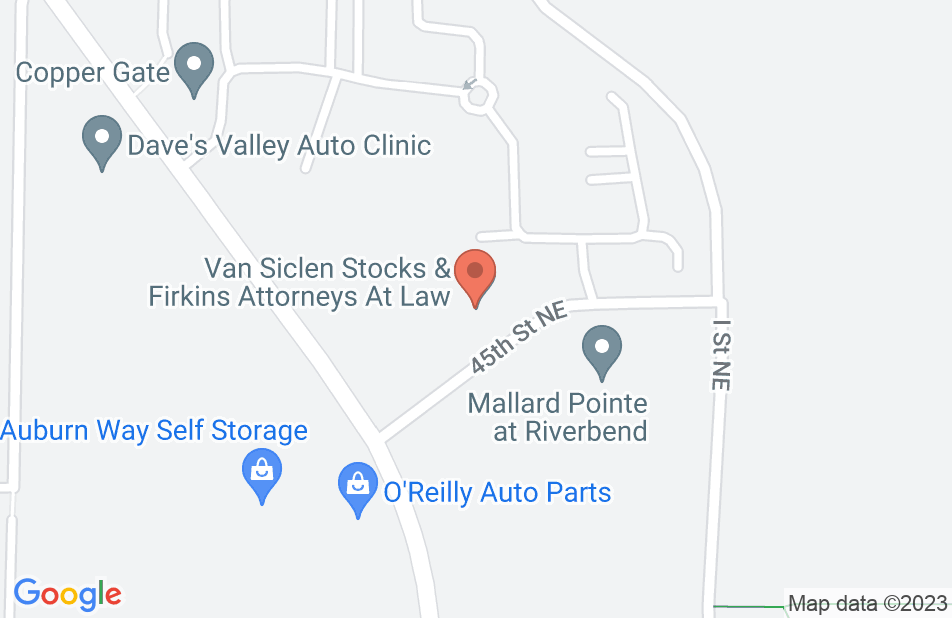 I have always been happy with Mr. Van Siclen's services. He has been extremely responsive to my needs, especially when it came to family estate planning. My husband and I have consulted him regarding a real estate transaction, a traffic violation, and wills/estate planning. II have found his advice very sound and would recommend him without reservation.

Bob was fabulous to work with. Very professional, honest and gets the job done.Fortuneatly, I haven't needed an attorney lately. When I do, Bob will get the call!!

Best firm I've ever worked with

Mr. Van Siclen has handled several issues for me during the last 15 years. One was a wrongful termination case, and another was against an insurance company that refused to pay the claim. There were several other cases and all were settled in my favor. I have the utmost respect for and confidence in Mr. Van Siclen.

Mr. VanSiclen has represented me on two separate occasions. He is compassionate, forthright, and extremely capable. Bob kept me in the loop every step of the way on both cases, and was great about explaining everything that was happening. The outcome of both cases was very positive thanks to Bob's expertise and hard work.

I was honored to have Mr. Van Siclen represent me on a previouse accident case and found him to be professional, reliable and an overall astute attorney. I would recommend him to anyone.

I left our initial meeting feeling it was no more than a social call. My questions emailed were normally left unanswered. I was billed more than $8,000 and all that was accomplished was filing a complaint and serving its summons through a process server. A complete failure of service.

Robert is a class act and easy to work with. I've had the pleasure of working with him on a potentially contentious probate issue between siblings. However, we were able to come to an amicable resolution and our respective clients are moving forward together towards one goal.

I endorse this lawyer. Bob is well known for being an excellent litigator and not afraid to take on tough challenges. I've known Bob for a long time and i highly recommend him.

I endorse this lawyer. NBo one who knows Bob Van Siclen would accuse him of being timid or unwilling to try a case if that was best for his client. He has vast trial experience and success that puts him in a very high level of advocacy few lawyers obtain. But what people may not realize until they work opposing Bob on a case is how he is expertly able to use civility as such an effective tool on behalf of his clients. Recently Bob and I were faced with a very serious and high stakes dispute between family members in a family owned corporation. Thanks is large part to Bob's insight into the legal, economic, and interpersonal issues of the case, as well as his professionalism, we were able to settle this case in a way that really was the best solution for all the parties. Bob is among the very best.

Bob Van Siclen's reputation precedes him and has for years. He is one of the most aggressive advocates for his clients and you want him on your side. I endorse this lawyer's work with the highest endorsement. He has maintained the highest rating AV for years for he and his firm, and he leads a team of 6 lawyers in Auburn, known for taking after his style - aggressive and unmatched representation.