Proudly fighting for good people accused of DUI, criminal charges, and those with personal injuries.

Bryan Donahue got his start fighting for clients in the courtroom, and in trial, early in his legal career--before he even graduated from law school. The experience he gained early on, even winning his very first solo jury trial, is something he will never forget. “I learned to think on my feet, to present cases before both judges and juries. To be able to take the fight to the next level, and feel comfortable doing it, is something so invaluable to me, and my clients.” Bryan continues to build upon his early successes in the courtroom by continuing to win trials, negotiate dismissals, and obtain true justice for his clients.

Bryan is licensed to practice in Oregon and Washington State.

When outside the office Bryan is rarely idle.  On weekends in the winter, you're likely to find him skinning up the snow covered backcountry on his splitboard.  In the summer, you'll catch him paddling the cascade lakes, cycling, or just grabbing a beer with his friends. If you're up early enough, you may even catch him paddling the Deschutes before heading to the office to do what he does best--fight for his clients.  When weather forces him indoors, he enjoys working with his hands—rebuilding vintage cars and motorcycles. As a dedicted and relentless DUII and criminal defender, it is more than fitting that Bryan's current project is a 110 Land Rover, Defender. 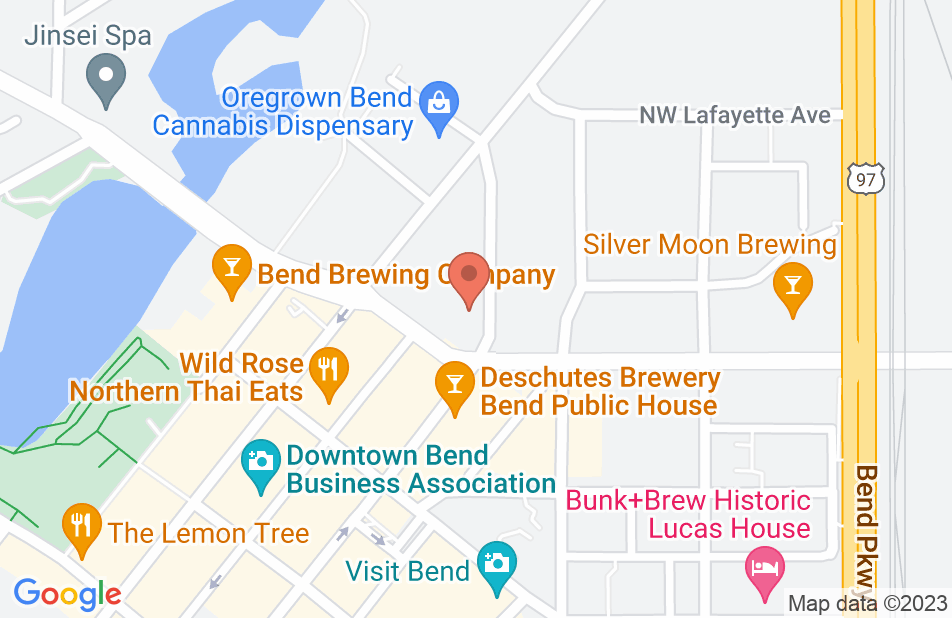 Bryan was very straight forward as well as positive about my case. He stayed in contact with me through the whole process and I am very thankful for all the time he invested into my Case!
This review is from a person who hired this attorney.
Hired attorney

No doubt the best in Deschutes County

Bryan and his team are great people and amazing at what they do. I was facing 17 different charges, and after a lot of great guidance and advice on steps to take, we came to a plea with the DA and went in front of the judge. Bryan had negotiated the charges down to 5, and I was facing 60 days in jail. The judge ended up suspending the jail time and basically giving me one charge. The outcome was better than any of us expected and I am extremely thankful and lucky to have someone like Bryan on my team. Bryan wasn't trying to get me out of trouble or try and work the system, he gave me calculated and sound advice at every new turn, and helped me tremendously. Thank you, especially Bryan and Nicole, for all your time in effort in helping me weather this storm and come out on the other end in the best possible scenario.
This review is from a person who hired this attorney.
Hired attorney

Was facing a DUI in Washington he kept me well informed and won my case. He was a wonderful attorney and always had his information well prepared. Thanks to his diligence I can finally put this behind me. I highly recommend him, his team was always available and very helpful. Thank you Brian Ron Andolina
This review is from a person who hired this attorney.
Hired attorney

Bryan saved my job, my livelihood and my life!!

Only five stars? Can I get more stars, please? Donahue Law deserves way more than just five stars!! I can't thank enough, Bryan and his team, for everything they did for me. Bryan listened to me, sympathized with me and understood me. The greatest of all was that he BELIEVED me, which allowed me to place my full trust in Donahue Law to take care of me and my case. And take care of me they did! My charges were reduced, and then Bryan negotiated for a full dismissal of my case. It was the best possible outcome for my situation. He helped save my job, my livelihood and my way of life! The Donahue Law team was always kind, understanding and very professional. I will be forever grateful for their services. I highly recommend Donahue Law for criminal defense matters. Thank you Bryan!!!!
This review is from a person who hired this attorney.
Hired attorney

We met with Bryan after my son got his 2nd dui, we were very worried and upset, and Bryan was so reassuring and made us feel comfortable. I knew right away that I wanted him to be our attorney. He’s very down to earth and welcoming. So glad we hired him. He made a scary situation not so scary for us.
This review is from a person who hired this attorney.
Hired attorney

There are no words to express my gratitude for the work Bryan did for me. He went above and beyond for me every step of the way, leading with compassion and kindness. His knowledge and professional from the first meeting and throughout the process left me confident that justice would prevail, and it did.
This review is from a person who hired this attorney.
Hired attorney

Bryan Donahue, and his team are outstanding. I would highly recommend them. Bryan Donahue is Knowledgeable , honest ,professional, and compassionate. He worked with my family, and I on a rather messy criminal defense case . We can't thank him enough for getting a better outcome than we could have hoped for . We chose to hire Bryan based on good reviews we read , as well as the confidence , and integrity we witnessed at our consult. He did not disappoint.
This review is from a person who hired this attorney.
Hired attorney

This is your Guy

Brian and the Donahue Law Firm kept me informed throughout the entire process of my case. They were very receptive to my concerns and kept me informed throughout the entire process. As a new resident to Bend, I found myself entangled in a situation that was distorted by law enforcement and caused me to charged with a crime in which false statements were made. Brian and his firm were able to persuade the District Attorney's office to dismiss the charges after only one court appearance. I found that he and his team were knowledgeable and understanding of the unique system here in Deshutes County. I would not hesitate to hire him again. If you need a proactive lawyer that will work hard for you, give him a call
This review is from a person who hired this attorney.
Hired attorney

I hired Bryan to represent me in my DUII case which was quite ridiculous to begin with since I got arrested for backing out no more than 3 feet in a parking section within a parking lot and decided to not drive, pulled up, and exited my vehicle with the intention of getting a cab. However, a Police Officer pulled right up after I got out of my vehicle and all else is history. I only with Bryan could help with removing mugshots online. We shouldn't have to endure public scrutiny and humiliation because of a DUII like this. This is why I have started a petition to ask the U.S. Congress to put forth legislation in stopping sites like Mugshots.com from profiting off of the misfortune of others. Thanks for your help Bryan
This review is from a person who hired this attorney.
Hired attorney

I was arrested for DUI. I decided I should probably hire a lawyer to better my chances. I contacted Bryan and was very pleased with the help and information he provided me. I hired Bryan to assist my with my situation I had gotten myself into, and was very satisfied with the work he did on my case and the outcome. Would I hire Bryan again, yes! But going to make sure I don't need to. Thank you for your hard work and dedication to my case.
This review is from a person who hired this attorney.
Hired attorney
See all reviews

Bryan is a fantastic lawyer. He is personable, highly skilled, and very effective in the courtroom. Bryan truly cares about his clients and will go the extra mile for them. I highly endorse him.

I sent a relative to Bryan because his case was especially hairy and it required the attention of a specialist. Bryan took what seemed like an impossible case and knocked it out of the park. My cousin's case was on the news and seemed indefensible. Bryan actually got him acquitted of the felony charge and was able to separately resolve the misdemeanor with no jail and no probation. I cannot say enough for how aggressive and intelligent this attorney proved himself to be. Beyond that, he is a normal, friendly, approachable person who is very easy to talk to.

I endorse this lawyer. Bryan is a great lawyer and enjoyable to work with. I highly recommend him.

Mr. Donahue is an accomplished and competent trial attorney who does not shy away from litigating when it is in his clients' best interests.

I knew Bryan when he was a criminal defense attorney in Vancouver. He's an excellent attorney and is well-respected by his fellow lawyers.

Mr. Donahue has all the trappings of an excellent trial attorney. He is smart, prepared, and persuasive. If I ever needed an attorney to represent me in court, I would trust Mr. Donahue with my case. Consequently, I would recommend him to anyone in need of a good attorney.

Bryan is a compassionate, capable, and effective attorney who works diligently to obtain the best outcome for his clients. I would recommend Bryan to anyone who has been injured and is in need of a zealous advocate.

I worked on multiple cases as opposing counsel with Bryan, and found him to be an excellent trial attorney. Even in the early stages of his career, he was extremely prepared and brought a confidence to the courtroom that assisted greatly in presenting his cases in the best possible manner.

Bryan is a dedicated and committed defender of those whose lives have been disrupted by injury, and he is exceptionally passionate about using our civil jury trial system in his quest to obtain justice for the people who need it most. But perhaps most important, Bryan is a great guy: kind, funny, generous, and professional. I consider it a high honor to call him a colleague.

Zachary Walker, Employment and labor Attorney on Sep 15, 2012
Relationship: Worked together on matter

Mr. Donahue is a diligent attorney who is experienced and successful in the courtroom. Mr. Donahue handles matters with forethought, walks his clients through difficult situations step-by-step, and has the ability to summarize complex legal issues in a manner that is understandable.

Mr. Donahue is a very intelligent and diligent lawyer. We have worked together on several cases and his knowledge and creativity has always impressed me. He is also an effective trial attorney. I have personally seen him win many jury trials.