In addition to individuals, Seth represents and counsels large and small businesses in areas which include the communications, technology, construction, education, internet and entertainment industries, often acting as their general counsel.

Seth is dedicated to obtaining the best possible solution in a cost-conscious manner.

Seth graduated from San DiegoStateUniversity with a Bachelors of Science Degree in Biology.  He worked as an environmental chemist before attending law school at the University of San Diego School of Law where he graduated in 1995.  He is admitted to practice before all courts in the State of California, the United States District Court for the Southern District of California, the District Court of Colorado and District of Arizona 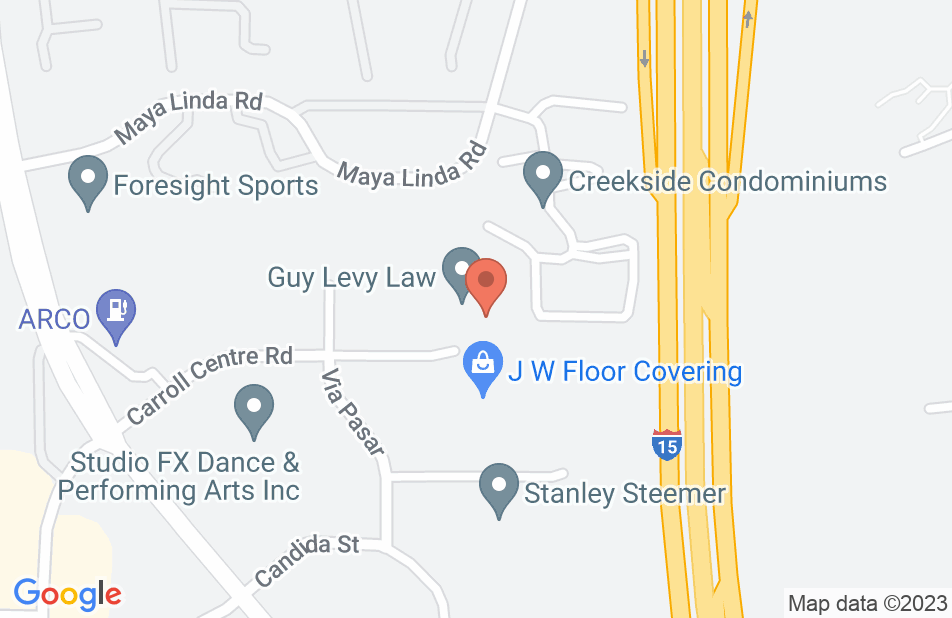 The Law Offices of Seth B. Bobroff

I couldn’t ask for a better person than Seth Bobroff for helping me with legal advice during a tribulation time in my life. He i

I couldn’t ask for a better person than Seth Bobroff for helping me with legal advice during a tribulation time in my life. He is a man of his word, a man of sound integrity, a man of valor that will work diligently to see justice righteously. I am forever grateful for Seth Bobroff.
This review is from a person who hired this attorney.
Hired attorney

I came to Seth Bobroff with a very difficult case. It was an injury from a year ago that had continued to get worse & as the medical bills came in my stress level increased. After being turned down by all the lawyers I had talked to, Mr. Bobroff took the case. He is easy to talk to and extremely compassionate. He and his (excellent) paralegal told me to get better and leave the rest up to him. I hear horror stories all the time about personal injury lawyers and it makes me so grateful that They were on my side. They went above and beyond time and time again. It was a roller coaster ride of emotions but he did what everyone else said was impossible. I am so relieved that this chapter in my life is coming to end. Thank you! Thank You! Oh and the special chocolates at his office are the best:)
This review is from a person who hired this attorney.
Hired attorney

Outstanding Lawyer but an even better person!

From my first meeting with Seth I knew that he was the right lawyer for me. He took my case and went straight to work. He fought on my behalf as a disabled veteran against the plaintiff who was suing me in civil court. I did not have alot of money and Seth was not concerned about the money but more concerned about protecting a disabled veteran's career. He did exactly that. The case was dismissed and we won the case. If you are looking for a great lawyer but an even better person, Seth Bobroff is the lawyer for you. I highly recommend Seth for all of your legal needs give him a call!
This review is from a person who hired this attorney.
Hired attorney

PETER DRUCKER The management Guru of 20th Century once answered the Yale Students questions if the beer can making cranking noise inside a new Cadillac engine THE MOST serious indication of America's society as a whole in danger, by answering: " No! It's when a young attorney say good bye for the weekend fishing trip, the boss ask him to cancel that trip: because we just received a case could potentially digging into a bigger case". This is America's true danger .. In Seth Bobroff's office experiencing his practice for myself; my company and his other activities, I found no any such culture, instead, Seth is down to earth honest; charges reasonably and you feel that you are at ease talking to a friend. and always had his client's interest in mind. When did you experienced such a luxury? He is the attorney to keep.

I endorse this lawyer. Seth's ability to relay the important aspects of a case and cut to the chase was appreciated by all parties involved in the matter, and helped resolve some open issues in an efficient way.

I endorse this lawyer. Seth is an excellent litigator and is a well-respected advocate for his clients. His clients are very fortunate to have him as their lawyer!

I endorse this lawyer. I have learned so much watching this amazing lawyer advocate for his clients.

What separates Seth from the herd is that he truly cares about his clients. He takes a personal approach to each case and uses his experience and insight to obtain the best possible result for his clients. I have known Seth for over ten years and he is the best in his area. I would recommend him to anyone unreservedly.