Based in Conroe, Texas, and serving the greater Houston area.  Patrick began his career working at a large firm representing insurance companies.  Through this work defending large companies, Patrick realized his passion was with representing the injured.  Since 2011, Patrick has dedicated his practice to those that have been injured or harmed by the negligence of others.  He has helped clients achieve justice for both large and small claims.

The types of cases Patrick has handled include catastrophic injury, wrongful death, fire damage claims, trucking accidents and car accidents.  Whether your claim is large or small, Patrick knows having an advocate at your side is the most important thing you need to achieve justice.

Patrick is licensed to practice law in all state courts in Texas, Louisiana, and Oklahoma. He is also licensed in all federal courts in Texas and in the Western District of Oklahoma. Patrick is a graduate of Baylor University School of Law where he served as Editor-in-Chief of the Baylor Law Review. While in law school, Patrick was selected to the Order of Barristers, the Texas Administrative Law Moot Court Team, and was an Octa-Finalist in Baylor’s Moot Court competition. He previously served as an intern to the Honorable Calvin Botley of the United States District Court for the Southern District of Texas, as an intern with the Texas State Bar Rules of Evidence Committee and on the Executive Board of the National Conference of Law Reviews. Before law school, Patrick received a B.A. summa cum laude in Political Science from the University of Houston Honors College. While there, he was awarded multiple academic scholarships and awards.

Patrick was raised in Natchitoches, Louisiana. After high school, he enlisted in the United States Marine Corps as an Intelligence Analyst. In his initial Marine Corps training, Patrick was recognized as an Honor Graduate of the Navy and Marine Corps Intelligence Training Center. During his four-year tour of duty in the Marines, he served overseas in various countries and capacities. For his service, he received a Naval Achievement Medal as well as several commendations.

In 2014, Patrick was named to the National Trial Lawyers Top 40 under 40.  In 2015, Houstonia magazine recognized Patrick as one of Houston’s Top Lawyers.  Patrick maintains a 10.0 rating on AVVO, the highest possible rating a lawyer can attain.  He is a member of the American Legion and has served as a volunteer attorney with Texas Lawyers for Texas Veterans. Patrick and his wife, Jesika, reside in Conroe, Texas.  Patrick also speaks Spanish. 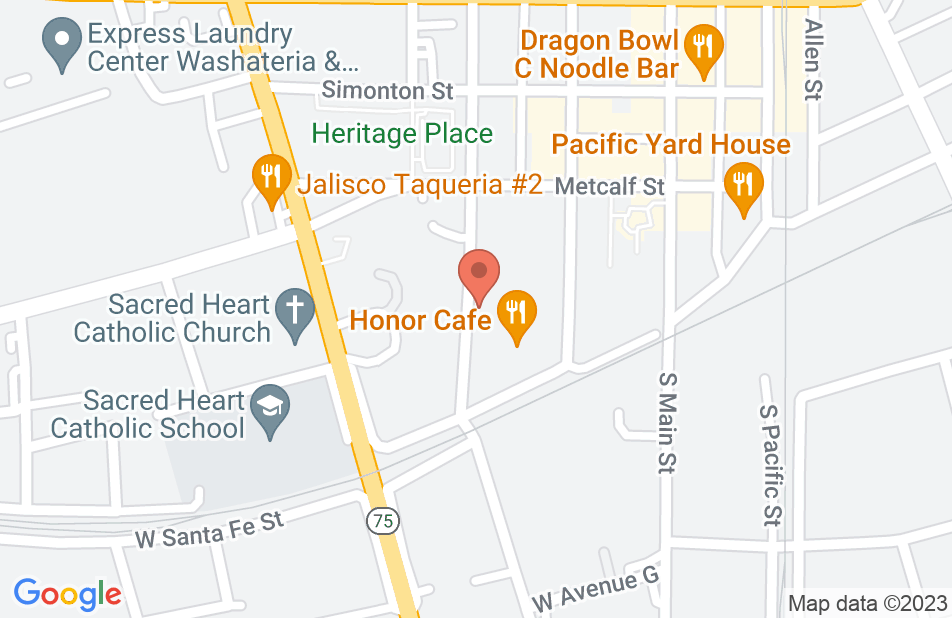 Patrick and his amazing staff truly care about their clients. I wasn't sure who to use for my personal injury case, and went in to talk to them. They made me feel like I was part of their family from the first consultation. They ensured my medical care was priority and protected my interests. They fought extremely hard to ensure I got everything I not only needed, but deserved. If you need an attorney who puts you first, this is the one! Thank you Patrick, Maria and Krystle from the bottom of my heart!
This review is from a person who hired this attorney.
Hired attorney

Patrick is a great attorney who works extremely hard to get you the justice you deserve. He helped me out on my personal injury claim I had. He made the process be less stressful for me. I recommend Scott Law Firm to anybody that is needing a local attorney in Conroe, Texas.
This review is from a person who hired this attorney.
Hired attorney

I’m completely satisfied with the care and help with my Injury from an Auto Accident that was provided by Scott Law Firm In Conroe Tx. The Scott Law Firm from consultation to the final settlement was very Professional, Knowledgeable, Compassionate & Helpful with my case. I definitely recommend the Scott Law Firm to all my Family, Friends & Anyone else.
This review is from a person who hired this attorney.
Hired attorney

I used Mr. Scott as my attorney. He and his staff were always great. I felt comfortable with him and his staff to handle my case. Great communication, which is so important.
This review is from a person who hired this attorney.
Hired attorney

This was the first time I’ve had to deal with anything like this and at first I wasn’t because it was taking a while but it was well worth it because they got more than expected or thought to gain I initially. I would recommend this firm to anyone seeking a paralegal for sure.
This review is from a person who hired this attorney.
Hired attorney

We hired Mr. Scott following an auto accident when I was hit at an intersection. He was able to find proof it was the other person had run the red light and worked hard to get us the best possible out come for our case.
This review is from a person who hired this attorney.
Hired attorney

Patrick Scott was very professional, helpful, and kind. His staff members were all quick to respond. He was able to settle my case after a different law firm gave up on it. I highly recommend him.
This review is from a person who hired this attorney.
Hired attorney

Patrick Scott and his team at Scott Law Firm did an outstanding job handling my case and I highly recommend them. I was involved in an auto accident in which I was rear ended by an underinsured driver at a stop light. Patrick and his team from the first day to the last treated me like family and fought for me every step of the way. Thank you team!
This review is from a person who hired this attorney.
Hired attorney

Scott Law Firm did a great job handling our auto accident case. They were very professional and very responsive to all of our concerns. I highly recommend them for all legal needs.
This review is from a person who hired this attorney.
Hired attorney
See all reviews

I have worked with Patrick on several matters. He is an absolute expert on issues dealing with personal injury. He offers honest, straight-forward advice that has proven time and time again to be extremely beneficial. He is a true asset to the Conroe and Montgomery County community.

Our firm has referred cases to Patrick Scott in the Conroe area and he has done excellent work for our clients.

Our firm has referred cases to Patrick Scott in the Conroe area and he has done excellent work for our clients.

Kirby Hopkins, Litigation Attorney on May 17, 2018
Relationship: Worked together on matter

I endorse this Patrick. He is detail oriented, provides impeccable client service, and has an impressive team. Patrick get his clients very favorable results.

I have worked with Patrick on several matters. He is an absolute expert on issues dealing with personal injury. He offers honest, straight-forward advice that has proven time and time again to be extremely beneficial. He is a true asset to the Conroe and Montgomery County community.

Shortly after Mr. Scott took his talents to Houston, I saw first-hand the impossibly-big shoes left to fill here in Wichita Falls. Each time Mr. Scott's name is mentioned, I discover another a new accomplishment on his resume. He was on the Baylor Law Review, served our nation in the Marines, is bilingual, was President of the county's Bar Association, is an active volunteer in multiple organizations, clients and co-workers really liked him, and the list just continues to grow. Because of his impressive reputation in the legal community and all of these accomplishments I continue to discover, I can confidently endorse this lawyer.

Patrick is an excellent attorney and advocate for his clients. He is beyond driving in achieving a favorable outcome for his clients. I went to Baylor Law School with Patrick and have personally witnessed his zealous advocacy skills. Patrick is a fearless advocate and a true rising start, I would highly recommend him!

Patrick is a very sharp lawyer whose personality has a rare balance of intellect and charm. Anyone would be lucky to have Patrick fighting in their corner.

Patrick is a complete professional who puts the needs and goals of his clients first. He is committed to providing excellent representation to those injured by the actions of others.

Patrick is an excellent personal injury lawyer because, among many other reasons, he has a commanding intellect that allows him to understand issues on a level not normally seen in any profession. I know many injury lawyers in Texas and I would not hesitate to hire Patrick if I were injured.

Patrick's attention to detail and knowledge of the law is second only to his tenacious representation of his clients. His results speak for themselves, as his success in resolving cases (both pre-litigation and in litigation) has been tremendous.

I endorse this lawyer. Extremely competent lawyer and represents clients with dedication and zeal. He has undertaken some really difficult cases with outstanding results.

Patrick Scott is one of the most dedicated and intelligent attorneys I know. He is committed to the people of the Greater Wichita Falls area. A Marine and former editor of the Baylor Law Review, Patrick is a powerful combination of discipline and legal knowledge. Whenever I have a client, friend or family member who is injured in that part of Texas, there is no question who I call.

Patrick Scott is a dedicated, knowledgeable and hardworking personal injury attorney. In each of his cases, he brings insight and intensity from the moment he is hired until he resolves the matter. When a close friend was injured, I called Patrick first. He exceeded my friend’s expectations as well as my own expectations.

Patrick began his legal career at a firm in Fort Worth, and we worked closely together on a number of cases and projects. Patrick is smart, tenacious, hard-working and focused on identifying the best legal arguments to further his clients' cases. Without hesitation, I recommend Patrick to those seeking an ethical and success-driven attorney.

Patrick is an excellent lawyer who has shown a strength in evaluating cases and obtaining the best results for his clients. I trust him enough that I have referred my own family and clients to his office.

Patrick is a very talented attorney with a strong work ethic. He works hard for his clients in order to achieve the best possible outcome.

Patrick is an excellent and incredibly intelligent attorney. During law school, Patrick was known for his keen intellect and was always willing to lend out a hand to a fellow classmate. As an attorney, if I was facing any complex legal issue, I know I can trust on Patrick to provide a prompt and accurate legal response. As a friend or prospective client, you can trust that Patrick will work diligently while providing the compassion and personal attention you need to prevail. I strongly endorse him as an attorney.