Dennis VanDerGinst received his law degree from DePaul University. He is licensed to practice law in Illinois, Iowa and the federal courts and during his career he has represented clients in almost every state in the country.

Among his numerous and notable accolades, awards and achievements, Dennis has been rated “Superb”, with a 10/10 rating from AVVO Lawyer Rating Service. He has also earned the “Client’s Choice Award” from AVVO. He has been selected as one of the “Top One Percent” of attorneys in the nation by the National Association of Distinguished Counsel. He has been named one of the Top Trial Attorneys in the country by the American Trial Lawyers Association and the American Society of Legal Advocates. He has been selected by his peers as a "Leading Lawyer" in the area of personal injury law.  He has also been selected as one of the top 5% of attorneys in the country by the "Best Attorneys Network", which considers the votes of clients, as well as other attorneys. He has earned  induction into Who's Who in American Law for the past many years; and has been awarded the Albert Nelson Marquis Lifetime Achievement Award by Marquis Who's Who. His tremendous success is also illustrated by his membership in the Million Dollar and Multi-Million Dollar Advocates Forum, which is limited to those attorneys who have secured million dollar and mutli-million dollar verdicts and settlements.  He Has earned Best Attorney-Lifetime Charter Member standing from Rue Ratings' Best Attorneys of America.

In addition to carrying a substantial caseload, he is the CEO of the firm. His accomplishments in the field of law are numerous and varied. Outside of the office, he is active in a number of civic organizations. He is a frequent guest speaker at local, state and national seminars and conventions. Mr. VanDerGinst practices primarily in all areas of personal injury litigation, product liability, medical malpractice and mass torts. 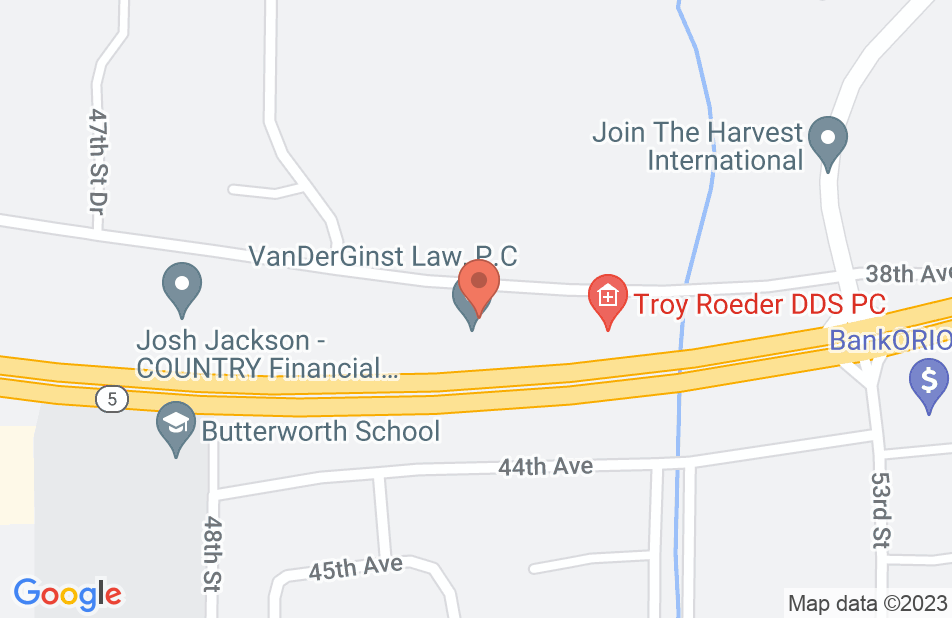 Dennis and his staff were amazing. They were so attentive and understanding. They got me a good amount of money for my injury. I am very happy I went to them.
This review is from a person who hired this attorney.
Hired attorney

Dennis VanDerGinst rocks, plain and simple! My dad was seriously injured several years ago and Dennis would not put up with the insurance company's baloney. He fought until he made it right. When I got hurt in a car accident awhile back I knew exactly where to go. I didn't need to worry about anything other than getting better. Dennis and his staff took care of everything else and had the case settled within a month after I was released from treatment. I am forever grateful!

My friends and family had all recommended Dennis when I got seriously injured in an accident. I nearly lost my life. The insurance company argued over everything...who was at fault, to what degree, what was proper compensation. It was horrible. Dennis took the bull by the horns and "got er done". He was a true master at what he does. He knows so much about not only the law, but medicine and therapy and surgical procedures. I was impressed and I am not easily impressed. I was extremely satisfied with him and his office and most importantly, the results they got!

I have used Dennis twice when I was injured in car accidents. Each time he got me more than I would have anticipated. He is smart, dedicated and respectful. But, he is just a good guy too. He doesn't act like he is better than you just because he may be more educated or well known. He is down to earth, nice and funnier than I ever expected. He is the type of guy you'd just like to hang out with even if you didn't need his expertise as a lawyer. Maybe that is why he is so good. Anyway, all my friends and family that need a lawyer go to Dennis first.

Dennis is the best!

Dennis VanDerGinst and the staff of VanDerGinst law are simply unstoppable and unflappable. I almost lost my arm in an industrial accident. Work comp benefits were limited so Dennis went after the manufacturer of the machinery that caused the accident. They refused to pay anything at first. By the time Dennis and his crew were done they were begging us to settle right on the doorsteps of the courthouse before the trial was about to start. Anyone who has been injured needs to call Dennis and his team.

Dennis and his team went to bat for my family and I when we needed it the most. Anyone who needs legal help for a personal injury cases should call VanDerGinst Law

He urged me to get the care after my accident I didn't think I needed, turns out he was right and the extent of my injuries were far worse than I even realized. He took care of everything, I didn't have to do much besides make a verbal statement over the phone to an insurance company. No out of pocket expenses. Highly recommend him as your personal injury attorney! All the attorneys at Vanderginst Law have taken great care of their clients fur whatever their needs were.

I would highly recommend Dennis VanDerGinst for injury cases

He helped my family and I get all we deserved when my husband was seriously injured. I have referred many friends and family members to him and his firm. They has all been very pleased with the results.

Dennis VanDerGinst was great. His firm took my case after no other lawyer would. He knew what he was doing and got me justice because I was wronged. I highly recommend him!

I work for Dennis at VanDerGinst Law. He's highly respected when it comes to personal injury law. He's even more respected in the community as leader and philanthropist.

I endorse Dennis as a personal injury lawyer and as a leader in the law community. I have the pleasure of working for and with Dennis at VanDerGinst Law. He is highly respected in the community inside and outside the courtroom.

I have known Dennis for over ten years. He is a highly skilled attorney and is very well-respected in the legal community. He has a passion for the practice of law and cares deeply about his clients. I strongly endorse him.