Scott practices primarily in the areas of criminal law and estate planning. Scott's clients often describe him as "a straightforward, no-nonsense advocate." Scott is a husband, father and a native of West Fargo, North Dakota.

Criminal Law
Having handled over a thousand criminal cases in his career and having appeared in numerous counties throughout North Dakota and Minnesota, Scott has seen almost every type of case: DUI, Minor In Possession (MIP), drug possession, disorderly conduct, domestic violence, assault, white collar crime, theft, burglary, tresspass, sex crimes, appeals, and even homicide are some of of the examples of cases that have come across Scott's desk. Growing up on a farm gave Scott the work ethic to know when the extra effort is needed on a case. As a veteran of Operation Iraqi Freedom, Scott has developed a knack for being able to engage in straight talk about what is going on with each case he handles. He is not afraid to have a candid conversation about what is happening in the case with his clients, the prosecutors, judges and juries.

Estate Planning
Scott is still Involved with his family's farming operation. He knows farming is not just a career, it is a way of life that is passed down from one generation to the next. Scott understands the importance of managing his client's estates so this way of life can be protected. 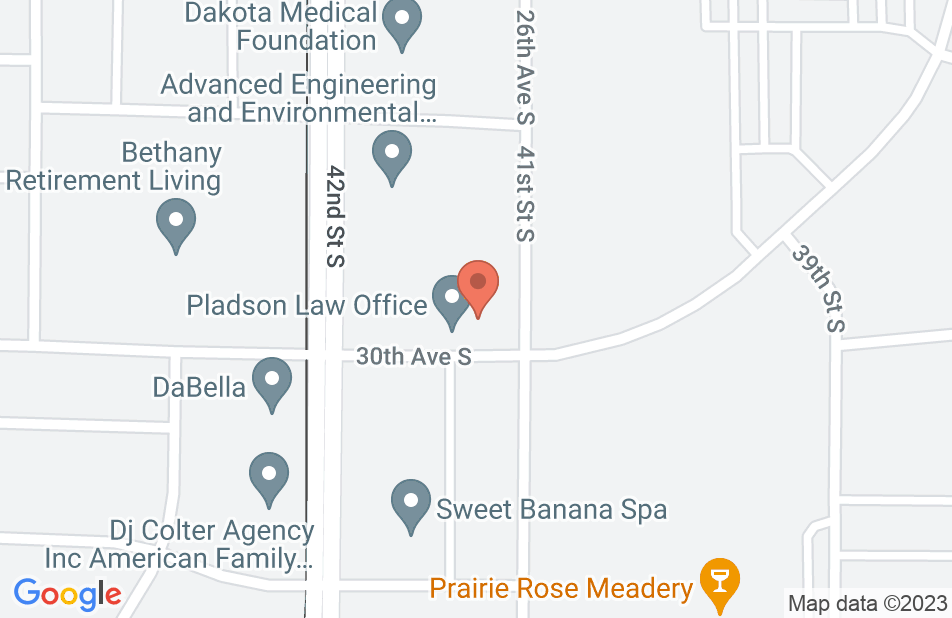 Counselor Brand is a very competent, very professional attorney. After having a free, very thorough initial consultation with him, he immediately got to work on my case, meeting with the prosecutor at my dispositional hearing (which, only two days away, and thanks to his representation, I didn't even have to attend), and that very same day HAD ALL THE CHARGES DISMISSED! I simply couldn't recommend Scott any more highly. A very thoughtful, intelligent who GETS RESULTS ... fast. If you're case is in North Dakota or Minnesota, you could not be better served by anyone else than Mr. Brand.
This review is from a person who hired this attorney.
Hired attorney

The best lawyer I've ever used

Scott Brand is an honest lawyer who is worth many times more than his retainer. I was not at first not satisfied by the rural lawyers I came across in McKenzie county or that came up by sponsored links on Google. I found Scott by going to the prosecutor's office in another town, Dickinson, and asking for a private criminal lawyer that they would reccomend. At first I was shocked that the reccomendation to the lawyer was all the way in Fargo. I called him and he agreed to meet with me when I was passing through. At first I was a bit uneasy that the office was 6 hours away from the county in which I was facing charges, but this is normal for North Dakota. I am so glad that I went to Fargo instead of responding to the lawyers out there in that corner of North Dakota. My brother and I went to Scott's office one time and he was courteous and more than professional. Because I live in France, all of the contact was done over phone, mail, or e-mail from this point onwards. A week after this meeting, Scott gained access to the bodycam footage of the officer and it was clear that this was a civil rights violation. The prosecutor still rejected this argument, despite the fact that everything was on camera. Scott drafted some sort of long, complex legal document that was based in North Dakota state case history to fight my case. When he actually appeared in court to defend this document, the prosecutor and police officer were still tenacious. The judge threw out the case, however, and issued a written ruling entirely in agreement with Scott. I got back the entirety of the bail money that I paid to the county and more importantly I have my life back. If I had had to go on probation in North Dakota, who knows what type of problems this would have caused me later on. His retainer is totally worth several times over what he charged. He made it so I never had to appear in court in any hearing or as a witness, so that I did not have to return from France, which would have easily cost several thousand dollars per appearance. For a lawyer, Scott is more than honest. He doesn't overpromise. I felt reassured throughout the whole course of several months. I really don't envision that other lawyers might have been able or even dedicated such an amount of hard work to beat the charges. I don't have a great opinion of lawyers in general and I'm not sure that the other lawyers I had consulted would have not just taken my money and then advised me to take a plea deal to finish everything as fast as possible.
This review is from a person who hired this attorney.
Hired attorney

He did a wonderful job of explaining things. He was very thorough, listened to our side, and went to bat for us. So glad we went with Scott!
This review is from a person who hired this attorney.
Hired attorney

My son & I spend 1-2 weeks in Cali w/ my daughter every summer. My son-in-law was deployed in Feb. 1 week later my older son unexpectantly passed away. We planned on spending time w/ a family member who is gravely ill. After purchasing the tickets my younger sons father decided to take me to court to deny my travel to Cali. Scott took my case last minute. He did a thorough job preparing himself for court, called & followed up with the contacts & witnesses, returned my calls & mail's immediately & put my entire family at ease. an aunt who is
This review is from a person who hired this attorney.
Hired attorney

I was denied access into Canada because the clerk of court entered my case as a class B misdemeanor. It supposed entered as an infraction. Scott went to court for me, and got everything cleared up in a very timely manor. All I had to do was sign a few sheets of paper. It was very smooth and easy.
This review is from a person who hired this attorney.
Hired attorney

I hired Scott twice now and he was great. He broke things down for me so could understand everything. He was very professional and I would recommend him to anyone.
This review is from a person who hired this attorney.
Hired attorney

I have consulted with Scott on numerous criminal matters. He is a knowledgeable attorney and a zealous advocate for his clients. I endorse Scott Brand.

Scott is very knowledgeable about criminal matters. He explains things in ways that clients get and helps them navigate a really tough situation. He cares about his cases and fights hard for his clients. I endorse this lawyer.

Ross Nilson, Litigation Attorney on May 17, 2017
Relationship: Worked together on matter

Scott is a bright lawyer and has achieved really good results for his criminal defense clients. He isn't afraid of the court room and speaks in a language that his clients understand.

Scott is a knowledgable attorney and a zealous advocate for his clients. I endorse this lawyer.

Scott is a zealous advocate for his clients, and will do whatever is necessary to represent his clients to the absolute best of his abilities. His work ethic is top-notch, which is evident in his representation of his clients.

I personally worked with Scott at a firm in law school and quickly recognized his determination and zealous advocacy. Scott is a formidable opponent to any attorney and very knowledgeable of the law. I endorse this lawyer.

Scott is a great lawyer with a broad understanding of the complexities of criminal law both in State and Federal Courts. He truly has a passion for the protecting the rights of his clients and is well respected by his peers.

Scott is a zealous advocate for his clients. His approach to meeting clients' needs in any given situation is aggressive and focused on problem solving. Scott's strength's include constitutional rights application and case law research to defend clients' best interests. I endorse Attorney Scott Brand.