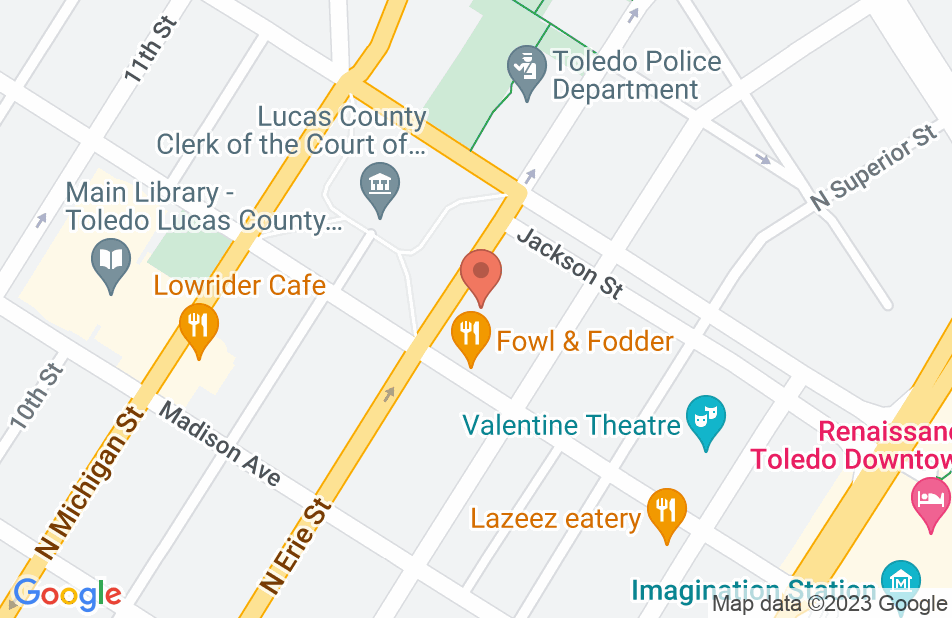 I was an out of Towner at a concert in Toledo. Got into a little bit of trouble with the police couldn't find an attorney to represent me because of lack of time before my hearing. Luckily got a hold of Mr. Groth. Not only did he get all my charges from the concert dismissed, but he offered to help me get my record sealed. If you need a true 5 star attorney then Stevin Groth is your man! Thanks Again Stevin!
This review is from a person who hired this attorney.
Hired attorney

Sitting in court, waiting for my case to be heard. I witness multiple lawyers, and to be unbiased, Stevin J.G was by far the best. Well spoken, smooth talking, and not to mention as calm as a summers breeze. He really cares about his clients and wishes, as well as strives, for the best for them. I greatly appreciate him taking my case. Fantastic man!
This review is from a person who hired this attorney.
Hired attorney

You don't need a lawyer till you NEED one. In the search for legal representation, I had met with another lawyer and talked to many others about a personal issue I never thought I would encounter. Stevin was the last lawyer I reached out to because I knew he was who I needed to deal with my case. I called his office, and he returned my call while he was out of state on vacation. He took the time right then to talk through my incident with me. He was professional and understanding. Stevin was was honest and forthright about the possibilities, but sensitive as well. I had assumed that he would pass our case off to a subordinate, but he didn't. He handled the whole case himself, start to finish. Stevin has a great reputation in the area and with the prosecutors office, which is important in gaining credibility since he becomes your representation when dealing with the court system. I would absolutely hire Stevin again and give him my highest recommendation.
This review is from a person who hired this attorney.
Hired attorney

The best to do it, he resolved my issues in a timely manor and helped us in all ways possible. Highly recommended!!!
This review is from a person who hired this attorney.
Hired attorney

Stevin is by far the best attorney we have ever had!! He is very professional and from the moment we had our consultation we were very relaxed knowing we were in good hands and hired him immediately. My daughter was facing several charges. She didn’t have a prior record but was now facing a couple felonies plus some misdemeanors. Stevin was able to get everything dismissed and she only has to pay a couple ticket fines and court cost. There is not a scale that goes high enough to rate Stevin. If you need an attorney you should hire Stevin without hesitation. He is very reasonably priced and worked with us on payments. We are sooo grateful for him and we will keep his number forever, just in case...
This review is from a person who hired this attorney.
Hired attorney

Gave excellent advice. I was freaking out ready to turn myself in for a scam. I will say no more "to anyone!" thank you.
This review is from a potential client who consulted with this attorney.
Consulted attorney

In a Bad Place at a Bad Time

First time Visitor to Lucas County to do a craigslist exchange. Accidentally parked in a suspected local heroine trafficking spot and got pulled over by undercover police. I had been charged with mishandling a firearm in a motor vehicle. I did not have my CCW but I feared for safety as I realized that the meeting spot chosen was not ideal. Stevin was very professional and guided us through the entire process during our free consult. After hiring, everything went exactly as planned in the consult! For being a first time offender with no previous convictions or arrests, I was able to have my charge dismissed with a simple online class for basic safety. I am very pleased with his service. Very professional and fast turnaround! Anytime we had a question he was just a text or call away! Definitely recommend!!
This review is from a person who hired this attorney.
Hired attorney

Have not paid him a dime and have advised me while on vacation,I wish we all have access to law professionals like Stevin.I salute him. Abid Butt New York
This review is from a potential client who consulted with this attorney.
Consulted attorney

We hired Atty Groth to represent our daughter-in-law in a situation where a hit and run charge was filed. Atty Groth proved in court that the whole situation had basically been blown out of proportion. The charge was drastically reduced thanks in part to Atty Groth's persistance and professionalism. He is very much a credit to his profession.
This review is from a person who hired this attorney.
Hired attorney

The gratefulness that I and my husband have for this attorney and his firm is too great to put into words. Our son committed an unspeakable crime in which could have ended him in jail until 21 or longer if he was charged as an adult. Without going into full detail of the charges, all I can say is that it was truly a devastating and traumatic situation that effected our whole family, tremendously. First, Groth thoroughly, yet kindly, explained the charges and worst case scenarios in these types of situations, which was, extremely, hard to hear, as mother. However, he took the case with no hesitation explaining, very confidently, that he would make sure worst case scenario did not happen. Less than 24 hours of hiring him, he already talked to prosecutor, charges were dropped to the lowest felony possibly as a minor (not bonded over as an adult), a court date within a week or so, no jail time, and probation upon completion of program. A case that could have drag on for months was done in just a few weeks. Not taking anything away from the victim or family by any means, I just need to say that during the whole case our family felt very important to Groth and somewhat special, if that is proper to say. This is because of how much care and professionalism was given throughout the case. His words, demeanor, and attitude was confident and soothing from the first moment he said he would take the case, in the court room, and after. A family member who told us to hire him said, "He is a wizard in the courtroom." She was right. There are some attorneys who have a reputation of being "a bulldog" in court room and winning cases. Gross appears to be so well respected and very much liked by everyone, including prosecutor, probation officers, staff, and more importantly, the judge, he didn't even have to go there. However, through talking to other people, including himself, if he had to go there, he could and would for his client. Groth, is a very knowledgeable and skilled at what he does, his intelligence, persuasive, and caring as an attorney is instantly seen. I know that it was God who put him in our path to help my son (a very loving and good kid) who made a very bad decision, get a second chance at having a healthy life without being stuck in the system. Thank you so much with hugs and tears.
This review is from a person who hired this attorney.
Hired attorney
See all reviews

Stevin Groth is an accomplished criminal defense lawyer as well as plaintiff civil litigation specialist. I hold him in high regard for his legal ability and unwaivering ethics. As does the rest of the local legal community.

Ray Richards, Criminal defense Attorney on May 21, 2014
Relationship: Worked together on matter

I endorse this lawyer. I have had the pleasure of working with Stevin on a complex high profile Federal criminal defense matter for over 5 years. He is a tried, true and tested defense lawyer, who is a man of his word and is well respected.

Stevin delivers professional services for his clients at the highest caliber. He is a confident lawyer willing to do whatever it takes to help his clients get the justice they deserve. He not only works hard to help others, but is a respected member of several community related organizations which include the National Association of Criminal Defense. I endorse this lawyer.

I endorse this lawyer. Stevin is one of the best speaking attorney in the County.

Mr. Groth is well known for his excellent reputation in NW Ohio. I highly recommend him.

I endorse this lawyer. I have worked with Stevin for many years. He is excellent in the areas of personal injury and criminal defense. He has a vast knowledge of the legal system and is very personable with juries. He maintains a sense of humor in dealing with opposing counsel and adjusters. As a human being, he is a mensch and one of the finest people I know.

When I was looking to leave prosecution and go back into private practice, Stevin was the first person I called. I have known him for many years and respect his skills as a trial attorney enough to put my future with the firm. Stevin has the skills and ethics to get you the best result possible.

Stevin Groth is an accomplished criminal defense lawyer as well as plaintiff civil litigation specialist. I hold him in high regard for his legal ability and unwaivering ethics. As does the rest of the local legal community.

Stevin Groth is an active and successful lawyer whose law practice is well-known and well-regarded in the Northwest Ohio area. I have personally worked with Stevin on several injury cases and know him to be extremely effective. Stevin and his team are a familiar presence in virtually every courtroom in the area.

I have known Stevin for more than 10 years having worked as co-counsel with him on several matters. Stevin's work ethic and attention to detail sets him apart from many other lawyers. When you meet with Stevin, it's like meeting a friend. He takes your matter as serious as you do and will treat you with the dignity and respect you deserve. I would highly recommend Stevin.

Mr. Groth and I have been acquainted for years. He is well know and respected in the Ohio legal community as a tough advocate for his client. I endorse Steven Groth.

I endorse Stevin. He is a highly skilled attorney that is well respected in the legal community.

Ray Richards, Criminal defense Attorney on May 21, 2014
Relationship: Worked together on matter

I endorse this lawyer. I have had the pleasure of working with Stevin on a complex high profile Federal criminal defense matter for over 5 years. He is a tried, true and tested defense lawyer, who is a man of his word and is well respected.

Stevin Groth is a friendly competitor in my community. He is very knowledgeable in his area of practice, a strong advocate for his clients, and someone who genuinely cares about his community and his clients. I highly recommend him and his firm.