Described by clients as "exceptional" and a "true lawyers lawyer", put Alan Lescht in your corner.

Alan Lescht has been successfully litigating employment discrimination, civil rights, and commercial litigation cases for more than 25 years. He is a founding partner of Alan Lescht & Associates, PC, where he oversees the firm's employment litigation and counseling practices.

Jeffery Smith v. Dep't of the Treasury , (EEOC Docket No.l00-2005-00704X): We obtained decision finding that the Agency unlawfully retaliated against an employee.

Janyce Wiggins v. Dept of Veterans Affairs , (EEOC CASE NO. 100-AO-7779X): Alan Lescht obtained a decision finding that the Agency unlawfully retaliated against an employee in a non-selection case.

Healthcare Strategies, Inc. v. The WellNet Healthcare Plan, Inc . Case No. 13-C-07-70195 (Howard County, Maryland, 2007): Alan Lescht obtained a decision defeating a motion for preliminary injunction following a hearing on the merits in a case where the plaintiff alleged that the defendant misappropriated trade secrets and customers.

Faraci v. CACI , 464 F.Supp.2d 527 (E.D. VA 2006) Alan Lescht obtained a verdict following arbitration on a claim of sexual harassment and retaliation on behalf of an employee of a government contractor who was stationed overseas. The arbitration award was upheld in federal court.

Figueroa v. Savanar , 2002 WL 83667 (S.D.N.Y. 2002): Alan Lescht obtained a $200,000 verdict where he represented former female employees of a Bonanza Steakhouse who alleged that the owner/manager sexually harassed them. The jury awarded each plaintiff 25,000 in compensatory damages and 25,000 in punitive damages following a two and one half day trial.

Chadwick v. D.C . , 56 F.Supp.2d 69 (D.D.C. 1999): Alan Lescht obtained a $400,000 verdict in case where he represented a former employee of the District of Columbia's Oak Hill Youth center who alleged that she was sexually harassed by her former supervisor. The jury awarded his client $400,000 in compensatory damages and the Court later added $63,981 in lost wages to the award following a five day trial.

Grullon v. South Bronx Overall Economic Development Corp ., 712 N.Y. Co. 2000): Alan Lescht obtained a $125,804.89 verdict in case where he represented a former case manager of a work training center who alleged that his former employer terminated his employment because he was a recovering alcoholic. The jury awarded him 25,000 in compensatory damages, 50,804.89 in lost wages and 50,000 in punitive damages, following a three day trial.

Yousif v. Safeway , 97-CV-200 (D.Md. 1999): Alan Lescht obtained a $422,500 verdict in a case where he represented a former night stocker who alleged he was fired because of his national origin and other civil rights violations. The jury awarded him $22,500 in compensatory damages and $400,000 in punitive damages following a five day trial.

Juliette Johnson v. Reliable Mail Service, Inc. , Case No. 99 Civ. 5877 (McKenna, J., 2002): Alan Lescht obtained a $30,000 jury verdict where he represented a Black employee who had worked for the defendant for about one week and earned about $300 before she was fired. The Judge awarded her attorney's fees as well.

Linwood Jackson v. HABC , Civ. No. 03-86 (BG)(JKB), (D. Md., 2004): we obtained a jury verdict finding unlawful employment discrimination retaliation on behalf of a painter who alleged that he was fired because he complained about what he believed to be unlawful discrimination at work.

Taylor v. ARE, Inc. , Case No. 01-7204 (Blackburne-Rigsby, J., 2005): Alan Lescht obtained a jury verdict finding unlawful employment discrimination retaliation in violation of the DC Human Rights Act on behalf of three former employees of a restaurant who alleged that they were fired because the opposed and complained about discrimination at work.

Sandra Brown v. Noyes Air Conditioning Contractors, Inc ., Case No. 279648 (Circuit Court, Montgomery County, Md., 2007): We obtained a jury verdict finding that the defendant violated the public policy of the State of Maryland by terminating her employment because she filed a claim for worker compensation benefits. 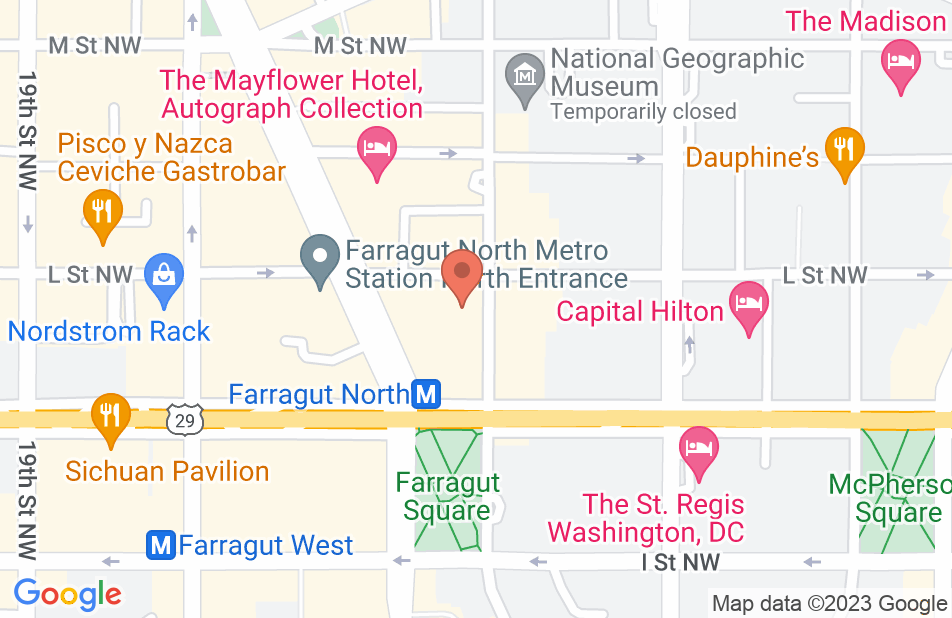 Excellent Counsel Through a Difficult Experience

I cannot imagine a better individual representing me than Alan Lescht. During a long, and at times frustrating, process Alan provided excellent guidance, and answered every question I had with a clear and helpful answer. Whenever I called or emailed Alan got back to me quickly, and kept me informed of all dealings with the opposing side. In all of my dealings with the office everyone was friendly, helpful and supportive. In the end my complaint was resolved very satisfactorily and a level of closure was achieved that will help me move on. I am very satisfied with choice in lawyer I made, and I would recommend Alan to anyone facing similar issues.

I contacted Lescht & Associates in March 2010, when I was told by my employer that he was taking away a multimillion dollar client. that I brought to the company. I am a commission only sales person and after working to secure this client for months without being paid, I asked for a committment in writing from my employer. After receiving the committment and several orders from this client the company terminated me. The first thing Mr. Lescht did was send a letter to the company.stating I had retained his services. He did this the same week I met him. I was impressed by how fast Mr. Lescht responded to my case. Mr. Lescht filed suit in PG County and constantly kept me informed of the status of the case. A court date was set and Mr. Lescht worked with me so I would be prepared to testify. Bottom line Mr Lescht WON the case and I will receive all the commissions due me. Mr. Lescht is an excellent Trial Lawyer, He is calm, cool, and collected. He is very methodical and he stays on point. After the trial, several people commented on how professional my attorney was and how he was able to make his point with very few words.

Alan has been my "go to" attorney

Alan has helped me with several issues over the years. He is level headed patient and very supportive. This latest representation Alan came through with a phenomenal result and as usual I am very pleased. ( I am prohibited from saying anything more which is frustrating) My advice - if you are on the fence about an issue go see Alan for a consultation. Just tell him what you are experiencing. Alan has over 30 years of experience and as a result he is adept at applying the law to your circumstances. I strongly recommend
This review is from a person who hired this attorney.
Hired attorney

My sister referred me to Mr. Lescht when I had a labor issue relating to my work. Mr. Lescht answered my questions immediately, was extremely knowledgeable , and very helpful. I highly recommend him.
This review is from a potential client who consulted with this attorney.
Consulted attorney

Upon having my security clearance suspended, I immediately contacted Alan Lescht and Associates. After our initial consultation, where I had the opportunity to explained the circumstances surrounding my situation, and received feedback and counsel from Mr. lescht, I was convinced that I had chosen the right firm to represent me. The Firm was very supportive throughout the process, and the specific attorney assigned to my case [Susan Kruger] was very thorough, clear and concise in outlining how we would approach resolving my issue. She communicated with me throughout the process of preparing my rebuttal to the Statement of Reasons (SOR), and insured the rebuttal was clear, and concisely addressed every point in the SOR. She also insured my rebuttal was submitted to my host agency point of contact in a timely manner. After 10 days, my Security Clearance and facility access was restored, and I was able to return to work. I would strongly recommend Alan Lescht and Associates to anyone who is in need of a quality law firm to handle their security clearance issues; they are truly the best in my book. Paul A Very Satisfied Customer,
This review is from a person who hired this attorney.
Hired attorney

In addition to knowing the law and being an effective attorney, Mr. Lescht is the kindest person! He treated me with compassion, understood how much I was hurting due to the hostile work environment my manager had created, and took action appropriate action on my behalf. I would recommend Mr. Lescht without hesitation.
This review is from a person who hired this attorney.
Hired attorney

I dealt with Alan and Jack for an extended period in 2017 involving a somewhat complex federal employment situation. I could not have been more pleased with their professionalism and expert counsel. They were honest, direct, and responsive, and I could not have asked for more. Should need arise again for such services, I would not call anyone else.
This review is from a person who hired this attorney.
Hired attorney

I had a consultation with Mr. Lescht and had been stressed out from job related issues. I sent him a statement of my complaint before the consultation. This man is direct and honest and I love it!!! I would rather have someone who tells me the truth and some alternative solutions for my issue than one who tells me what they think I want to hear. Thank You Mr. Lescht.
This review is from a potential client who consulted with this attorney.
Consulted attorney

I worked with Victoria Harrison for my disability retirement case, and she was wonderful! I would highly recommend her to anyone. She was very professional, and very well versed in the matter. She was able to answer all of my questions, and she was very patient with my numerous questions! I was approved for disability retirement thanks to Ms. Harrison's hard work. I highly recommend this law firm
This review is from a person who hired this attorney.
Hired attorney
See all reviews

I strongly endorse Alan Lescht. He is truly one of the most knowledgeable and accomplished employment attorneys in the Washington, D.C. Metropolitan area. His clients are extremely fortunate.

Samuel Dion, Employment and labor Attorney on Jan 4, 2013
Relationship: Worked together on matter

I endorse this lawyer. I have known Alan Lescht for many years. He is a top attorney in the areas of employment discrimination and employment law. I can vouch that he is an excellent choice for any person who has a potential legal matter involving employment.

I endorse this lawyer. I have known Alan Lescht well as an attorney for over 20 years. Attorney Lescht and I were both associated with a law firm with offices in New York and the District of Columbia for several years. Thereafter, I have occasionally acted as co-counsel with attorney Lescht. Based upon my personal and professional knowledge of Mr. Lescht I state that he is a highly skilled lawyer of the highest integrity.