Matt McClenahen grew up in Mifflin County, PA, and graduated from Penn State University in 1994, and the Dickinson School of Law in 1997.  McClenahen learned the art of criminal defense while serving as a trial attorney at the busy York County Public Defenders Office, where he quickly devleoped a reputation as a formidable presence in the courtroom.  McClenahen returned to Happey Valley in 2006 and founded McClenahen Law Firm.  McClenahen concentrtaes his practice almost exclusively in the area of criminal defense. Most of McClenahen's clients are college students, and he fully understands the collateral consequnces, which a criminal conviction may entail for a student. 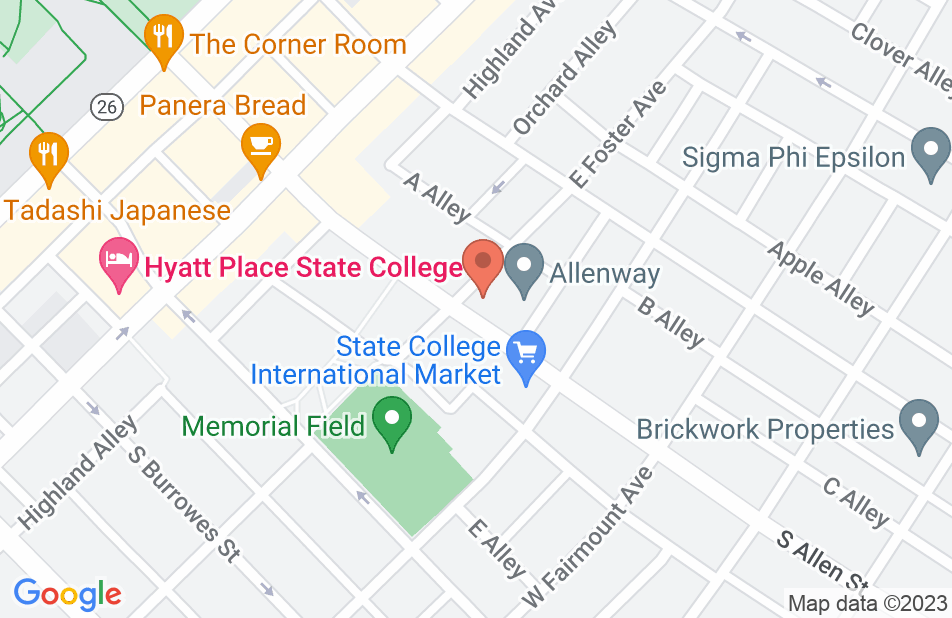 After coming up to Penn State as an alumni, managed to get into some trouble. Left messages for several attorneys on Monday morning. Matt was the only one to return my call, so I hired him. It took a while to get through ARD, and expungement - but every step of the way he was available to take my calls and return emails promptly, and even more important with correct information. He seemed to have very good relationship with prosecutors, probation department, judges, etc. - which was beneficial for me as I needed some help from them to get everything wrapped up by a specific date. Best possible resolution to my situation.
This review is from a person who hired this attorney.
Hired attorney

Imagine my horror to find a charge from 2006 on my record that I was promised would not become public. Well, that was before the days of the internet and all of the sudden, there is was. My employment could have been terminated if that charge wasn't expunged. He did it quickly for a very fair price and even had to work outside of his county. Highly recommend.
This review is from a person who hired this attorney.
Hired attorney

I was referred to Matt by a friend after being charged with involuntary theft over a bike purchase that I had made from a street vendor in the area. Turns out the bike was stolen and I didn't have a clue after the initial 3 months of riding all over state college with it. They were gunning for me but Matt after a quick chat with the Judge got my misdemeanors taken down to ARD & SAVED MY LIFE! I was able to get everything expunged and now have a clean record. His legal advice is top notch! Not only is he caring about his clients needs but he also understands the legal system in PA and has built many close personal relationships with the officials in the area. If you want the best of the best I HIGHLY recommend McClenahen Law Firm.
This review is from a person who hired this attorney.
Hired attorney

That was my first experience dealing with criminal charges; Matt gave me a free, detailed consultation about the necessary steps and consequences. It was very comfortable speaking with him as he didn't give me a hard time for having that kind of experience. He is very professional, experienced, knowledgeable and responsive to any questions I had via email or calls. I was extremely anxious at that time cuz I thought it would affect my future career opportunities, but now I have successfully completed the ARD program, DUI charges are dismissed and I just landed my dream job. Matt was extremely helpful in all the steps throughout the process.
This review is from a person who hired this attorney.
Hired attorney

Best of the best, true professional

I was a Penn State student from out of state and I was facing jail time with felony drug charges. Matt helped get my charges down to misdemeanors. I had an on going case that occurred in my final year at Penn State and I felt hopeless until I consulted Matt. Mr. McClenahen made himself reachable at any time and also helped me avoid traveling far distances if it was not necessary. He is a very diligent and knowledgeable professional who genuinely cares about his clients. I highly recommend Matt to anyone.
This review is from a person who hired this attorney.
Hired attorney

Serious charges with no knowledge of the legal system. Matt explained the process and helped me make sure I did not have to keep coming back and forth to do small procedures. Ended up with misdemeanors
This review is from a person who hired this attorney.
Hired attorney

I was accused of harassment and this was my first encounter with the law. I had no knowledge of the court system or what I was supposed to do in the situation. Matt McClenahen informed me of the entire process and how the case would be handled. I was very distraught because I would be finishing school and looking to start my career. Matt helped me feel better about the entire predicament. At the trial, Matt was very effective in his actions. His experience and knowledge of the law was far superior to the arresting officer. He went beyond all of my expectations and I was found not guilty. I was extremely satisfied with his professionalism, knowledge and abilities in the courtroom. I highly recommend him to anyone.

Our son was charged with an underage drinking violation. I was very distraught because our son has a CDL that he could not lose. He is enrolled in a community college program where it is a requirement that he have his CDL. I called Mr. McClenahen's office on a Sunday thinking that I would have to leave a message for him. To my surprise, he actually answered the phone and gave me advice. The same day, the day after the incident took place, the officer from BLCE contacted me and told me that I had a son that I should be proud of, that he was very respectful of the officer and that he would agree to change the charge to a Disorderly Conduct for him and work with him. 1 1/2 days before my son was scheduled to go before the district magistrate, Mr. McClenahen contacted me to inform me that the BLCE officer had contacted him and told him that "the policy changed" and he was unable to change the charges. Basically, we had two options, my son could plead guilty and lose his license for a minimum of 90 days (nobody had information on how long his CDL would be supsended if this happened) or he could go to trial. We decided to go to trial before the district magistrate. The BLCE officer was unbending and would not agree to change the charges even though he knew how detrimental it would be to my son's career. During the trial, the BLCE officer gave his testimony. The district magistrate asked Mr. McClenahen if he had anything to which he replied that he didn't. I was so angry at this point because it seemed to me that he wasn't trying to plead my son's case. The BLCE officer gave his closing remarks with the suggestion of the Youth Offender's Program (which would have imposed a minimum 90 day license suspension). When the district magistrate asked Mr. McClenahen for his closing remarks, he requested that my son be found not guilty since the officer had not stated HOW he came to find out that my son was, in fact under the age of 21. The officer tried to explain himself but Mr. McClenahen interrupted and told him he had already given his testimony and closed. The district magistrate had to find my son "Not Guilty" -which in fact came with no fines or costs and no license suspension! Thank goodness Mr. McClenahen was aware of the fact that BLCE had to prove how they knew my son was underage. This is the only thing that saved his career because, without his CDL, he would have been removed from the college program. Thank you, thank you, thank you Mr. McClenahen for everything you did. Our son has certainly learned his lesson and now knows how close he came to losing a career that he LOVES. In closing I'd like to just point out that many people mistakenly believe that a charge of Underage Drinking "is no big deal" and feel that they don't need attorney representation. Too many people do not consult with a defense attorney and instead take legal advice from the officer or the court staff. Such people may intend to provide good advice, but they often are not aware of all aspects of a case to fully advocate for the client's best interests, or the "policies change" and when the time comes to go before the court, you think you don't have any options. I highly recommend Mr. McClenahen for anyone in a similar situation as my son's.

Professionalism at it's finest!

From the moment I received a referral from a professional colleague until present day, Matt has been very sincere, knowledgeable, trustworthy, approachable and highly professional. I highly recommend him, especially for DUI cases.

I had a difficult case of a second DUI, driving with a suspended license, and children in the car. Starting with the first phone call Matt took the time to explain everything, to thoroughly explain my options, and to calm me down and assure me that we would get the best possible outcome. He is very knowledgeable on PA laws and has a great relationship with the DA's and the judges in Centre County. He was able to negotiate a plea deal and then arrange for me to have house arrest for 4 months when I could have spent years behind bars. I will be forever grateful and I strongly recommend that anyone with a DUI or related charges to seek his help. My family and I were very impressed with his presence in court and his overall demeanor. I am now able to save my employment and provide for my family instead of sitting in a jail cell.
See all reviews

Matt is an excellent criminal defense attorney who works hard to achieve the best result for his client, including taking matters to trial when necessary.

I have known Matt for years and he is an extremely competent lawyer who is dedicated to his clients. In fact his office is near mine and he practices in the some of the same areas that I do. That does not matter to me because I have no problem endorsing him because I have seen him in action and he is extremely good. The people who hire him are in good hands.

I endorse this lawyer. Matt is a dedicated criminal defense attorney.

I endorse this lawyer. Matt is a dedicated client advocate.

I endorse this lawyer. Matt is a dedicated criminal defense attorney.

I endorse this lawyer. Matt is a very talented criminal defense lawyer.

I endorse Mathew for his work in criminal defense law.

I endorse Matthew for his work in criminal defense.

I had the pleasure of working with Matt when he was in the office of the pubic defender. Matt has a passion for criminal law and is a very strong advocate. If you have the need for a criminal attorney, Matt is a great choice!

I've been delighted to know Matt since our Penn State days. Matt is a sharp litigator and excellent advocate for his clients. He is smart, diligent, and someone I would want to represent me in court.

Matt is one of the most aggressive and zealous defense attorneys I've ever encountered. His knowledge and courtroom presence provided an excellent example for our colleagues in the Public Defender's Office and the entire criminal bar.