Chris is a former prosecutor in the Broome County District Attorney's Office who handled thousands of criminal and domestic violence cases. From traffic tickets to Felony Driving While Intoxicated, Violent Assault and First Degree Rape. Chris has brought over 100 cases to trial.

Chris is now utilizing his experience and knowledge in the area of personal injury law including motor vehicle accidents, falls, and dog bites. 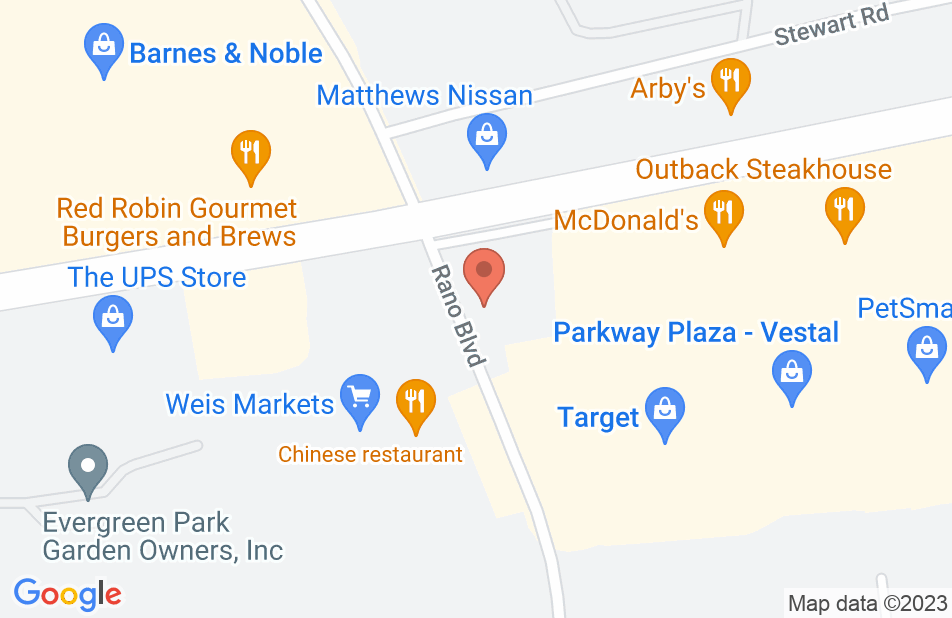 He did great for all of my cases with him

I first hired Chris Brown years ago for a marijuana "upm" ticket that he got dismissed. Two weeks later I got a DWI - they said I was high and I wasn't- and Chris got that dismissed. When I was recently hit by a car I called chris and he got me the money I needed. Like they always say on TV the insurance never wants to give you a fair shake unless you get a good attorney. Chris is better than good, he's excellent.
This review is from a person who hired this attorney.
Hired attorney

I was so nervous the first meeting but Chris was so helpful and didn’t leave any question unanswered. My nephew was injured in car accident and Chris quickly received us the maximum payout and he always returned my calls promptly. When I would call overwhelmed Chris did everything in their power to make sure I was taken care 100%. I would recommend anyone needing a personal injury and car accident lawyer to come to them.
This review is from a person who hired this attorney.
Hired attorney

Chris was professional and honest when it came to my case. Being charged and potentially being found guilty, Chris fought hard. Chris is very educated about NY Laws and it showed when he was representing me, he was able to dismiss my case. I would recommend Chris to anyone who is looking for a lawyer.
This review is from a person who hired this attorney.
Hired attorney

We highly recommend this Attorney. He handled our son's personal injury case and he hit every detail possible along the way. He was attentive and very responsive to our questions.
This review is from a person who hired this attorney.
Hired attorney

I received a speeding ticket while driving through upstate New York and Chris handled my case with professionalism and precise knowledge of the current laws. He was able to get the charge dismissed, with a little training my end. I wouldn't hesitate to recommend him to a friend. Thanks, Chris and Thanks, Amber
This review is from a person who hired this attorney.
Hired attorney

He handled a ticket and automobile accident (injuries) for me and it was a very positive outcome. He was highly professional and gave rational advice about not taking a plea agreement. He turned a stressful situation into one that had clearly defined steps to take. Would highly recommend!
This review is from a person who hired this attorney.
Hired attorney

My daughters case was very detailed and complicated, she was charged with 2 felonies involving assault. Chris Brown was able to prove her innocents, the jurors found her not guilty on both charges. Chris was very upfront and honest with his thoughts on the case, and felt my daughter had a very high chance of getting found not guilty when other attorneys were trying to talk her into ridiculous plea bargains and have 2 felonies. I am very greatful to Chris Brown for proving my daughters innocense.
This review is from a person who hired this attorney.
Hired attorney

I would recommend Chris Brown to anybody who needs help to get justice for their case. The odds were against me with an assault charge I was indicted on and after 9 months of fighting it, Chris helped bring home the victory with a verdict of not guilty at trial because I had no other choice but to take it to trial or else I would do prison time. Everything worked out just as Chris said it would and he fought very hard in my defense during this three day trial he knows his stuff and if nothing else he will make sure he fights to get justice for his clients. During this whole process he gave me reassurance and he was very reliable and thorough and helped me understand the law as well. I appreciate him a lot. Thank you Chris for everything.
This review is from a person who hired this attorney.
Hired attorney

Driving in Upstate NY, I experienced my first accident; and I received 2 traffic tickets that would have raised my insurance, added a colossal 8 points on my license, and cost me $450 for DMV’s driver assessment fee. I immediately called several law firms in the area for help. A few lawyers actually refused me outright because (they said) the county in which I received the tickets is notoriously difficult. Another attorney charged me $1000 upfront because he felt it was foregone conclusion that my case would go to trial. Another charged me $200 over his regular retainer fee solely because my case involved an accident. Chris Brown, however, was different. While requesting a reasonable, affordable fee, he told me that he would try his hardest to get my tickets reduced to something tolerable. Indeed, 1.5 months later, he obtained a plea agreement in which I incurred just 3 points instead of 8 points. That outcome allowed me to avoid DMV’s $450 Driver's Assessment Fee and kept my insurance rates from skyrocketing too much. Mr. Brown was quite amiable during our initial telephone conversation, and we were able to do everything by email. I strongly recommend Chris Brown for anyone in need of an honest, hardworking, efficient attorney.
This review is from a person who hired this attorney.
Hired attorney

Attorney Brown was a pleasure to work with. He was always very responsive and we felt confident with him at our side.
This review is from a person who hired this attorney.
Hired attorney
See all reviews

I have had the pleasure of seeing Mr. Brown work as I have waited for my cases to be called over the past few years. He has always shown a fanatical devotion to his client, a commanding understanding of the law, and treats everyone he meets with the utmost respect. He also has designed one of my favorite business cards. I happily endorse this attorney.

I have worked with Chris as opposing counsel when he was an Assistant DA with Broome County and I have also worked together with him after he left that office and Chris is very competent, reliable, and trustworthy. I recommend Chris Brown, Esq.

I endorse this lawyer. Attorney Christopher T. Brown knows the law extremely well and cares about making sure people understand their rights and obligations. Anyone needing assistance with a DUI and DWI law legal matter would be well served to contact him.

Adam Gee, DUI and DWI Attorney on Jun 20, 2016
Relationship: Worked together on matter

I enthusiastically endorse Chris Brown. Chris is an aggressive, motivated and very skilled attorney with a wealth of experience in the world of criminal law. His background as an Assistant DA and his connections to local law enforcement and local prosecutors make him the perfect attorney to represent people charged with DWI's and other crimes. Chris is one of the very few attorneys I feel comfortable referring a criminal case to because I know he will provide them the level of representation I would want for myself. If you are in need of a lawyer, you wont do any better than Chris Brown.

I highly recommend attorney Christopher T. Brown. He is a skilled litigator in several different types of law. I wholeheartedly endorse this attorney.

I highly recommend Attorney Brown. As a former prosecutor, Attorney Brown developed the experience and knowledge that has allowed him to become a skilled attorney in the courtroom.

You want a trial attorney who has the ability to convince everyone in the courtroom -- jury, judge, and spectators -- that justice is on your side. It takes a trial lawyer with the rare combination of skill, work ethic, and natural likeability to accomplish this crucial task. Because Chris Brown possesses this rare combination, you want him in your corner when the stakes are high.

Working with Christopher in his capacity as an Assistant District Attorney was always a pleasure. His hard work and preparation are evident in the courtroom at all times. Now, as a defense attorney, Christopher works tirelessly for his clients to achieve the best possible results.

Christopher is a fine young attorney who is able to relate well to his clients and also be persuasive to the courts and prosecutors he deals with. He has worked on both the side of the prosecutor and as a defense attorneys so he is able to see the various ways that a case can proceed. Having Chris Brown on your side gives you a real advocate who is going to do whatever he can to get his clients the best result.

I endorse this lawyer. I have worked with Chris on numerous occasions in several different capacities. Always professional.

Derek Wild, DUI and DWI Attorney on Nov 2, 2015
Relationship: Worked together on matter

I had the pleasure of working with Chris on a number of matters. He takes the time to give each and every client the attention they deserve. Chris is very well prepared in court and projects confidence which is supported by his abilities as an attorney. He is an excellent lawyer and I endorse him without hesitation.

I have known Christ for years as a coworker and against him while he was a prosecutor. He is a very capable and intelligent attorney with a wide degree of experience. I would definitely recommend him for anyone needing criminal defense.