USA Immigration Attorney Gihan Thomas is a Certified Specialist, Immigration and Nationality Law by the State Bar of Califonria, Board of Legal Specialization.  She has obtained her bachelor degree in English and American Literature from Alexandria University.  She obtained her Juris Doctor degree from University of West Los Angeles in 1998.  She has been practicing law for the past seventeen (17) years.  Her practice focuses exclusively since her admission on US Immigration Law.

Attorney Thomas has also represented thousands of immigrants before the Immigration Courts in filing asylums, cancellation of removals, suspension of deportation, adjustment of status and waivers for grounds of inadmissibility applications. She has also represented her clients before the Board of Immigration Appeals in filing appeals and motions to reopen.  She is respected as a well talented aggressive litigator, highly experienced with asylum cases. Her depth knowledge of the immigration field has brought this green card attorney to impressive results for her clients over the years.

Attorney Thomas has argued many cases before the Ninth Circuit and Eleventh Circuit Court of Appeals and has a winning record in her federal appellate review cases.  Most significantly, her published opinion Viridiana v. Holder 646 F.3d 1230 (9th Cir. 2011) sets a record in tolling the statute of limitation for asylum seekers victimized by immigration consultants that resulted in their failure to meet the one year statutorily deadline.  Attorney Thomas has also assisted the immigrant community in Sumolang v. Holder, 723 F.3d 1080 (9th Cir. 2013), a second published opinion, which extended asylum to a parent based on the harm occurring solely to the child.  Attorney Gihan Thomas iwas behind the decision of Chandra v. Holder 751 F.3d 1034 (9th Cir. 2014) wherein the Ninth Circuit found that changed country conditions as it relates to change personal change circumstances could vacate a final removal order.

Attorney Thomas has received many awards from the City of Los Angeles for her impressive work in vindicating the rights of immigrants in the United States.

Attorney Thomas appeared and continue to appear on several satellite stations such as LOGOS TV, Hope TV, C-SAT, and France 24, to discuss and answers questions and provides updates on US Immigration Laws. 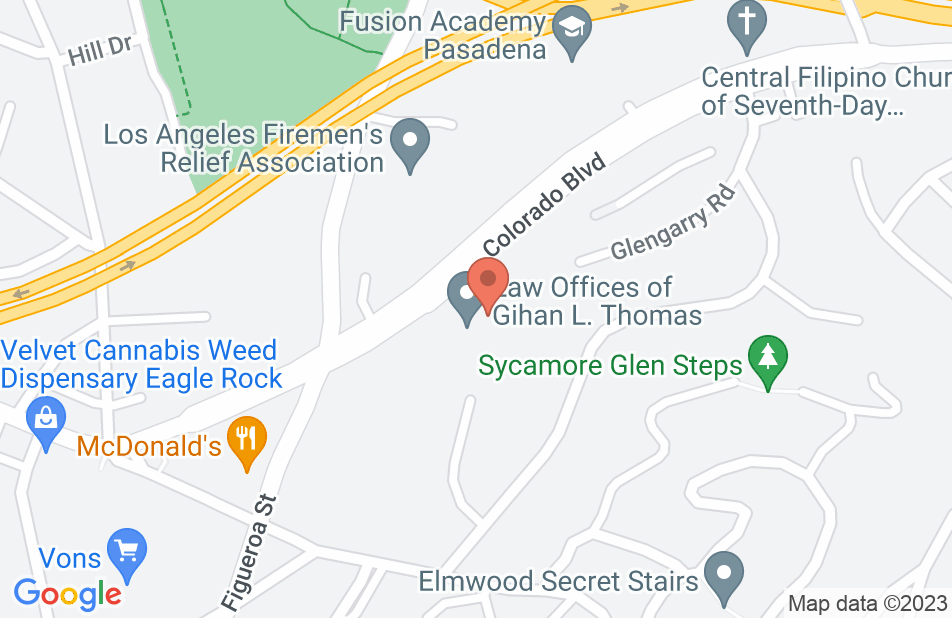 She is an Unbeatable immigration lawyer in the entire country... Wish you all the best Mrs. Thomas .. Thanks
This review is from a person who hired this attorney.
Hired attorney

Gihan is a professional lawyer, i had a very wonderful experience to work with her, she always deal with my asylum issue in an efficient way, with her help and support, my case approved finally, she could be your first choice in your case too. ❤️
This review is from a person who hired this attorney.
Hired attorney

When I searched my lawyer Ms Gihan L Thomas on website, I saw that she has years of experience about asylum and she has helped many persons pass asylum applications. When hiring her as my lawyer, I actually found she is professional, fast and easy-going. She helped me analyze my case, Trained with me and encouraged me. She helped me a lot.
This review is from a person who hired this attorney.
Hired attorney

I had a great pleasure working with the law office of Gihan L. Thomas, a very professional Lawyer, and professional staff. Mrs. Gihan really did an amazing job for my case, which was not an easy one at all. Thank you, Ms.Thomas ❤️
This review is from a person who hired this attorney.
Hired attorney

I highly recommend Ms. Gihan office for people seeking Asylum in USA and any immigration affairs. She is very professional and has a wonderful team of lawyers. I personally had a very difficult case and she helped me to get the approval. Thank you so much Ms. Gihan!
This review is from a person who hired this attorney.
Hired attorney

Best lawyer I ever met

Really, Gihan L Thomas is the best immigration law office I've ever met, I dealt with 4 law offices before and this office was the best, they prepare our case within 3 days due to critical timing, within less than 2 months we got recommend for approval for our case, it was unbelievable, the office crew were very processional, fast and accurate.
This review is from a person who hired this attorney.
Hired attorney

I had a great pleasure working with the law office of Gihan L. Thomas, very professional Lawyer , and her team also are very helpful they Made it simple for me on my asylum. they supported me and stood by me , I would like to thank her and her wonderful team for all the effort and support .i was hesitated to speak but she just make it simple for me Thank you Again and wish you all the best and more success in the future. now she is my trustful lawyer in anything to come
This review is from a person who hired this attorney.
Hired attorney

Ms Gihan l Thomas is awesome!! No words can describe my appreciation for her she is honest empathetic and professional she helped me to get my green card my case was so complicated but not for a super lawyer like her she is my hero ❤️ I’m so thankful for her help and I will forever recommend to anyone who is in need of great awesome immigration attorney!! Thank you
This review is from a person who hired this attorney.
Hired attorney

Thanks to Gihan L Thomas teacher and team for helping me.

Gihan L Thomas is a very honest, responsible, fact-seeking and rigorous, and a trustworthy teacher!
This review is from a person who hired this attorney.
Hired attorney

非常感谢Gihan和她的团队对我案子的帮助，整个过程很有条理，效率很高，给了我很多重要的建议，帮助我最终通过，他们很专业也很用心，再次感谢你们的付出！
This review is from a person who hired this attorney.
Hired attorney
See all reviews

I endorse this lawyer. Gihan is a passionate advocate for her clients.

I've referred several clients to Gihan Thomas. She addressed their issues quickly and the reviews I got back from them was excellent.

I have worked with GIhan Thomas on several complex criminal/immigration matters, Gihan is an experienced litigator and very knowledgeable of immigration law. She has helped many, many individuals avoid deportation.

Gihan Thomas is extremely knowledgeable about immigration law and passionate about her work. I have referred clients to Ms. Thomas and she has always given them an honest opinion based on her vast experience, about the possible outcome of their case. Once she accepts a case, she will work tirelessly on behalf of her client. I wholeheartedly endorse Ms. Thomas.

I know Attorney Gihan Thomas for 15 years and I endorse her as a lawyer as she is the peek of her career. She is highly focused and strong willed to get results for her immigration clients. Her outstanding knowledge of the law coupled with her meticulous preparation for her cases make her an excellent lawyer. Attorney Thomas is well respected and liked not only by her clients and colleagues but also judges as well. I would recommend her to anyone with immigration issues in a heart beat.

Gihan Thomas' legal skills and commitment to her clients are exceptional. Gihan takes cases many other attorneys refuse because of the complexity of legal issues and she does not rest until each of her clients is successful. Gihan's excellent legal work has been recognized by the Ninth Circuit Court of Appeals in multiple published opinions that have helped improve the law for immigrants. Gihan has a keen eye for spotting legal issues and finding ways to resolve her clients' cases and yet she is very personable and takes the time to develop a relationship with each of her clients. I highly recommend Gihan.

Ms. Thomas is incredibly knowledgeable with the law and works tirelessly for each of her clients. I had the honor of working for her as I attended law school and feel privileged to have had such an excellent mentor.

I've had the privilege of knowing Gihan Thomas for most of my life, and she is undoubtedly an exceptional attorney and mentor. She is hard-working, dedicated, knowledgeable, responsive to her clients and her peers, and is extremely passionate about her work. I would highly recommend her services.

I wholeheartedly endorse this lawyer. I have known her for many years now and she is always on top of breaking news and developments in immigration law. She is also a zealous representative of her clients in immigration court. She will review your case and honestly tell you what your chances of success are and what the best approach is in your case.

I endorse this lawyer. She is an absolute top in handling immigration cases. She is dedicated to her files, very knowledgeable about her laws and keeps updated with recent decisions. She is brilliant, professional, ethical and I recommend her services to anyone.

I have known and worked with Ms. Thomas for several years. She is very knowledgeable, extremely professional and dedicated to her clients. She is well regarded amongst colleagues and opposing counsel. I endorse this lawyer.

Gihan Thomas is an excellent attorney doing cases from the asylum office all the way to the 9th Circuit Court of Appeals. She prepares thoroughly for each case and is available to her clients for questions. She taught me a large amount about immigration and asylum law. I highly recommend her as an attorney.

I endorse this lawyer. While she is a competitor, she handles areas (appeals) that I do not. I have always been more than pleased with the results of cases that I have referred to her. There is enough work that sending the client to a colleague who has greater expertise is something that we should all do. I have also had the pleasure of appearing for her and thus I have seen her work up close - great lawyer!

I endorse this lawyer. Ms. Thomas and I worked as opposing counsel for many years. I was a government attorney and she was representing her clients. She always litigated her cases with total commitment and preparation and her client's were well-served by her representation. She is an excellent attorney and a true expert in immigration law. Her knowledge in Egyptian and Indonesian case law may be better than anyone I have encountered, though she is excellent in all immigration law.

I endorse this lawyer. Gihan Thomas is a high calibre immigration attorney whom I have had the pleasure of knowing for about a decade. She is well versed in the law, extremely dedicated to her profession, and high regarded not only by other members of the immigration bar, but also by the judges.