I am a dedicated attorney, husband, and father whose desire is to use my law degree to help those in need during difficult family situations. I grew up in Jacksonville, Illinois, and graduated from Creighton University School of Law in 2007. Prior to focusing my practice in family law I worked as an assistant prosecutor and criminal defense attorney. When I'm not working as an advocate for my clients, I spend time with my wife and daughter, play golf, watch sports and movies, and solve puzzle games.

I have 11 years of legal experience and a strong determination to outwit and outwork the other side. If you are in need of an understanding and dedicated attorney to advocate for you, do not hesitate to contact me at Worsham Law Firm to set up your consultation! 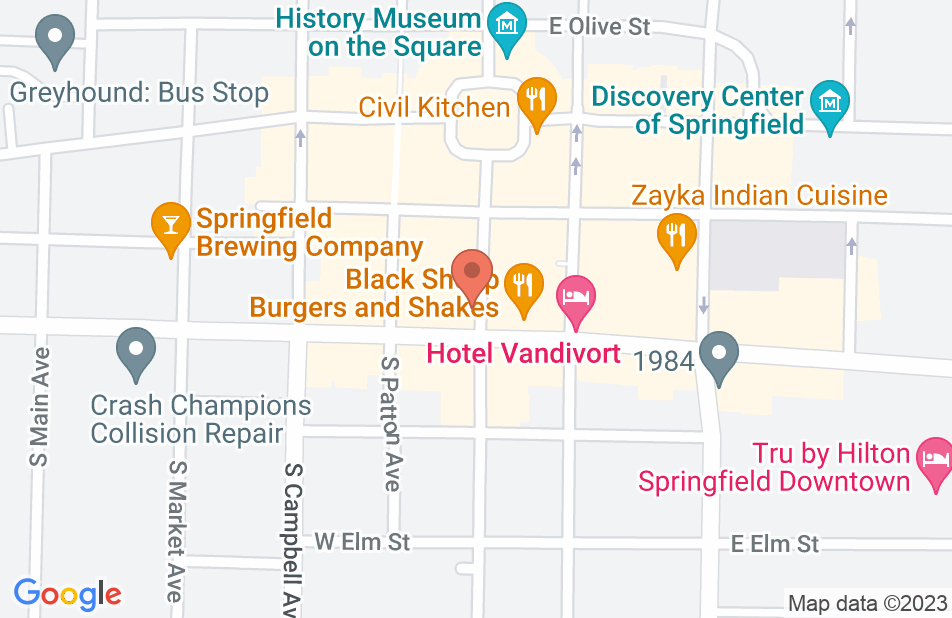 Made me feel important!

Worsham Law Firm has an excellent reputation in SW Missouri. I hired Dan because I'd heard great things about the firm. Dan and Ashley made me feel like I was their only client. Other lawyers told me I couldn't get sole custody, but Dan and Ashley not only gave me hope, but delivered! I highly recommend Worsham Law Firm!
This review is from a person who hired this attorney.
Hired attorney

I Would like to highly recommend Dan to be an attorney that would meet a clients needs. He is down to earth , thorough, honest and above all up front in all that he does and is one of the rare lawyers that can be trusted to follow through in any aspect of your case. If you have Dan you will have a good outcome that you can be sure because he is well respected and knows his stuff. He did a wonderful job for my husband and I and saw that the case was distributed fairly and worked well and evenly with his opposing counsels atty Elizabeth Warrick. Dan does and outstanding job and as far as we could tell so did Warrick. He is a sure choice if you need a good attorney.

I'm using the level pay plan Dan offers. It lets me afford his services and still get good representation. Having a fixed payment means I won't run out of money just because my ex-spouse can afford to run up the bill. Dan does a good job.

Efficient and Easy to Work With

Mr. Brogdon was easy to work with. Having access to my full file online was very helpful in quickly responding to all the tricks the other lawyer tried to pull. Dan was on top of my case and got me divorced quickly and fairly.

Dan gave me advice I could rely on. He told me what to expect and didn't sugar coat anything just to get hired. He showed compassion and caring for me and my kids. The level pay plan made his services affordable even in a difficult situation.

I hired Dan in June 2016. He did what was asked? Then months went by with NO work done and NO calls, NO emails. Why the hell should I pay him a $500 retainer fee for him to do nothing? Two days before trial 6MONTHS later, everything was settled in a matter of a few hours. 6 MONTHS LATER and THOUSANDS of dollars wasted. Settled. Just like that. Never even stepped foot into trial. What a waste of time, money and heartache. Will NOT recommend him, or use their office again.
This review is from a person who hired this attorney.
Hired attorney

I hired Mr. Brogdon in April of 2014 when I was being served with a paternity suit in Springfield, MO. I had just recently moved to Denver, CO for work and needed someone I could trust and rely upon in Missouri since I couldn't be there myself. He started out helpful and attentive, even acting with a sense of urgency and I was impressed with his work. Unfortunately, his work rate dropped off precipitously after the initial effort he put in and I spent the next 9 months upset, confused, and desperate for progress or answers. Specifically, I left several messages over the course of a few months and, despite assurances from his paralegal, never once received a phone call in return. The only times I ever received a call from his office was when they wanted to collect on the latest invoice. Each time they called me for payment I would oblige and then ask to speak to him. In response I always told "he will get right back to you." And still he never called me. I wasn't asking for much, just an explanation of the events as they unfolded and what to expect next. I wanted assurances that things were progressing well and none came. Instead, Mr. Brogdon would wait upwards of 4-5 business days before posting something on my personal MyCase account. He would be vague and completely inattentive to my needs or requests. I ended up having to hire a different lawyer in Colorado for advice and information on options because I could not trust Mr. Brogdon to do so. Then, when I asked about the things my local lawyer told me to address, Mr. Brogdon would either ignore me or respond in a derisive and condescending manner, neither of which provided any concrete solutions, just more frustration and anxiety on my part. Furthermore, I ended up doing all the work to organize paternity tests, teleconferences for mediation, as well as post-mediation negotiations (the plaintiff did not follow the agreed upon mediation agreement and decided to start changing things without my approval), and even had to proofread/reword documents. I say this because, when asked if the Parenting Agreement (which had no less than 15 errors) was up to snuff, Mr. Brogdon answered to the affirmative, which only furthered my distrust in him as a competent attorney. The case was eventually settled the day prior to the actual trial date which was a relief, but it didn't need to drag on that long. The plaintiff in my case actually repeatedly attacked me for stalling and dragging my feet when it was Mr. Brogdon's actions (or inactions rather) that were causing any and all holdups. It was already a nightmare situation to start, but Mr. Brogdon ensured that it would not get better, only more aggravating. So, in short, here is what to expect from Mr. Brogdon if you decide to hire him: 1) You will end up doing all the work by yourself. 2) He will not actually review anything on your behalf. You must double check his work. 3) He will never return a phone call and his response time on MyCase will be abysmal. 4) He will never respect you, your opinion, or anything you have to say. To him, you are a nuisance. But, he has no problems collecting his fee a day after the invoice is sent out. Do not spend a single cent on his legal advice or for him to represent you. That is, of course, if you aren't a masochist. If you are, then he is the exact lawyer you want in your corner. Good luck and godspeed regardless of your decision.

Dan Brogdon isn't concerned about his clients. He doesn't earn income by representing them. He charges them for churning paper.

Dan Brogdon encouraged me to obtain dozens of witness' statements. The day before the trial, he said these statements were inadmissible because they were hearsay. Yet, he charged me hundreds of dollars for reading and handling them! In court, he didn't object when the opposition used their witness' statements yet refused to use our witness' statements. While Brogdon didn't bother to ask for crucial evidence during discovery, he's been relentless about charging me for needless tasks he claims to have performed. Brogdon refused to call any of the six witnesses who were available to testify in person on my behalf, two of whom were at the court house. Nor did he present the evidence he had asked one of them to provide. When my spouse walked out, he left me with all the bills, no income, no means of support and nowhere to go. Brogdon's failure to use evidence and call witnesses resulted in picture of an equitable partnership. Nothing could be further from the truth. Brogdon's failure to address actual financial conditions resulted in a decision that appeared on paper to be an equitable division of property. In reality, my ex-husband lied about facts. The result was to leave me in a position of being $80,000.00 in debt to my former husband if I am able to re-open the business. After our initial meeting, it was clear Brogdon was unfamiliar with my case. Brogdon charged me hundreds of dollars for â€œtrial preparation, reviewing documents, exhibits, and preparing a trial outline,â€ yet the day before the trial, he had no notes, outline, or trial strategy. He asked me to give him a history of my marriage up to that day. He didnâ€™t take notes, make an outline or prepare me for questions likely to be asked. During the trial, Brogdon seemed preoccupied. I've paid Dan Brogdon about $1500. He is asking for $4080 more he claims he earned handling my case. This isn't money earned, it's money made churning paper. I do not recommend retaining Dan Brogdon as an attorney.

I've worked a number of cases with Mr. Brogdon, and he is an excellent choice for a family attorney. He advocates passionately for his client. He is a great negotiator when the situation calls for it, and he's not scared to take a case to trial if need be. I hope I work many more cases with him in the future.

Daniel is a dedicated attorney who keeps his clients' best interests at heart and achieves the best outcome for their needs.

Branden Twibell, Divorce and separation Attorney on May 11, 2016
Relationship: Fellow lawyer in community

I endorse this lawyer. Dan is not only a very sharp attorney, but also a great guy. I highly recommend Dan to anyone looking for a family law attorney that truly cares about his clients.

Travis Weems, Divorce and separation Attorney on May 5, 2015
Relationship: Worked together on matter

David Back, Divorce and separation Attorney on Apr 16, 2015
Relationship: Fellow lawyer in community

I have known Mr. Brogdan for several years now and wouldn't hesitate to recommend him for any legal matter you may encounter. He has become a compassionate, hard working legal advocate and will serve you well should you choose him as your attorney.

Dan is a seasoned trial attorney with the experience and acumen to represent his clients in a very professional manner.

I have had the privilege of working with Dan in the past. I can honestly say that he is one of the hardest working and most dedicated attorneys I have ever worked with. He was often the first one in the office and the last one to leave. If you have a complex matter that needs close attention to detail, Dan would good be a good choice to call.

Dan is a very knowledgeable, detail oriented and conscientious lawyer. Highly respected and very diligent in striving for the best results for his clients.