Attorney Brandon D. Derry graduated with a degree in marketing from the University of Northern Iowa in 1998 and received his law degree from the University of Minnesota in 2002. He joined the firm in 2007 and was promoted to shareholder in 2012 for his dedication to the firm and successful, hard work at the Madison location. He has collected more than $20 million dollars on behalf of his clients.

Attorney Derry joined the firm following years of insurance defense and personal injury work. He is licensed to practice in Iowa, Minnesota and Wisconsin as well as the United States District Court for the Eastern and Western Districts of Wisconsin. He is a member of the State Bar of Iowa, the State Bar of Minnesota, the Hennepin County Bar, the State Bar of Wisconsin, the Dane County Bar, the American Bar Association, the Wisconsin Association for Justice and the Minnesota Association for Justice. For two consecutive years, he has been recognized as a Wisconsin Super Lawyers Rising Star, which classifies him in the top 2% of all Wisconsin attorneys who are 40 or under or have been practicing for 10 years or less.

Attorney Derry is actively involved in the community, including working with local charities and participating in benefit motorcycle rides and events in Wisconsin, Iowa, and Minnesota. He is an avid Harley rider and frequently can be found riding with his father, who is also an avid Harley rider. He is an automotive aficionado and has been racing stock cars and attending motor sports events across the country since he was a child. He is a member of 4 Lakes – Capital City Harley Owner’s Group (HOG), ABATE of Iowa and ABATE of Wisconsin. 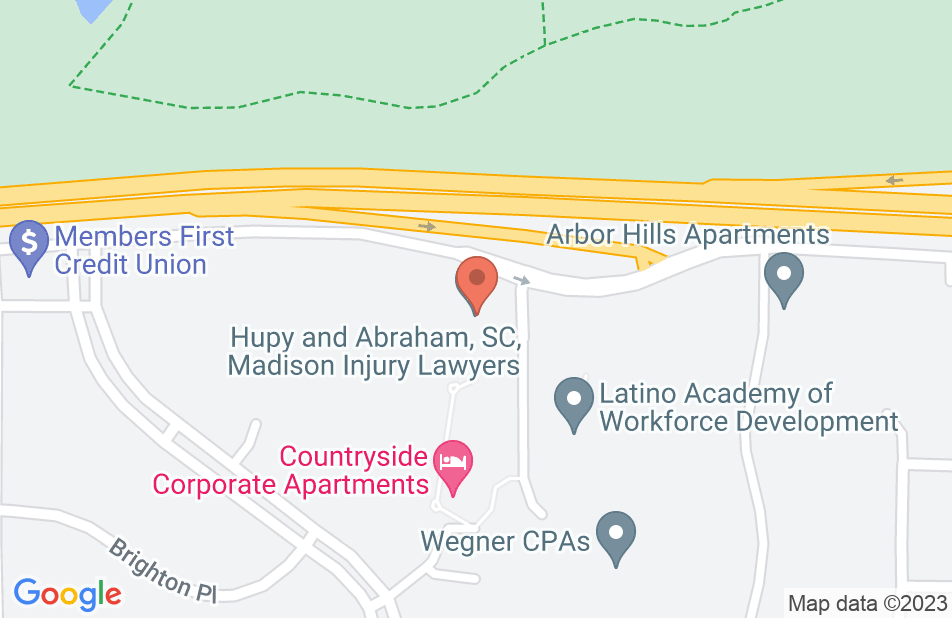 Not yet reviewed
Review Brandon Derry

Attorney Brandon Derry excels as an aggressive advocate for his clients' interests. I highly recommend him.

I endorse this lawyer. He is dedicated to client satisfaction and has all the tools to maximize a clients recovery at the settlement stage or more importantly, at trial.

Brandon is a very dedicated personal injury attorney. He really cares about his clients and has secured many large settlements over the years.

Brandon Derry is one of the most hard-working attorneys out there. He goes the extra mile for his clients and his highly respected in the legal community.

I’ve worked on many cases with Brandon and can personally attest to his legal abilities. He works tirelessly for clients and is very active in the community.

I endorse Brandon Derry. Attorney Derry is knowledgeable and professional. He works very hard and always strives to get the best for his clients.

I'm very proud to say that Brandon Derry is a shareholder in my law firm, Hupy and Abraham, S.C. Brandon started as an associate attorney and did such an excellent job that he was promoted to shareholder. For 3 consecutive years, he has been recognized as a SuperLawyers Rising Star (under the age of 40). He is licensed in Wisconsin, Iowa and Minnesota.

I endorse Attorney Brandon Derry. I have had the pleasure of working with Attorney Derry for several years and am continuously impressed by his work for the firm. He is one of the Top 100 Trial Lawyers and demonstrates exactly what it means to be a client advocate. Not only has he collected over $20 million on behalf of his injured clients, but he continues to work with local charities in the community to ensure that the public is fully aware of their rights as motorists.

Attorney Brandon Derry joined my firm in 2007. He was promoted to shareholder in 2012 for his dedication to the firm success. He has collected more than $20 million on behalf of his clients. For three consecutive years, he has been recognized as a Wisconsin Super Lawyers Rising Star, which classifies him in the top 2 percent of all Wisconsin attorneys who are 40 or under or have been practicing for 10 years or less. Each year since 2014, he has been named one of the Top 100 Trial Lawyers in Wisconsin by the National Trial Lawyers.

Prior to joining Hupy and Abraham, I handled a number of cases working against Brandon. What impressed me about him then was his easy understanding of the strengths and challenges of his case, his genuine concern for his clients and their wellbeing, and his courteous yet zealous advocacy on behalf of his clients. Working with Brandon over the last three years has allowed me to observe those talents up close, and I continue to be impressed. His recognition as both a Wisconsin Super Lawyers Rising Star and a Top 100 Trial Lawyer in Wisconsin tell the tale. He is tireless in his efforts on behalf of his clients. The proverbial “extra mile” is just the normal course for Brandon in working for his clients. I strongly recommend attorney Brandon Derry.

I endorse Brandon Derry. I have had the pleasure of working on several matters with Attorney Derry. He is hardworking and truly cares about getting his clients the best possible results.

Brandon Derry is an attorney I highly recommend. He gives his clients the most zealous representation possible, and his ethics are beyond reproach. He will go the extra mile for his clients, and is excellent in trial. He is one of the very best personal injury attorneys I know.

I endorse Brandon. He is a highly skilled attorney that is well respected in the legal community.

I have had the pleasure of working with Brandon for several years, but I can promise you this endorsement has nothing to do with the mere fact that he is a co-worker. My endorsement comes from having witnessed how incredibly hard he works and his impressive instincts, preparation, and intelligence in trying cases. I have seen him obtain large numbers of excellent settlements and win very difficult jury trials on a regular basis. He always provides his clients with honest and practical advise and counsel on their cases, and he has the knowledge and experience to do so with real authority. I suppose the best endorsement is that I would not hesitate to use him myself if I were to be injured by someone's negligence. If he is your attorney you are in excellent hands.