Kayrouz is one of the most recognized attorneys in Michigan, and the only woman attorney to own a major personal-injury law firm in the state. She built her career on a combination of legal savvy, hard work and a sincere empathy for the financial, physical and psychological needs of accident victims.

Ms. Kayrouz is as a pioneer in her field, effectively breaking down barriers to reach out to those in need of her services and growing an immensely successful enterprise.

Since earning her Doctorate in Juris Doctor degree in 1997, she has recovered tens of millions of dollars for clients. Her law firm is growing constantly, adding highly qualified attorneys and legal staff who treat each client with skill and compassion.

After earning her law degree, Kayrouz worked at Philo, Atkinson, et al. Known as the “father of personal injury law,” Harry Philo was a valuable and much-loved mentor. After four months, she was offered a partnership in the firm. After Philo’s retirement, she left the firm. Since then, the Kayrouz Law Firm has grown by leaps and bounds. Currently located on the fifth floor of the Southfield Town Center, the firm will soon occupy much of the building’s seventh floor.

Kayrouz was born in Lebanon where she experienced the ravages of war from an early age. This awakened her acute sense of justice. She began college at the American University of Beirut (AUB) as a pre-medical student. Emigrating from Lebanon at the age of 22, she finished her undergraduate studies Master’s degree from Yale in Ethics, with a concentration in Medical Ethics.

Kayrouz, who is fluent in four languages — several dialects of Arabic, French, Italian, and English — feels her job involves more than helping people recoup money owed to them by insurance companies.

“When you graduate, they call you ‘lawyer and counselor.’ I never understood the ‘counselor’ part until I became a practitioner,” she says.

“Then I understood that when people come to you they are, quite often, very wounded, not just physically, but also emotionally. And you have to really become a healer.

“You’re dealing not just with the economic loss and the physical limitations that people might have from their accidents, but also with their depression, their personal relationships, and their daily struggles. Suddenly you find yourself offering advice, both legal and psychological; guiding them and being a role model to them; reminding them of faith and the power of the mind.”

In addition to managing her successful law practice, Kayrouz also maintains an energetic role in community and social activism.

Kayrouz served as the national president of Auxilia, the premier Lebanese charitable organization, providing millions of dollars of aid to families in her native country. She currently serves as secretary of the D-MAN Foundation, which assists those injured in automobile accidents with private duty nurses, medical transportation, music therapy, and other services.

Kayrouz helped direct the Miss Lebanon Emigrants – USA 2012 pageant which was held in Michigan on May 24. The event attracted celebrities from around the world including hosting the Lebanese Minister of Tourism as well as the Lebanese Ambassador to the United States and other high ranking officials.

The winner of the prestigious Michigan pageant competes with other contestants selected from pageants in 35 countries each August at Castle Assouf in Dhour Shweir, Lebanon.

Kayrouz hosts her own Arabic language program every Friday on WNKZ 690 AM radio from 12:30 to 1 PM where she offers legal advice to her Middle-Eastern community and takes live calls from listeners. She is frequently told that listeners take their lunch break at 12:30 for the specific purpose of tuning in and taping her show. She also appears as a guest every Wednesday from 8:30 to 8:45 a.m. on “Good Morning, Michigan,” hosted by Laila Al Husini, also on WNZK.

In March 2013, Kayrouz launched the Joumana Kayrouz & Daughters with a $50,000 starting endowment that will provide health and medical assistance to individuals in need in Lebanon, and disseminate information on the challenges facing the families and children in need.

In December 2013, Kayrouz was invited by Governor Rick Snyder to the ceremonial signing of the two Public acts, 218 and 219, for supporting two new laws that protect accident victims from unscrupulous attorneys known as “ambulance chasers.”

Garden City Hospital opened the doors to the new birthing center in March 2014; after months of renovations to their oldest wing. Hospital president and CEO Gary Ley acknowledged the “substantial” support of Kayrouz and her donation for future families at Garden City.

Joumana Kayrouz was named a “Top Lawyer of the Year” for 2012 by DBusiness Magazine, the premier business publication of Detroit, in a survey of more than 18,000 Michigan lawyers.

She was named a “Presenting Sponsor” honored during the 50th Anniversary gala of the St. Jude Children’s Research Hospital.

In April 2014, Joumana Kayrouz was featured on the cover of Metro Times accompanied with an article written by Drew Philp.  Philp wrote this article after shadowing Kayrouz on more than five occasions in her office, home, and other public events so he can provide a glimpse “behind the billboard.”  Full article is available here.

Just recently, in June 2014, Kayrouz was named by Crain’s Detroit Business as one of the featured “American Dreamers.”  This recognition cites successful local men and women of Metro Detroit and their road to accomplishments.  The article feature can be found here.

In 2010 Ms. Kayrouz received the Trailblazer Award from the Lebanese American Club of Michigan (LACOM) during their 15th Annual dinner for her achievements in the legal field and for being an outstanding member of the Lebanese-American community.

Kayrouz is a devoted mother to her two daughters, Stephanie and Nathalie. She is somewhat of a fanatic about her pet dogs, Bella a Chihuahua and Pierre a French Bulldog. She loves to travel, but, except for occasionally longer trips to Lebanon, a typical vacation usually runs from Friday through Sunday. 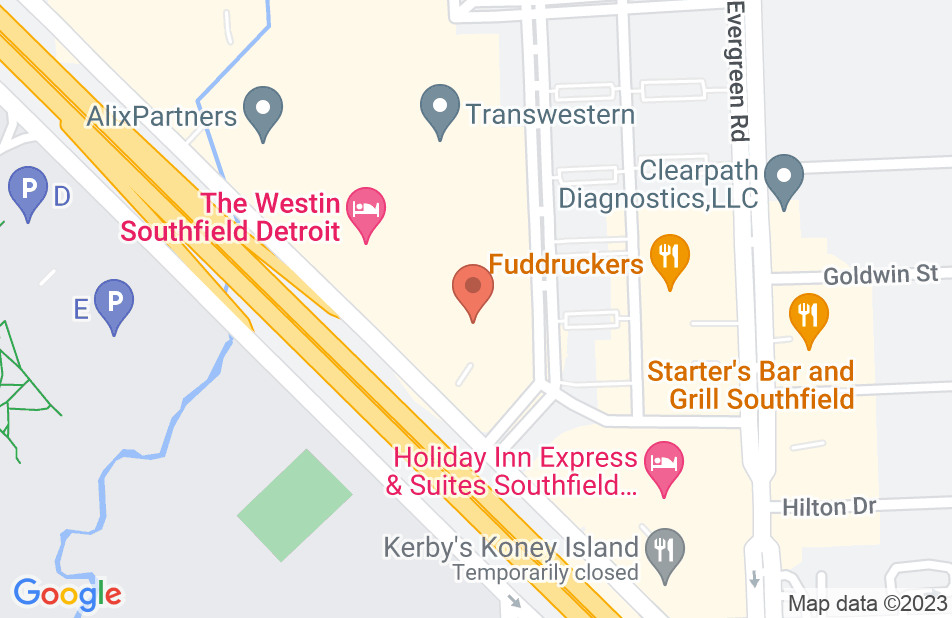 Wonderful people and very professional, they will never give up on you... I've been working with Tamara taha, and attorney John... I've tried more than one attorney, but none of them handled my case like this office of jumana kayrooz ... All respect highly recommend !!!
This review is from a person who hired this attorney.
Hired attorney

These people will fight for you even if your case was missed up, I've been dealing with many lawyersrs, but never seen any of the other lawyers professional as much as these people, I'm working with Mrs. Tamara taha and lawyer John ... Those people are the best !!!
This review is from a person who hired this attorney.
Hired attorney
See all reviews

Joumana Kayrouz is extremely knowledgeable about the law and a zealous advocate for her clients. Joumana and her entire firm are both respected and feared by their adversaries. When you need a personal injury attorney, you need somebody who is highly skilled and willing to stand with you every step of the way. You need an attorney who frightens insurance companies when they see their name on a case. When you must make the difficult decision on who will represent you for your case, I strongly recommend and endorse Joumana Kayrouz.

She is a very caring competent and compassionate attorney and counselor. Her belief in fighting for the victims against the insurance companies is legitimate and supported by her passionate and individual approach to each case.An attitude which is carried on in her entire firm.

Ms. Kayrouz is a terrific attorney. She is not only very knowledgeable about the law but cares deeply about her clients. She has developed a law firm which aggressively fights for her clients in a professional manner. Her clients are very fortunate to have Ms. Kayrouz working on their behalf.

Joumana is an exceptional lawyer and a great legal mind. Over the years, she has represented her clients with great diligence and passion resulting in multi-million dollar settlements and verdicts. I highly recommend Joumana and am happy to endorse her.

I endorse this lawyer. She is a true advocate for her clients. She combines a true compassion for the injured people who come to her with the skill and resources to zealously fight for their rights. Trust that you are in good good hands.

Joumana is a great attorney, mentor, and person. She not only has made a huge impact in the community but she has greatly assisted the minority community (unlike other firms). Joumana is a respectable business woman and knows how to hold her own in a traditionally male-dominated field. I absolutely love working for her and the morals she espouses.

I endorse this lawyer. She is the real deal. She is what the hype says she is. One of the most intelligent and critical thinkers of our time. She is a natural business woman and more importantly a pillar in our community for giving back. I'm blessed to have the opportunity to work for and learn from such a great person.

I happily endorse this lawyer. She is an excellent attorney and a role model for the community.

I endorse Ms. Kayrouz. She is an expert and leader in the personal injury field. Through years of experience and knowledge of the law, combined with her incredible compassion for her clients, Ms. Kayrouz successfully fight for clients' rights.

Ms. Kayrouz entered the extremely competitive field of personal injury attorneys in Michigan and in a short time has distinguished herself to be among the best. She is extrenmely bright, incredibly hard working, very knowledgeable, and always watches out for the best interests of her clients. Ms. Kayrouz fights hard for and succeeds in obtaining justuce for injured victims of negligent actions of others. I endorse here without qualification.

I have known Joumana for a number of years and have had the opportunity to observe first hand the care, skill and sensitivity that she brings to each of her cases. She is a very fine advocate for her clients, and is an exemplary attorney in our community.

I endorse this lawyer's work. Joumana is a highly competent Personal Injury lawyer who refuses to take no for an answer. She works very hard for her clients and gets great results on their cases. I have personally worked with Joumana for the past two(2) years and would not hesitate recommending her as an attorney in any personal injury case.