Justin J. Wyatt graduated from Mercer University Law School in 1993. While attending law school he clerked for the United States Attorney’s Office for the Middle District of Florida during the summers of 1991 and 1992. Upon graduation, Mr. Wyatt became an Assistant State Attorney for the Nineteenth Judicial Circuit in Vero Beach, Florida until 1995, when he became an Assistant Public Defender for the Thirteenth Judicial Circuit in Tampa, Florida until 1997. As both a prosecutor and public defender, Mr. Wyatt was lead counsel in over 100 jury trials.

After moving with his family to Georgia in 1997, Mr. Wyatt worked for DeVille, Mihollin & Voyles until 1999 when he decided to start his own firm. In June 1999, he began Justin J. Wyatt & Associates which is located in an historic home just a few blocks from Marietta Square and the Cobb County Courthouse.

Justin met his beautiful wife, Stephanie, when they were both attending law school at Mercer University. The Wyatts live in Dunwoody, GA and have two wonderful children.

“In the heart of every lawyer, worthy of the name, there burns deep ambition so to bear himself that the profession may be stronger by reason of his passage through its ranks, and that he may leave the law itself a better instrument of human justice than he found it. 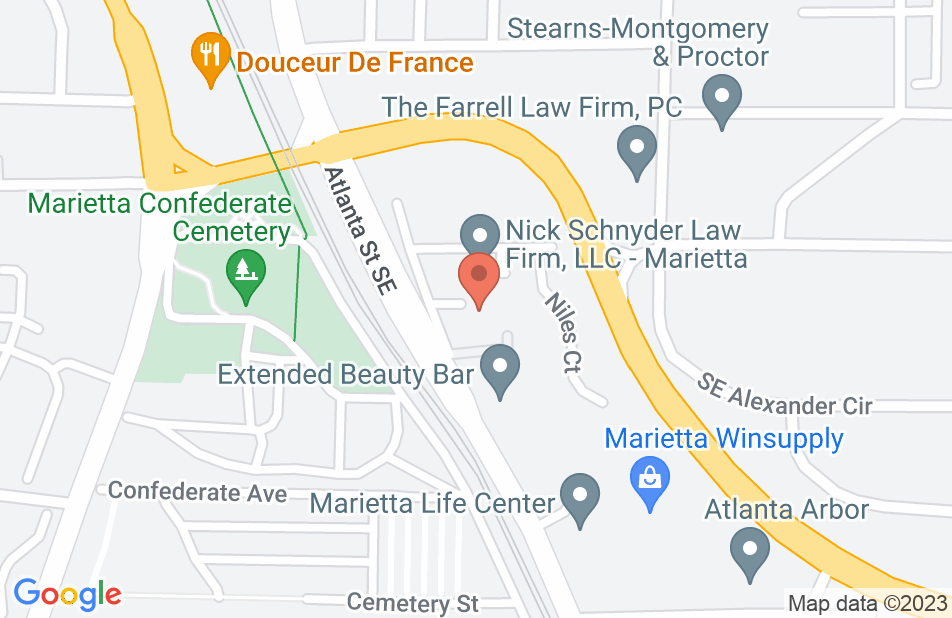 I definitely recommend Justin Wyatt. We hired our old attorney back in December of 2018. And he did not do anything we paid him to do. We spend thousands and thousands of dollars to basically get nothing done. Then we switched to Justin in October 2019 and he had our case finished in less than two months. We got more than what we wanted. And switching to him was the best decision we ever made! We definitely recommend Justin and his paralegals. They constantly kept us updated on things that were going on. And we couldn’t thank them enough! We are so Thankful and will definitely use them for any future needs!
This review is from a person who hired this attorney.
Hired attorney

We hired Justin to get custody of our daughter who was 14 and wanted to live with us. It was a long process but Justin and his staff helped us every step of the way. Justin was like a bulldog in the courtroom and give it his all on our behalf. I would recommend him and his staff to anyone who needs help with child custody for sure.
This review is from a person who hired this attorney.
Hired attorney

I thank God for Mr. Wyatt he and his staff helped me get thru a very difficult time in my life. He was very professional and cared about my situation and he made sure that I was alright. I would recommend him very highly.
This review is from a person who hired this attorney.
Hired attorney

Mr. Wyatt and his staff quickly and kindly helped move my divorce proceedings to a neat and speedy conclusion. They kept me informed and were available to me anytime I had questions or needed assistance.
This review is from a person who hired this attorney.
Hired attorney

I hired Justin for my wife over a custody battle with her ex husband. My wife had a horrible attorney resulting in the transfer of custody to her ex husband. The attorney was the worst and didn’t fight for her in court. So her ex husband who cared less about seeing his kids or paid child support got full custody. We were shocked. My wife was devastated. Not only missing her kids but paying child support for them. We then hired Justin. And wow what a difference an attorney can make. This man fought hard and not only does my wife have her kids back but her Ex is now paying child support as he should. This man is a damn good attorney. Even got applauded and the officers in the court room were shaking his hand when court was over. He will fight for you and knows the law very well. I have since then have had my own encounters and have obtained Justin’s service. I already know the results bc I have seen this man in action. He will not back down and will fight for what is right. He may seem a little arrogant at times but I’m sure that’s because I thought I knew best when I should have been listening to him. He doesn’t always answer all my questions or gets back to me right away but he knows the law and what’s best. Trust in him and he will help you. He is one of the best and I thank him for all that he has done for me and my family. Praying for the outcome we are looking for in mediation. I know things are going to go well because Justin has my back!
This review is from a person who hired this attorney.
Hired attorney

Feeling safe in a scary process....

I was extremely scared knowing I was getting a divorce. The scariest part was my concern for my son and how this process would effect him. Justin and his team guided me through the process. Justin has gone above and beyond. Seeing him in the court room knowing he was on my side was the best feeling ever. The best way to describe it is like having your big brother confront a bully for you. You will see other reviews on other sites from me. That is how much I recommend Justin Wyatt.
This review is from a person who hired this attorney.
Hired attorney

Justin Wyatt is an excellent attorney. He knows the law and is a beast in the courtroom. My case was going on for more than two years with 2 different attorneys who was unsuccessful at getting this resolved. My case was appointed to guardian ad litem Francis Marian Weeks who was extremely bias from the start. She recommended that my 7 year old daughter whom I've raised her entire life be awarded to her father and for me to pay CS. Justin Wyatt and his assistant Mike were great as far as communicating and presenting the facts in court. He fought tooth and nail with Mrs. Weeks and the opposing attorney. I am very satisfied with the outcome. Thank you so much for the compassion and hard work.
This review is from a person who hired this attorney.
Hired attorney

Justin and Chris have been an awesome team to work with. Justin is very knowledgeable of the law, he assisted me with a big settlement having little information to go on, and the information he had was very old. WE WON!! Chris is very understanding of my case, and promptly responds to any queries I have had and continue to have. He is awesome!
This review is from a person who hired this attorney.
Hired attorney

Justin Kicks Butt In the Courtroom

I'm involved in a major case where child's custody is at stake in an international dispute with criminal, civil, and international law issues. Last Friday I was defending a contempt complaint from my ex before a brand new Judge. My ex was asking the Court to throw me in Jail. When we walked out of the courthouse I was not only a free man, but the Judge had declared I was to have sole legal and physical custody, and my ex was ordered to pay my attorneys fees! Justin Wyatt is very strong in the courtroom. His work as a former prosecutor comes through when he seizes on an issue in cross-examination and squeezes it for all it's worth. This is clearly his strong suit. If you have a lying ex that you want to see exposed before the Judge, he's your man Be sure to feed him the appropriate facts and evidence, and desired outcomes in a clear manner, in writing. Your case is far from his only case, and he does not have superhuman memory, or telepathic abilities. (This almost became a critical issue in one hearing, but he is very nimble on his feet, and turned it around quickly)
This review is from a person who hired this attorney.
Hired attorney

AWESOME, AWESOME and then SOME!!!

Mr. Wyatt knows the system and he is extremely knowledgeable of the laws. He is incredibly bright and very articulate. He has represented me in 2 cases that he won and I was awarded my attorney fees. He is very reasonable and honest, gets the job done and he knows the law inside and out. I highly recommend him. A++++++++.
This review is from a person who hired this attorney.
Hired attorney
See all reviews

I endorse this lawyer.I have had the opportunity to refer to Justin two different matters which was outside my expertise. The results obtained were outstanding. The legal fees requested were eminently fair. I highly recommend Mr. Wyatt and his staff

Justine is an excellent attorney. He is very knowledgeable of the law and a highly skilled litigator. On top of that, he is a really good guy to have in your corner. I strongly endorse him.

Mr. Wyatt is a tenacious and highly skilled lawyer. He is well respected and does a great job for his clients.

"I have known Justin Wyatt for many years and have observed him in the courtroom and worked alongside him on multi defendant cases, including death penalty. He is a formidable and well prepared advocate known throughout the legal community for getting outstanding results for his clients."