Jeffrey R. Bellomo, Esquire is a Certified Elder Law Attorney by the National Elder Law Foundation under authorization of the Pennsylvania Supreme Court.  He received an LLM in Taxation and Estate Planning Certificate from Temple University School of Law.  He received a B.A. degree with a program of emphasis in Political Communication, with honors, from Juniata College.  He received his Juris Doctor from Widener University School of Law.  He then clerked for the Honorable David L. Ashworth of the Lancaster Court of Common Pleas.  He is admitted to the Bar of the Supreme Court of Pennsylvania and the U.S. District Court for the Middle District of Pennsylvania.  He is a member of the Pennsylvania and York County Bar Associations as well as the United States Supreme Court.  He is the Past Chair of the Young Lawyers Committee of the York County Bar Association.

He has been named a Rising Star for by Pennsylvania's Super Lawyers since 2010.  Rising Stars are selected based on peer nominations and professional achievements. This honor is received by only 2.5 percent of the total lawyers in Pennsylvania and is inclusive to top lawyers who are 40 years old or younger.  In 2011, Mr. Bellomo was accredited as a Certified Elder Law Attorney by the National Elder Law Foundation, the only organization approved by the American Bar Association to offer certification of Elder Law as a specialty area.

He is an active member of the Juniata College Alumni Associations.  Jeffrey is currently the Solicitor for the Treasurer's Office of the County of York and the Center for Independent Living Opportunities.  He is also a counselor for SCORE and an ambassador for the York Chamber of Commerce.

Jeffrey resides in West Manchester Township with his wife and daughter. 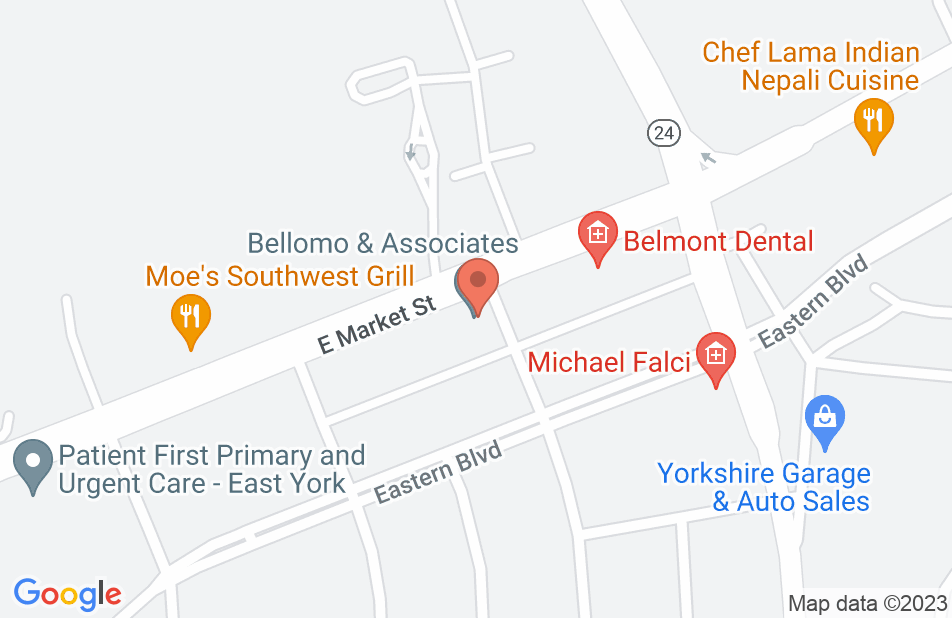 Both Jeff and Bill made me feel completely at ease. I trusted them both, knowing they had my best interests at heart
This review is from a person who hired this attorney.
Hired attorney

Hello, My name is Michele Calp. I am the Power of Attorney for my sister who is in a nursing home. My niece and I were in the terrible position of having to find a nursing home for my sister who has dementia. We were not in the position to pay privately for her nursing care, which meant we we would have to apply for Medicaid. We attended a seminar on Elder Care Planning that Bellomo was holding. We set up a meeting and from that point decided to have them work with us. And we are glad we did. The work that is involved in getting the paper work together to apply is daunting. They took so much pressure off of our shoulders. The people there are so easy to work with and make you feel that they will do all they can to help you. Thank you.
This review is from a person who hired this attorney.
Hired attorney

My wife and I had an unexpectedly valuable experience when we signed on with Bellomo. Our questions were encouraged and answered to our satisfaction. All members of the staff were very knowledgeable, very pleasant, and helpful in every way. We made a wise decision when we called Bollomo. Geralh E. Hartdagen
This review is from a person who hired this attorney.
Hired attorney

100% Great communication, follow ups and responsiveness! Jeff and his team were the best and we’re able to explain complicated legal processes in simple easy to understand terms.
This review is from a person who hired this attorney.
Hired attorney

What stands out to me from this experience the most is….“The workshop was very informative.”
This review is from a person who hired this attorney.
Hired attorney

My family went to Bellomo Associates because my father's health was declining because of dementia. We came to Jeff for information on Medicaid. The associates helped us to gather the information needed to complete the required forms, completed the forms, and submitted them for us. They were very professional and thorough. Communication was great via telephone and email, My father did receive Medicaid and after 2 months of home care he was placed in a nursing home. The transition to Medicaid was very smooth, no problems at all. I have recommended Bellomo Associates to others since our experience was positive.
This review is from a person who hired this attorney.
Hired attorney

We continue to be very pleased with Jeffrey Bellomo and his staff. Jeff is an extremely caring person who took time to carefully listen to us and understand what we hoped to accomplish for our family. There was no rush to complete the process and all of our questions and concerns were discussed. We are very pleased and hope to have a long relationship with him as well as his staff.
This review is from a potential client who consulted with this attorney.
Consulted attorney

Jeff Bellomo created our estate plan. He was amazing and made the entire process easy and comfortable. When making decisions about our living will, our estate and the final distribution of our assets, Jeff was a man with wisdom! I would recommend him to anyone and have!
This review is from a person who hired this attorney.
Hired attorney

Jeff has recently worked on my POA and wills development. He showed empathy and professionalism through this process. I would highly recommend him and his firm for future services
This review is from a person who hired this attorney.
Hired attorney

Attorney Jeff Bellomo did a fantastic job helping me with POA, will, and estate planning. He is always available for questions, and returns all calls and emails promptly. I personally have recommended many to Attorney Bellomo!
This review is from a person who hired this attorney.
Hired attorney
See all reviews

Jeff is one of the finest attorneys in our area. We have worked together on many projects and he has always provided his clients with excellent representation. He truly cares about his clients and you will be served well by he and his staff.

I endorse this Jeff as an outstanding Elder Lawyer.

I endorse this lawyer. Jeff knows his stuff. The York, PA area is lucky to have him. I call Jeff to bounce ideas off him al the time. He never lets me down. He won't let you down either.

He is your go to attorney for Elder Law Issues. Smart and able to tackle any thing you need.

I highly endorse this lawyer.

Jeff and I met through our membership in a national organization for estate planning attorneys. Do to his expertise, Jeff is routinely asked to present at national conferences. Jeff is without a doubt one of the attorneys in our organization who stands out. I would not hesitate to recommend Jeff to anyone. His clients are lucky to have him.

I endorse this lawyer. Attorney Bellomo provides excellent and comprehensive service to his clients and does so with heart. He consistently conveys his care and competence to his clients as well as to his colleagues, and that makes him stand out and shine as a practitioner and a person.

Jeff is a colleague of mine and a fellow member in a national organization we belong to called Lawyers With Purpose. It is very fitting that Jeff belongs to an organization with this name because he truly cares about his clients and making sure that their goals are being accomplished. Not only is he extremely bright, but he is very creative when it comes to the planning he does for his clients. He does not take a "one size fits all" approach as I have seen others in our field do, but rather looks at each client's particular circumstances and makes sure that the planning reflects their life and goals.

Jeff is a dynamic force in the legal community when it comes to estate planning and elder law. He is always searching for ways to better serve his clients. Jeff will go the extra mile to find the best solution for his clients problems. I would not hesitate to refer my friends and family to Jeff for estate planning. I am confident he and his staff would do an excellent job for them.

Jeff is a compassionate attorney. He has developed a system to help his clients identify and prioritize their estate planning concerns. He presents several planning options to his clients. The end result is that each client get a customized estate plan unique to their individual needs.

Clients seeking elder law services delivered with creativity, competence and compassion need look no further than Jeffrey Bellomo. A recognized national leader in the elder law field as a Certified Elder Law Attorney, Jeff's education and experience also enable him to navigate the complex provisions of the Internal Revenue Code and their often novel application to each client engagement, thanks to his advanced law degree in taxation (i.e., he earned an LLM in taxation from Temple University School of Law). Finally, Jeff is a devoted husband and father. He fully understands and appreciates his role in helping families achieve peace of mind regarding their long-term care and estate planning. I am proud to recommend my friend and colleague Jeffrey Bellomo without reservation.

I endorse this lawyer. He is both intelligent and personable. Knows the questions to ask and is able to quickly provide multiple options to solve proposed challenge.

Jeff Bellomo is a superb Elder Law Attorney. As a Certified Elder Law Attorney by the National Elder Law Foundation, I have confidence in his knowledge and abilities. He is passionate about protecting his clients and helping them through the maze of rules and regulations involving estate planning, Medicaid and Veteran Benefits. I endorse this lawyer.