Going through a divorce is one of the most stressful times of your life.

Mr. Tomaio is certified by the Supreme Court on New Jersey as a matrimonial law attorney.  He has also been included on the Super Lawyers list, published by Thomson Reuters, as seen in New Jersey Monthly Magazine in 2008-2011 and 2013-2020. The qualifications or requirements for being included on said list can be viewed at www.superlawyers.com. No aspect of this advertisement has been approved by the Supreme Court of New Jersey.

Mr. Tomaio is the only New Jersey Divorce attorney to be approved and recommended by the New Jersey Firefighter’s Mutual Benevolent Association.

Mr. Tomaio routinely handles complicated divorces and has also been involved in a high profile divorce as seen on NBC’s Dateline. Mr. Tomaio represented Mr. Duncsack, for whom he fought and won primary custody of his two young children. Mr. Duncsack was murdered by his father-in-law, Ed Ates, shortly after a Judgment of Divorce was entered. Mr. Ates is currently sentenced to life in prison.

Mr. Tomaio has served as a panelist for the Morris County Matrimonial Early Settlement Panel Mediation Program and has been appointed as an expert, specifically as a Guardian Ad Litem, to protect the interests of minors during matrimonial litigation. He is also a member of the Executive Family Law Committee for the Morris County Bar Association and New Jersey State Bar Association. He has also lectured for the New Jersey Institute for Continuing Legal Education. 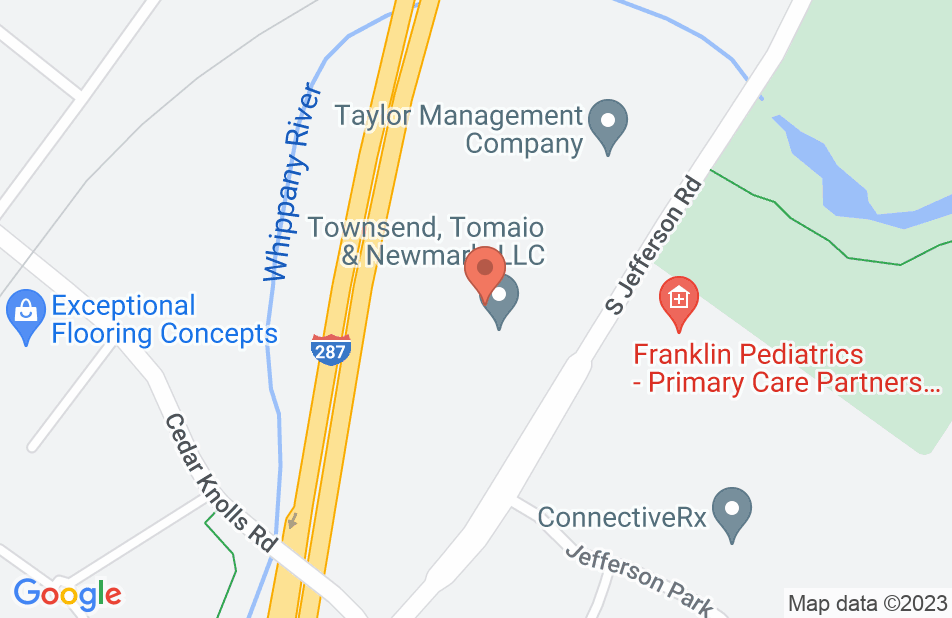 Empathetic, knowledgeabe, and professional. Dominic is a great communicator. I felt very comfortable working with him. He told me what to expect and how he was going to proceed with my case. Dominic has kept me in the loop throughout the entire process. I am very proud to have him as my attorney. I would recommend him without a doubt.
This review is from a person who hired this attorney.
Hired attorney

Dominic was an excellent attorney. I was married to a Wall Street/politician. I had a very complicated case and Dominic was very knowledgeable about the nuances of my case. It was a two year battle and I felt i was in excellent hands at this stressful time. Dominic is a truly great lawyer. I was very happy with my settlement and Dominic fought for me every step of the way. His staff is very professional and compassionate too. I would highly recommend Dominic to anyone going thru such a life changing event.
This review is from a person who hired this attorney.
Hired attorney

Dominic Tomaio should be your next lawyer

Dominic Tomaio has been a very precise, consistent and dependable lawyer while going through a horific divorce and domestic violence. He has also helped me understand my rights in the court system and dealing with the law. I have recommended him to a family member, and two other friends of mine knowing that he would do the very best to represent them as he has done for me. I would highly recommend him to get the job done, despite the issues.

Dominic is not only an excellent and very knowledgeable lawyer but also a fair and outright nice human being. He has a straight forward approach, can argue very well in front of a judge and has a sense of realism of what is achievable. Dominik is wonderful to work with and very efficient. Unlike many other divorce lawyers, Dominic is not trying to ignite conflict to generate fees. I fully appreciated his help and would recommend him strongly to any of my friends. In my experience with divorce lawyers, he is a rare "find".

Dominic handled my mediation and made it a very simple process. We were able to resolve all of our issues within 4 or 5 sessions with a fair agreement. Dominic was very easy to talk to and kept the situation calm through all of our sessions and made us both aware of what we needed to give in on or give more of in order to get through the process as quickly as possible and it didn't cost us a lot of money. I would recommend Dominic Tomaio as a mediator to anyone looking for a fair resolutions of their issues.
See all reviews

I endorse this lawyer. I have had several contested divorce matters with Dominic. He is a very worthy adversary and zealous advocate for his clients.

I endorse this lawyer. Dominic is an experienced attorney whose participation and comments in Avvo show his commitment to serving clients as well as his level of experience. He is an excellent attorney that I recommend wholeheartedly.

Dominic is an experienced and respected matrimonial and family law attorney, dedicated to his clients. He is willing and able to negotiate a favorable settlement but prepared and skilled to take an issue to trial when appropriate. He has an excellent reputation with adversaries and the Court.

I endorse this lawyer.I have found Dom to be professional in demeanor, always perpared, a zealous advocate, a worthy adversary and dedicated to his clients. My observations and endorsement of Dom, are a product of personal experience I have had with him in cases where he served as adverse counsel. In those cases, he always achieved a just and positive result for his client. I would have no hesitation in recommending Dom to anyone in need of family law represntation.

Dominic is a diligent attorney who works with his clients to achieve a fantastic result for them. I would highly recommend him.

I endorse this lawyer. Dom is an excellent attorney and an expert in family law. He is responsive, caring and intelligent. Dom is a problem solver rather than a problem maker. I trust him and, as a result, referred my close relative to him. Dom quickly understood the complex family law issues and was able to settle the case prior to trial. I highly recommend Dom for any family law or divorce case.

Dominic is a thorough, aggressive and practical attorney to have on your side in any divorce or family law matter.

I endorse this lawyer. He is a skilled trial attorney and a thoughtful negotiator.