Get the compensation you deserve. Experienced personal injury attorney. Call for a free consult!

In 1992, Andrew Garruto became a trial lawyer in an active litigation firm before practicing law on his own.  His newly built office is located in his hometown of Nutley, New Jersey, and he also has an office in downtown Manhattan.  Mr. Garruto concentrates his practice to personal injury claims, involving any incident where one’s negligence causes injury to another, as well as Workers’ Compensation claims. 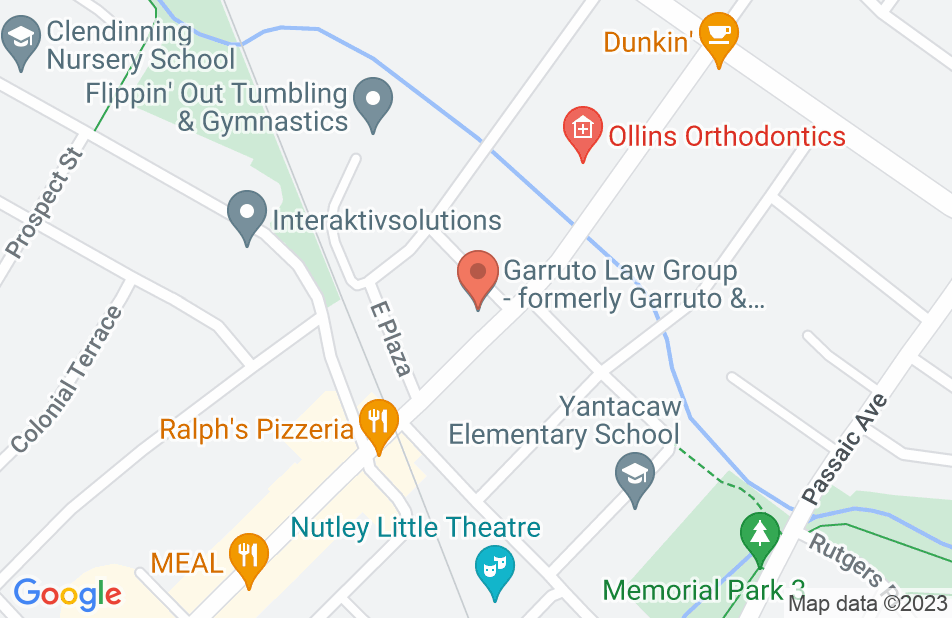 I was injured in an accident and retained Mr. Garruto as my attorney based on a few referrals of people that I hold in high regard and it was an excellent decision. Mr. Garruto has a vast understanding of the law and guided me through the complicated legal process step by step and made it very easy for me. He was always available for my questions and concerns and I was able to concentrate on healing while he was handling all the legal aspects of my case. I would highly recommend Mr. Garruto to anyone that would require similar legal representation.

Mr. Garruto was available and friendly whenever I called or requested anything. He won my case and made me feel protected. I would definetly recommend him to my friends and family because I trust him.He is diligent with good morals and overall a superb attorney that really is on your side and works with you.

The first experience I had with Andrew “Andy” Garruto was shortly after I graduated college and was hired to work with him as a paralegal. He proved to be an excellent mentor, extremely knowledgeable, supportive, patient, and kind. His genuine character, integrity, and care for clients left a lasting impression on me that I have carried throughout my career. Andy continues to successfully serve his clients today with the same level of integrity and exceptional care. He is very easy to speak with and takes the time to really listen. His accomplishments and reputation as an attorney truly set him apart from others. If you have the opportunity to work with Andy and his staff, know that you are very fortunate and in good hands.
This review is from a potential client who consulted with this attorney.
Consulted attorney

Review of Andy Garruto's Firm - Would Highly Recommend his office

I found the office of Andy Garruto very helpful. The team was always quick to respond to any questions I had and very helpful. They were sincere and very knowledgeable. I still stay in touch with their office and my case has been settled for quite some time---that should tell you something about Mr. Garruto. I highly recommend his office.
This review is from a person who hired this attorney.
Hired attorney

I can't say enough of the professionalism that Mr. Garruto represents. I have consulted with Mr. Garruto on several occasions and he has provided me with expert advise. Each time I called him, I felt like I was speaking to a friend not an attorney. He knows his stuff and most important put my mind at ease. I highly recommend Mr. Andrew Garruto.
This review is from a potential client who consulted with this attorney.
Consulted attorney

A No Frills Kind of Guy!

Andrew was the perfect lawyer for my case because going into it I was extremely terrified of the entire process. It made me anxious and I know I drove him, his staff, and my parents NUTS about it. But every SINGLE time I had a question or felt uneasy regarding an aspect of the case, Andrew was RIGHT THERE either in person or on the phone at 10pm talking to me about it and calming me down! He is extremely professional and what I mean when I say he is a "no frills" kind of guy is that he will not sugar coat anything for you. Maybe because I also do not sugar coat things for people is why we got along so well but when it comes to lawyers you definitely want to deal with someone who knows what they are doing (ANDY ALL THE WAY!) and who doesn't sugar coat responses to you or the plaintiffs. I hope to see you again Andy, just not for legal business :-)
This review is from a person who hired this attorney.
Hired attorney

Andrew is an excellent attorney. He explained all legal ramifications and was extremely attentive to every detail of my case. I highly recommend him.
This review is from a person who hired this attorney.
Hired attorney

Andrew was very clear on the rules and regulations per NJ. Also, was very informative about how I should go about my situation. I will definitely recommend him.

Andy Garruto is an excellent and most importantly an effective attorney. I waited for my baby's pictures for over 2 years and once Andy got involved I received them in a matter of couple of months. He is down to earth, professional and dependable. He would check with me often ( and from the time stamps on the emails I don't know if he ever sleeps - he is always accessible). I know he had more important cases than mine but I was treated as if I was his number one priority. Overall it was a great experience I would highly recommend his services to anybody!

This lawyer has confidence, credibility, intelligence and professionalism!

I sought legal counsel from Mr. Andrew Garruto, with the law firm of Garruto & Calabria, regarding a vehicle accident I was injured in. Throughout my legal case, Mr. Garruto exemplified excellent communication, research and professional skills. His analytical and attention to every detail were evident. Mr. Garruto listened to my concerns and answered all my questions with ease and understanding. Mr. Garruto continually kept me abreast of all developments. His professionalism is outstanding. His office staff was knowledgeable, compassionate and helpful. I was very pleased with the outcome of my case, and would employ Mr. Garruto in the future
See all reviews

Mr. Garruto is an outstanding personal injury attorney. I have had the pleasure of knowing him for years and can say, without a doubt, that he is an ethical attorney, zealous advocate and compassionate practitioner. I, unequivocally, recommend him.

I have worked with Andy on many occasions and feel he is one of the most diligent, compassionate and intelligent members of the legal profession I have come across. He is worthy of being most highly endorsed both as a lawyer and, more importantly, as a person.

I have worked with Andy on many occasions and feel he is one of the most diligent, compassionate and intelligent members of the legal profession I have come across. He is worthy of being most highly endorsed both as a lawyer and, more importantly, as a person.

I endorse this lawyer. i have sent him many liability cases which have culminated in excellent results.

I endorse this lawyer. I worked for Andy a number of years ago. He is among the most honorable and ethical attorneys with whom I have been associated. He possesses a great understanding of the law, and advocates tirelessly on behalf of his clients.

I endorse this lawyer. Andrew is an outstanding and well-known trial lawyer.

Mr. Garruto is an outstanding personal injury attorney. I have had the pleasure of knowing him for years and can say, without a doubt, that he is an ethical attorney, zealous advocate and compassionate practitioner. I, unequivocally, recommend him.

I endorse this lawyer. Andrew is a extremely experienced, highly respected and dedicated attorney. He truly cares about his clients and is caring advocate. I highly recommend him.

I endorse Andrew. He is a talented advocate with outstanding work ethic.

I endorse this lawyer. Mr. Garruto is a honest and reputable lawyer. I highly recommend him.