My firm handles a wide variety of legal matters and we are available 24 hours a day, 7 days a week.

I have handled cases that have resulted in multi-million dollar settlements. I have appeared in The Newark Star Ledger, the Courier News, and the Bergen Record among others. I practice in the Superior Court of New Jersey in both the trial court section and the appellate divisions, the Workers’ Compensation Court, and Municipal Courts. 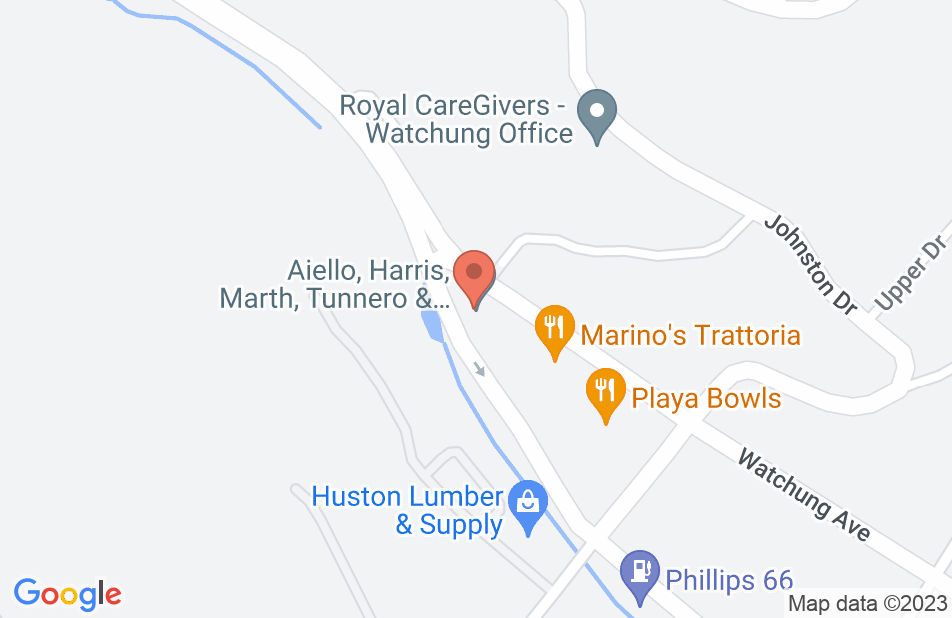 Chris is an outstanding attorney! He is diligent, hard working, and persistent to win his cases. I would highly recommend Mr. Aiello and his firm Aiello Harris.

Chris Aiello is everything his impressive bio reads -- and more. With his background as a prosecutor, and his hard-earned reputation for excellence, he is able to navigate through the legal process with dignity and respect -- and get the best possible results for his clients. I was facing a very serious charge that would have impacted my earning potential for the foreseeable future. Chris believed in me, and my case. He fought for me, pleaded my case, and charges were dismissed. Chris is a partner in Aiello, Harris, Marth, Tunnero, Pastor & Schiffman, P.C. that has 16+ attorneys of all disciplines - which was very helpful in the various nuances of my particular case. Attorney Aiello has my highest recommendation ,and gratitude.

Chris is an exceptional lawyer, I am very pleased with his services! He is very knowledgeable about NJ traffic Law and was able to reduce my ticket to be NO points and only a small fine. Also, his office staff was very responsive and on top of everything. Thanks again for all your help!!
This review is from a person who hired this attorney.
Hired attorney

Chris fought our case, and we had very little chance of any success due to our circumstances. His persuasive skills worked magic, and the sentence went from 12 months possibility to 3 months. He knows the laws very well, is responsive and responsible, and truly cares about his clients. Our family is very thankful for his services.
This review is from a person who hired this attorney.
Hired attorney

Christopher Aiello is the best attorney I have encountered or seen . I hired him to represent me In a case were jail time was mandatory. He negotiated a deal that I would not have dreamed. No jail time and all the tickets were dismissed and reduced. I cant believe that any other attorney could have done more for my case!!!
This review is from a person who hired this attorney.
Hired attorney

Great experience. I was very pleased with the outcome. I received two traffic tickets with 6 points. With minimum involvement from my side, I was out of court room in 20 mins with 1 ticket dismissed and no point.
This review is from a person who hired this attorney.
Hired attorney

I would highly recommend Chris Aiello and his firm if you are looking for someone who is honest, knowledgeable and passionate in the field of law. Chris was always professional and I had a very positive experience.
This review is from a person who hired this attorney.
Hired attorney

Favorite lawyer helped me and my family with all my cases and I wouldn’t be happier. If ever need in a lawyer go to him!
This review is from a person who hired this attorney.
Hired attorney

Great and positive experience! Chris worked with me through my case and kept my best interest in mind. I would highly recommend the Aiello, Harris, Martin, Tunnero & Schiffman firm for anyone seeking legal representation!
This review is from a person who hired this attorney.
Hired attorney

I was pulled over and arrested in Hillsborough on Memorial Day for a possession charge. I researched lawyers in the area and called Chris Aiello to meet with him regarding my situation. Mr. Aiello answered his phone early in the morning and agreed to meet with me even though his office was closed for the holiday. I was so grateful that he carved out time to open his office on his day off. This would be the precursor to how amazing my experience would be working with him. Mr. Aiello sat down with me and listened to all the events leading up to my arrest and immediately mapped out an action plan to help me build my character in front of the court. After following his advice of attending counseling sessions, support groups, and collecting character references, I not only had all the charges dismissed, the judge even commended me on all my hard work and told me to keep it up. Mr. Aiello entered the court with complete confidence walked me through what to do and say when it was my turn to stand in front of the judge. When presenting my case to the judge, he spoke with respect and summarized all the events I’ve done to improve myself as a person since the arrest. Without having Mr. Aiello guide me and be there as a resource, I don’t think I would have had the same results. I can’t thank him enough for all his help.
This review is from a person who hired this attorney.
Hired attorney
See all reviews

I highly endorse this lawyer. Chris would appear often in courts where I was the prosecutor. Chris was always fully prepared, very knowledgeable and persuasive in defending his clients. Chris is a top notch lawyer and one of the best in DWI defense , traffic violations and criminal matters.

I endorse this lawyer. Chris has an excellent reputation in the legal community.

I strongly endorse Christopher. Highly respected in the legal community with an outstanding reputation for client advocacy and dedication.

I endorse this lawyer with no reservation. An extremely talented and well respected attorney in the legal community. Very hardworking and diligent. Consistently achieves superior results. Advice is always practical and on point. I recommend to anyone looking for an attorney who knows the law and truly cares about protecting the rights of clients and achieving the most favorable result possible. I endorse this lawyer.

I endorse this lawyer. His analytical skills and understanding of his cases is extraordinary. He is especially adept at resolving cases through mediations getting his clients great results!

Christopher is an excellent advocate for his clients. I highly recommend him.

I endorse this lawyer. I have known Chris for 30 years and can vouch for his competence, skill and high ethical standards.