Loren has always had a passion for helping people. For the last 20 years his practice has emphasized helping injured people and fighting insurance companies.

Loren has been in practice since 1980

In 1982 Loren moved to Vancouver to join the firm of a law school friend. Loren served as a partner in this firm until June 2006 when he opened his own practice.

In September 2008 Mr. Etengoff was elected the new governor from the third congressional district of the Washington State Bar Association (WSBA). The WSBA is part of the judicial branch, exercising a governmental function authorized by the Washington State Supreme Court to license the state's 32,600 lawyers. The WSBA both regulates lawyers under the authority of the Court and serves its members as a professional association --- all without public funding.

Loren is also a member of the Association of Trial Lawyers of America, Washington State Bar

Involved in the Community

Loren lives in the Vancouver area with his wife, and children. He is very involved in the community. He is a past board member of the Evergreen School District Foundation.

He loves to play soccer, and has for years managed and coached both youth and adult soccer teams, while serving on the board of the Evergreen Soccer Club, and Clark County Youth Soccer Federation. 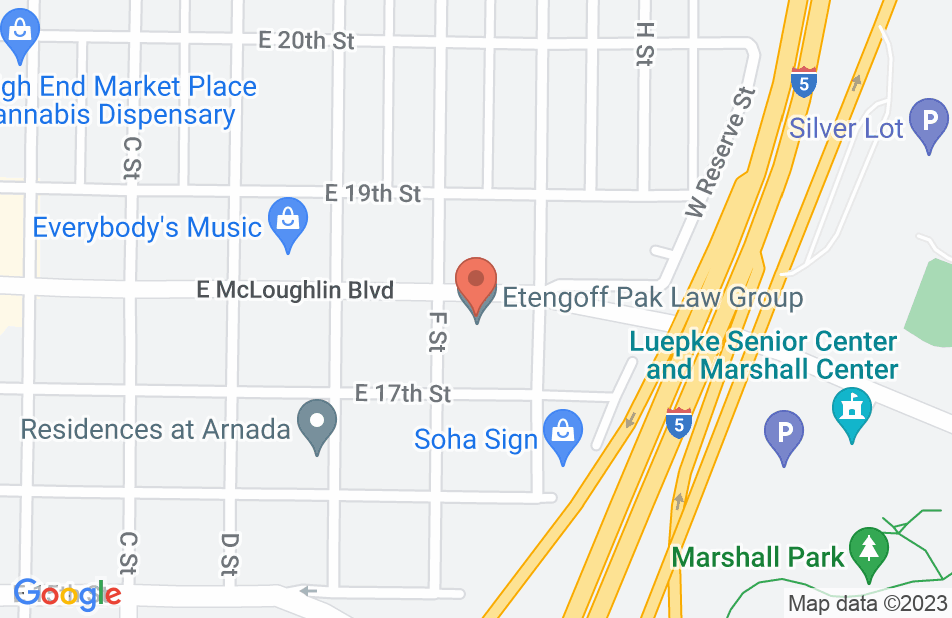 Loren Etengoff helped my daughter through a back injury sustained by a car that rear-ended her truck. He was there every step of the way; informing her of the progress and making sure she was as fully-recovered as possible before settling the case. She received enough money to compensate for medical expenses and time off work. I highly recommend Loren for his thoroughness and kindness.

I went to Loren Ettengoff's office after being involved in a auto accident in which I was rear ended. Loren took on my case and immediately began working diligently toward a settlement for my husband and I. Loren kept me up to date and was very sincere and professional with just the right amount of edge to get the job done well. I trusted him and his associates and whoever he brought in on my case. He was very personable, sincere and kind. I highly recommend his services to anyone. He will surely put 110% into your case and what is helpful for you.

Most competent and compassionate attorney I've ever met.

My husband was in a near fatal wreck and Loren came to the hospital so that he could sign Power of Attorney. In one of the worst living nightmares of my life, I could not focus on a single thing and Loren took care of all the details. When my husband got home from after care, Loren came to our house to take care of more paperwork. If I ever need an attorney again, Loren is the only one I'll ever trust. I recommend his office to everyone.

Hi my name is Serge. I got in to a very serious car accident, i had some problems regarding health wise, i took one lawyer that told me two weeks after the accident that i wont be left with anything and might be in dept. Luckily i met one off the doctors that recommended Loren Etengoff that took my case, in two months the case is well settled and im really happy with what he has offered and the results i have got. I strongly recommend Loren Etengoff to every one that is in a need of a lawyer. Good Luck!!!

Excellent attorney. I endorse this lawyer.

I endorse this lawyer. I have known Loren for 24 years, initially as an adverse attorney when I represented insurance companies. I respected and appreciated Loren's skill and hardwork then, and I am even more impressed now that I am representing those injured as a result of others' negligence. I have learned from Loren, especially in the areas of efficiency and client communication at which he excels. I do not hesitate to refer clients to him when I am in a position that I cannot represent a client. He is clearly one of the top attorneys in Clark County.

Loren is one of the most efficient lawyers I know. He gets great results for his clients and is highly regarded in the legal community.

Loren Etengoff is a very diligent and smart attorney. He is very effective in handling personal injury cases of all types, whether at the level of settling with the insurance companies or in pursuing the matter in courts. We have both worked in this field of law in Vancouver for many years, and my firm frequently refer cases to him when we have a conflict on a case.

Loren is an excellent attorney and runs a very efficient and effective office with a loyal and dedicated staff.