Stephen (Steve) Dixon is the founder of Steve Dixon Law in Las Vegas, Nevada.  Steve was born and raised in Las Vegas and is proud to still be a part of that community.  Vegas is home.  As a youth, Steve was twice named the Las Vegas valley's "high school basketball player of the week" by a prominent local newspaper while at Clark High School.  He was also a multiple time all district selection, and an all-state selection in that same sport.Following high school, Steve played basketball at the collegiate level where he continued to develop what he likes to call his "professional competitive" nature.  Following his collegiate career, Steve also coached at the highest levels in college basketball, including coaching in the NCAA field of 64 national tournament at the NCAA Division II level.Steve uses this professional competitive background to help his clients and fight for their best interests.  Steve has a very diverse background in the law.  That background includes working for insurance companies on personal injury matters.  This experience gives him a decided advantage while representing injured clients.  He also has vast experience in estate planning, family law, real estate, HOA community associations, and other areas of the law.  Mr. Dixon has also successfully represented a wide range of clients, including business owners, general contractors, land owners, developers, and lenders in both simple and complex litigation matters.Steve is very goal and detail oriented.  He earned his J.D., after serving on the Moot Court Board, from Creighton School of Law in Omaha, Nebraska in 2006.  He also earned his B.A. in International Studies from Idaho State University in 2003. Steve is also a legal education lecturer and performs a large amount of volunteer work in the community via the Boy Scouts of America.  He also coaches little league baseball, soccer, flag football, and basketball.  As stated above, Steve is a lifelong resident of Las Vegas and is proud of his Nevada heritage, one that stretches back to the early 1930's when his great-grandfather was a cement foreman on the Boulder (“Hoover”) Dam project.In his spare time, Steve enjoys exercising (he recently completed his first marathon), fishing, golfing, and spending as much time as he can with his wife and children. Steve is also fluent in Portuguese. 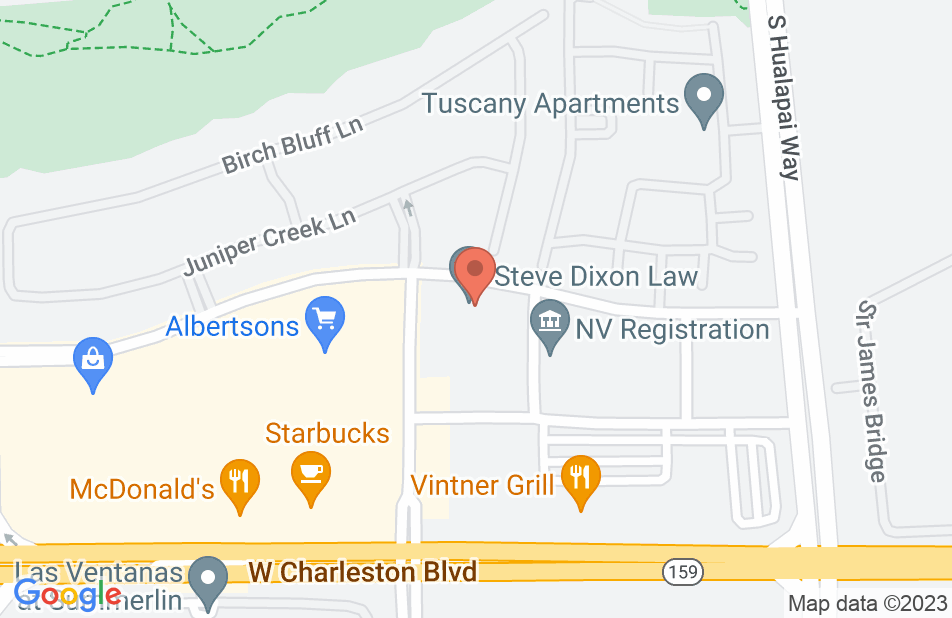 Deed for transfer of property

I originally thought I could do this myself. It was supposed to be a straight forward process. It soon became apparent that I needed help. Stephen Dixon was very responsive and helpful. He helped us in a timely and professional manner. I highly recommend Steve Dixon.
This review is from a person who hired this attorney.
Hired attorney

I am a Utah resident. While driving through Nevada, I was cited for a moving violation. I contacted Steve Dixon for representation, and he was able to negotiate a lower fine and while having the charge reduced to a non-moving violation (i.e., this means my insurance rates wouldn't go up, I didn't have to worry about points on my driving record, etc.). He was very patient and always kept me informed regarding the status of my case. Though my situation didn't carry dire legal consequences, I still feel that Steve made my case a priority and treated it with the utmost attention and care. I do not hesitate to recommend Steve to anyone else seeking legal representation.
This review is from a person who hired this attorney.
Hired attorney

In need of a Trust

I would definitely recommend using the Steve Dixon Law Firm. I consulted with, and hired Steve to prepare a trust for my family. He was very professional at explaining how trusts work & what is required for the different Powers of Attorney available. He takes time to listen, and any questions we had, he either knew the answer or he found out and contacted us soon after. The Document Recording service he offered was very helpful & such a time saver for me. I have a lot of confidence in him and would no doubt consult with him again in the future.
This review is from a person who hired this attorney.
Hired attorney

He's got your back!

Not sure what to expect in my case, Steve was always strait to the point with his professional opinion and patience as i sorted through my emotions to make a "logical" decision. I was always happy with his efficiency and care. Thankful to have him in my corner!
This review is from a person who hired this attorney.
Hired attorney

Steve was an incredible attorney. I would definitely recommend using him. We had to sue our insurance company for denying a claim that was clearly covered by our policy. He was amazing at explaining the pros and cons of how this would go before we moved forward. He was very upfront about any legal fees and kept us very informed with normal updates on where we were with the case. He got it settled in a timely fashion. My wife and I are very pleased with his services. We know he does more than just injury cases and definitely plan on using him for any future needs.
This review is from a person who hired this attorney.
Hired attorney

Stephen answered on the first call and met with us within 24 hours. His follow up and follow thru gave us peace of mind.
This review is from a person who hired this attorney.
Hired attorney

Back in March of 2018 my family and I were rear-ended by someone who wasn't paying attention. Being relatively new to Las Vegas, we had no clue who to turn to or who to trust. We had looked at reviews for numerous lawyers and came across Mr. Dixon. We had our initial consult with him and decided on the spot to hire him. My family and I are very glad we did. Mr. Dixon went above and beyond for us and exceeded our expectations. He kept us informed and up to date on the latest with our case. Any questions we had, he either knew the answer or he found out and contacted us within a timely manner. Any issues that arose, Mr. Dixon was there to lead the way. It was because of him that we got our case and everything related to that dealt with and settled quickly. My wife and I highly recommend Mr. Dixon to anyone that is looking for a trustworthy and reliable lawyer.
This review is from a person who hired this attorney.
Hired attorney

Steve Dixon was incredibly hard working and quick. I was in a motorcycle accident where I was rear ended at a red light. He was always readily available and took care of everything. He worked with the clinic I received care at and spoke with both insurance companies all behind the scenes. He got me a great settlement in less than 2 months and made everything very easy.
This review is from a person who hired this attorney.
Hired attorney

I am so glad I chose Mr Dixon to represent me in my minor accident. He took all the pressure off of me and got a fair settlement.
This review is from a person who hired this attorney.
Hired attorney

I consulted with, and hired Steve Dixon to prepare a trust and give direction in handling an inheritance trust. Steve was knowledgeable and asked a lot of questions that helped me plan the trust document with more understanding and foresight. This is someone who will take his time to fully understand your circumstance. He is a professional who will put his client’s interests first and is not afraid to go to battle for them. Ethical and smart!
This review is from a person who hired this attorney.
Hired attorney
See all reviews

Steven Dixon is a highly driven and compassionate attorney with a fantastic reputation in the community. I highly recommend Steve and trust his skill and experience.

Steve and I have worked together on a number of cases over the years. He is an exceptionally gifted litigator. I endorse this lawyer.

Steve has proven time and time again that he will aggressively fight for his clients. He is well-versed in the law and uses this to his clients' advantages. He does all this while maintaining the highest levels of ethics.

Having worked both with and against Steve, I can say he is a fantastic lawyer. Part of what makes him great is his attention to detail and his relationship with his clients.

I endorse this lawyer. Steve is a good lawyer and takes an interest in his clients.

I endorse this lawyer. Stephen takes an honest approach to his clients' cases and really cares about their best interests.

Steve is a strong litigator and a passionate advocate with a keen eye for details. He gives each client and each case his best efforts.

I endorse this lawyer. Steve has a good head on his shoulders and is skilled in a number of different practice areas. He's a hard fighter who gives his best effort for the client.

Stephen is a very knowledgeable lawyer when it comes to personal injury law. He has worked for some of the best defense lawyers and knows how to work with insurance companies to maximize recovery. I recommend him highly.

Steve is a humble yet highly effective and competent attorney. He understands his clients' needs and fights for them to get results.

Steve Dixon is an experienced slip and fall attorney in Las Vegas. Steve goes the extra mile for his clients. I recommend Steve's services.

Having the opportunity to work with Steve for a number of years, I witnessed first hand the care and commitment he gives to each case. He provides the best legal advice to and for his clients and their needs. He provides representation in a tough but fair manner with excellent preparation and knowledge of the law.

Steve is well respected in the Las Vegas legal community. He has a reputation for being a knowledgeable litigator, and takes the time necessary to understand the facts and law concerning each individual matter . I would recommend him to anyone needing legal representation.

Steve is an experienced and capable litigator. He’s smart, quick on his feet, and doesn’t back down from a challenge. I’m confident in his legal ability and strongly endorse him.