Jay began his legal career as in-house counsel with HealthTrans, a Colorado owned national healthcare service and IT company. While at HealthTrans, he negotiated and drafted contracts, assisted with due diligence, settled disputes, and served as a legal advisor to internal clients in various other matters. In 2012 HealthTrans was acquired by Catamaran where Jay continued to assist as legal counsel where, in addition to the above, Jay directed the Non-Disclosure Agreement, and Freedom of Information Act Protection processes, assisted in conducting due diligence on multiple targets, and assisted in resolving litigation and disputes. Jay was distinguished as a Make a Difference Award recipient for his contributions to Catamaran in 2013.

In July 2014 Jay joined the law firm of Pickard & Ross, P.C. in Littleton focusing on transactional law including the areas of contracts, corporate, business transactions, real estate, wills, trusts and estate planning, but is also engaged with the firm's practice of family law particularly those cases involving complex financial circumstances. 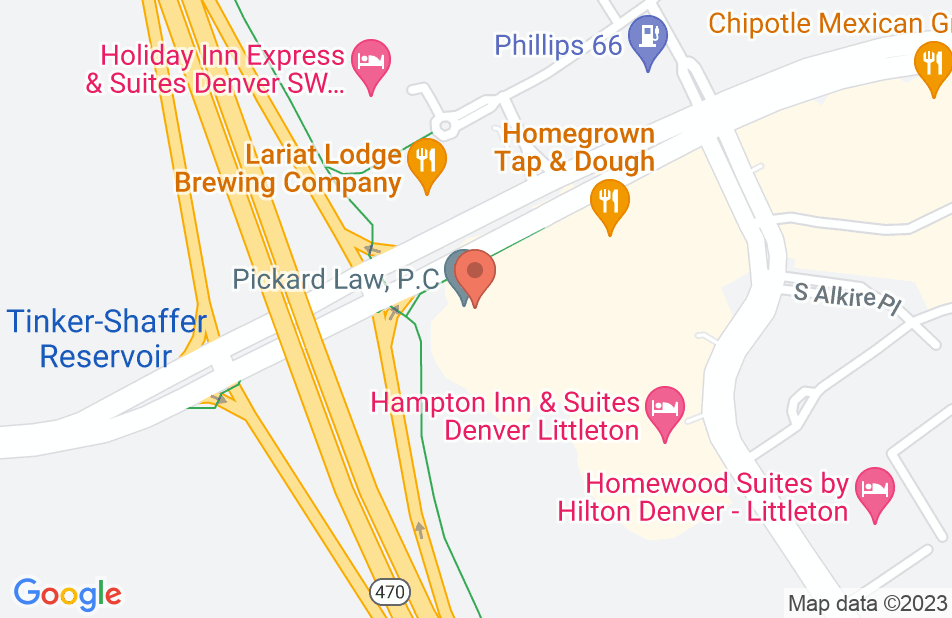 I hired Jay Pickard to provide me with a living will. He was very prompt, knowledgeable, ethical, and empathetic. His staff did a quality job as well and he put in the extra time and effort to address our concerns and the nuances of our case. I would highly recommend him to anyone looking for services in his areas of practice.
This review is from a person who hired this attorney.
Hired attorney

Jay was a true professional from the start of our relationship. I had unfortunately been through 3 different Attorney's previously for a child support case before meeting Jay Pickard. Jay and his staff accomplished more in 3 months than the other Attorney's did in 3 years. At Pickard & Ross they will tell you upfront if you have any legal remedies for your personal situation and will be honest with you about your case. I will never go to anyone else for any of my legal needs Jay and Pickard & Ross have a client for life!
This review is from a person who hired this attorney.
Hired attorney
See all reviews

Jay is helpful, knowledgeable, and caring. He is an excellent attorney who is well-liked by his clients and well-respected by his peers.

Jay has years of experience in general business law, including corporate law issues and contracts. He is thoughtful, precise and knowledgeable of the law. He has helped a variety of clients in many different circumstances and is committed to helping people.

I endorse this lawyer. Jay has worked for multi-billion dollar companies as in house counsel, and has a strong background in business and contracts.

It is my pleasure to give Jay Pickard my complete endorsement for purposes of estate planning, business planning, transactions, probate and litigation having to do with any of those areas. I have had the privilege of having known Jay for many years. First, as an outstanding law student, then as an outstanding corporate attorney for a large corporation, and, finally, as my colleague. Jay is creative, intelligent, and cares deeply about his clients. I have no hesitation in recommending Jay to anyone seeking one of the broad services that he offers.