CRIMINAL CASES ONLY. Let us take the pressure off of you. Your future is our business.

YOUR FUTURE IS OUR BUSINESS. The Wyatt Law Office in Oklahoma City provides legal advice and representation in criminal investigations, plea negotiations, trials and appeals in state and federal courts. We are ready to represent you.

We use only experienced attorneys in our firm and our practice is generally limited to criminal defense law; therefore, you can trust the advice of your Oklahoma Criminal Defense Lawyers. When you, a family member or a friend are under investigation or have been arrested, YOUR NEED SOMEONE WHO WILL DEFEND YOU--someone who is not afraid of the Government or the State--someone who is willing to go to trial--someone who wins jury trials. That has been the Wyatt's objective since 1989.

Wyatt's attention to detail and his successes have earned a listing for criminal defense in the prestigious publications The Best Lawyers in America, Oklahoma Super Lawyers, and the U.S. News & World Report "Best Law Firms" as a Tier 1 Law Firm. In 2019 & 2020, Super Lawyers named Bob Wyatt as one of the TOP 50 LAWYERS IN OKLAHOMA. Wyatt has also been recognized for three consecutive years by Best Lawyers as the LAWYER OF THE YEAR for OKC Criminal Defense WHITE COLLAR (2014, 2017, 2021) and for OKC Criminal Defense GENERAL PRACTICE (2013, 2015, 2020)  The  Oklahoma Criminal Defense Lawyer's Association recoginized him in 2003 as a "Champion of Liberty" and again in 2014 for his contributions to the OCDLA.  He is currently the OCDLA's President. and previously served as VP for 10 years.  Wyatt was recognized in 2015 by the Oklahoma National Memorial & Museum as one of the REFLECTIONS OF HOPE AWARD winners for his work seeking justice.  Both Bob Wyatt and the Wyatt Law Office have been AV Peer Review Rated (5 of 5 stars) by Martindale Hubbell Law Directory since 1998.

Because of his experience in the defense of cyber crimes, Mr. Wyatt was interviewed by the National Law Journal in February 18, 2008. Mr. Wyatt or his cases have been the subject of several books including: S. Jones & P. Israel 's, OTHERS UNKNOWN: The Oklahoma City Bombing Case and Conspriacy; J. Kelly & P. Wearne's, TAINTING EVIDENCE: Inside the Scandals at the FBI Crime Lab; and H. Silverglate's, THREE FELONIES A DAY.  Bob Wyatt is also a frequent Continuing Legal Education speaker for various law groups in Oklahoma.

We look forward to discussing your criminal case and to representing you in state or federal courts throughout Oklahoma. We are willing to travel to other federal jurisdictions nationwide and will consider representing you in other states if the court rules for your state will accept Oklahoma Bar Association credentials for a limited case. Call (405) 234-5500 to schedule an appointment or visit our web page at http://www.wyattlaw.com. 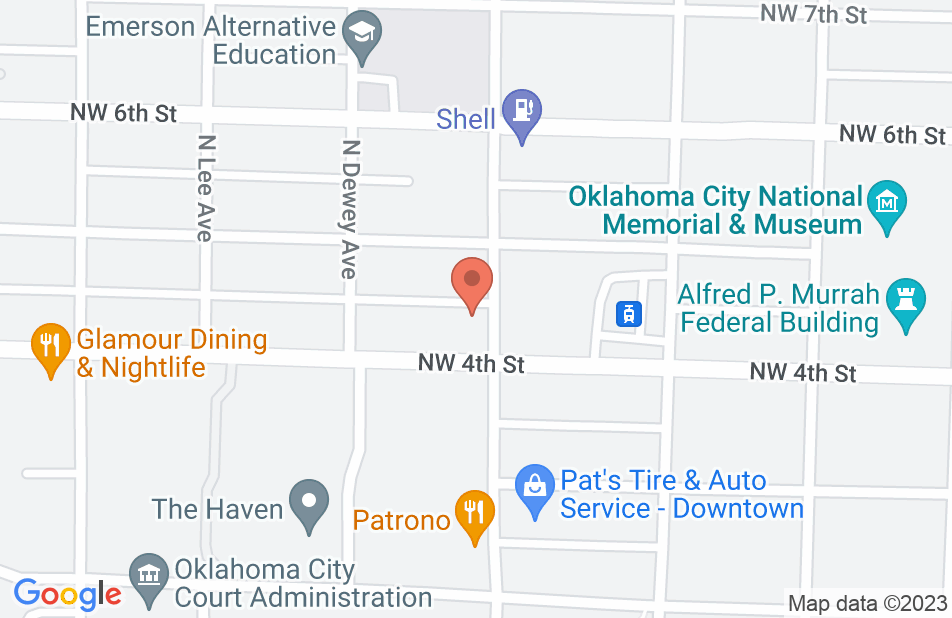 Mr Wyatt and his staff were great. They are always available and will to answer questions or concerns any time day or night. Mr Wyatt has your best interest at heart when advising you. We were blessed to have come across him in our time of need. We not only felt like an important client but a life long friend. He made the process a little easier than it could have been!
This review is from a person who hired this attorney.
Hired attorney

I am a former police officer who has spent thousands of hours in the court system. I have seen both sides from prosecutors and defense attorney's. Bob Wyatt is hands down the most caring, loyal, BEST defense lawyer I have ever seen. From finding case law, reviewing discovery and meeting with you so you are on the same page. I sat next to Bob for more than 3 weeks in a criminal trial and he destroyed the government allegations and witnesses. I don't just write this because I have nothing to do, he is truly a great attorney who cares. Jeff
This review is from a person who hired this attorney.
Hired attorney

Best lawyer ever, hands down.

One of Mr. Wyatt's best qualities is his honesty. He was honest with me up front and told me what was the probable outcome, but after all his hard work he was able to get a considerably lenient sentence for me. Throughout the entire process Mr. Wyatt had my best interests at heart. He answered all of my questions whenever I called with the truth.
This review is from a person who hired this attorney.
Hired attorney

Bob and his staff provided a valuable service to our family at a traumatic time for all of us. Our family member had some serious charges filed against him. Bob was completely honest on what could happen to him with the charges against him and he made no promises other than he would represent our family member to the best of his abilities. It did not take long in our initial meeting to realize that we had found the right person for the job. Bob and his staff were very impressive and he never forced any decisions on our family member but rather laid out the facts and allowed us time to discuss all of the options before any actions were taken. Bob and his staff are very professional and extremely knowledgeable with the law. They showed much empathy for our family member and their integrity and ethics are beyond approach. Bob turned out to be more than just an Attorney we hired, but a true representative for our family in a very trying situation.
This review is from a person who hired this attorney.
Hired attorney

Bob and his staff handled my case in a professional manor. He was kind and courteous. I would highly recommend him.
This review is from a person who hired this attorney.
Hired attorney

Powerful talent and a heart of pure gold.

God forbid you find yourself on the wrong side of a serious criminal accusation.. but I did. And I had no clue what to do or who to call. By a shear gift from God I made a phone call to Mr. Wyatt. Within 10 minutes of meeting at his office I was blown away by his confidence and interest in every detail. He was so calming. Over the next year of my life this man worked diligently to clear my name, which he did - at multiple court levels and all the way to the highest court in the state. The bottom line is he is respected by his peers and by judges - for good reason. His command of the law and making oral arguments is just simply a God given talent. You can just see how impressed everyone in the courtroom is when he makes a statement. In addition to his legal ability he's just a kind and genuinely caring guy. I felt at the time (and now know) that he took a personal interest in me. It's just who he is. I'm forever thankful for that and I would absolutely highly recommend him.
This review is from a person who hired this attorney.
Hired attorney

Bob Wyatt represented my son in a complex multiple crime, multiple counties case and we feel there is no one out there that could have done a better job, in my sons words he is awesome!!!. When we found Bob I was really stressed and had not slept in days for the fear of what my only son was facing and Bob was completely honest on what could happen to him for the charges against him and he made no promises other than he would represent him to the best of his abilities but after an hour or so initial meeting I felt we found the right person for the job. He is proffessional knowledgable and has empathy for his clients and his integrity and ethics are beyond approach. Bob turned out to be more than just an Attorney we hired, he was more of a mentor and friend not just for my son but for me and my whole family. His relentless determination and dedication to represent my son was very impressive and he never forced any decisions on him but rather laid out the facts and allowed us time to discuss all of his options before any actions were taken. We are extremely happy with the results from Bob's hard work and I would say that Bob has been a positive influence on my son and I feel he will make it through all this okay mainly because he wants to be a better person and also does not want to let Bob down. I thank the Lord for leading us to Bob and I would and have strongly recommend his services to all my friends. Thank you Bob and God Bless You for getting us through this very difficult ordeal.

Bob Wyatt is a lawyer's lawyer. He is skilled in the courtroom and elegant on paper. Bob is the consummate professional who is respected by all sides. I enthusiastically endorse this lawyer.

Mr. Wyatt works hard for his clients, and obtains excellent results, both in the courtroom and in negotiations. He has tons of experience defending people charged with a variety of crimes, and has been helpful to me in navigating the intricacies of the criminal system. I wholeheartedly endorse Mr. Wyatt in his practice of criminal defense.

Bob is an outstanding lawyer. He is one of the absolute best lawyers in Oklahoma. He is a zealous advocate and always works to achieve the best possible outcome for his clients. I would recommend him to family members and friends.

I endorse this lawyer. He conducts himself as a professional, he is respected in the profession, and you can expect honest guidance from him.

Bob Wyatt is a phenomenal lawyer. He is very well respected among the criminal defense bar, the prosecution, and the Court. I highly endorse him as a person and as a lawyer.