Richard W. James has a proven track record of success in obtaining maximum recoveries for his clients. Most cases never require a trial and we can force the insurance company to provide you a fair offer.  However, when they will not, we will fight for your until they do pay you for your injuries.

Richard has successfully tried cases in both State and Federal Courts. In order to obtain the maximum value for your injuries, the opponent must know that you are willing to take the case to trial. When you hire our firm they will know that refusing to pay you for your injuries will land them in front of a jury.

When the Wichita Public Schools were forced to bring lawsuits against certain contractors for faulty construction they chose to hire Richard as lead trial counsel. After a lengthy two year battle in litigation the defendants agreed to pay more than $2.4 million dollars in damages. In 2010, in a commercial litigation case, he obtained a verdict in the amount of $265,992.00 against an advertising firm. In this case, he was successful in obtaining a verdict that “pierced the corporate veil” and held the president of the company personally liable. Prior to trial, the defendant only offered $10,000.00 to settle the case.

In a case that concluded in 2010, Richard and Dustin tried a three week jury trial between two companies and obtained a verdict in excess of $1,000,000.00. Immediately prior to trial, the defendant offered nothing in settlement and asserted that no recovery would be obtained for their client. The defendants even appealed the case to the Tenth Circuit Court of Appeals in Denver, Colorado. The Tenth Circuit denied their appeal, entered judgment against the defendants and added additional attorney fees and expenses for the conduct of the defendants.

After preparing cases for trial and showing the opposition you will not settle for less than fair compensation for your injuries, most cases are settled without the need for a trial. However, you need to be sure your attorney is willing and able to take your case to the jury. In the last three years settlements were obtained for his clients in excess of five million dollars.* He is willing to take cases on a “no recovery, no fee” basis in order to allow all individuals access to the legal system. This minimizes the risk to his clients.

In 2012 and 2013 Richard was recognized in the National Trial Lawyers Top 100 Trial Lawyers. In 2009, 2010 and 2013 Richard was identified by Super Lawyers Magazine in Kansas City as a “Rising Star” in Kansas litigation. In 2009, he was selected by the Wichita Business Journal to its annual ’40 Under 40″ class selecting business leaders under the age of 40 who exhibited excellence in their profession. In 2005, he was chosen to participate in Leadership Wichita, a program conducted by the Wichita Chamber of Commerce to identify leaders who positively impact the Wichita Community.

Richard and his wife Rachel, have one daughter, Abbey and one son, Jackson, and are very active in the community and their local church. He serves on the Board of Directors of the Carpenter Place (formerly known as Maude Carpenter Children’s Home) in Wichita, as Chairman of the Church Finance Committee and as a Deacon at his church. 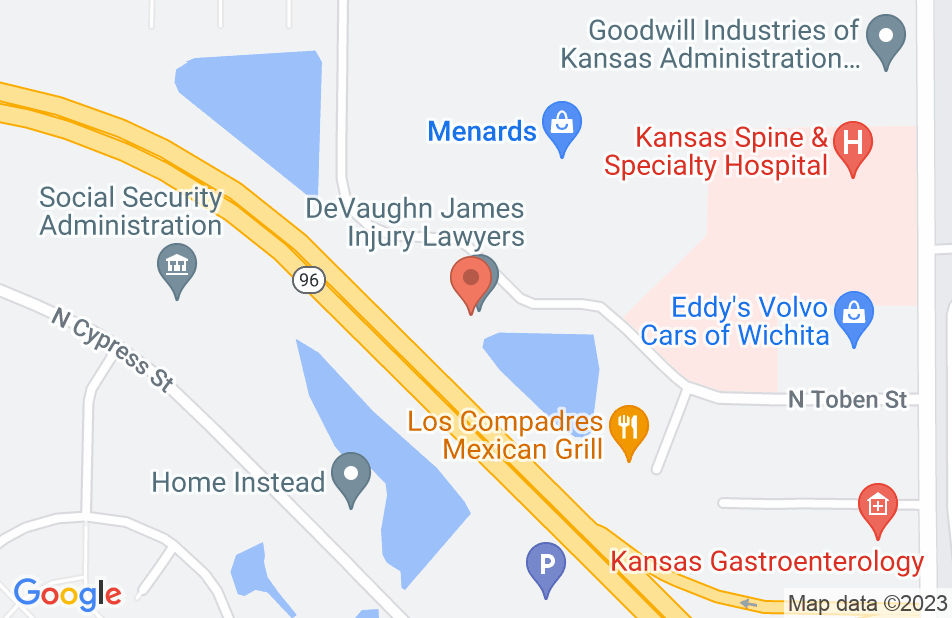 Richard and the rest of the staff at Devaughn-James are great people to work with. They gave me accurate expectations for the outcome of my case, explained the entire process in a way that was easy to understand, and gave good answers with quick responses to all of my questions. What I most appreciated is that his staff was very flexible to work with and easy to contact, both by phone & by email. They kept me well informed throughout the entire process, checked in with me periodically to ask how I was recovering from my injuries, and were patient with me in allowing me to balance my own personal & work life with getting them the paperwork from my doctors & everything else they needed from me to process my case. I would highly recommend this lawyer, and if I am ever in the position to need his services I would definitely work with him again.

I would highly recommend Richard @ Devaughn James for an attorney. ..he is very friendly, straight forward to the point...and most of all very supportive! He will take the time to explain each and every process along the way.Always makes time for his clients and if he is out of the office, he always has backup to answer any questions or concerns I might have.Good job!
See all reviews

I recently returned from a national legal seminar in which I had the pleasure to hear Richard speak on personal injury law. Richard and his firm are on the cutting edge of winning cases for their clients. Moreover, from speaking with Richard, I am impressed by his character - he is not only a fantastic lawyer, but also sincerely cares about his clients and his community.

Richard not only has a kind heart, he is an excellent attorney who cares about his clients. He is highly competent, skilled and intelligent! I endorse this lawyer.

A great firm. Richard gets the job done by delivering results to his clients. I endorse this lawyer.

I endorse this lawyer. Richard is a smart lawyer and will be honest with you. A professional and a great person.

Richard is more than a great attorney, he is a great person. Richard sets himself apart from other attorneys by his customer service, attention to detail and his compassion. He worked for many years defending insurance companies which gives him a unique set of skills unlike other attorneys. He's able to aggressively fight for injured people in a professional manner to achieve great results. You'll be extremely happy with Richard as your attorney.

Richard is an exceptional attorney and he works hard to win cases on behalf of his injured clients. His settlements are typically higher than those obtained by other attorneys -- a testament to his work ethic and desire to fairly compensate his clients. I highly recommend him.