Jesse V. Barrientes’ practice areas include Civil Litigation, Criminal Law, Personal Injury, Employment Discrimination, Bankruptcy, and a MAJOR concentration in Family Law.  His firm provides aggressive, experienced and quality legal services. He focuses on the equitable and financially feasible resolution of his clients’ legal situations. He does not believe in sugar-coating his advice, or telling clients what they want to hear. He believes that each client must be aware of the realities of their unique legal situation, and the ramifications of their various legal options in order to render an intelligent, informed, and reasoned decision. He also believes in keeping his clients informed of the status and progress of their case at each and every stage of litigation. 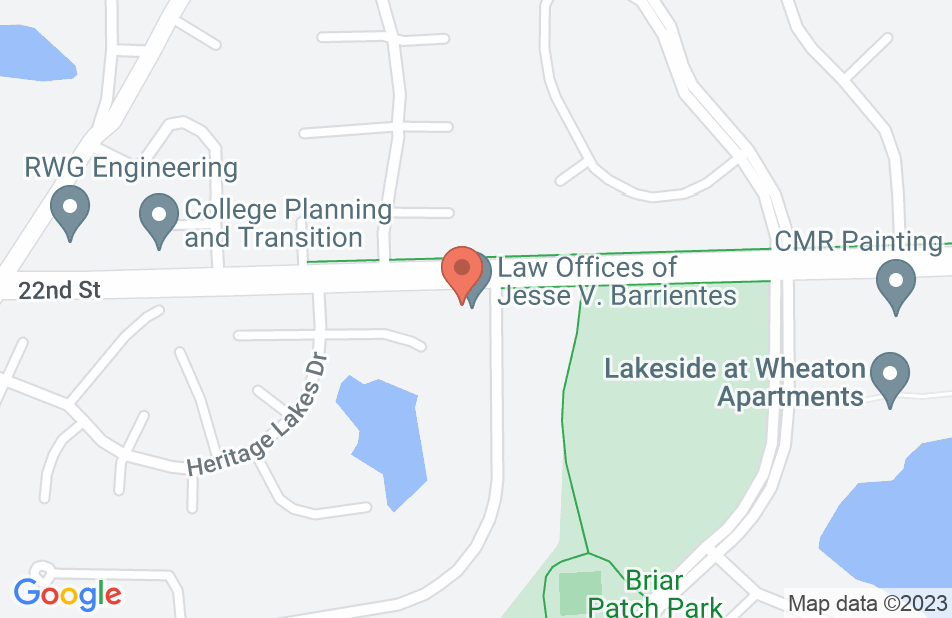 We have been represented for the last 20 years by our attorney Jesse Barrientes. In all types of legal situations , that the average family would inconture. Closings, Wills, POA’s , Accidents & injury etc. etc. We find him to be of the highest caliber & integrity.
This review is from a person who hired this attorney.
Hired attorney

My husband and I have used Jesse Barrientes for several Real Estate transactions, Wills and adoption. He is extremely knowledgeable, sharp, personable, thorough and very trustworthy. His advice throughout the 10 + years have been invaluable. Jesse Barrientes genuinely cares about his clients. *We highly recommend him*
This review is from a person who hired this attorney.
Hired attorney

Mr. Barrientes did phenomenal work on our family case. He is through, professional, and thoughtful. He did not lie nor sugar coat anything. He was honest and straight forward. He’s a hard worker and very knowledgeable. One of the things that stands out the most in our experience with him is that he truly cares and fights for what is right and best for the family.
This review is from a person who hired this attorney.
Hired attorney

Jesse Barrientes is an amazing lawyer. He is a proficient attorney and his attention to detail is remarkable. My family has used him for many years, and continue to use his legal expertise, to this day. We have used him for divorces, criminal defense, wills/probate and real estate. Jesse is great at returning phone calls, and handles all paper work in a, more than timely manner. You will not be disappointed in his legal abilities, and he will be by your side, fighting for you, until the very end. I highly recommend Jesse Barrientes for your legal needs. He does not disappoint!!!
This review is from a person who hired this attorney.
Hired attorney

I’ve used two other attorneys in the past so I have comparison. Mr. Barrientes has consulted/handled four issues for me, including child support, end of life planning and an employment concern. He is easy to talk to, listens and responds and he understands my concerns are important to me and treats them as such. When I’ve emailed concerns or left messages he replies. I don’t have to call/email several times. He was courteous and aggressive in my dispute. Without getting into too much detail, I thought I was heading towards a long dispute, Mr. Barrientes remembered an off handed comment I had made months earlier that I never realized could be used in my case. He researched it and my case was settled. Saved me much time and potentially a lot of money. I recommend Mr. Barrientes to everyone.
This review is from a person who hired this attorney.
Hired attorney

The services I have obtained from Jesse have been amazing. Jesse is extremly quick with returing phone calls and services with any questions i've had with him. I can't say enough how easy he has made my experience. He has been a very patient well mannered man and very easy to get along with. We can't forget he got what I WANTED DONE. Not just what he wanted. He listened and executed everytime. This is who you want to represent you. He makes me feel like im family. I recommend him very strongly and couldnt ask for more.
This review is from a person who hired this attorney.
Hired attorney

I would definetly recomend Jesse, he has been exceptional with the way he handled my divorce what's best it was quick and felt less stress about it. He is continuing to help my case even after divorce. Great lawyer. You will not be disappointed.
This review is from a person who hired this attorney.
Hired attorney

Michael Navarro, Divorce and separation Attorney on Apr 12, 2017
Relationship: Other

Jesse has extensive experience and knowledge in family law. I would highly recommend his legal services.

I endorse Jesse. He is a highly skilled attorney that is well respected in the legal community.

I’ve known Jesse for several years as opposing counsel on cases as well as a fellow lawyer in the community. He is an aggressive litigant for his clients, yet he is also a strong negotiator for reaching an equitable resolution. Jesse truly cares about doing the right thing for his clients and is well-respected in the legal community for doing so.