Michael J. Murphy was born on a U.S. Army base in Frankfort, Germany. Since returning to the U.S. mainland as a child, he has lived in Illinois for the majority of his life where he is currently a resident of Cary, IL, along with his wife and their two sons.

Since he began practicing law in 2000, Mr. Murphy has been an active member of the Illinois State Bar Association. He firmly believes in the importance of continuing legal education, and regularly participates in accredited programs regarding current legal trends and developments. In addition, Mr. Murphy periodically presents seminars on legal topics involving his areas of concentration. 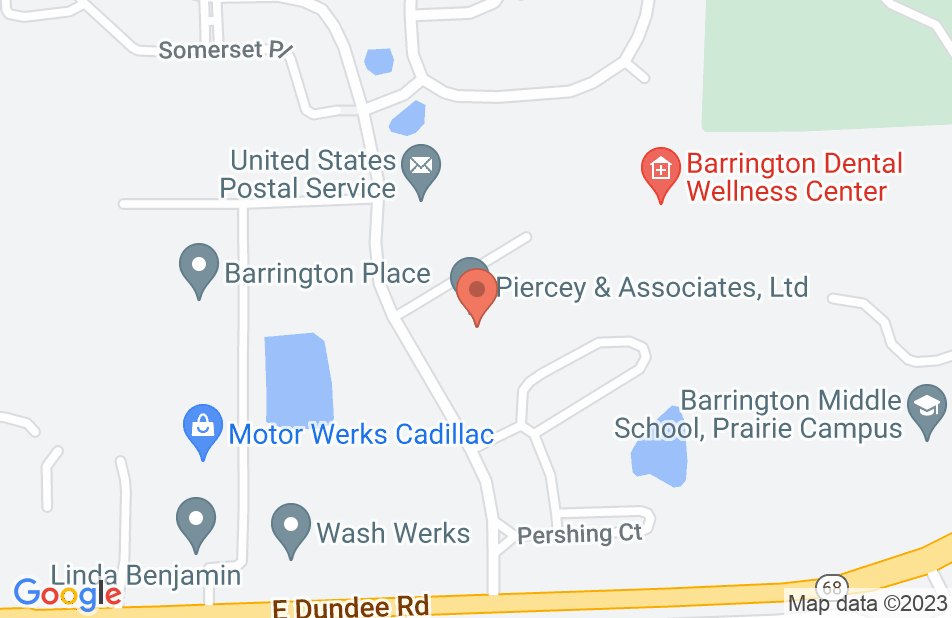 Michael and Stacy have handled 5 recent real estate transactions for me. Each one has gone perfectly and without a hitch. They are professional and personable beyond compare. Michael and Stacy go out of their ways to make the experience of buying and selling both personal and investment properties simple and straightforward.
This review is from a person who hired this attorney.
Hired attorney

I worked with Michael Murphy and his office recently at the closing of my property. Can’t say enough about how helpful they were in the whole process. Including Stacy who spent a tremendous amount of time and effort to make sure everything went through properly. Will highly recommend them to friends and family.
This review is from a person who hired this attorney.
Hired attorney

Michael Murphy of Piercey & Associates did an outstanding job of representing us purchasing property in Crystal Lake. His experience really made the process easy to understand and simple to process. Stacy, his Paralegal was fantastic! She was always available and quick to respond. I plan to use Piercey & Associates for all my future legal needs and highly recommend others to do as well.
This review is from a person who hired this attorney.
Hired attorney

Mr Murphay and Stacy have been God sent. I'm battling a disease and they took over everything to make sure to take any additional stress on me. They treated me like family. I highly recommend them!
This review is from a person who hired this attorney.
Hired attorney

Michael and his team were amazing during the sale of our old home and purchase of our new home. Every step of the way he was there for any needs and always had an answer. We would recommend him for any real estate transactions and would use his services again in the future.
This review is from a person who hired this attorney.
Hired attorney

Experience pays off. I worked with Michael and his staff on a closing about 30 days ago everything went as well as I could've expected very professional and thorough would highly recommend him for any law work needed to be done.
This review is from a person who hired this attorney.
Hired attorney

He is extremely knowledgeable and very down easy to work with. I would recommend him to anyone selling or buying a home hand's down. He made the sale and purchase process go smooth and answered every question we had and was always able to get ahold of via email and telephone.
This review is from a person who hired this attorney.
Hired attorney

I have worked with Mr. Michael Murphy on a number of real estate transactions over the years and my experience has always been positive. He is dedicated to providing the best services for his clients while maintaining his professionalism and creating win-win situations for everyone involved. I highly recommend Michael Murphy.

An attorney with a wealth of knowledge and great work ethic.

I heartily endorse Michael Murphy. I had the pleasure of working with Michael on a real estate deal this fall. His knowledge and professionalism were always present. We did experience one snafu, thanks to our clients, but, thanks in part to Michael's level headed approach, we were able to work through the problem and get the parties to the closing table on time. I look forward to working with Michael again.

I endorse Michael. We recently worked together concerning a real estate closing and his qualifications were evident. I would look forward to an opportunity to work with him again.

I endorse Michael J. Murphy. He is a fantastic Real Estate attorney.

I endorse this lawyer. Michael is an extremely competent attorney with plentiful experience that always looks out for the best interest of his clients.

I endorse Mr. Murphy for his diligence and sound legal advice.

I have had the pleasure of working on several real estate matters with Michael. Michael is a very knowledgeable attorney and makes the transaction smooth from start to finish. It is always great to see his name on the other side of a real estate contract!

Michael Murphy is an outstanding real estate lawyer that I have had the privilege to work with either as attorneys on the same projects or across the table for many years. He is highly detailed and knowledgeable in real estate matters, and uses technology to help is business and his clients. Because of my experience in dealing with Mike and seeing the quality of his work I am happy to recommend him to anyone looking for a real estate lawyer. Ted Lane

I have worked on several real estate transactions with Michael. He is an extremely knowledgeable real estate attorney. I appreciate and respect his knowledge and expertise.

I endorse this lawyer. Michael is extremely knowledgeable, detail oriented, and passionate about providing clients with thorough advice.

I've worked on countless transactions with Mr. Murphy. He clearly understands the complexities of todays market and is an excellent advocate for his clients.