We limit our practice to helping individuals and small businesses in financial distress - Call us!

I am as close to a Huntsville native as it gets, having moved to Huntsville with my family when I was 5 years old.  I attended Whitesburg Elementary & Middle School and Grissom High School graduating with the Class of 1979.  I attended the University of Alabama in Tuscaloosa for the last 4 years of Bear Bryant's coaching career (National Champions my Freshman Year) obtaining a B.A. Degree in Criminal Justice with a dual minor in Psychology and Sociology.

I attended the University Of Alabama School of Law from 1983-1986 obtaining my Juris Doctorate and getting licensed by the Alabama State Bar in 1986.  The last 4 months of 1986 I practiced in Fort Payne, Alabama with the Honorable Lee Clyde Traylor (later the Hon. JUDGE Lee Clyde Traylor).

January 1, 1987, I took a job as an Associate Attorney with Higgs & Conchin in Huntsville where I tried numerous lawsuits and became known nationwide as a Lemon Law Litigator.

I started a solo practice January 1, 1990, concentrating in Bankruptcy, Domestic Relations and Personal Injury Cases (The Alabama Legislature statutorily did away with my Lemon Law Practice by passing a State Lemon Law that superseded the more favorable Federal Magnusson-Moss Warranty Act).

After a short stint as a Partner at Higgs, Emerson & Dezenberg in 1993-1994, I started a practice limited to Consumer Bankruptcy Law in 1994.

In May of 2012, Melissa W. Larsen joined with me to form the Consumer Bankruptcy Law Firm of Dezenberg & Larsen, P.C..  We are committed to providing the best representation possible to consumers facing economic issues.

I have five children, three grown (ages 26, 22, and 19 - two having graduated from the University of Alabama and the third having finished her Sophomore Year)  and two "new ones" (ages 5 and 6).  I am married to the former Shiela Durano Abrogar since 2005.  I have one grandchild, age 1 1/2 named Cooper.

Active Law Practice leaves me little time for hobbies but I am a boxing fanatic trading fights with "fight traders" around the world.  I attend all of the University of Alabama Football home games and I respect anyone who names their offspring "Saban".

I stay current on Bankruptcy Law developments by attending the National Association Of Consumer Bankruptcy Attorneys Annual Conferences, having attended San Diego in 2013 and scheduled to attend New York in 2014. 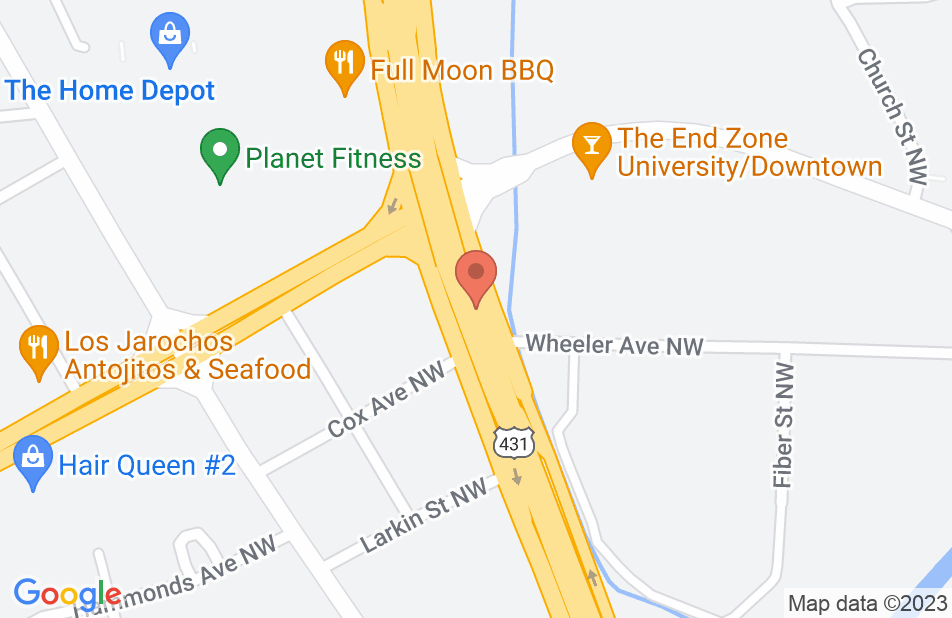 Always kept all appointments, really knows the legal process, was able to answer any questions I had, and performed the required work for the court on time. Most of all he performed the job for the agreed upon price.

He represented me twice, and both times the outcome was in my favor. Not only is he very competent, but he is always responsive and he really cares about his clients.

The best Bankruptcy lawyers in Huntsville bar none...

John and his staff were so helpful and non judgemental. The entire process was explained in detail. I was very reassured by his knowledge and compassion. I would definitely recommend Dezenburg & Smith to anyone who is in need of the services they offer.
This review is from a person who hired this attorney.
Hired attorney

He is very thorough with the best way to handle bankruptcy. What to do. What’s the best chapter .The whole staff has been trained by him I believe because they are very knowledgeable of the step by step process. I can’t recommend him enough.
This review is from a person who hired this attorney.
Hired attorney

He explained everything in great detail. He was very friendly. I got his referral from a family member. Looks like he is gonna save me some money. The interest was killing me and I needed to get a grasp on this. Looks like John can help me.
This review is from a person who hired this attorney.
Hired attorney

Brandon Smith was nice and very professional. And gave good advice. Warm welcome from the staff.
This review is from a potential client who consulted with this attorney.
Consulted attorney

Mr. Dezenberg made me feel at ease. He was very knowledgeable and explained everything to me. The office staff was very friendly and helpful as well. The fees are very reasonable. All of these reasons are why I chose Dezenberg & Smith to handle my bankruptcy.
This review is from a person who hired this attorney.
Hired attorney

Mr. Dezenberg was really helpful explaining to me my opinions and making me feel at ease. I went in the office feeling overwhelmed and like a complete failure and walked out feeling like I huge weight was lifted off my shoulders. He’s very professional, friendly, and knows what he is talking about.
This review is from a person who hired this attorney.
Hired attorney

George is calming in this stressful part of life. It's something I never wanted to do, but was necessary. He reads people well and is very helpful.
This review is from a person who hired this attorney.
Hired attorney
See all reviews

I endorse John. He is a leader in the legal community and a great advocate for his clients.

John is a caring and skilled lawyer. Bankruptcy is full of potholes and John is very knowledgeable in this complex area of the law.

I endorse this lawyer. Truly exceptional and professional attorney with an outstanding reputation in the legal field for providing high quality representation and results for his clients!

I have known John for many years. He is dedicated, hard working, and professional. He assists his clients in getting the best result possible in a difficult situation. I would recommend him to anyone who is considering bankruptcy.

John is one of the top consumer bankruptcy attorneys in North Alabama. He practices with a high level of knowledge, experience and professionalism. He is well respected among the lawyers and judges in our community. I highly recommend and endorse this lawyer.

This is a very good attorney and highly respected by peers in the community. I am happy to endorse him!

John goes above and beyond in looking out for his clients. He is very knowledgeable in his area of practice and works hard to be on the latest developments in bankruptcy law that can aid his clients.

Eric Artrip, Bankruptcy and debt Attorney on Jun 3, 2013
Relationship: Worked together on matter

John is one of the best bankruptcy attorneys in North Alabama. He is conscientious, knowledgeable and Really cares about his clients. I highly recommend him.

I endorse this lawyer. John is one of the top bankruptcy lawyers in North Alabama. He works hard to resolve his client's financial problems.

Russell Crumbley, Bankruptcy and debt Attorney on May 4, 2013
Relationship: Fellow lawyer in community

I endorse this lawyer. John is a "bucket of knowledge" with respect to bankruptcy. He knows his business. He gets results for his clients. And he readily shares the benefit of his experience and knowledge with the rest of us when we call for help. In the North Alabama legal arena, John is certainly one of my "go to" guys.

I endorse this lawyer. John is a very knowledgeable attorney who is always well prepared and works hard for his clients. His vast experience of the law makes him a powerful advocate for his clients.