Max Factor is an experienced attorney in Tallahassee ready to assist you with your legal needs.

Max Factor is a seasoned trial attorney who provides top-notch legal and consulting services to a broad range of clients including large companies, small businesses, governmental entities, not-for-profit entities, and individuals. He provides personal and detailed attention to each client’s case. Mr. Factor is licensed to practice in all state and federal courts within the State of Florida, State of Georgia, and the Eleventh Circuit Court of Appeals.

Mr. Factor attended LSU and graduated from Louisiana College in 1987. He graduated from Cumberland School of Law, at Samford University in 1991.  He devoted the first nine years of his career to prosecution. He then entered private practice with a large law firm where he gained experience in a broad spectrum of legal areas including insurance litigation, sinkhole, fire, arson, misrepresentation, windstorm and insurance fraud.  In addition, he has extensive experience in a wide range of other matters, including municipal liability, complex liability, employment law, extra contractual and first party coverage matters.  Throughout his career Mr. Factor has obtained considerable trial experience, including sixty-seven jury trials in Florida and Georgia.

Mr. Factor is a past president and currently serves as a member of the Florida Advisory Committee on Arson Prevention.  He has been certified by the Department of Insurance as an instructor for continuing education courses in several areas, including arson and insurance fraud.  Mr. Factor He now limits his practice to matters involving divorce, family law and employment.

The State Bar of Georgia 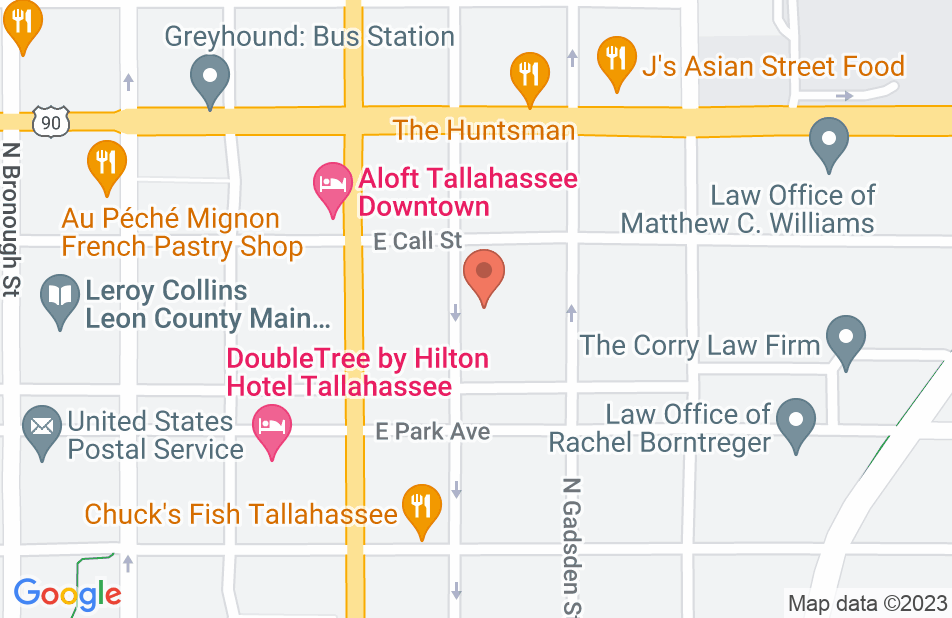 OUTSTANDING! Don't like lawyers much, but I had an issue that Factor was perfectly suited to handle. He did it for a reasonable price. Everything was done on time. Smart guy who really helped alot. Will use him again in the future.

Max has advised me on several occasions. He offered valuable opinions and advice that really addressed the issue at hand. He is knowledgeable, professional, and trustworthy. I would not hesitate to recommend him to anyone.

I’m extremely satisfied with Max Factor Law. They made me feel like I’m part of the family. They definitely made the process easier. I highly recommend them to anyone looking for quality representation.
This review is from a person who hired this attorney.
Hired attorney

Max Factor and associates are very pleasant and professional. Mrs. Sandie Hobbs is so nice and helpful and Mr. Eric Schab is also very nice and professional. All associates are very willing to go that extra mile for the clients. Everything was straight forward and anything that was unclear for me was explained so there were no surprises during the entire divorce process. Mr. Factor told me that “fair is fair and we will not settle for anything less”, truly a man of his word. Mr. factor is definetly the man for the job and I will obtain his services in the future if need be. Thank you to all at Max Factor Law.
This review is from a person who hired this attorney.
Hired attorney

Max and his team did a great job representing me, answered all questions, would recommend to any one in a similar situation.
This review is from a person who hired this attorney.
Hired attorney

My situation was very dire. I had spoke to a few attorney's and they all stated there was no hope for my case and then I met with Mr. Factor. He was the silver lining in the cloud. He reviewed my case and went to work. His office staff is top notch and very professional. Mr. Factor was very thorough and gave me straight answers. He explained the process each and every step of the way. By the end of my case, he had successfully resolved it and all parties were happy. Would highly recommend Mr. Factor to anyone needing a divorce attorney.
This review is from a person who hired this attorney.
Hired attorney

Mr. Factor and his staff are very friendly. Mr. Factor is worth every penny. He listened and was a calm lion in the courtroom. Very organized and knowledge of the law goes above and beyond.
This review is from a person who hired this attorney.
Hired attorney

Max Factor and his team are very professional individuals with immense amount of knowledge. But what sets Mr. Factor and his staff aside from the rest is how approachable they are. Mr. Factor is a very personable person that shows empathy for those going through hard times. He and his team made me feel like more than a client and that helped immensely throughout my process. He was always professional and well organized. His team were very quick to respond to any and all questions I had. Would recommend Mr. Factor to anyone and would most definitely contact again for any future concerns.
This review is from a person who hired this attorney.
Hired attorney

I am very happy with my choice of lawyers.

Mr. Factor helped to make a bad situation tolerable. He had wonderful advice and was timely with all of our dealings. I would use him in the future if I needed a lawyer .
This review is from a person who hired this attorney.
Hired attorney

I hired Mr. Factor after going through three different lawyers. He was the first attorney that I felt had my best interest in mind. He tells you the battles that are worth fighting over and which ones are trivial. He is straight forward with his answers that ultimately save you court costs and legal expenses. I would highly recommended to represent you in all family law matters.
This review is from a person who hired this attorney.
Hired attorney
See all reviews

I have had several cases against Max as opposing counsel. He is very knowledgeable on divorce and family law cases and an exceptional advocate for his clients. He is also practical and reasonable, and helps families reach real working solutions.

I endorse this lawyer. I've known Mr. Factor for twenty years. He is not only a consummate professional, but an intelligent, well-prepared and aggressive lawyer. Mr. Factor is personable and well-respected in the legal community.

Having worked with Mr. Factor as opposing counsel in a family law case, I can endorse him as an attorney who works hard to secure his clients' interests.

I had the pleasure of working with Max Factor for over two years at a previous law firm. He is a great attorney and works diligently and tirelessly for his clients. I would not hesitate to retain him if I ever needed his services and would highly recommend him to all potential clients.

I'm pleased to have the opportunity to endorse Max Factor and highly recommend him - especially as a family law attorney.

I endorse this lawyer. Max Factor is thorough, experienced, innovative, and personable. He is a fine, professional practitioner that works his cases with care and good sense. I wholeheartedly endorse Max as an advocate and counselor.

I know Max Factor personally and professionally. He is focused, hard-working and dedicated to his craft. Anyone needing a family law lawyer would be well-served by seeking his counsel. I endorse him without reservation. I

John Bruzek, Divorce and separation Attorney on Mar 31, 2015
Relationship: Other

I endorse this lawyer wholeheartedly. I have known Max Factor for decades, since long before he became an attorney. He has always been an honorable person and hard working. Max exhibits those characteristics in the practice of law. . I am an attorney - and I use Max as my attorney in Florida and Georgia. I have and will, direct my family and friends, and clients, who may need legal service in Florida and Georgia to Max. I, and every person I have referred to Max are impressed with his work.

Mark Campbell, Divorce and separation Attorney on Mar 16, 2015
Relationship: Worked together on matter

Mr. Factor is an outstanding lawyer. I wholeheartedly endorse him.

I endorse Max for family law, insurance law and employment law. He is an effective advocate who is dedicated to getting results for his clients in the most efficient manner possible.

I endorse this lawyer. Max is very intelligent and experienced, as well as a tireless worker when it comes to fighting for people's rights. I would recommend Max to anyone who needs an attorney.

I endorse this lawyer. Max is an exceptional and capable attorney, and a true professional. Max has a refreshingly calm and in-control presence that makes him a pleasure to work with, and also earns the respect and cooperation of opposing attorneys. I consider him a guru in areas of fire investigation and fraud detection, and in general, any civil litigation matter. I would not hesitate to place my trust in him to handle a case of mine, or to refer a friend or colleague's case to him.

I endorse this lawyer. I had the honor and privilege of knowing and working with Max a few years ago. He was always very well prepared, and well versed in the current state of the law, as well as its nuances. He is hard working, intelligent, and articulate with exemplary litigation skills, and is an even better person I highly recommend Max as a litigator.

Max is a very bright and talented advocate for his clients. He gets results. I endorse this lawyer.