Have you been charged with a Criminal offense? The George McCranie Law Firm can help!

With offices in Douglas and Valdosta, Georgia DUI/Criminal Defense, Personal Injury and Immigration Lawyer George McCranie has gained fame throughout Georgia for his success in representing clients all over the state.  Whether defending professional athletes, families or college students, his aggressive style of defense has made him the "go to DUI and Criminal Defense attorney" in his area.  He has represented clients and has had great succes protecting his clients after they have been involved in serious accidents.  George works tirelessly to educate our families, children and friends on DUI/criminal defense, accidnet law and Immigration issues.  A former Georgia Assistant District Attorney, George has earned the respect and confidence of his clients through hard work and his aggressive representation of clients.

George has been seen on countless network television stations, including ABC, CBS, NBC, CW and FOX affiliates around the nation and has also been featured in USA Today.  He also served as a Producer of an award wining documentary film, Mi Casa Hogar, that reveals an in-depth look at the incredible story of the Casa Hogar children's home in Acapulco, Mexico.  The film has raised over one hundred and fifty thoushand dollars and has built a three story dormitory for the orphans.

George is the author of the #1 best-selling book "The Authority on DUI Defense" which was nominated a #1 Best-Seller in 2 categories in 2013.  He is also co-author of the #1 best-selling book "Protect & Defend."  In 2012, he was inducted into the "National Academy of Best-Selling Authors" where he was presented with a Golden Quilly Award.  His third #1 best selling book is The Authority on DUI Defense.  Since its publication it has been updated with a Second Edition in 2018. 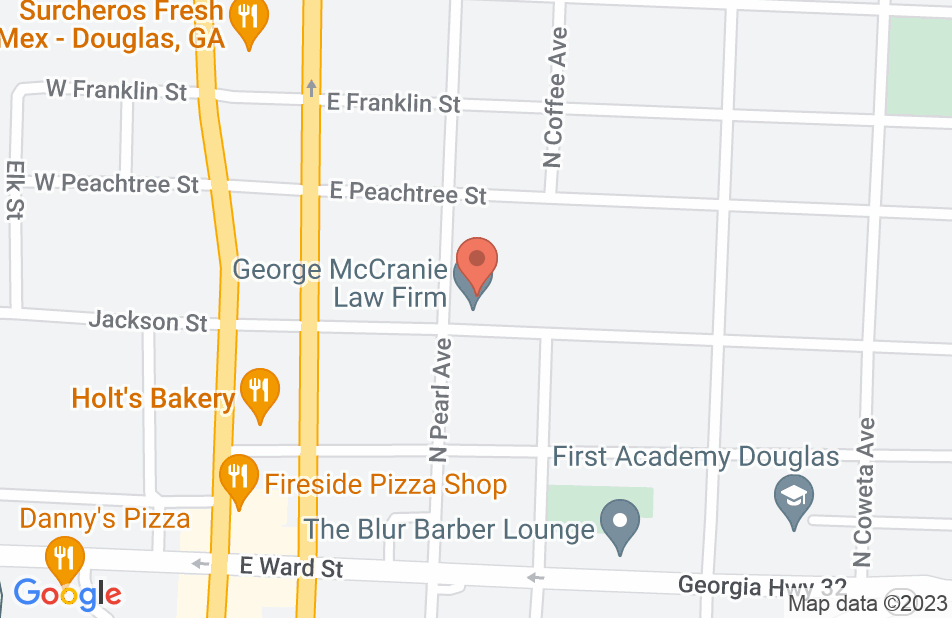 I could not have made a better choice

I could not have made a better choice! My sone had said to me long before I needed representation that if I ever needed a lawyer I was to call George McCranie. I did and I am very pleased, extremely pleased with the end result.

I have lived in nicholls my entire life, and all my family and friends call the Mccranie when they need an attorney, so i called and spoke to Alex which he ended up hooking me up with a free consultation in douglas. If u live in this area u know Police in Waycross are something else thats why its good to have a known experienced lawyer. Honestly wish i wasnt in this mess cause dealing with this is stresfull, but the Mccranie staff have been great firm overal so far. -Thanks
This review is from a potential client who consulted with this attorney.
Consulted attorney

Alex Patron has been nothing but a life saver It was great talking about my charges to him i didn't feel rushed or pressures at all and want to also say Ms. Damaris, She was of the most sweet, professional, and friendly. Overall Great Experience so i hired the law firm for having an experienced staff that can provide me with answers when needed. Thanks George Mccranie Law Firm Team
This review is from a person who hired this attorney.
Hired attorney

Thank you very much

Very happy with the firm and they always answer all my questions, Alex Patron wavied me a fee and mailed me a free book wanted to say thanks
This review is from a person who hired this attorney.
Hired attorney

Nothing but Great customer service

Thank you Alex Patron for active listening to my whole story and waiving that $300 fee on my confrence call loved how you provided friendly service. Nothing but Great customer service
This review is from a potential client who consulted with this attorney.
Consulted attorney

I called in regards for a divorce. A young Leagal assistant named Alex answered. He was very kind and helpful. He kindly told me they didn't have services and referred me to this site which helped me so much in finding an attorney that does. I would like to tell him thank you for the kindness/patience. It was greatly appreciated
This review is from a potential client who consulted with this attorney.
Consulted attorney

I would like to show my gratitude to the McCraine Law Firm Team and there outstanding job specially to Mrs. Cindy Gonzalez, Mrs. Lorie Corbitt and Ms. Sonia Tapia. The firm made sure I was informed in every step of my case and I could say I’m very great-full I chose them to stand behind my case. To everyone searching for a firm to help you with a DUI case, Criminal Defense, Immigration Case, I recommend The McCranie Law Firm to a high standard.
This review is from a person who hired this attorney.
Hired attorney

I would like to thank attorney McCranie Law Firm for helping me with my immigration status. The staff is always very nice and attentive to any questions I may have. What I liked the most is they keep you informed every step of the way in your case. I will highly recommend this law firm to friends and family. Thank You for all you do.
This review is from a person who hired this attorney.
Hired attorney
See all reviews

I am so impressed by George's commitment to excellence and grateful to have him on my roster - my short list - of referral sources. If one of my clients needed an excellent criminal defense or DUI lawyer, I would quickly send them his way. I wholeheartedly endorse this lawyer.

I recently began working on two cases in Coffee County, and George and his wife Danielle visited with me in their office. I would certainly refer any DUI or immigration matter in South Georgia to them. They have a great staff!

Mr. McCranie is a very hard-working and knowledgeable attorney who works hard to get his clients the results they want and deserve. I would consult with him if I had a criminal charge in his area, especially a DUI!

I endorse this lawyer. George McCranie is THE NAME in DUI defense in South Georgia.

I endorse this lawyer. George is an outstanding resource if you ever find yourself in need of his type of help. Don't hesitate to ask him for help.

I had the opportunity to meet Georgia at a national seminar. His knowledge was obvious. But what really stood out was his complete devotion to being the best Criminal and DUI attorney. We all strive to meet that standard. But George is already there!

George is a fantastic lawyer and advocate fort his clients. He's well respected by other lawyers and I have seen his growth and success for his clients over the years. Let Calhoun have the ball!

As a DUI/DWI attorney, I can safely say George knows his stuff. He get's unbelievable results for his clients. His attention to detail and compassion is exceptional. If a friend or family had a criminal or DUI/DWI issue in Georgia, I would tell them to speak to George and no one else.

Robert Doig, DUI and DWI Attorney on Dec 15, 2014
Relationship: Other

George is without a doubt the absolute best lawyer to handle your DUI or DWI case - he actually wrote the books (plural) on handling those types of cases. I wouldn't hesitate to refer a family member or close friend to George.

George is very passionate about providing the best defense possible for all of his clients. He is quite knowledgeable and thorough in everything he does. If I had a criminal or traffic problem in southern Georgia, I would definitely call George.

Georgia is the expert. I would have no hesitation in referring anyone to George. He will fight for your rights.

George always provides a thorough analysis of people's cases on the AVVO Q&A forum. His knowledge of the law and passion for helping his clients is apparent. I endorse him 100%.

I highly recommend George McCranie for any kind of criminal defense claim, including any arrest for Driving Under the Influence. He is the author of the #1 best-selling book "The Authority on DUI Defense." In addition to being the "go to" attorney if you have been arrested in Georgia, Mr. McCranie is one of the nicest and most genuine individuals you will ever meet. I can't say enough great things about the man.

Mark Blane, DUI and DWI Attorney on Apr 2, 2013
Relationship: Worked together on matter

I co-authored a best-selling book on Amazon entitled "Protect & Defend" with Mr. McCranie last year. His chapter focused on the "forgotten defense" on DUI arrests. I endorse this lawyer's work.

Chester Palumbo, DUI and DWI Attorney on Mar 16, 2013
Relationship: Worked together on matter

George is a leader in his field. George is the type of DUI attorney that younger attorneys strive to be like. If I or someone I loved were charged with a DUI in Georgia, George McCranie would be the first person I called. I HIGHLY recommend him.

I endorse this lawyer. Mr. Mccranie is an excellent trial lawyer. I have observed him as opposing counsel on many cases and found him to be thorough and effective with a great courtroom presence. I would recommend him as an attorney for any criminal or DUI case.

I endorse this lawyer. Attorney Mccrannie is the top criminal defense attorney in GA. He is the first and only attorney we would refer our clients to. He is a strong and zealous advocate for his clients and a credit to the legal profession. I highly recommend his legal services.