William C. Gentry: Securing Your Rights for over 30 years.

William C. ("Bill") Gentry has been practicing law in Georgia since 1986. His primary area of practice is family law cases, including divorce, high asset property division, child custody, and alimony cases. Bill served as President of the 1,000-member Cobb County Bar Association in 2001 and 2002. In 2012, Bill was elected to the Board of Governors of the State Bar of Georgia, the mandatory association that governs lawyers and the practice of law in Georgia. Bill has tried hundreds of cases in state and federal courts throughout Georgia, and he has argued dozens of appeals in both state and federal appellate courts in Georgia. He is admitted to and has argued in the Georgia Supreme Court and the Georgia Court of Appeals and the 11th Circuit U.S. Court of Appeals in Atlanta. Bill is also a member of the bar of the United States Supreme Court. He is a member of the Cobb County Bar Association, the State Bar of Georgia, the American Bar Association, and the Georgia Trial Lawyers Association, and he is a Fellow of the American Bar Foundation. Bill is a Phi Beta Kappa graduate of the University of Virginia's Economics Honors Program where he earned his BA degree in 1981. Bill earned his law degree from the University of Georgia in Athens in 1986. Bill is an active leader at Due West United Methodist Church in Marietta and has previously served as Chair of the Administrative Board, the Long Range Planning Committee, and the Staff Parish Relations Committee. 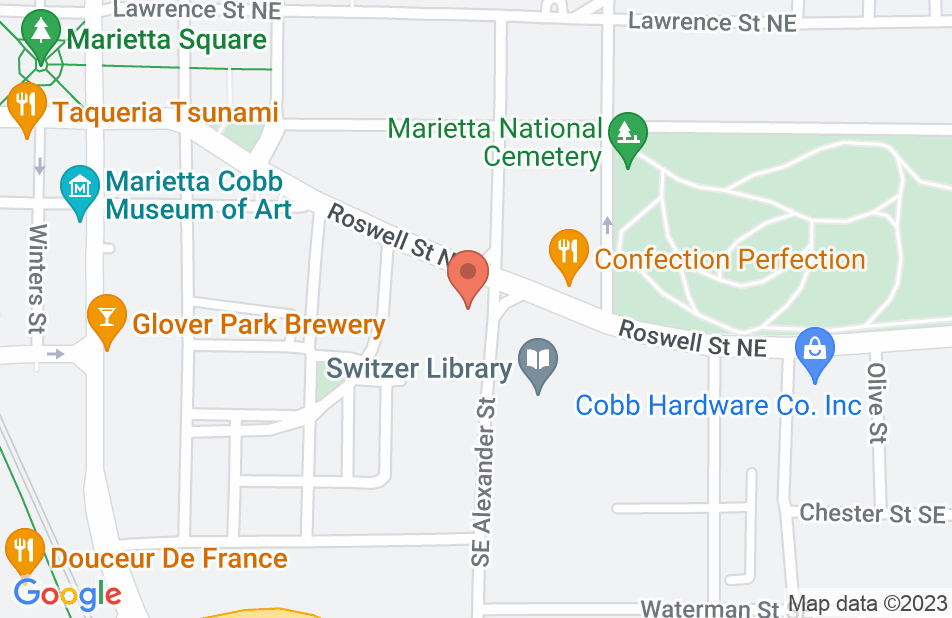 A Caring and Hardworking Divorce Attorney

Divorce is such a humbling and stressful experience that I'd hoped never to go through. I stepped into Bill's office the first time with trepidation and a feeling of defeat, but walked out determined and knowing he would represent me to the very best of his ability. Bill was with me when I first filled out paperwork, there to counsel me when needed along the way, and he was there the day I signed my divorce papers. I can honestly say he was with me every step of the way and I never felt otherwise. He and Danielle are not only extremely knowledgeable and helpful, but have a passion for their profession and care about their clients in a way that you do not see every day. This compassion is what really put their services above the rest and exceeded any expectations I had. Bill came very highly recommended from a close friend who went through a divorce and I will not hesitate to recommend him to others or retain his services if needed in the future.
This review is from a person who hired this attorney.
Hired attorney

Bill, I want to thank you, thank Danielle and all your staff for all your support and services. It's been a long and tough year, but fortunately it's over. Anyway, it was a pleasure meeting you and have you as my counsel throughout this hard and painful process. After having a different counsel for the first seven months of the case, I believed I made the right decision by replacing him with you. I appreciate the attention/professionalism shown by you and all your team. I cannot speak highly enough about you, you’re an excellent attorney and saw me through the case from start to finish. I won’t hesitate to call you or get your services again if I need to, and I definitely will recommend you to anyone who needs help with any divorce issues.
This review is from a person who hired this attorney.
Hired attorney

Everyone has a different story and set of circumstances that result in their decision to divorce. Arriving at this decision was the first major step for me. The second step was finding the right Attorney to lead me through the process. After reading the professional bio of Mr. Bill Gentry, I scheduled a consultation and shortly thereafter selected Mr. Gentry as my Attorney. From the very start, Mr. Gentry was mindful of the issues that were sensitive to me. He provided various scenarios based on his personal experiences with similar cases and clearly explained the law in layman’s terms. This allowed me to fully understand the process. Mr. Gentry and his staff provided timely responses to my phone calls and emails. I felt that I was always their number one priority. I realized during this process that certain things were out of my control and learned the art of patience as never before. My trust in Mr. Gentry guided me through the anxiety and frustrating moments. I followed his lead, stayed the course and we achieved the outcome he predicted some 13 months prior. Mr. Gentry and his team were exceptional and exceeded my expectations.

It is with great sadness one needs the services of a divorce attorney, but Mr. Gentry and his staff have provided me with a great service. In my case, things have been very complicated, yet Mr. Gentry and his team have been very supportive. He and his team have been able to work around my schedule, and even despite my distance from his office they have managed to do a great job keeping up with all our emails and phone conferences.

I have known Mr. Gentry as a colleague and friend in the legal community for may years. I know him to be an excellent attorney who is always well prepared for whatever his opposing counsel has in store. I endorse Mr. Gentry enthusiastically.

Brad Macdonald, Divorce and separation Attorney on May 7, 2013
Relationship: Fellow lawyer in community

I fully endorse Bill for his experience and character. Bill is an extremely intelligent, detail-oriented attorney who also happens to be very professional. His clients benefit tremendously from his skill in several different practice areas. I have and will continue to refer friends and family members to Bill.

I have known Bill Gentry for many years and have had the opportunity to oppose him in several cases and also see him work in court for his clients. He is very well-respected in the legal community, both for his skills and his ethics. He is extremely knowledgeable and experienced. I highly recommend him to any client, and it is my pleasure to endorse him.